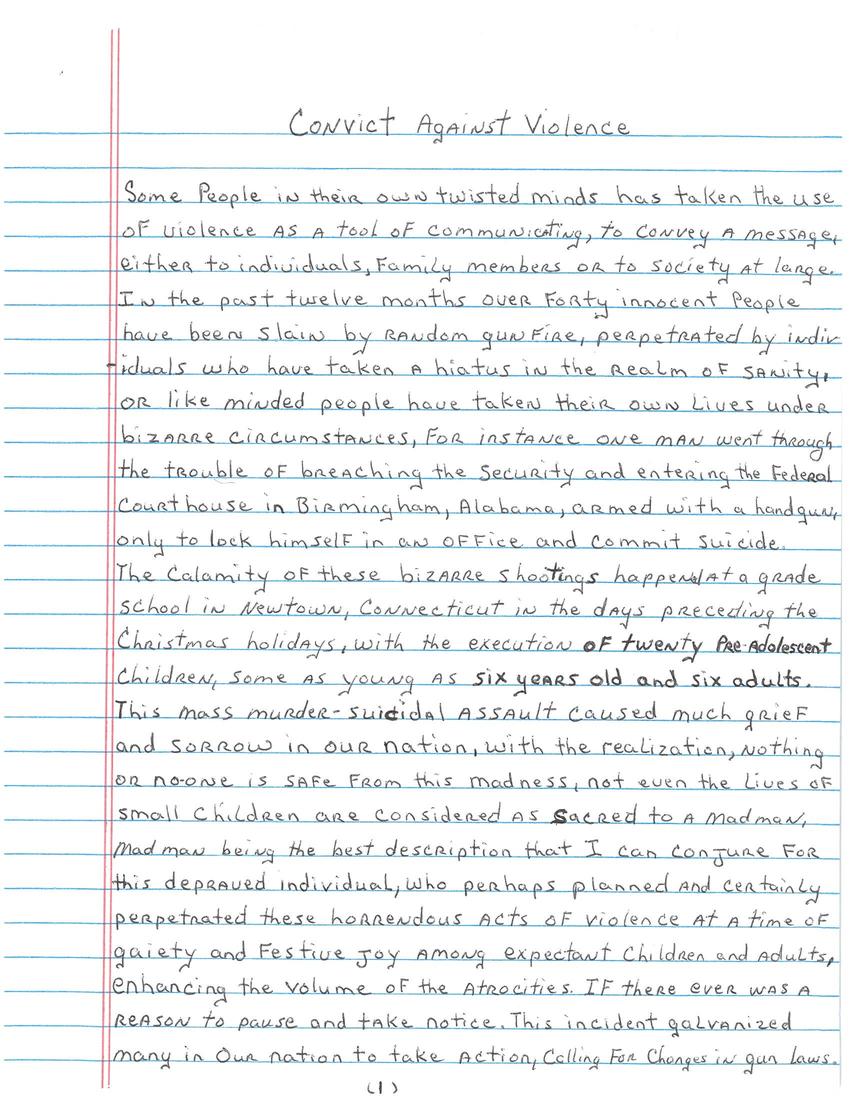 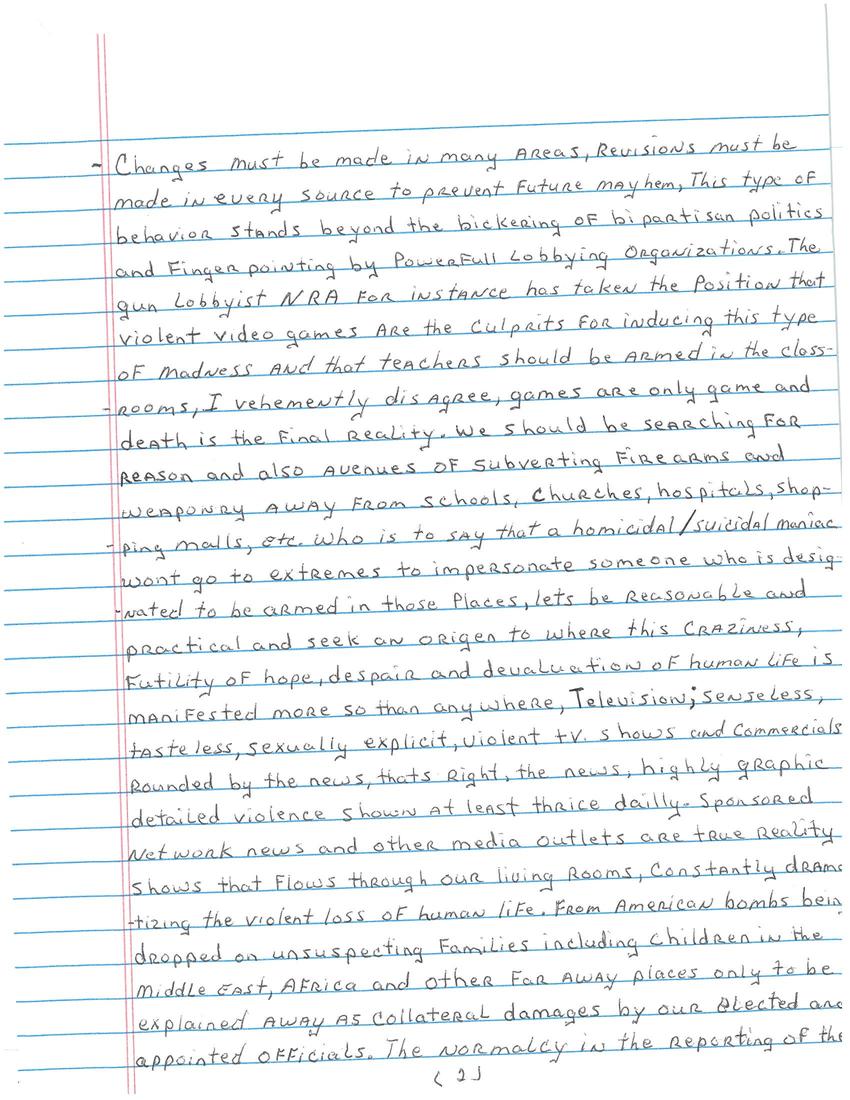 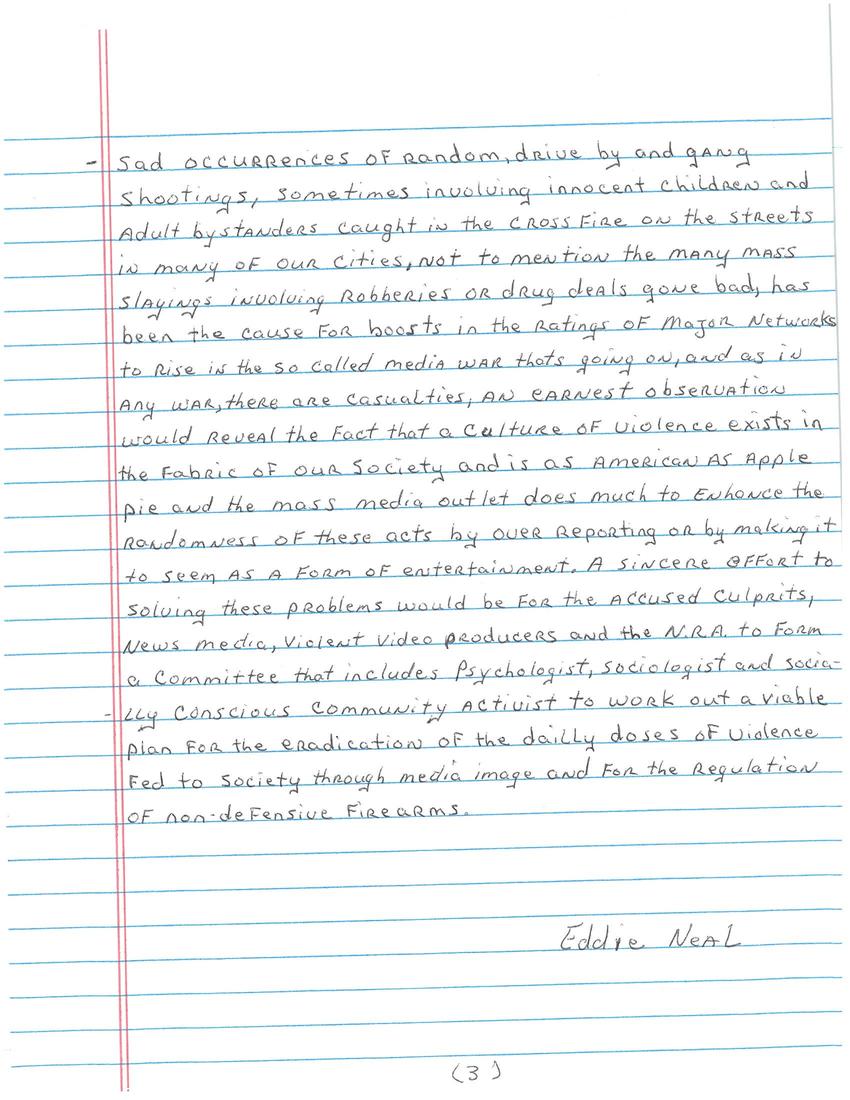 Some people in their own twisted minds have taken the use of violence as a tool of communicating, to convey a message, either to individuals, family members or to society at large. In the past twelve months over forty innocent people have been slain by random gunfire, perpetrated by individuals who have taken a hiatus in the realm of sanity, or like minded people have taken their own lives under bizarre circumstance. For instance, one man went through the trouble of breaching the security and entering the Federal Courthouse in Birmingham, Alabama, armed with a handgun, only to lock himself in an office and commit suicide. The calamity of these bizarre shootings happened at a grade school in Newtown, Connecticut in the days preceding the Christmas holidays, with the execution of twenty pre-adolescent children, some as young as six years old, and six adults. This mass murder-suicidal assault caused much grief and sorrow in our nation, with the realization, nothing or no-one is safe. From this madness, not even the lives of small children are considered as sacred to a madman, madman being the best description that I can conjure for this depraved individual, who perhaps planned and certainly perpetrated these horrendous acts of violence at a time of gaiety and festive joy among expectant children and adults, enhancing the volume of the atrocities. If there ever was a reason to pause and take notice, this incident galvanized many in our nation to take action, calling for changes in gun laws.

Changes must be made in many areas, revisions must be made in every source to prevent future mayhem, this type of behavior stands beyond the bickering of bipartisan politics and finger pointing by powerful lobbying organizations. The gun lobbyist NRA, for instance, has taken the position that violent video games are the culprits for inducing this type of madness and that teachers should be armed in the classrooms. I vehemently disagree, games are only games and death is the final reality. We should be searching for reason and also avenues of subverting firearms and weaponry away from schools, churches, hospitals, shopping malls, etc. Who is to say that a homicidal/suicidal maniac won't go to extremes to impersonate someone who is designated to be armed in those places? Let's be reasonable and practical and seek an origin to where this craziness, futility of hope, despair and devaluation of human life is manifested. More so than anyway, television; senseless, tasteless, sexually explicit, violent TV shows and commercials, rounded by the news, that's right, the news, highly graphic detailed violence shown at least thrice daily. Sponsored network news and other medial outlets are true reality shows that flows through our living rooms, constantly dramatizing the violent loss of human life. From American bombs being dropped on unsuspecting families including children in the Middle East, Africa and other far away places only to be explained away as collateral damages by our elected and appointed officials. The normalcy in the reporting of the sad occurrences of random drive by and gang shootings, sometimes involving innocent children and adult bystanders caught in the crossfire on the streets in many of our cities, not to mention the many mass slayings involving robberies or drug deals gone bad, has been the cause for boosts in the ratings of major networks to rise in the so called media war that's going on, and as in any war, there are casualties. An earnest observation would reveal the fact that a culture of violence exists in the fabric of our society and is as American as apple pie and the mass media outlet does much to enhance the randomness of these acts by over reporting or by making it to seem as a form of entertainment. A sincere effort to solving these problems would be for the accused culprits, news media, violent video producers and the N.R.A. to form a committee that includes psychologists, sociologists and socially conscious community activists to work out a viable plan for the eradication of the daily doses of violence fed to society through media images and for the regulation of non-defensive firearms.