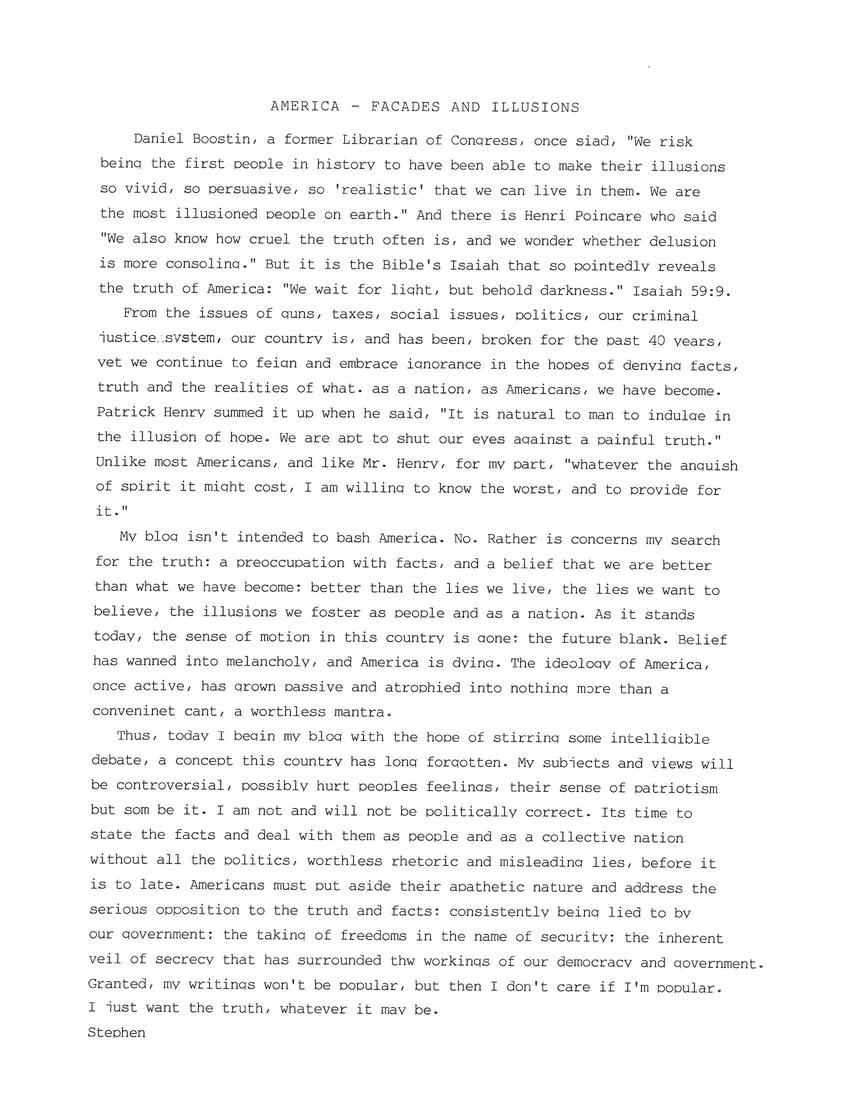 Daniel Boostin, a former Librarian of Congress, once said, "We risk being the first people in history to have been able to make their illusions so vivid, so persuasive, so "realistic" that we can live in them. We are the most illusioned people on earth." And there is Henri Poincare who said "We also know how cruel the truth often is, and we wonder whether delusion is more consoling." But it is the Bible's Isaiah that so pointedly reveals the truth of America: "We wait for light, but behold darkness." Isaiah 59:9.

From the issues of guns, taxes, social issues, politics, our criminal justice system, our country is, and has been, broken for the past 40 years, yet we continue to feign and embrace ignorance in the hopes of denying facts, truth and the realities of what, as a nation, as Americans, we have become. Patrick Henry summed it up when he said, "It is natural to man to indulge in the illusion of hope. We are apt to shut our eyes against a painful truth." Unlike most Americans, and like Mr. Henry, for my part, "whatever the anguish of spirit it might cost, I am willing to know the worst, and to provide for it."

My blog isn't intended to bash America. No. Rather it concerns my search for the truth; a preoccupation with facts, and a belief that we are better than what we have become; better than the lies we live, the lies we want to believe, the illusions we foster as people and as a nation. As it stands today, the sense of motion in this country is gone; the future blank. Belief has waned into melancholy, and America is dying. The ideology of America, once active, has grown passive and atrophied into nothing more than a convenient cant, a worthless mantra.

Thus, today I begin my blog with the hope of stirring some intelligible debate, a concept this country has long forgotten. My subjects and views will be controversial, possibly hurt people's feelings, their sense of patriotism but so be it. I am not and will not be politically correct. It's time to state the facts and deal with them as people and as a collective nation without all the politics, worthless rhetoric and misleading lies, before it is too late. Americans must put aside their apathetic nature and address the serious opposition to the truth and facts; consistently being lied to by our government; the taking of freedoms in the name of security; the inherent veil of secrecy that has surrounded the workings of our democracy and government. Granted, my writings won't be popular, but then I don't care if I'm popular. I just want the truth, whatever it may be.

I, too am very disillusioned with our government. We used to be the greatest nation, but now we are just a laughing stock and hated by the world. Even the ones we have saved from tyranny. Our only hope is that Jesus returns soon.