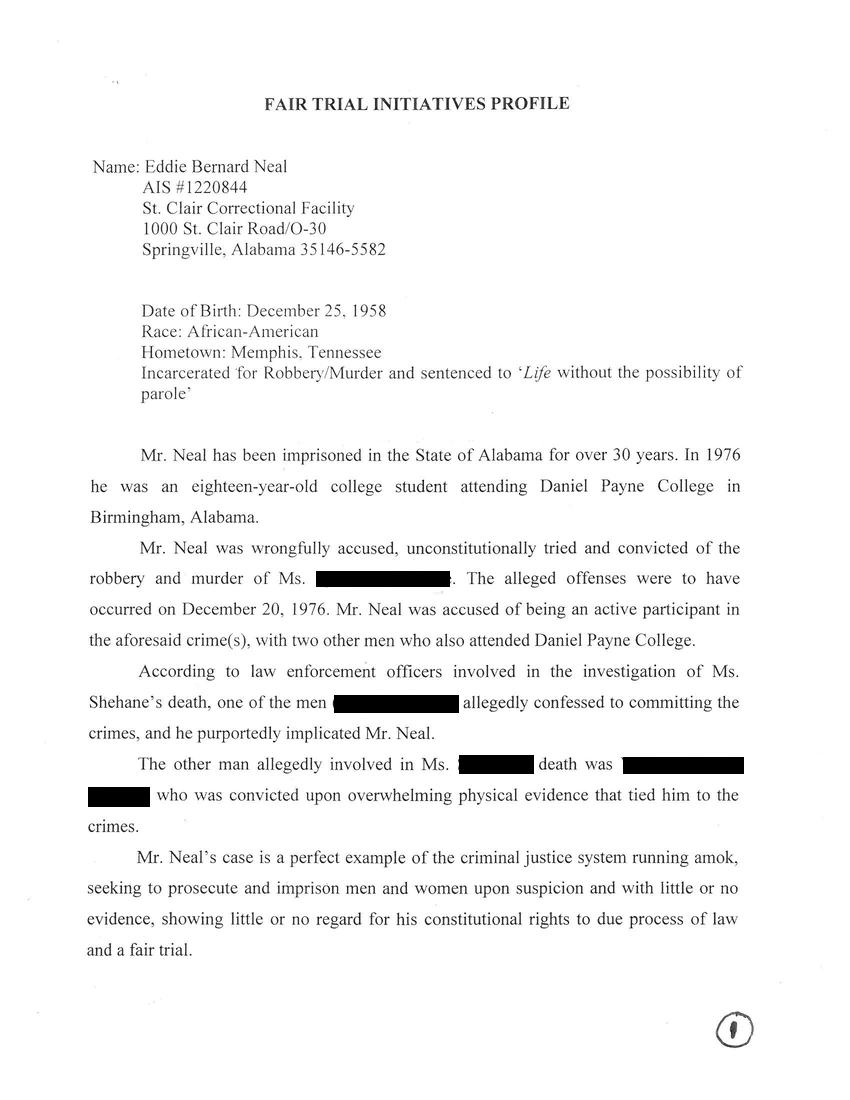 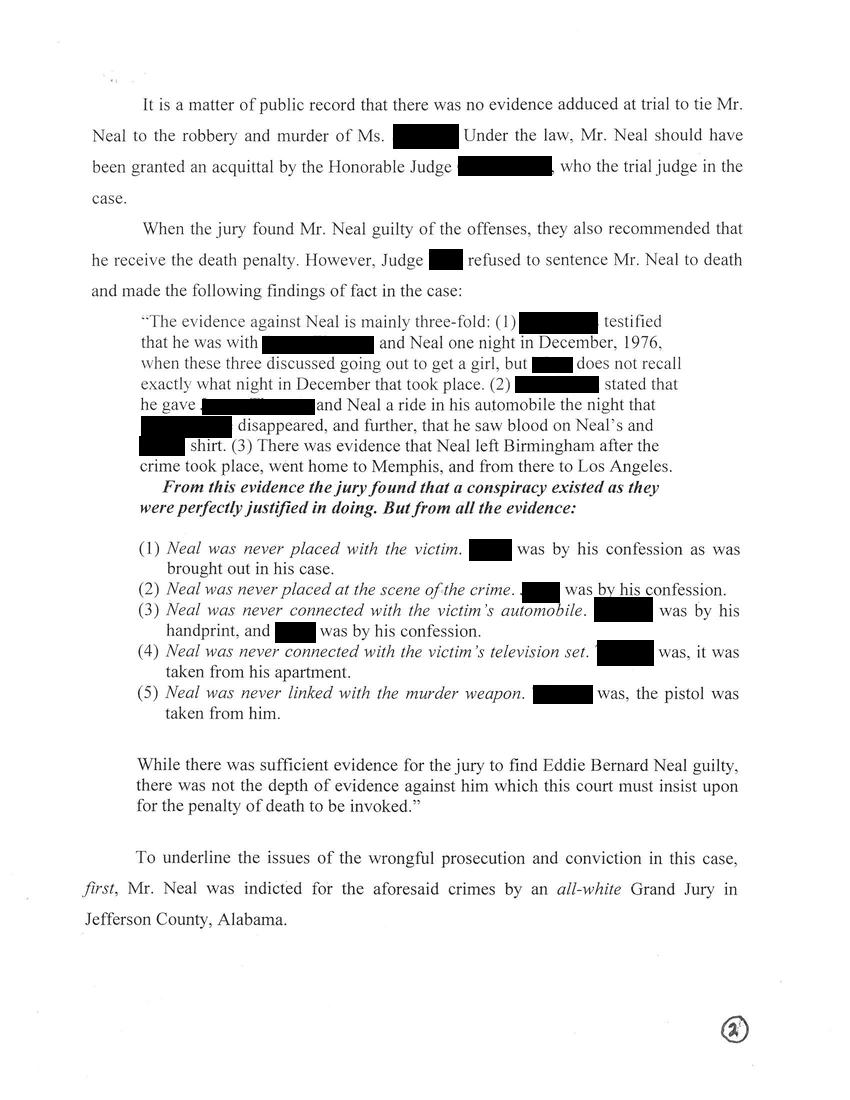 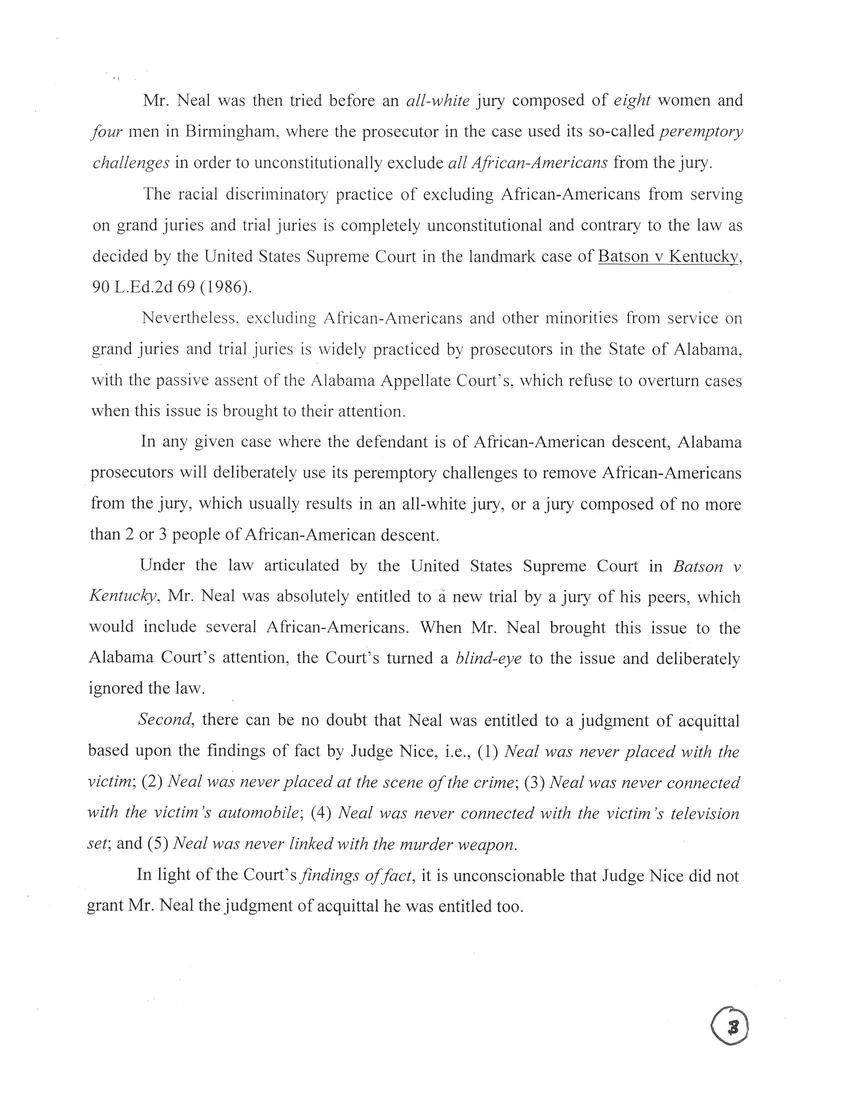 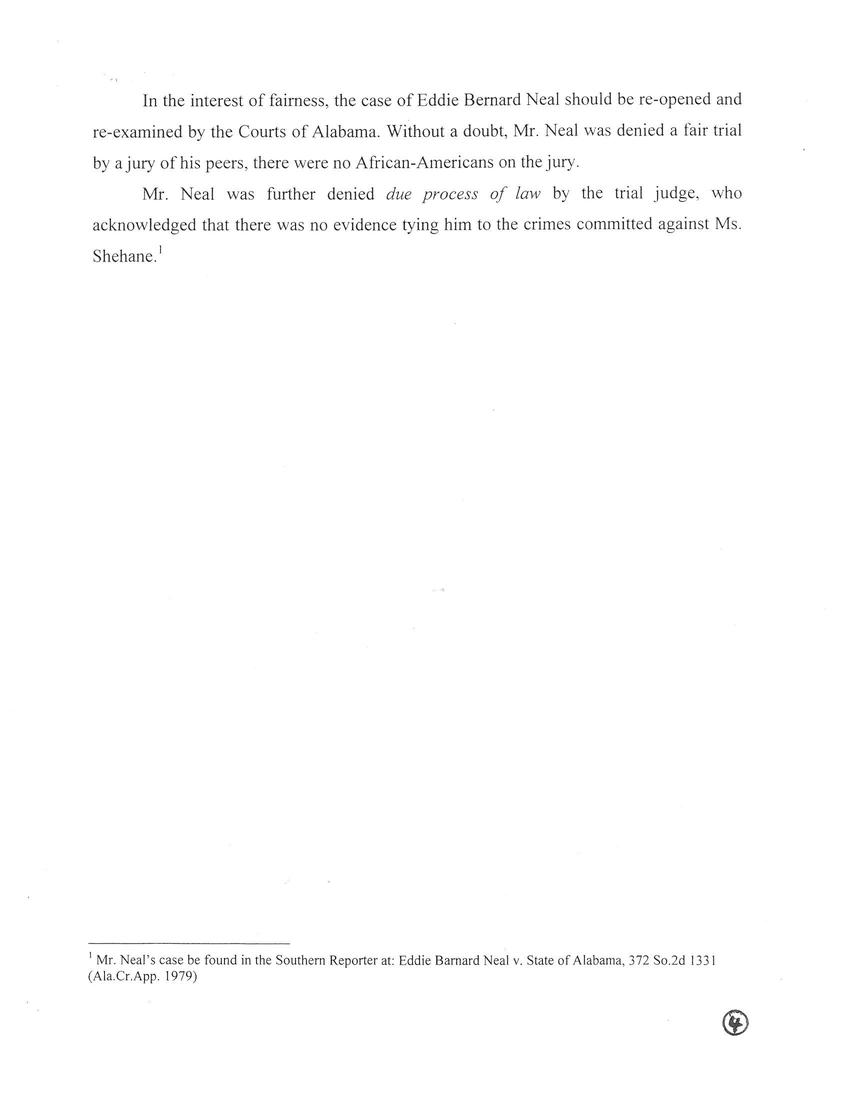 Date of Birth: December 25, 1958
Race: African-American
Hometown: Memphis, Tennessee
Incarcerated for Robbery/Murder and sentenced to 'Life without the possibility of parole'

Mr. Neal has been imprisoned in the State of Alabama for over 30 years. In 1976 he was an eighteen-year-old college student attending Daniel Payne College in Birmingham, Alabama.

Mr. Neal was wrongfully accused, unconstitutionally tried and convicted of the robbery and murder of Ms. [redacted]. The alleged offences were to have occurred on December 20, 1976. Mr. Neal was accused of being an active participant in the aforesaid crime(s), with two other men who also attended Daniel Payne College.

According to law enforcement officers involved in the investigation of Ms. Shehane's death, one of the men [redacted] allegedly confessed to committing the crimes, and he purportedly implicated Mr. Neal.

The other man allegedly involved in Ms. [redacted] death was [redacted] who was convicted upon overwhelming physical evidence that tied him to the crimes.

Mr. Neal's case is a perfect example of the criminal justice system running amok, seeking to prosecute and imprison men and women upon suspicious with little or no evidence, showing little or no regard for his constitutional rights to due process of law and a fair trial.

It is a matter of public record that there was no evidence adduced at trial to tie Mr. Neal to the robbery and murder of Ms. [redacted]. Under the law, Mr. Neal should have been granted acquittal by the Honorable Judge [readacted], who the trial judge in the case.

When the jury found Mr. Neal guilty of the offences, they also recommended that he receive the death penalty. However, Judge [redacted[ refused to sentence Mr. Neal to death and made the following findings of fact in the case:

From this evidence the jury found that a conspiracy existed as they were perfectly justified in doing. But from all the evidence:

While there was sufficient evidence for the jury to find Eddie Bernard Neal guilty, there was not the depth of evidence against him which this court must insist upon for the penalty of death to be invoked."

To underline the issues of the wrongful prosecution and conviction in the case, first, Mr. Neal was indicted for the aforesaid crimes by an all-white Grand Jury in Jefferson County, Alabama.

Mr. Neal was then tried before an all-white jury composed of eight women and four men in Birmingham, where the prosecutor in the case used its so called peremptory challenges in order to unconstitutionally exclude all African-Americans from the jury.

The racial discriminatory practice of excluding African-Americans from serving in grand juries and trial juries is completely unconstitutional and contrary to the law as decided by the Unite States Supreme Court in the landmark case of Batson v Kentucky 90 L.Ed.2d 69 (1986).

Nevertheless, excluding African-Americans and other minorities from service on grand juries and trial juries is widely practised by prosecutors in the State if Alabama, with the passive assent of the Alabama Appellate Courts, which refuse to overturn cases when this issue is brought to their attention.

Under the law articulated by the United States Supreme Court in Batson b Kentucky, Mr. Neal was absolutely entitled to a new trial by a jury of his peers, which would include several African-Americans. When Mr. Neal brought this issue to the Alabama Court's attention, the courts turned a blind-eye to the issue and deliberately ignored the law.

In light of the Court's findings of fact, it is unconscionable that Judge Nice did not grant Mr. Neal the judgement of acquittal he was entitled to.

In the interest of fairness, the case of Eddie Bernard Neal should be re-opened and re-examined by the Courts of Alabama. Without a doubt, Mr. Neal was denied a fair trial by a jury of his peers, there were no African-Americans on the jury.

Mr. Neal was further denied due process of law by the trial judge, who acknowledged that there was no evidence tying him to the crimes committed against Ms. Shehane.1