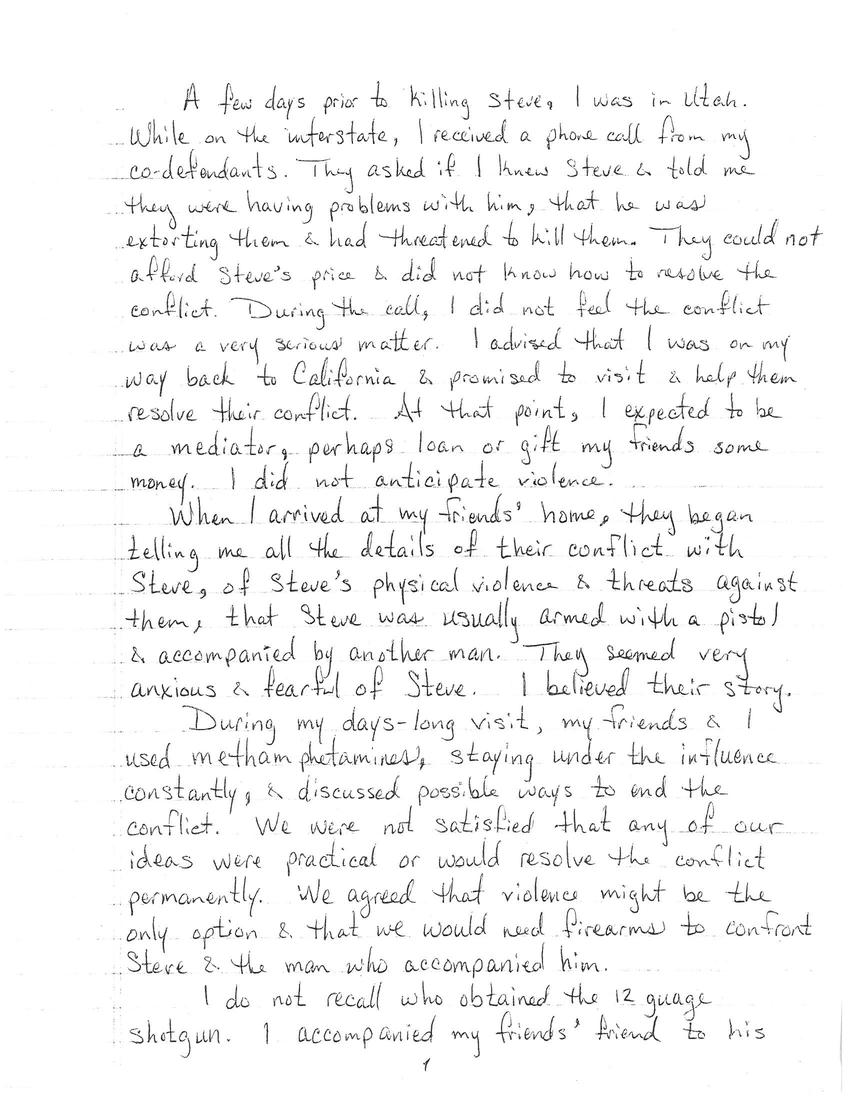 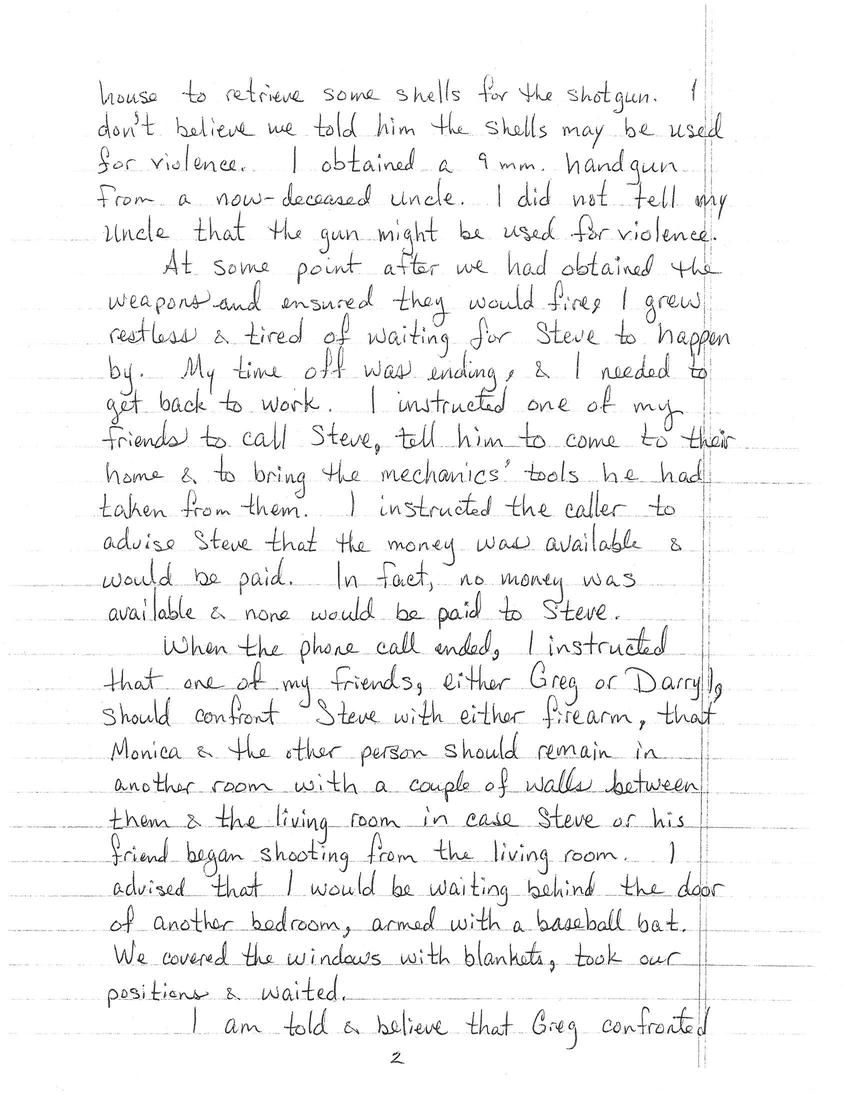 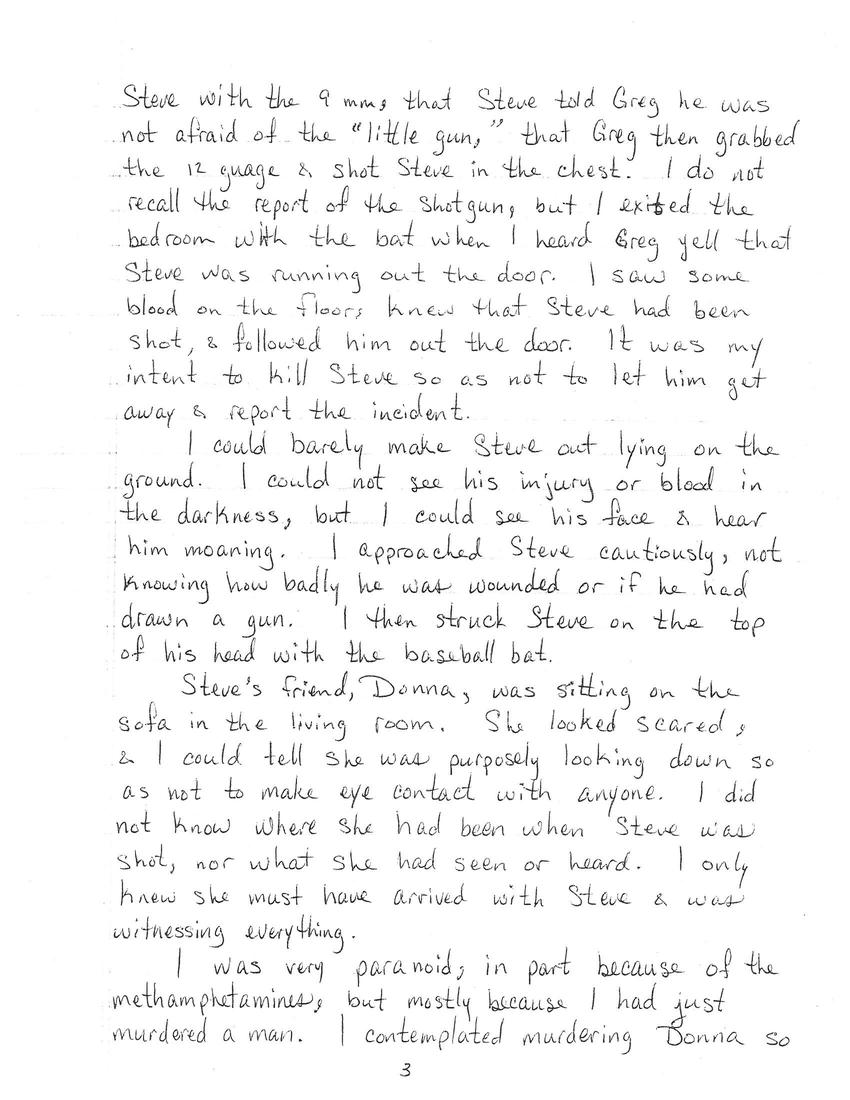 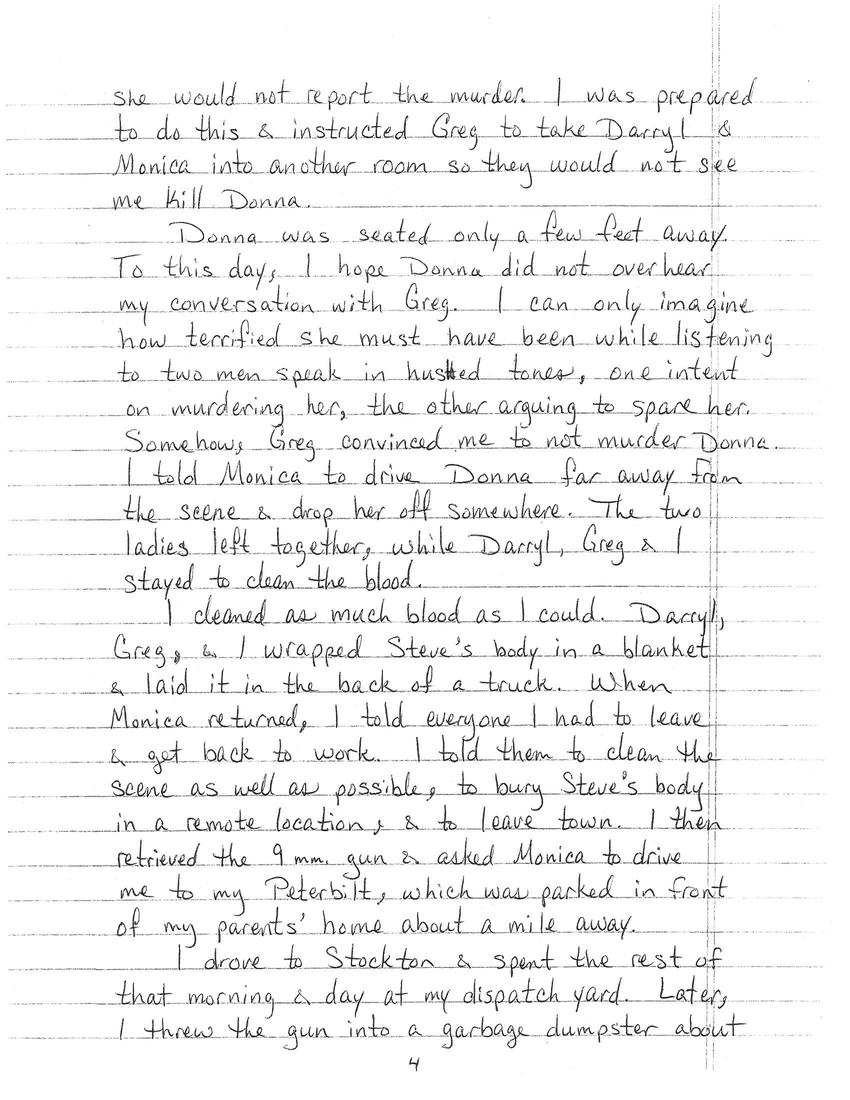 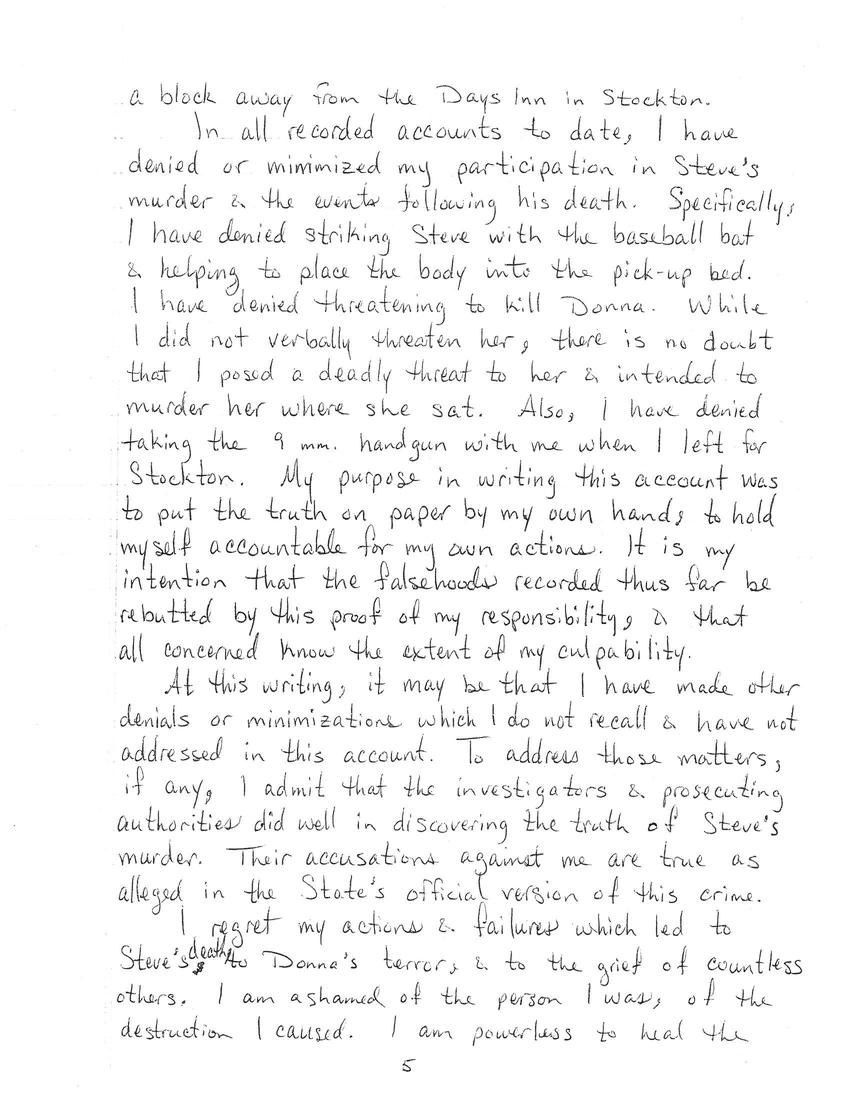 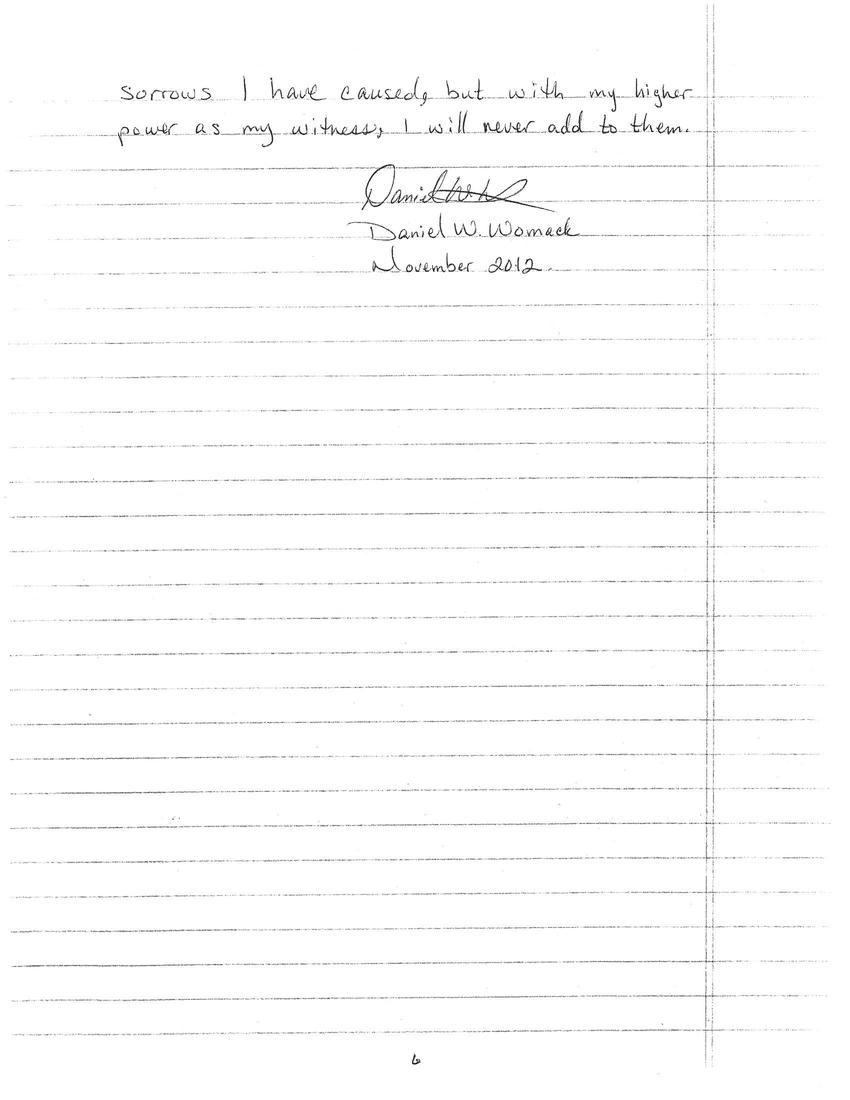 A few days prior to killing Steve, I was in Utah. While on the interstate, I received a phone call from my co-defendants. They asked if I knew Steve & told me they were having problems with him, that he was extorting them & had threatened to kill them. They could afford Steve's price & did not know how to resolve the conflict. During the call, I did not feel the conflict was a very serious matter. I advised that I was on my way back to California & promised to visit & help them resolve their conflict. At that point, I expected to be a mediator, perhaps loan or gift my friends some money. I did not anticipate violence.

When I arrived at my friends' home, they began telling me all the details of their conflict with Steve, of Steve's physical violence & threats against them, that Steve was usually armed with a pistol & accompanied by another man. They seemed very anxious & fearful of Steve. I believed their story.

During my days-long visit, my friend & I used meth-amphetamines, staying under the influence constantly, & discussed possible ways to end the conflict. We were not satisfied that any of our ideas were practical or would resolve the conflict permanently. We agreed that violence might be the only option & that we would need firearms to confront Steve & the man who accompanied him.

At some point after we had obtained the weapons and ensured they would & I grew restless & tired of waiting for Steve to happen by. My time off was ending, & I needed to get back to work. I instructed one of my friends to call Steve, tell him to come to their home & to bring the mechanics' tools he had taken from them. I instructed the caller to advise Steve that the money was available & would be paid. In fact, no money was available & none would be paid to Steve.

When the phone call ended, I instructed that one of my friends, either Greg or Darryl, should confront Steve with either firearm, that Monica & the other person should remain in another room with a couple of walls between them & the living room in case Steve or his friend began shooting from the living room. I advised that I would be waiting behind the door of another bedroom, armed with a baseball bat. We covered the windows with blankets, took our positions and waited.

I am told & believe that Greg confronted Steve with the 9mm, that Steve told Greg he was not afraid of the "little gun," that Greg then grabbed the 12 gauge and shot Steve in the chest. I do not recall the report of the shotgun, but I existed the bedroom with the bat when I heard Greg yell that Steve was running out the door. I saw some blood on the floor, knew that Steve had been shot, & followed him out the door. It was my intent to kill Steve so as not to let him get away & report the incident.

I could barely make Steve out lying on the ground. I could not see his injury or blood in the darkness, but I could see his face & hear him moaning. I approached Steve cautiously, not knowing how badly he was wounded or if he had drawn a gun. I then struck Steve on the top of his head with the baseball bat.

Steve's friend, Donna, was sitting on the sofa in the living room. She looked scared, & I could tell she was purposely looking down so as not to make eye contact with anyone. I did not know where she had been when Steve was shot, not what she had seen or heard. I only knew she must have arrived with Steve & was witnessing everything.

I was very paranoid, in part because of the methamphetamines, but mostly because I had just murdered a man. I contemplated murdering Donna so she would not report the murder. I was prepared to do this & instructed Greg to take Darryl & Monica into another room so they would not see me kill Donna.

Donna was seated only a few feet away. To this day, I hope Donna did not overheard my conversation with Greg. I can only imagine how terrified she must have been while listening to two mean speak in hushed tones, one intent on murdering her, the other arguing to spare her. Somehow, Greg convinced me to not murder Donna. I told Monica to drive Donna far away from the scene & drop her off somewhere. The two ladies left together, while Darryl, Greg & I stayed to clean the blood.

I cleaned as much blood as I could. Darryl, Greg & I wrapped Steve's body in a blanket & laid it in the back of a truck. When Monica returned, I told everyone I had to leave & get back to work. I told them to clean the scene as well as possible, to bury Steve's body in a remore location, & to leave town. I then retrieved the 9mm gun & asked Monica to drive me to my Peterbilt, which was parked in front of my parents' home about a mile away.

I drove to Stockton & spent the rest of that morning & day at my dispatch yard. Later, I threw the gun into a garbage dumpster about a block away from the Days Inn in Stockton.

In all recorded accounts to date, I have denied or minimised my participation in Steve's murder & the events following his death. Specifically, I have denied striking Steve with the baseball bat & helping to place the body into the pick-up bed. I have denied threatening to kill Donna. While I did not verbally threaten her, there is no doubt that I posed a deadly threat to her & intended to murder her where she sat. Also, I have denied taking the 9mm handgun with me when I left for Stockton. My purpose in writing this account was to put the truth on paper by my own hands, to hold myself accountable for my own actions. It is my intention that the falsehoods recorded thus far be rebutted by this proof of my responsibility, & that all concerned know the extent of my culpability.

At this writing, it may be that I have made other denials or minimisations which I do not recall & have not addressed in this account. To address those matters, if any, I admit that the investigators & prosecuting authorities did well in discovering the truth of Steve's murder. Their accusations against me are true as alleged in the State's official version of this crime.

I regret my actions & failures which led to Steve's death, to Donna's terror, & to the grief of countless others. I am ashamed of the person I was, of the destruction I caused. I am powerless to heal the sorrows I have caused, but with my higher power as my witness, I will never add to them.

I have subscribed to your posts. I found this blog on my travels around the net and I'm fascinated by the posts. Thank you for your brutal honesty here, it must have been difficult for such an apparently hardened guy to be so vulnerable and open. I want you to know that people are reading your stuff and thinking about you. You inspired me today.