The Tangible Act Of Listening

Reply ✍ Transcribed
From Straight Out Of The Play Pen And Into The State Pen by Donnell Drinks (author's profile)
Share this:
uploaded Feb. 23, 2013.  Original (PDF) 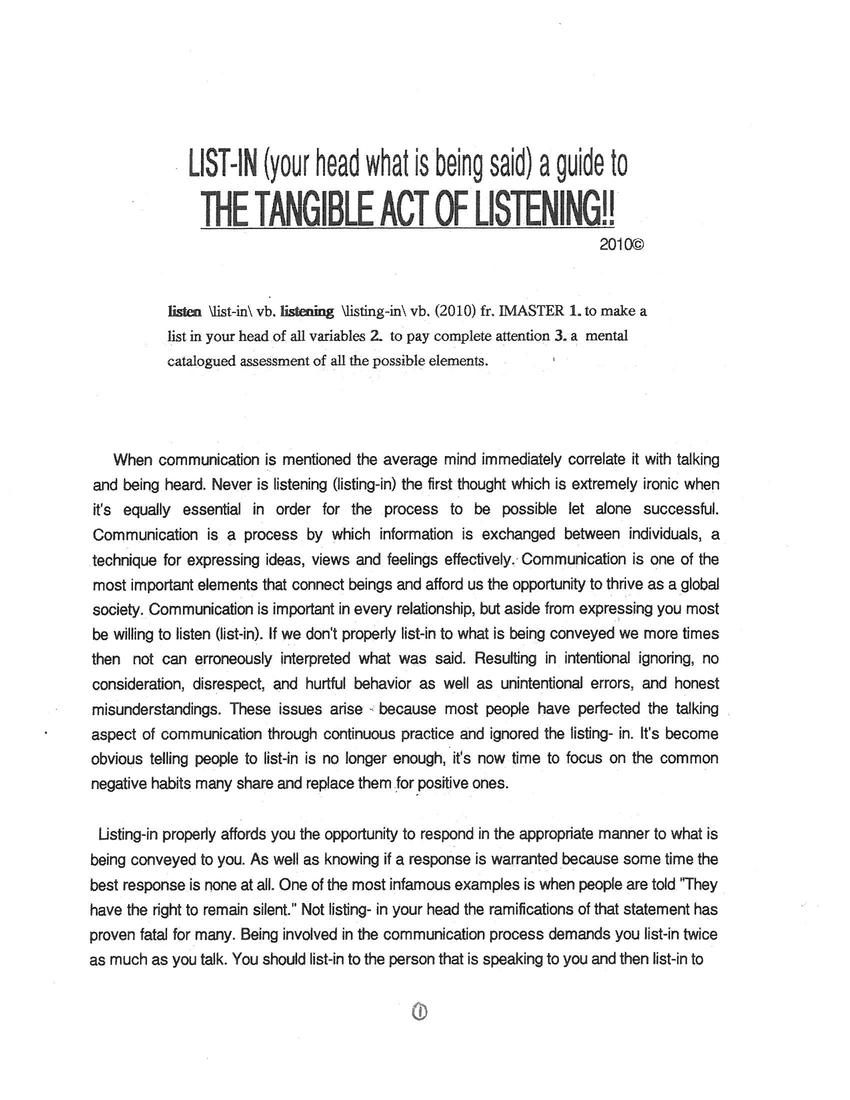 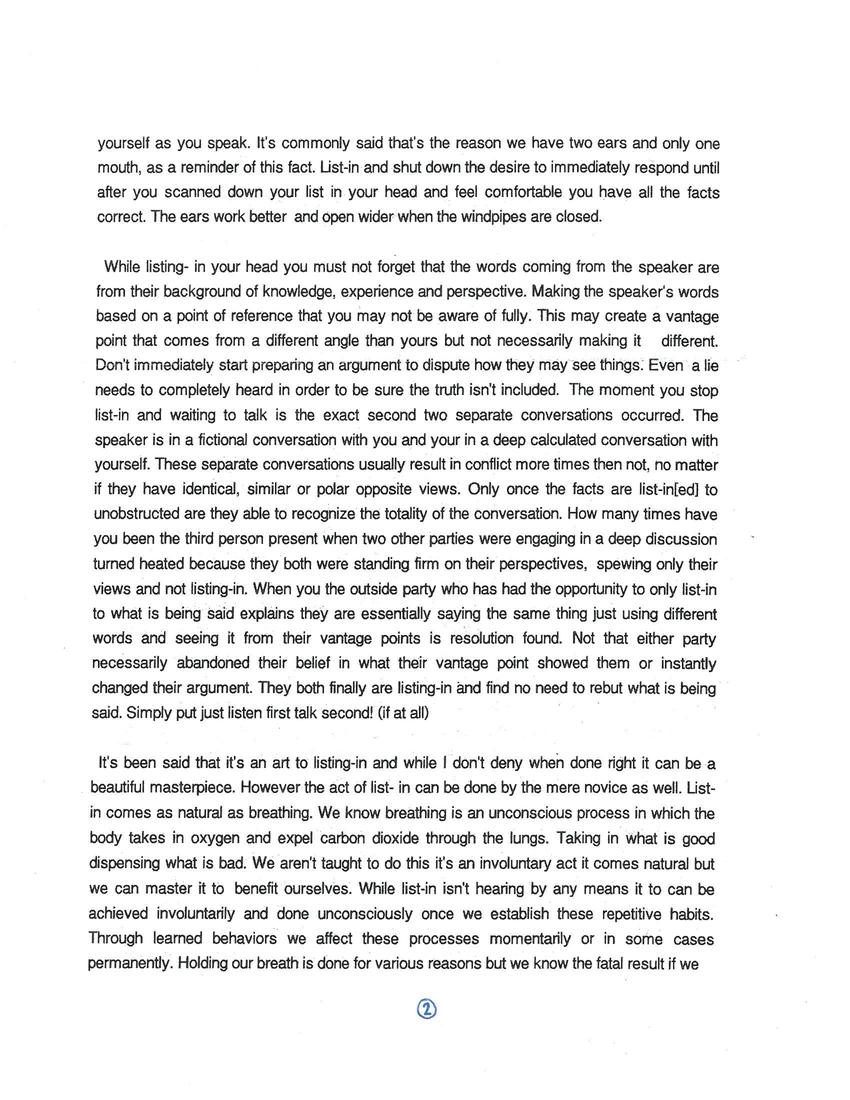 LIST-IN (your head what is being said) a guide to THE TANGIBLE ACT OF LISTENING!!
Copyright 2010

listen \list-in\ vb. listening \listing-in\ vb. (2010) fr. IMASTER 1. to make a list in your head of all variables 2. to pay complete attention 3. a mental catalogued assessment of all the possible elements.

When communication is mentioned the average mind immediately correlates it with talking and being heard. Never is listening (listing-in) the first thought which is extremely ironic when it's equally essential in order for the process to be possible let alone successful. Communication is a process by which information is exchanged between individuals, a technique for expressing ideas, views and feelings effectively. Communication is one of the most important elements that connect beings and afford us the opportunity to thrive as a global society. Communication is important in every relationship, but aside from expressing you must be willing to listen (list-in). If we don't properly list-in to what is being conveyed we more times than not can erroneously interpret what was said. Resulting in intentional ignoring, no consideration, disrespect, and hurtful behavior as well as unintentional errors, and honest misunderstandings. These issues arise because most people have perfected the talking aspect of communication through continuous practice and ignored the listing-in. It's become obvious telling people to list-in is no longer enough, it's now time to focus on the common negative habits many share and replace them for positive ones.

Listing-in properly affords you the opportunity to respond in the appropriate manner to what is being conveyed to you. As well as knowing if a response is warranted because sometimes the best response is none at all. One of the most infamous examples is when people are told "They have the right to remain silent." Not listing-in your head the ramifications of that statement has proven fatal for many. Being involved in the communication process demands you list-in twice as much as you talk. You should list-in to the person that is speaking to you and then list-in to yourself as you speak. It's commonly said that's the reason we have two ears and only one mouth, as a reminder of this fact. List-in and shut down the desire to immediately respond until after you scanned down your list in your head and feel comfortable you have all the facts correct. The ears work better and open wider when the windpipes are closed.

While listing-in your head you must not forget that the words coming from the speaker are from their background of knowledge, experience and perspective. Making the speaker's words based on a point of reference that you may not be aware of fully. This may create a vantage point that comes from a different angle than yours but not necessarily making it different. Don't immediately start preparing an argument to dispute how they may see things. Even a lie needs to be completely heard in order to be sure the truth isn't included. The moment you stop list-in and waiting to talk is the exact second two separate conversations occurred. The speaker is in a fictional conversation with you and you're in a deep calculated conversation with yourself. These separate conversations usually result in conflict more times than not, no matter if they have identical, similar or polar opposite views. Only once the facts are list-in[ed] to unobstructed are they able to recognize the totality of the conversation. How many times have you been the third person present when two other parties were engaging in a deep discussion turned heated because they both were standing firm on their perspectives, spewing only their views and not listing-in. When you the outside party who has had the opportunity to only list-in to what is being said explains they are essentially saying the same thing just using different words and seeing it from their vantage points is resolution found. Not that either party necessarily abandoned their belief in what their vantage point showed them or instantly changed their argument. They both finally are listing-in and find no need to rebut what is being said. Simply put just listen first talk second! (if at all)

It's been said that it's an art to listing-in and while I don't deny when done right it can be a beautiful masterpiece. However the act of list-in can be done by the mere novice as well. List-in comes as natural as breathing. We know breathing is an unconscious process in which the body takes in oxygen and expels carbon dioxide through the lungs. Taking in what is good, dispensing what is bad. We aren't taught to do this, it's an involuntary act, it comes natural but we can master it to benefit ourselves. While list-in isn't hearing by any means it too can be achieved involuntarily and done unconsciously once we establish these repetitive habits. Through learned behaviors we affect these processes momentarily or in some cases permanently. Holding our breath is done for various reasons but we know the fatal result if we don't allow the natural occurrence to continue. Instead we practice ways to increase and extend our breathing patterns because it's benefits in it for us. We should strive to accomplish the same when it comes the act of listing-in. Finding ways to absorb more of what is being conveyed to you. Improving this process can benefit us and others, obstructing the process can prove fatal. It's commonly known preventing the process of breathing will result in tragic consequences. Since automatic physical death isn't the result of not listing-in we often relegate listing-in to lesser importance. Which is a mistake, since through listing-in we come to many conclusions that can impact our physical health.

When we understand and start viewing to list-in is to be aggressive (pro-action), instead of looking at it as being passive (reactionary) then it will be easier to develop these habits. Accepting this perspective places the same level of responsibility on yourself regardless of the person, place or thing that is conveying information. If you instantly start your list-in your head of what points are being received and what points warrant a response from you this lessens the chance of miscommunication. Making such a list in your head will effectively allow you to respond accurately, appropriately and become habit forming. This list should not be exclusive to what is verbally said but also the tone in which it's said, the body language of the speaker at the time it's said and the vibes emanating from their aura. All factors that should be considered if you're listing-in correctly since these things can adjust the meaning of the words. Once you compile the list in your head repeat what has been said to make sure you heard the speaker correctly. Many times you'll find misunderstandings lie in what you thought was meant instead of what was intended. Then proceed to scan your list of what you wish to say, incorporate the two and then speak.