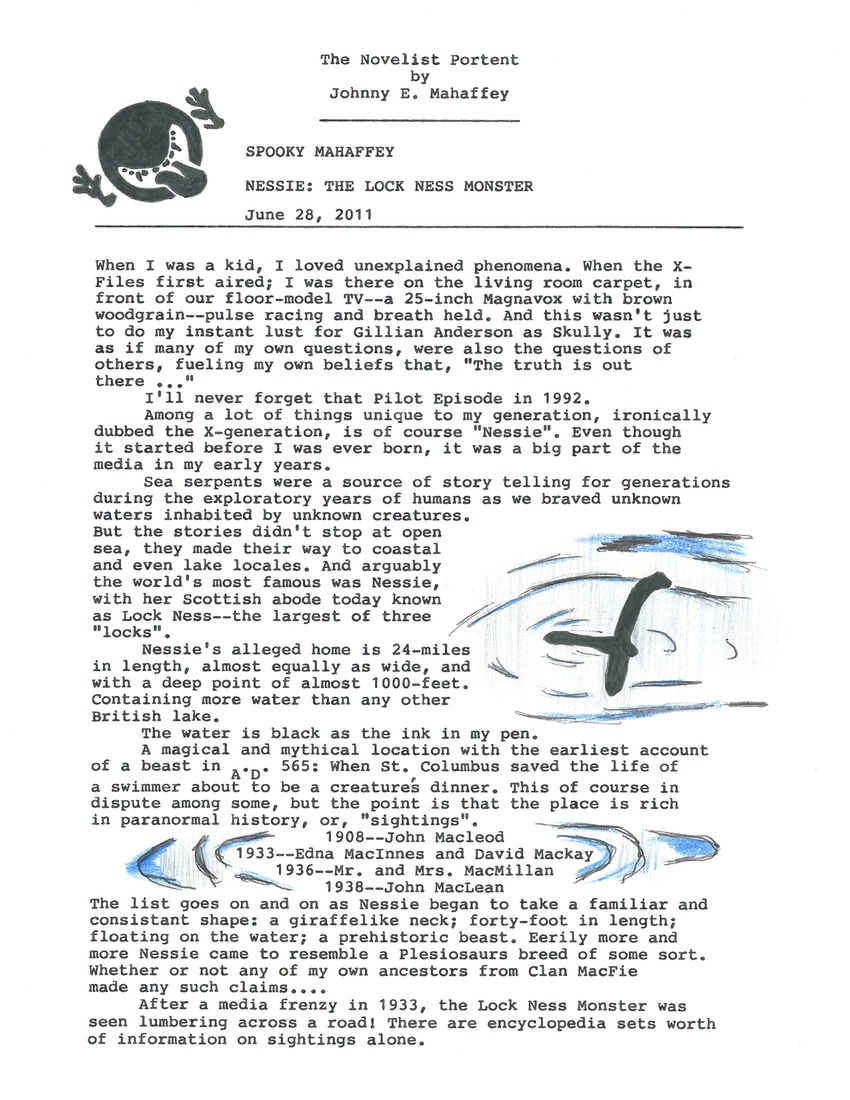 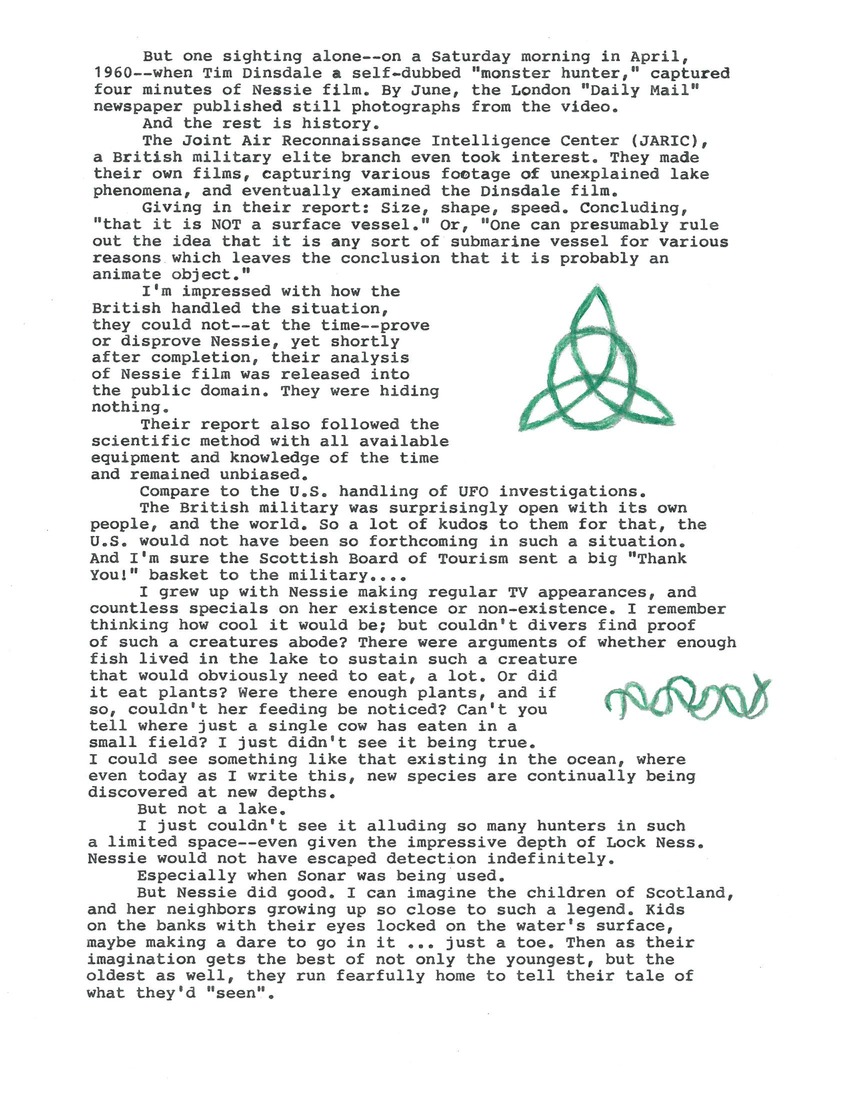 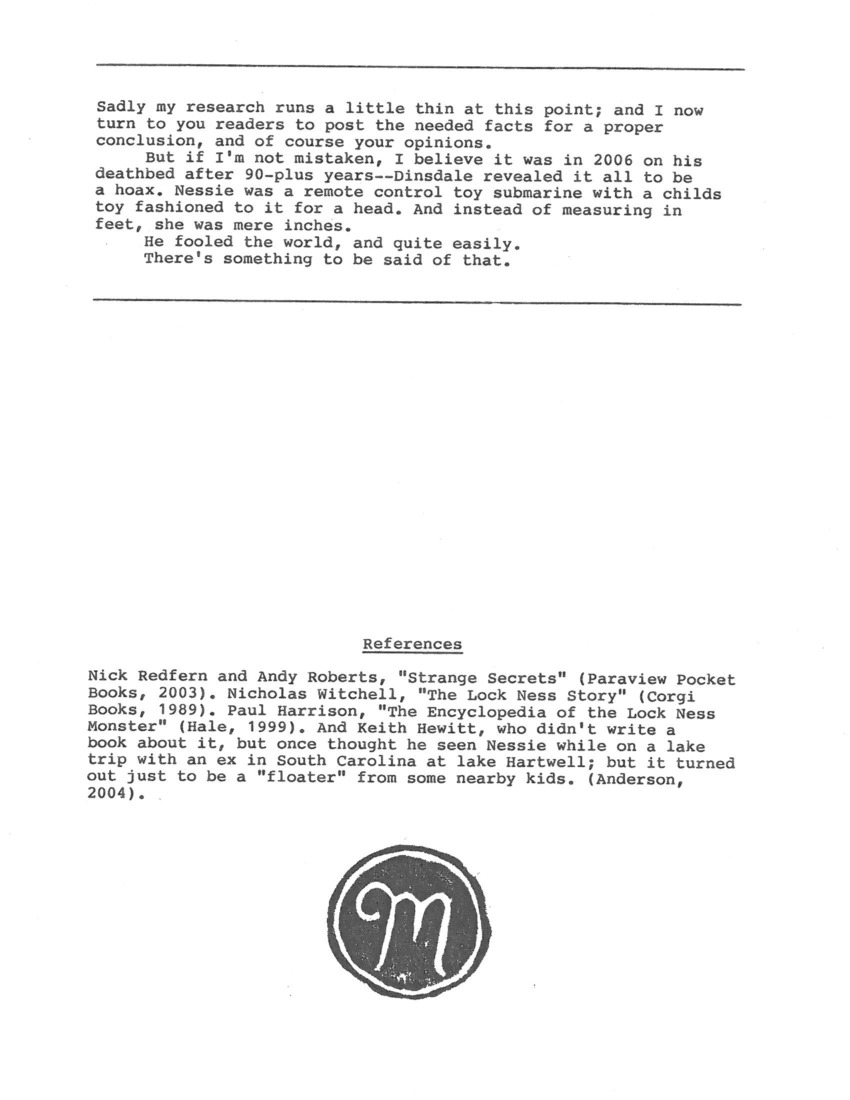 When I was a kid, I loved unexplained phenomena. When the X-Files first aired; I was there on the living room carpet, in front of our floor-model TV -- a 25-inch Magnavox with brown woodgrain -- pulse racing and breath held. And this wasn't just to do my instant lust for Gillian Anderson as Skully. It was as if many of my own questions, were also the questions of others, fueling my own beliefs that, "The truth is out there..."
I'll never forger that Pilot Episode in 1992.
Among a lot of things unique to my generation, ironically dubbed the X-generation, is of course "Nessie". Even though it started before I was ever born, it was a big part of the media in my early years.
Sea serpents were a source of story telling for generations during the exploratory years of humans as we braved unknown waters inhabited by unknown creatures. But the stories didn't stop at open sea, they made their way to coastal and even lake locales. And arguably the world's most famous was Nessie, with her Scottish abode today known as Lock Ness--the largest of three "locks".
Nessie's alleged home is 24-miles in length, almost equally as wide, and with a deep point of almost 1000-feet. Containing more water than any other British lake.
The water is black as the ink in my pen.
A magical and mythical location with the earliest account of a beast in A.D. 565: When St. Columbus saved the life of a swimmer about to be a creatures dinner. This of course in dispute among some, but the point is that the place is rich in paranormal history, or, "sightings".
1908--John Macleod
1933--Edna MacInnes and David Mackay
1936--Mr. and Mrs. MacMillan
1938--John MacLean
The list goes on and on as Nessie began to take a familiar and consistent shape: a giraffe-like neck; forty-foot in length; floating on the water; a prehistoric beast. Eerily more and more Nessie came to resemble a Plesiosaurs breed of some sort. Whether or not any of my own ancestors from Clan McFie made any such claims....
After a media frenzy in 1933, the Lock Ness Monster was seen lumbering across a road! There are encyclopaedia sets worth of information on sightings alone.
But one sighting alone--on a Saturday morning in April, 1960--when Tim Dinsdale a self-dubbed "monster hunter," captured four minutes of Nessie film. By June, the London "Daily Mail" newspaper published still photographs from the video.
And the rest is history.
The Joint Air Reconnaissance Intelligence Center (JARIC), a British military elite branch even took interest. They made their own films, capturing various footage of unexplained lake phenomena, and eventually examined the Dinsdale film.
Giving in their report: Size, shape, speed. Concluding, "that it is NOT a surface vessel." Or, "One can presumably rule out the idea that it is any sort of submarine vessel for various reasons which leaves the conclusion that it is probably an animate object."
I'm impressed with how the British handled the situation, they could not--at the time--prove or disprove Nessie, yet shortly after completion, their analysis of Nessie film was released into the public domain. They were hiding nothing.
Their report also followed the scientific method with all available equipment and knowledge of the time and remained unbiased.
Compare to the U.S. handling of UFO investigations.
The British military was surprisingly open with its own people, and the world. So a lot of kudos to them for that, the U.S. would not have been so forthcoming in such a situation. And I'm sure the Scottish Board of Tourism sent a big "Thank You!" basket to the military....
I grew up with Nessie making regular TV appearances, and countless specials on her existence or non-existence. I remember thinking how cool it would be; but couldn't divers find proof of such a creatures abode? There were arguments of whether enough fish lived in the lake to sustain such a creature that would obviously need to eat, a lot. Or did it eat plants? Were there enough plants, and if so, couldn't her feeding be noticed? Can't you tell where just a single cow has eaten in a small field? I just didn't see it being true. I could see something like that existing in the ocean, where even today as I write this, new species are continually being discovered at new depths.
But not a lake.
I just couldn't see it alluding so many hunters in such a limited space--even given the impressive depth of Lock Ness. Nessie would not have escaped detection indefinitely.
Especially when Sonar was being used.
But Nessie did good. I can imagine the children of Scotland, and her neighbors growing up so close to such a legend. Kids on the banks with their eyes locked on the water's surface, maybe making a date to go in it ... just a toe. Then as their imagination gets the best of not only the youngest, but the oldest as well, they run fearfully home to tell their tale of what they'd "seen".

Sadly my research runs a little thin at this point; and I now turn to you readers to post the needed facts for a proper conclusion, and of course your opinions.
But if I'm not mistaken, I believe it was in 2006 on his deathbed after 90-plus years--Dinsdale revealed it all to be a hoax. Nessie was a remote control toy submarine with a child's toy fashioned to it for a head. And instead of measuring in feet, she was mere inches.
He fooled the world, and quite easily.
There's something to be said of that.

References
Nick Redfern and Andy Roberts, "Strange Secrets" (Paraview Pocket Books, 2003). Nicholas Witchell, "The Lock Ness Story" (Corgi Books, 1989). Paul Harrison, "The Encyclopaedia of the Lock Ness Monster" (Hale, 1999). And Keith Hewitt, who didn't write a book about it, but once thought he seen Nessie while on a lake trip with an ex in South Carolina at lake Hartwell; but it turn out just to be a "floater" from some nearby kids. (Anderson, 2004).