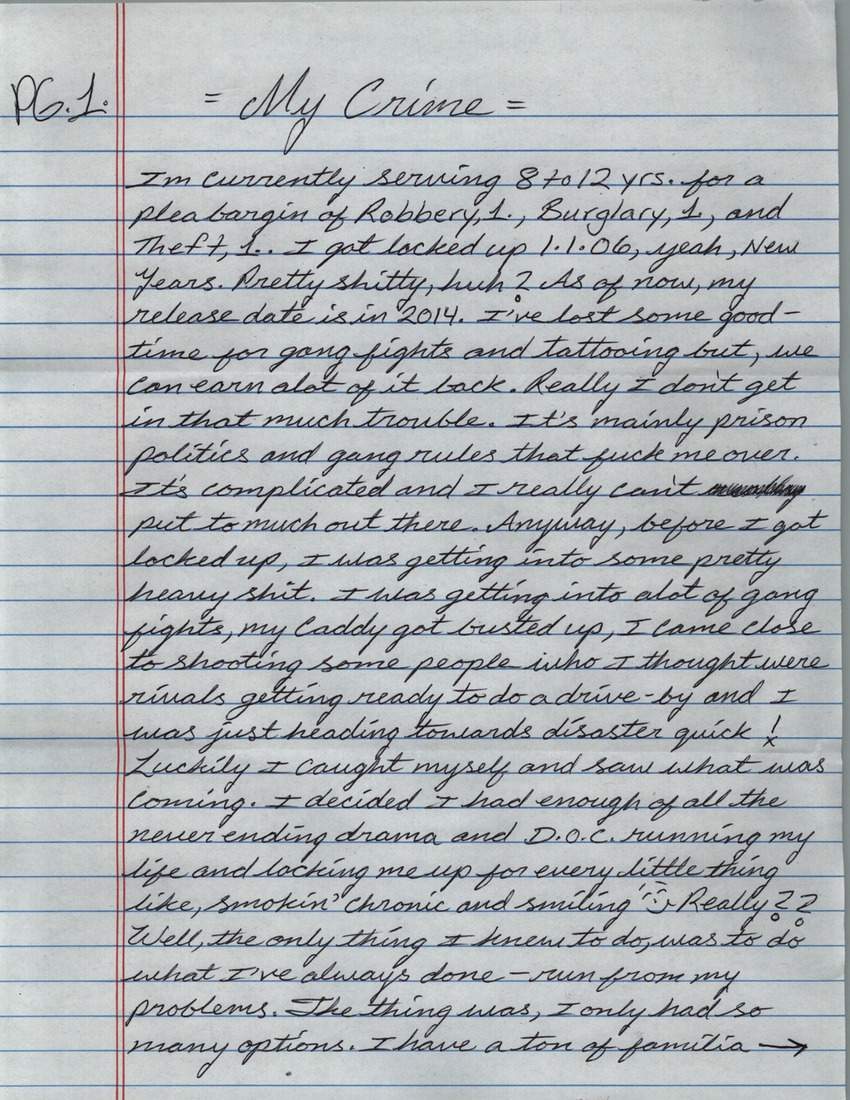 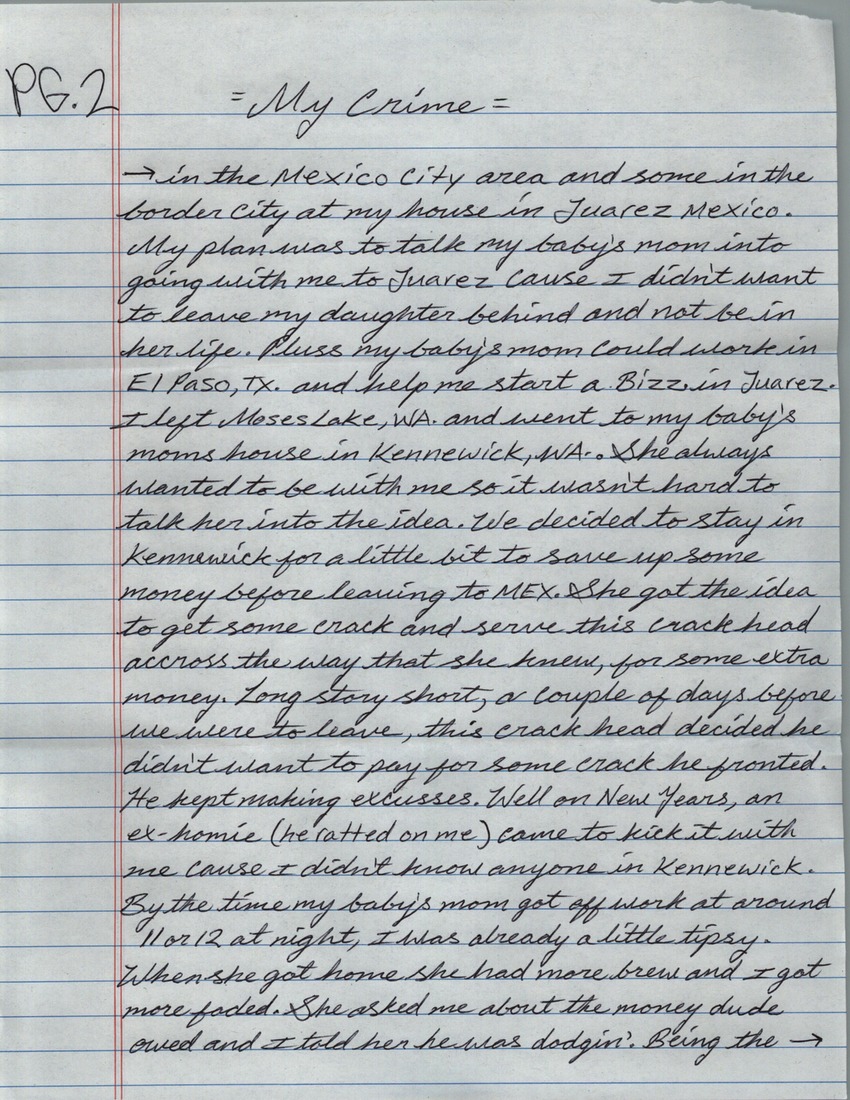 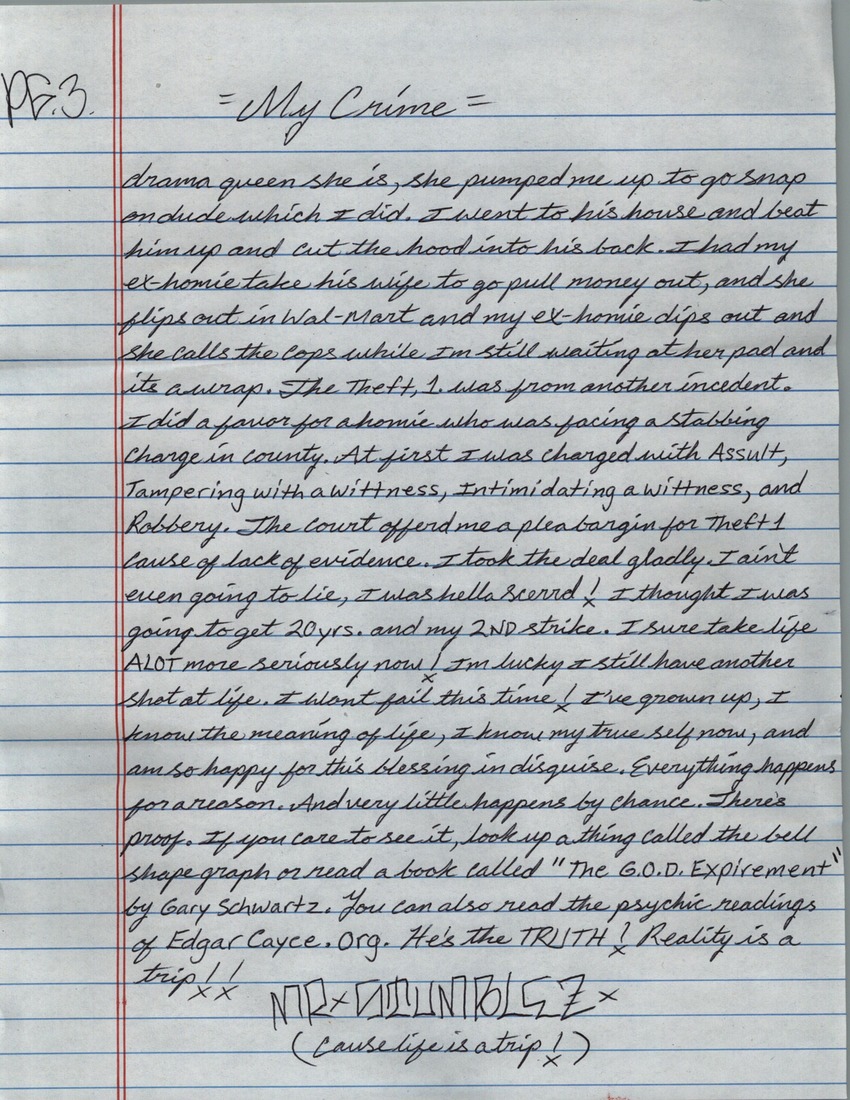 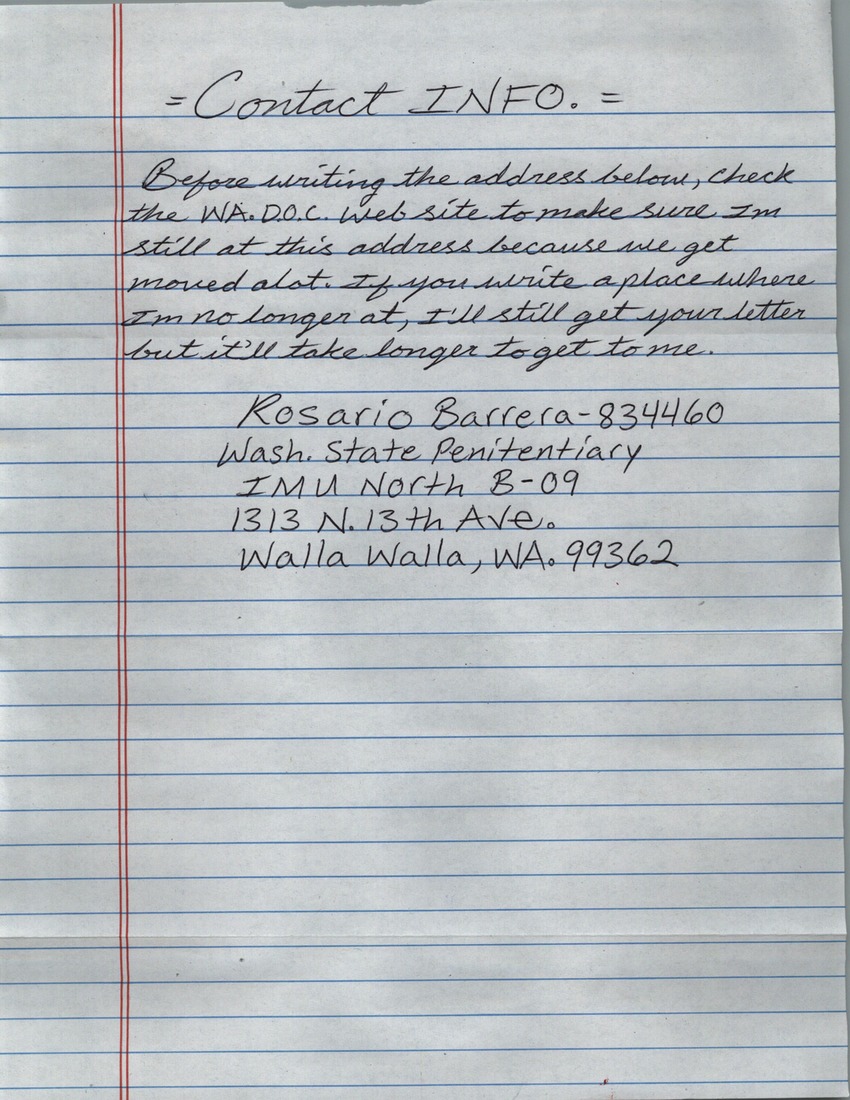 I'm currently serving 8 to 12 years for a plea bargain of robbery (1), burglary (1), and theft (1). I got locked up 1-1-06. Yeah, New Years. Pretty shitty, huh? As of now, my release date is 2014. I've lost some good time for gang fights and tattooing, but we can earn a lot of it back. Really, I don't get into that much trouble. It's mainly prison politics and gang rules that fuck me over. It's complicated, and I can't really put too much out there.

Anyway, before I got locked up, I was getting into a lot of gang fights. My caddy got busted up. I came close to shooting some people who I thought were rivals getting ready to do a drive-by, and I was just heading towards disaster quick! Luckily, I caught myself and saw what was coming. I decided I had enough of all the never-ending drama, and DOC running my life and locking me up for every little thing like smokin' chronic and smiling. :) Really?

Well, the only thing I knew to do was to do what I've always done—run from my problems. The thing was, I only had so many options. I have a ton of familia in the Mexico City area and some in the border city at my house in Juarez, Mexico. My plan was to talk my baby's mom into going with me to Juarez 'cause I didn't want to leave my daughter behind and not be in her life. Plus, my baby's mom could work in El Paso, TX and help me start a biz in Juarez. I left Moses Lake, MA and went to my baby's mom's house in Kennewick, WA. She always wanted to be with me so it wasn't hard to talk her into the idea.

We decided to stay in Kennewich for a little bit to save up some money before leaving for Mexico. She got the idea to get some crack and serve this crackhead across the way that she knew, for some extra money. Long story short, a couple of days before we were to leave, this crackhead decided he didn't want to pay for some crack he fronted. He kept making excuses.

Well, on New Years, an ex-homie (he ratted on me) came to kick it with me 'cause I didn't know anyone else in Kenneiwch. By the time my baby's mom got off work at around 11 or 12 at night, I was already a little tipsy. When she got home, she had more brew and I got more faded. She asked me about the money dude owed and I told her he was dodgin'. Being the drama queen she is, she pumped me up to go snap on dude, which I did. I went to his house and beat him up and cut the hood into his back. I had my ex-homie take his wife to go pull money out, and she flips out in Wal-Mart, and my ex-homie dips out and she calls the cops while I'm still waiting at her pad, and it's a wrap.

The theft, one, was from another incident. I did a favor for a homie who was facing a stabbing charge in county.

At first, I was charged with assault, tampering with a witness, intimidating a witness, and robbery. The court offered me a plea bargain for the theft 'cause of lack of evidence. I took the deal gladly. I ain't even going to lie, I was hella scared! I thought I was going to get 20 years and my second strike. I sure take life A LOT more serious now! I'm lucky I still have another shot at life. I won't fail this time! I've grown up, I know the meaning of life, I know my true self now, and I am so happy for this blessing in disguise.

Everything happens for a reason. And very little happens by chance. There's proof. If you can't see it, look up a thing called the bell shape graph or read a book called The G.O.D. Experiment by Gary Schwartz. You can also read the psychic readings of Edgarcayce.org. He's the truth! Reality is a grip!

Mr. Stumblez
('cause life is a trip!)

Contact Info
Before writing the address below, check the WA DOC website to make sure I'm still at this address because we get moved a lot. If you write a place where I'm no longer at, I'll still get your letter but it'll take longer to get to me.