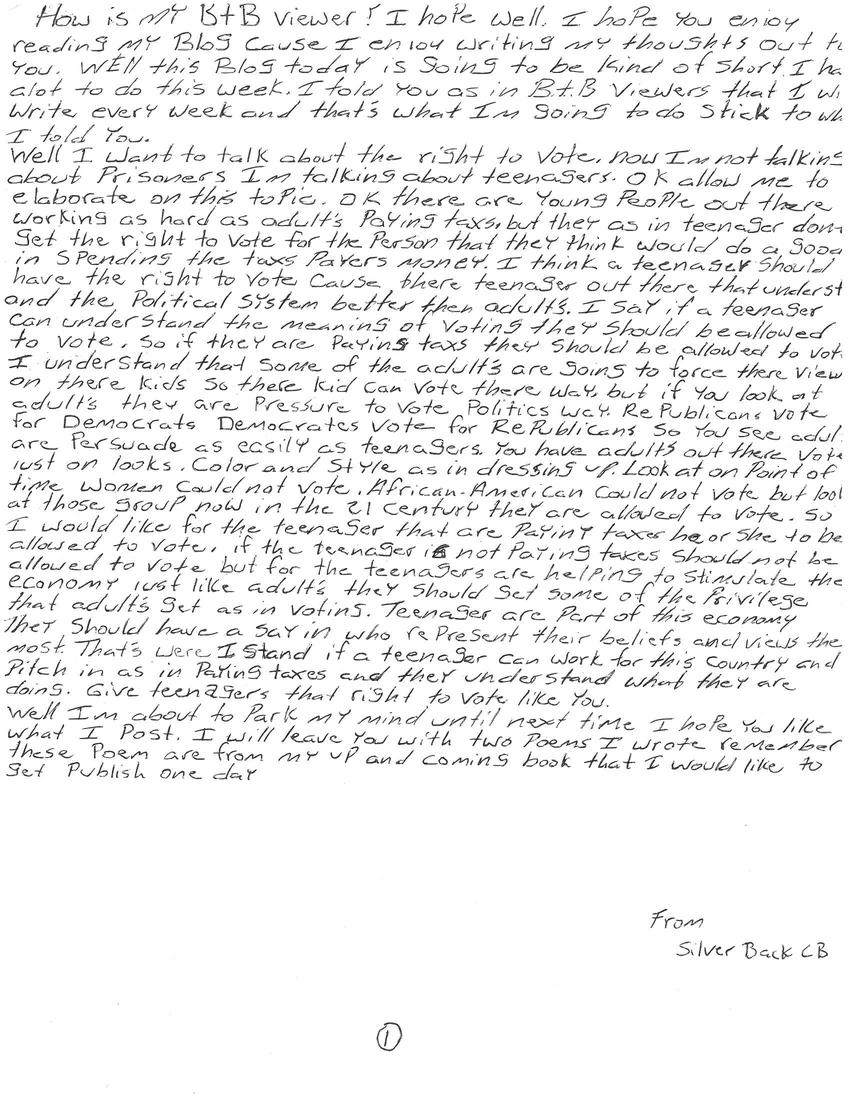 How is my B+B viewer? I hope well. I hope you enjoy reading my blog because I enjoy writing my thoughts out to you. Well this blog today is going to be kind of short. I have a lot to do this week. I told you as in B+B viewers that I will write every week and that's what I'm going to do, stick to what I told you.
Well I want to write about the right to vote. Now I'm not talking about prisoners I'm talking about teenagers. Ok allow me to elaborate on this topic. Ok there are young people out there working as hard as adults paying taxes, but they as teenagers don't get the right to vote for the person that they think would do a good in spending the tax payers money. I think a teenager should have the right to vote cause there're teenagers out there that understand the political system better than adults. I say if a teenager can understand the meaning of voting they should be allowed to vote. So if they are paying taxes they should be allowed to vote. I understand that some of the adults are going to force their view on their kids so their kids can vote their way, but if you look at adults they are pressure to vote politics way. Republicans vote for democrats, democrats vote for republicans, so you see adults are persuade as easely as teenagers. You have adults out there just vote on looks. Color and style as in dressing up. Look at on point of time women could not vote. African-American coult not vote, but look at those groups now in the 21 century they are allowed to vote. So I would like for the teenager that are paying taxes he or she to be allowed to vote, if the teenager is not paying taxes should not be allowed to vote but for the teenagers are helping to stimulate the economy just like adults they should get some of the privilege that adults get as in voting. Teenagers are part of this economy, they should have a say in who represent their believes and views the most. That's were I stand if a teenager can work for this country and pitch in as in paying taxes and they understand what they are doing. Give teenagers that right to vote like you.
Well I'm about to park my mind until next time I hope you like what I post. I will leave you with two poems I wrote. Remember these poems are from my up and coming book that I would like to get publish one day.

From
Silver Back LB