Stupid is as Stupid Does 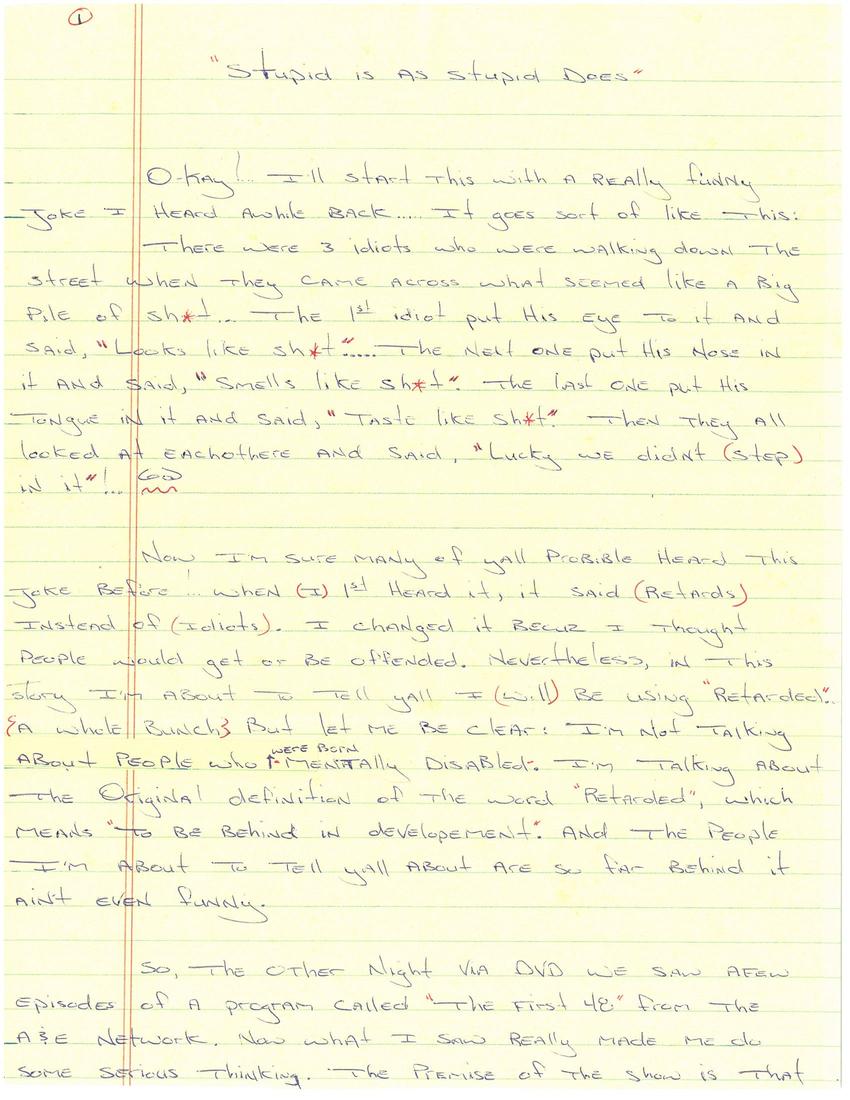 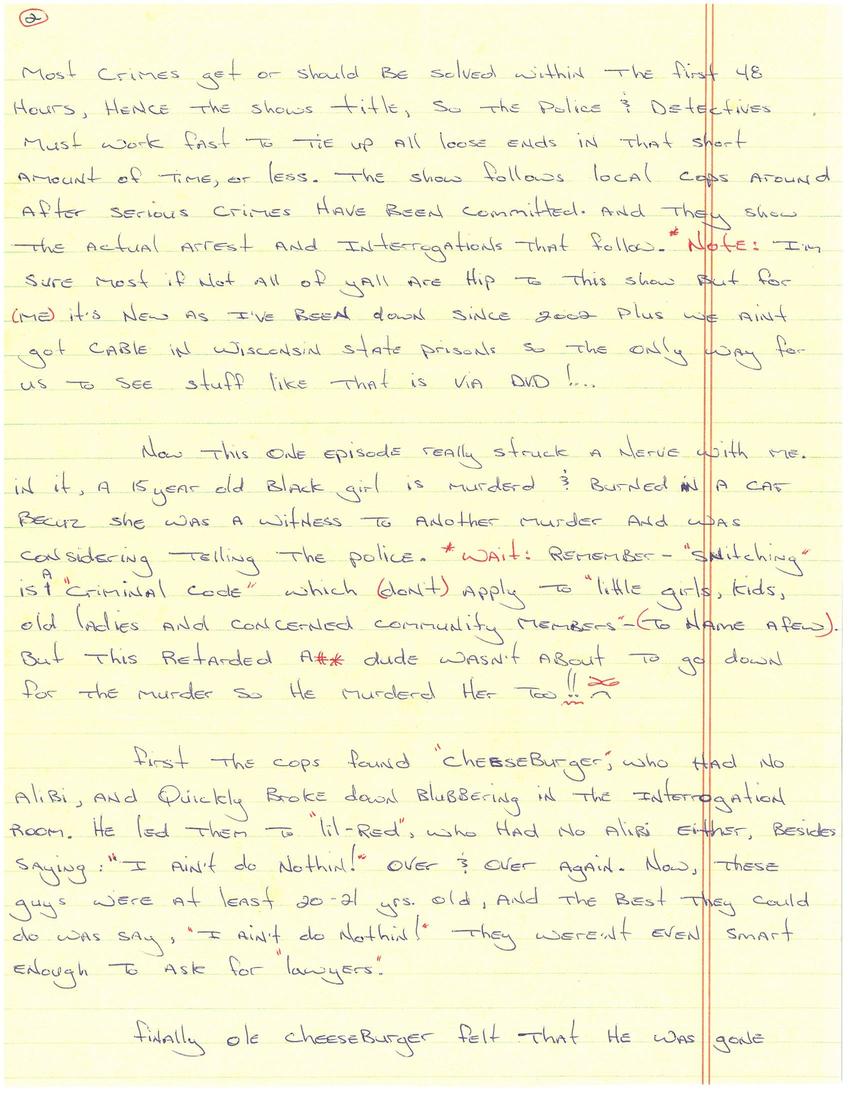 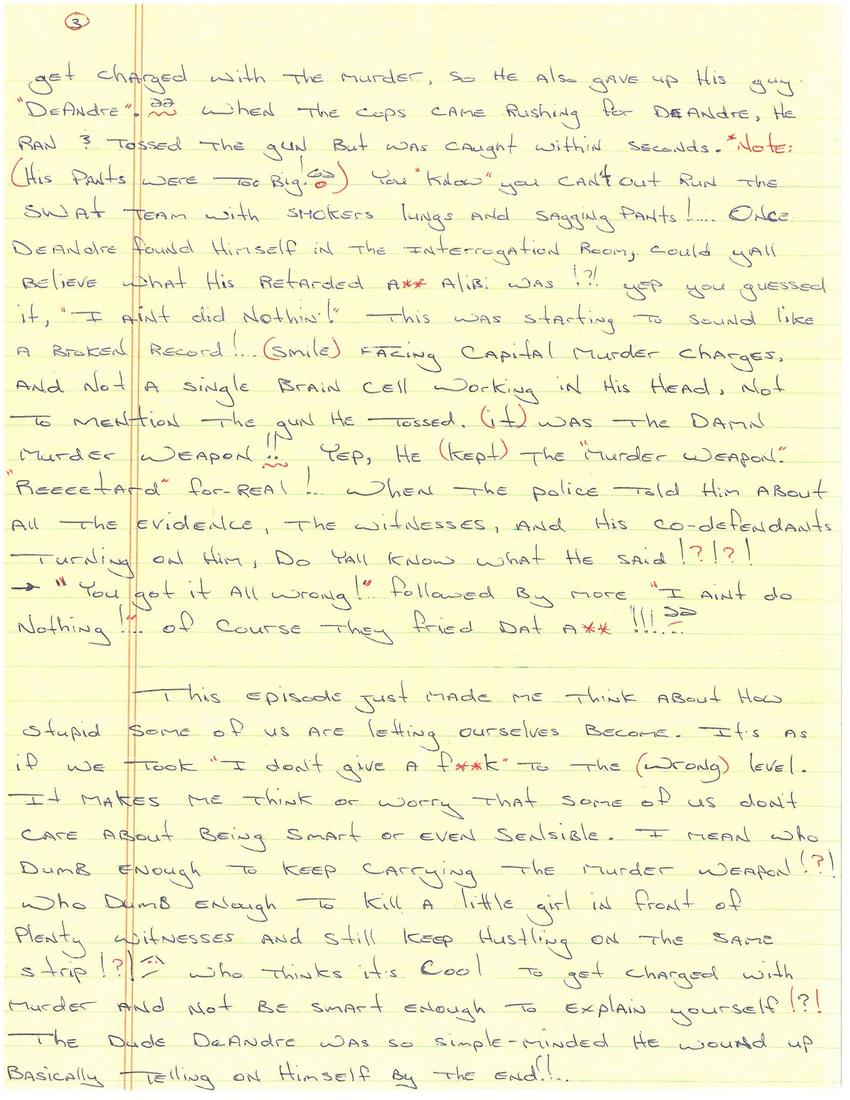 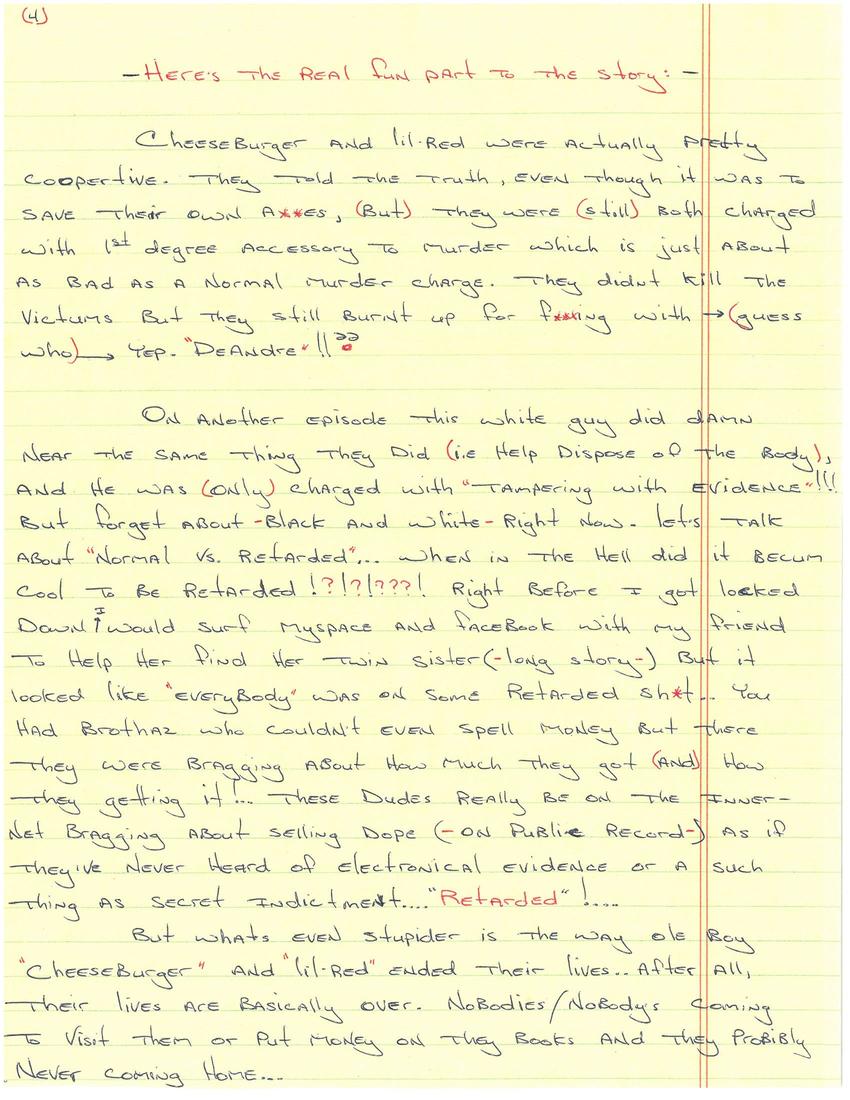 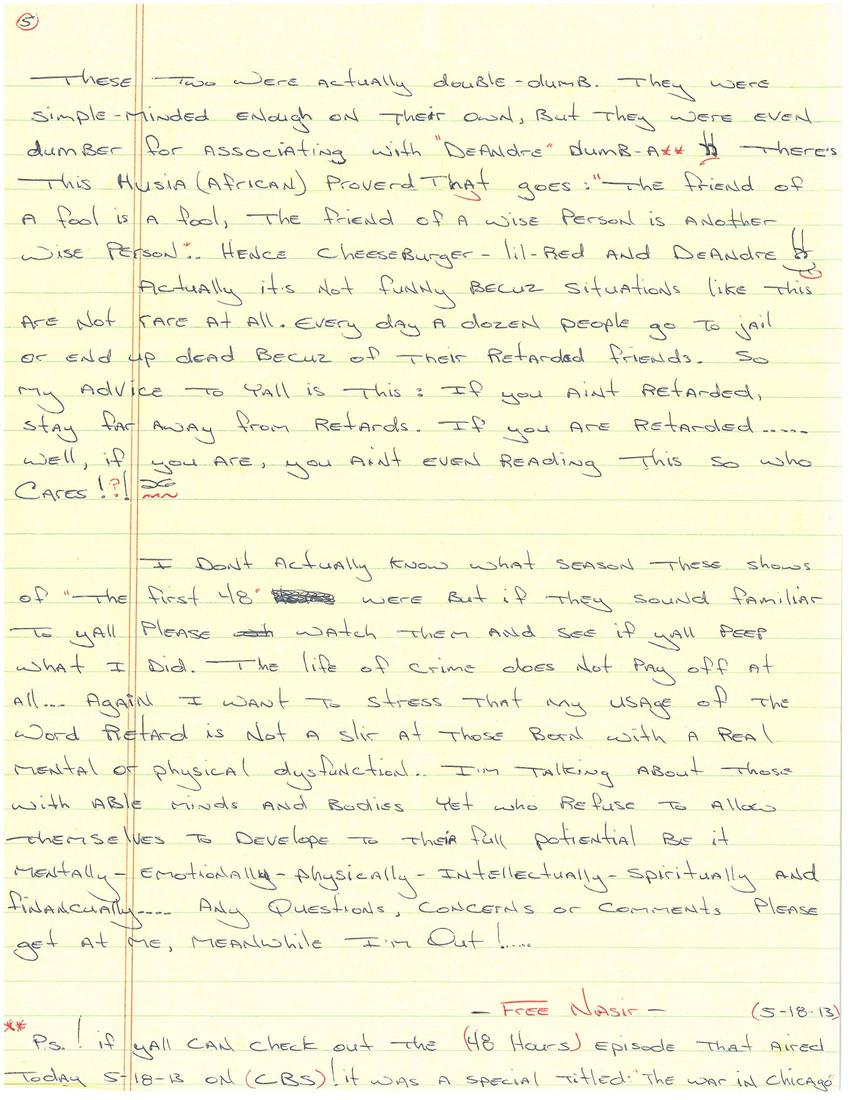 "Stupid is as Stupid Does"

O-kay!... I'll start this with a really funny joke I heard awhile back... It goes sort of like this:

Now, I'm sure many of y'all probably heard this joke before... when (I) 1st heard it, it said (retards) instead of (idiots). I changed it becuz I thought people would get or be offended. Nevertheless, in this story I'm about to tell y'all I (will) be using "retarded" [a whole bunch] but let me be clear: I'm not talking about people who were born mentally disabled. I'm talking about the original definition of the word "retarded", which means "to be behind in development". And the people I'm about to tell y'all about are so far behind it ain't even funny.

So the other night via DVD we saw a few episodes of a program called "The First 48" from the A&E network. Now what I saw really made me do some serious thinking. The premise of the show is that most crimes get or should be solved within the first 48 hours, hence the show title, so the police & detectives must work fast to tie up all loose ends in that short amount of time, or less. The show follows local cops around after serious crimes have been committed. And they show the actual arrest and interrogations that follow. * Note: I'm sure most if not all of y'all are hip to this show but for (me) it's new as I've been down since 2002 plus we ain't got cable in Wisconsin state prisons so the only way for us to see stuff like that is via DVD!...

Now this one episode really struck a nerve with me. In it, a 15 year old Black girl is murdered & burned in a car becuz she was a witness to another murder and was considering telling the police. *Wait: Remember - "snitching" is a "criminal code" which (don't) apply to "little girls, kids, old ladies and concerned community members" - (to name a few). But this retarded a** dude wasn't about to go down for the murder so he murdered her too!! :(

First the cops found "Cheeseburger", who had no alibi, and quickly broke down blubbering in the interrogation room. He led them to "Lil-Red", who had no alibi either, besides saying: "I ain't do nothin'!" over & over again. Now, these guys were at least 20-21 yrs old, and the best they could do was say, "I ain't do nothin'!" They weren't even smart enough to ask for "lawyers".

Finally ole Cheeseburger felt that he was gone get charged with the murder, so he also gave up his guy "DeAndre". 8{ When the cops came rushing for DeAndre, he ran & tossed the gun but was caught within seconds. *Note: (His pants were too big! :0 ) You "know" you can't out run the SWAT team with smoker's lungs and sagging pants!... Once DeAndre found himself in the interrogation room, could y'all believe what his retarded a** alibi was!?! Yep, you guessed it, "I ain't did nothin'!" This was starting to sound like a broken record!... (smile) Facing capital murder charges, and not a single brain cell working in his head, not to mention the gun he tossed. (It) was the damn murder weapon!! Yep, he (kept) the "murder weapon". "Reeeetard" for real!... When the police told him about all the evidence, the witnesses, and his co-defendants turning on him, do y'all know what he said!?!?! -> "You got it all wrong!" followed by more "I ain't do nothing!"... Of course they fried dat a**!! :/

This episode just made me think about how stupid some of us are letting ourselves become. It's as if we took "I don't give a f**k" to the (wrong) level. It makes me think or worry that some of us don't care about being smart or even sensible. I mean who dumb enough to keep carrying the murder weapon!?! Who dumb enough to kill a little girl in front of plenty witnesses and still keep hustling on the same strip!?! :/ Who thinks it's cool to get charged with murder and not be smart enough to explain yourself!?! The dude DeAndre was so simple-minded he wound up basically telling on himself by the end!!...

Cheeseburger and Lil-Red were actually pretty cooperative. They told the truth, even though it was to save their own a**es, (but) they were (still) both charged with 1st degree accessory to murder which is just about as bad as a normal murder charge. They didn't kill the victims but they still burnt up for f***ing with -> (guess who) -> yep. "DeAndre"!! :0

On another episode this white guy did damn near the same thing they did (i.e. help dispose of the body), and he was (only) charged with "tampering with evidence"!!! But forget about - black and white - right now. Let's talk about "normal vs. retarded"... When in the hell did it becum cool to be retarded!?!?!???! Right before I got locked down I would surf MySpace and Facebook with my friend to help her find her twin sister (-long story-) but it looked like "everybody" was on some retarded sh*t. You had brothaz who couldn't even spell money but there they were bragging about how much they got (and) how they getting it!... These dudes really be on the internet bragging about selling dope (-on public record-) as if they've never heard of electronical evidence or a such thing as secret indictment... "retarded"!...

But what's even stupider is the way ole boy "Cheeseburger" and "Lil-Red" ended their lives... After all, their lives are basically over. Nobodies/Nobody's coming to visit them or put money on they books and they probably never coming home...

These two were actually double-dumb. They were simple-minded enough on their own, but they were even dumber for associating with "DeAndre" dumb-a** :( There's this Husia (African) proverb that goes: "The friend of a fool is a fool, the friend of a wise person is another wise person". Hence Cheeseburger, Lil-Red and DeAndre. :P

Actually it's not funny becuz situations like this are not rare at all. Every day a dozen people go to jail or end up dead becuz of their retarded friends. So my advice to y'all is this: if you ain't retarded, stay far away from retards. If you are retarded... well, if you are, you ain't even reading this so who cares!?! :{

I don't actually know what season these shows of "The First 48" were but if they sound familiar to y'all please watch them and see if y'all peep what I did. The life of crime does not pay off at all... Again I want to stress that my usage of the word retard is not a slur at those born with a real mental or physical dysfunction. I'm talking about those with able minds and bodies yet who refuse to allow themselves to develop to their full potential, be it mentally - emotionally - physically - intellectually - spiritually and financially... Any questions, concerns or comments please get at me, meanwhile I'm out!...