Nasir Teaches the "Young Thugs" How to Deal with (Women)!!! 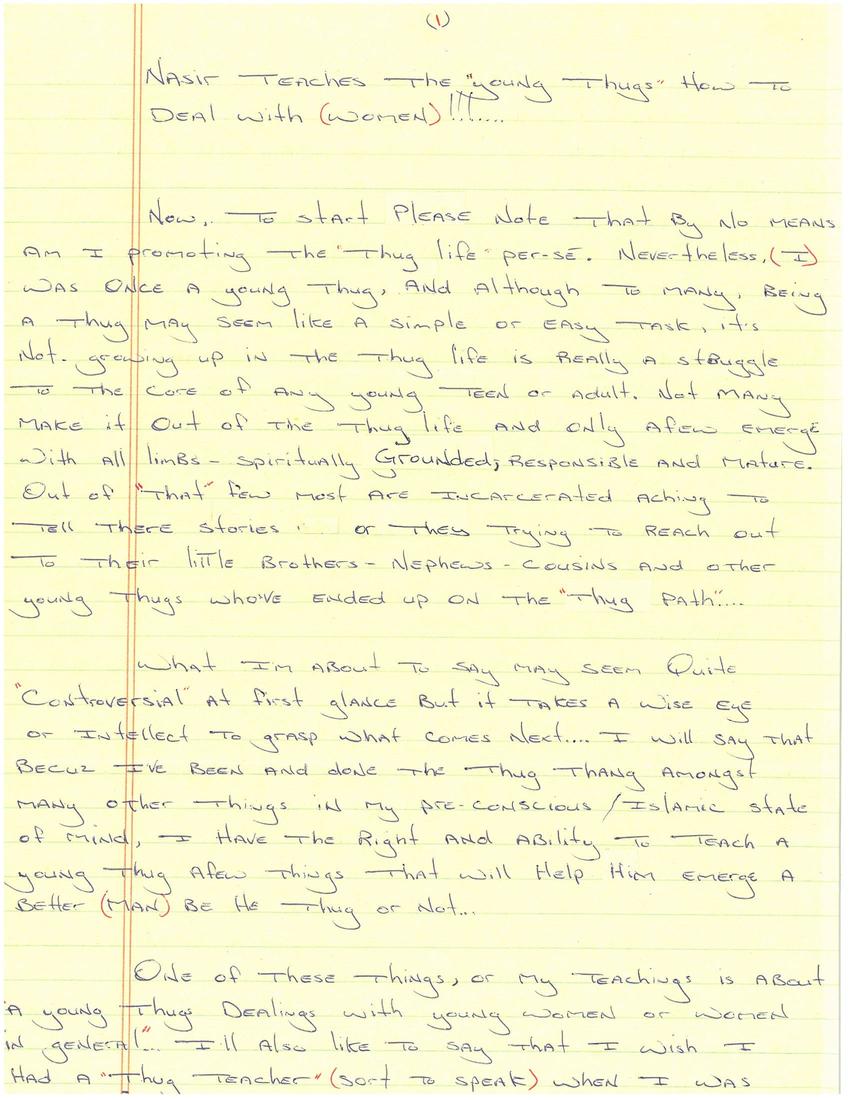 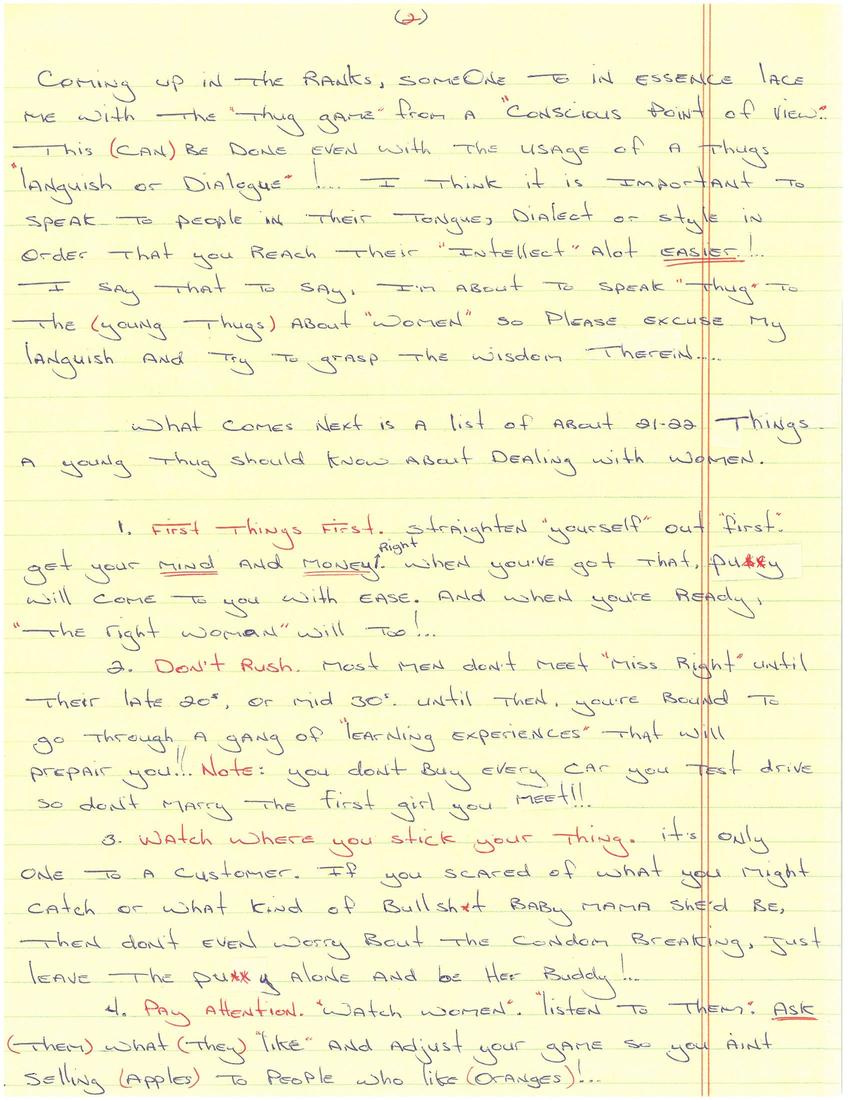 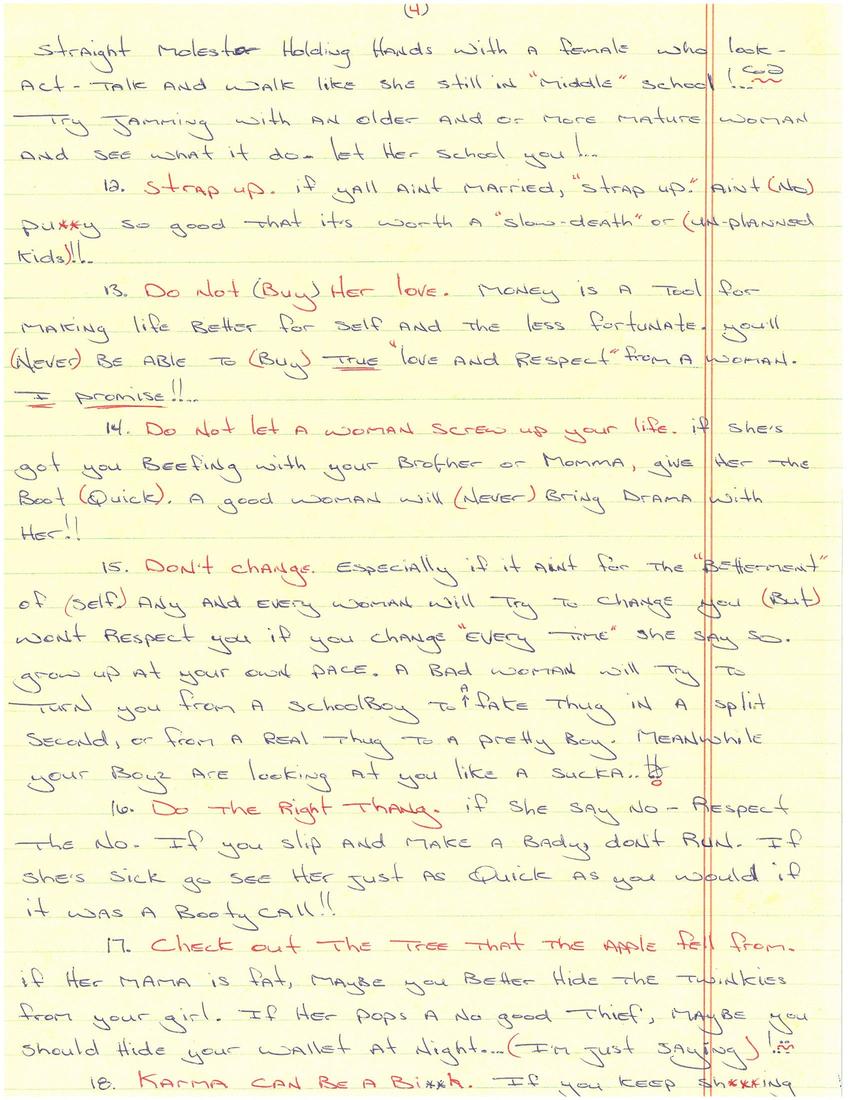 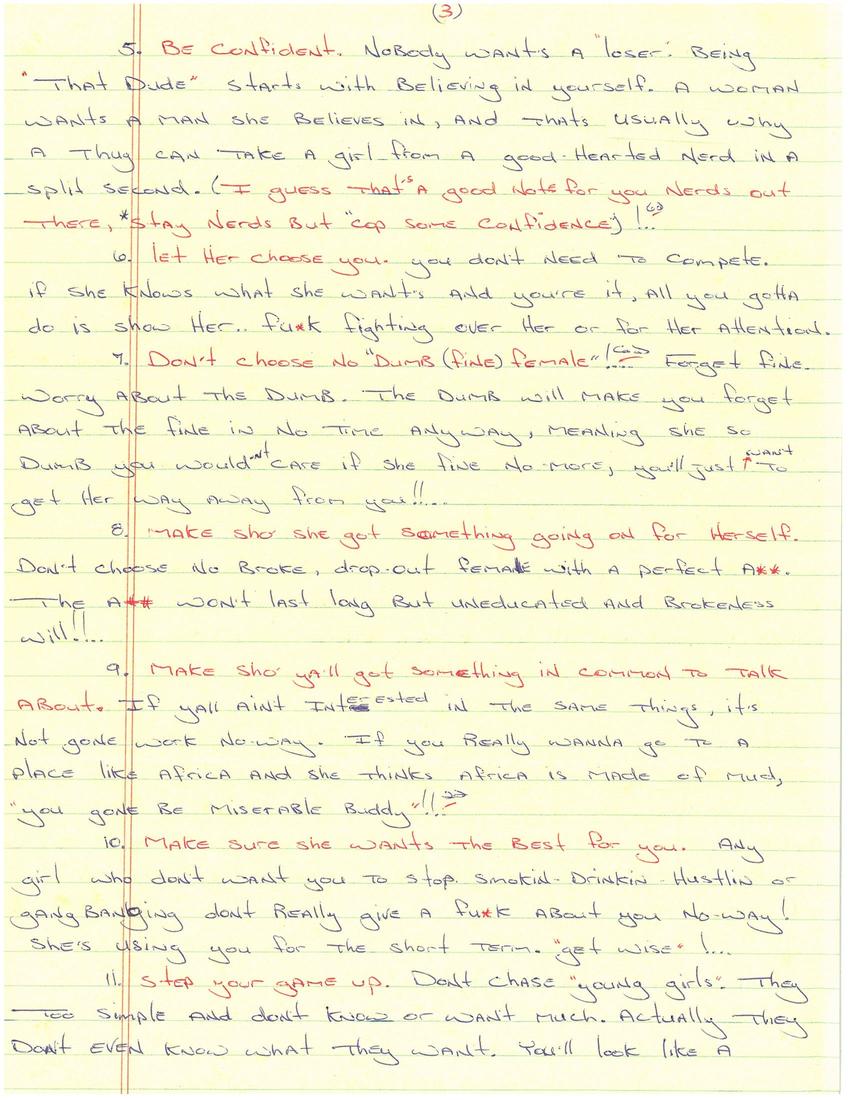 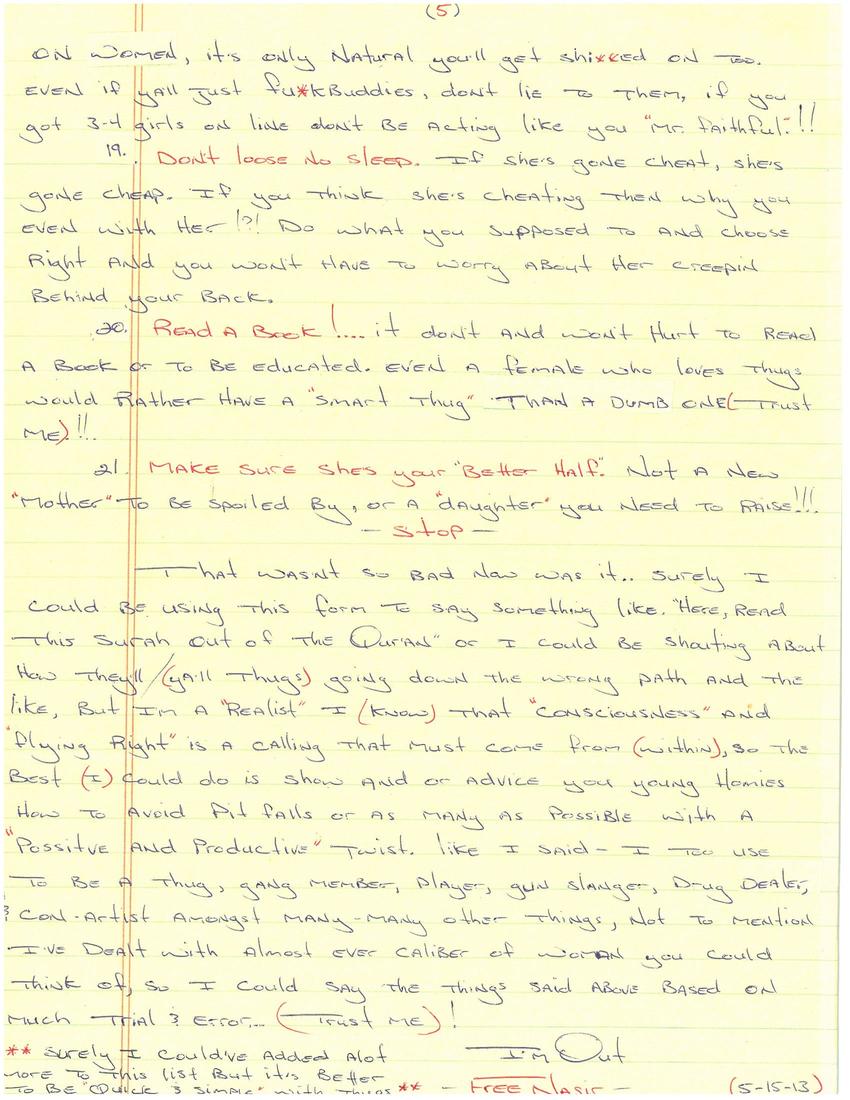 Now, to start please note that by no means
am I promoting the thug life per-se. Nevertheless. (I)
was once a young thug, and although to many, being
a thug may seem like a simple or easy task, it's
not. Growing up in the thug life is really a struggle
to the core of any young teen or adult. Not many
make it out of the thug life and only a few emerge
with all limbs - spiritually grounded, responsible and mature.
Out of "that" few most are incarcerated aching to
tell there stories. or they trying to reach out
to their little brothers-nephews-cousins and other
young thugs who've ended up on the "thug path"...

What I'm about to say may seem quite
"controversial" at first glance but it takes a wise eye
or intellect to grasp what comes next...I will say that
becuz I've been and done the thug thang amongst
many other things in my pre-conscious/islamic state
of mind, I have the right and ability to teach a
young thug a few things that will help him emerge a
better (man) be he thug or not...

One of these things, or my teachings is about
a young thugs dealing with young women or women
in general. I'll also like to say that I wish I
had a "thug teacher" (sort to speak) when I was
coming up in the ranks, someone to in essence lace
me with the "thug game" from a "conscious point of view"
This (can) be done even with the usage of a thugs
"languish or dialogue"!... I think it is important to
speak to people in their tongue, dialect or style in
order that you reach their "intellect" alot easier!...
I say that to say I'm about to speak "thug" to
the (young thugs) about "women" so please excuse my
languish and try to grasp the wisdom therein...

What comes next is a list of about 21-22 things
a young thug should know dealing with women.

1. First things first. straighten "yourself" out "first"
get your mind and money (right). When you've got that, pu**y
will come to you with ease. And when you're ready,
"the right woman" will too!...
1. Don't rush. Most men don't meet "miss right" until
their late 20's or mid 30's. until then, you're bound to
go through a gang of "learning experiences" that will
prepair you!!. Note: you don't buy every car you test drive
so don't marry the first girl you meet!!!
3. Watch where you stick your thing. it's only
one to a customer. If you scared of what you might
catch or what kind of bullsh*t baby mam she'd be,
than don't even worry bout the condom breaking, just
leave the pu**y alone and be her buddy!
4. Pay attention. "watch women" "listen to them" ask
(them) what (they) "like" and adjust your game so you aint
selling (apples) to people who like (oranges)!...

[PAGES OUT OF ORDER]

5. Be confident. Nobody wants a loser. Being
"that dude" starts with believing in yourself. A woman
wants a man she believes in, and thats usually why
a thug can take a girl from a good-hearted nerd in a
split second. (I guess that's a good note for you nerds out
there, *stay nerds but "cop some confidence)!.."
6. Let her choose you. You don't need to compete.
If she knows what she wants and you're it, all you gotta
do is show her..fu*k fighting over her or for her attention.
7. Don't choose no "dumb (fine) female!" Forget fine.
Worry about the dumb. The dumb will make you forget
about the fine in no time anyway, meaning she so
dumb you wouldn't care if she fine no more, you'll just want to
get her way away from you!!...
8. Make sho she got something going on for herself.
Don't choose no broke, drop-out female with a perfect a**.
The a** won't last long but uneducated and brokeness
will!!...
9. Make sho ya'll got something in common to talk
about. If yall aint interested in the same things, it's
not gone work no way. If you really wanna go to a
place like Africa and she thinks Africa is made of mud,
"you gone be miserable buddy!!"...
10. Make sure she wants the best for you. Any
girl who don't want you to stop smokin-drinkin-hustlin or
gang banging don't really give a fu*k about you. No way!
She's using you for the short term. "get wise!"...
11. Step your game up. Don't chase "young girls." They
too simple and don't know or want much. Actually they
don't even know what they want. You'll look like a
straight molester holding hands with a female who look-
act-talk and walk like she still in "middle" school!
Try jamming with an older and or more mature woman
and see what it do. Let her school you!
12. Strap up. if yall aint married, "strap up" aint (No)
pu**y so good that it's worth a "slow-death" or (un-planned
kids)!!
13. Do not (buy) her love. Money is a tool for
making life better for self and the less fortunate. You'll
(Never) be able to (buy) true "love and respect" from a women.
I promise!!.
14. Do not let a woman screw up your life. if she's
got you beefing with your brother or momma, give her the
boot (quick). A good woman will (never) bring drama with
her!!
15. Don't change. Especially if it aint for the "betterment"
of (self) Any and every woman will try to change you (but)
wont respect you if you change "every time" she say so.
grow up at your own pace. A bad woman will try to
turn you from a schoolboy to a fake thug in a split
second, or from a real thug to a pretty boy. Meanwhile
your boyz are looking at you like a sucka..
16. Do the right thang. if she say no- respect
the no. If you slip and make a baby, don't run. If
she's sick go see her just as quick as you would if
it was a booty call!!
17. Check out the tree that the apple fell from.
if her mama is fat, maybe you better hide the twinkies
from your girl. If her pops a no good thief, maybe you
shoud hide your wallet at night...(I'm just saying)!
18. Karma can be a bi**h. If you keep sh***ing
on women, its only natural you'll get shi**ed on too.
Even if ya'll just fu*k buddies, don't lie to them, if you
got 3-4 girls on line don't be acting like you "mr. faithful.!!"
19. Don't loose no sleep. If she's gone cheat, she's
gone cheap. If you think she's cheating then why you
even with her!?! Do what you supposed to and choose
right and you won't have to worry about her creepin
behind your back.
20. Read a book!...it don't and won't hurt to read
a book or to be educated. Even a female who loves thugs
would rather have a "smart thug" than a dumb one (trust
me!!)...
21. Make sure she's your "better half." Not a new
"mother" to be spoiled by, or a "daughter" you need to raise!!!

That wasn't so bad now was it..surely I
could be using this form to say something like "here, read
this surah out of the Quran or I could be shouting about
how they'll/(ya'll thugs) going down the wrong path and the
like, but I'm a "realist" I (know) that "consciousness" and
"flying right" is a calling that must come from (within), so the
best (I) could do is show and or advise you young homies
how to avoid pit falls or as many as possible with a
"Positive and Productive" twist. Like I said - I too use
to be a thug, gang member, player, gun slanger, drug dealer,
& con-artist amongst many many other things, not to mention
I've dealt with almost every caliber of woman you could
think of, so I could say the things said above based on
much trial & error...(Trust me)!