Where is the Benefit in Being a Vice Lord?

filed under: photos
Reply ✍ Transcribed
From Reform with Palms Up by Michael Johnson
Share this:
uploaded Nov. 6, 2010.  Original (PDF) 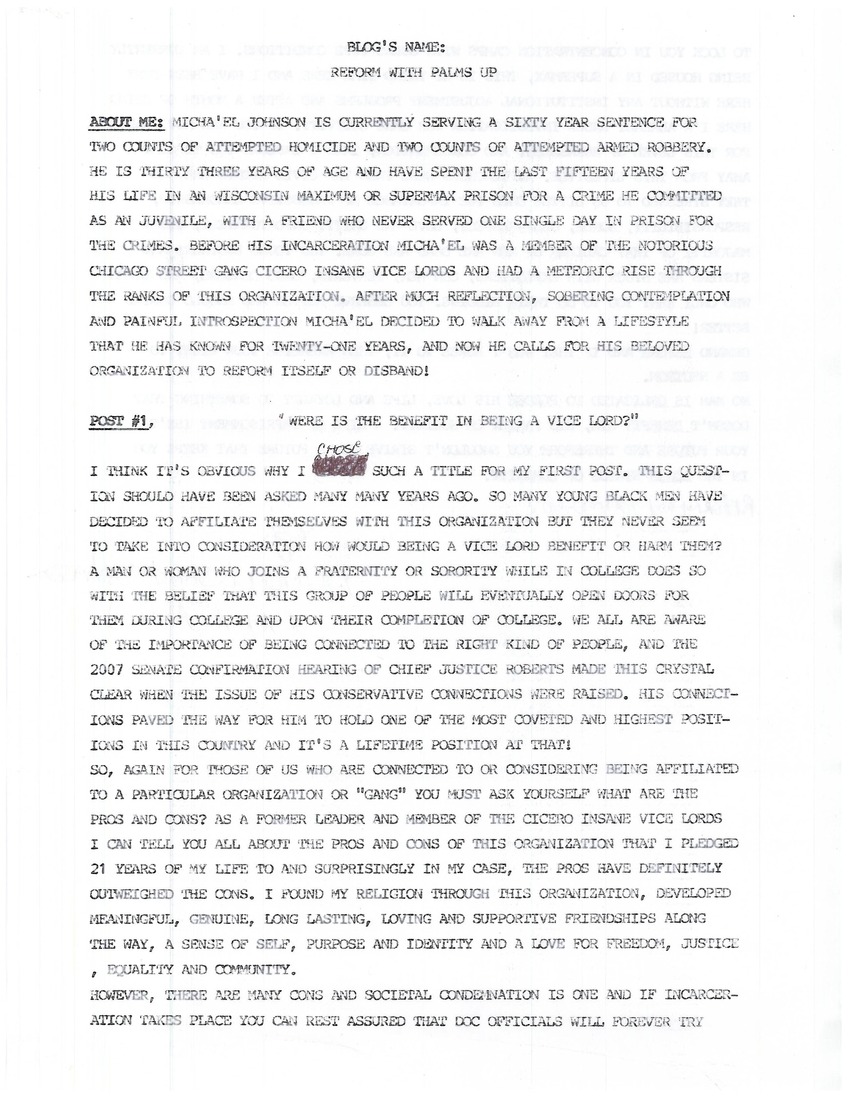 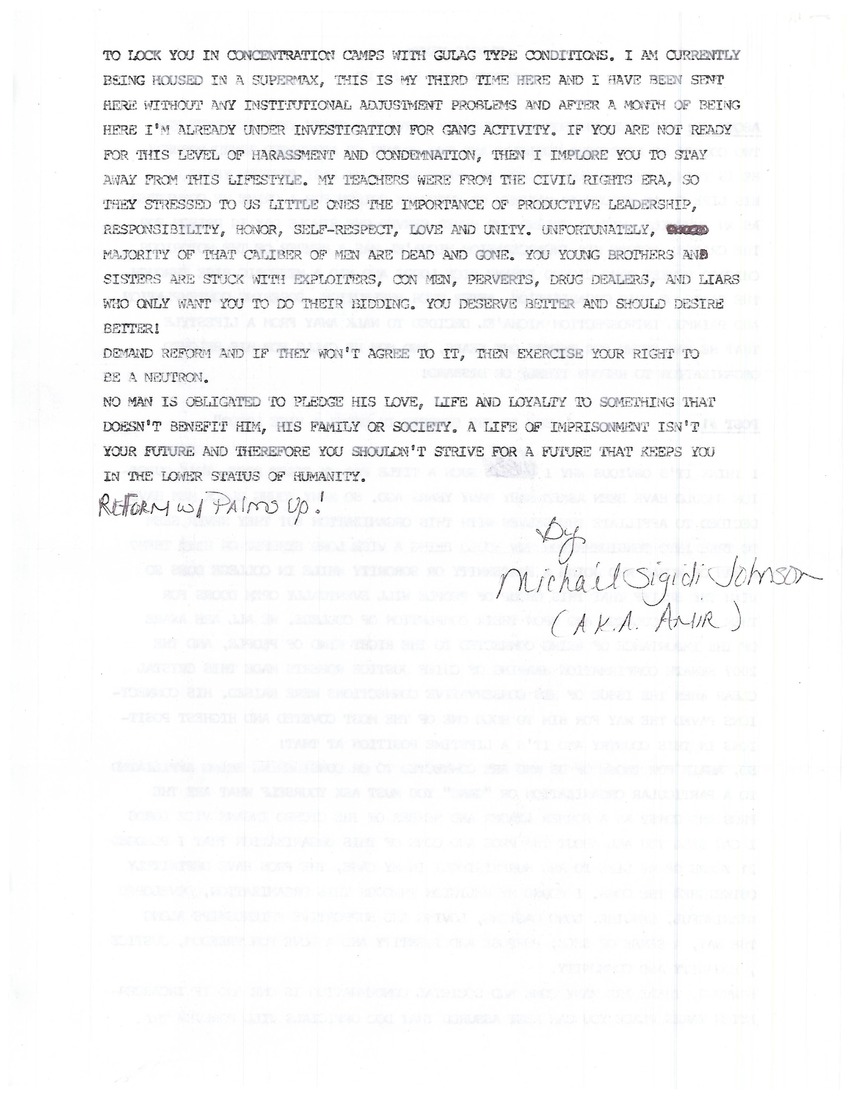 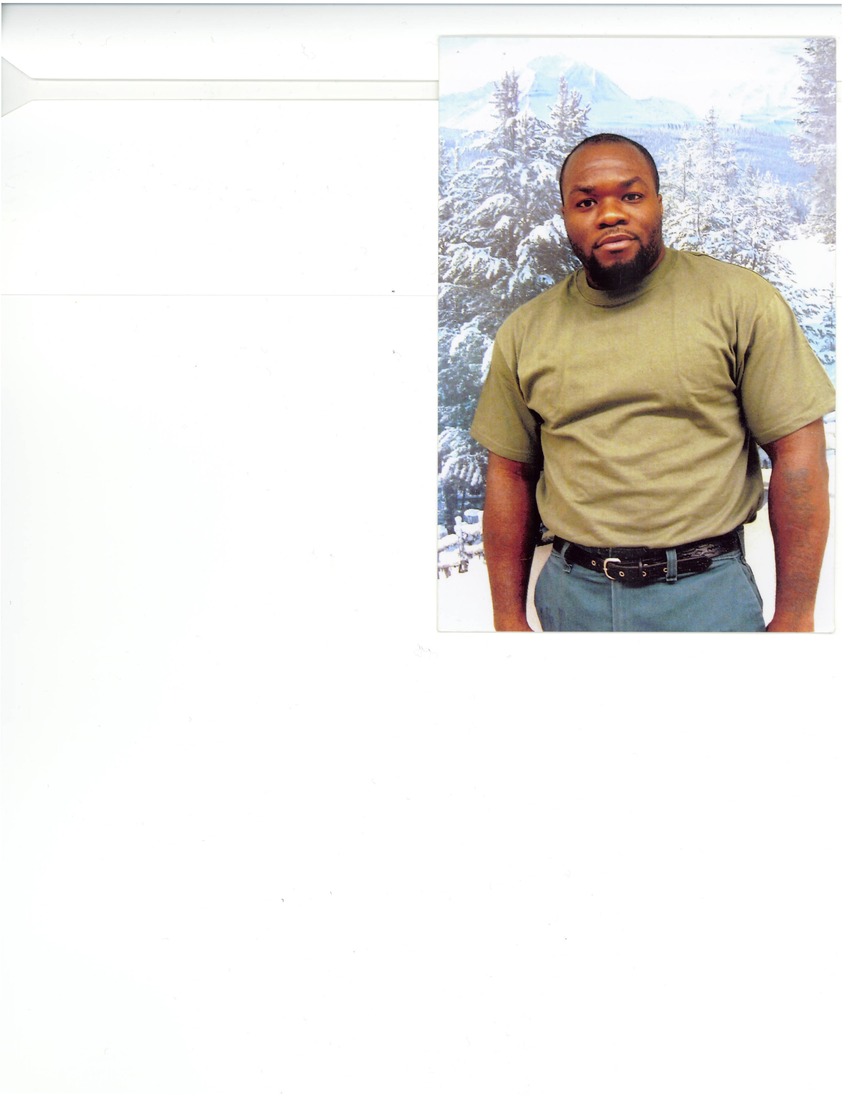 REFORM WITH PALMS UP

ABOUT ME: Micha'el Johnson is currently serving a sixty year sentence for two counts of attempted homicide and two counts of attempted armed robbery. He is thirty three years of age and have spent the last fifteen years of his life in a Wisconsin maximum or supermax prison for a crime he committed as a juvenile, with a friend who never served one single day in prison for the crimes. Before his incarceration Micha'el was a member of the notorious Chicago street gang Cicero Insane Vice Lords and had a meteoric rise through the ranks of this organization. After much reflection, sobering contemplation and painful introspection Micha'el decided to walk away from a lifestyle that he has known for twenty-one years, and now he calls for his beloved organization to reform itself or disband!

Post#1, "Where is the benefit in being a Vice Lord?"

I think it's obvious why I chose such a title for my first post. This question should have been asked many many years ago. So many young black men have decided to affiliate themselves with this organization but they never seem to take into consideration how would being a vice lord benefit or harm them? A man or woman who joins a fraternity or sorority while in college does so with the belief that this group of people will eventually open doors for them during college and upon their completion of college. We are all aware of the importance of being connected to the right kind of people, and the 2007 senate confirmation hearing of Chief Justice Roberts made this crystal clear when the issue of his conservative connections were raised. His connections paved the way for him to hold one of the most coveted and highest positions in this country and it's a lifetime position at that!

So, again for those of us who are connected to or considering being affiliated to a particular organization or "gang" you must ask yourself what are the pros and cons? As a former leader and member of the Cicero Insane Vice Lords I can tell you all about the pros and cons of this organization that I pledge 21 years of my life to and surprisingly in my case, the pros have definitely outweighed the cons. I found my religion through this organization, developed meaningful, genuine, long lasting, loving and supportive friends along the way, a sense of self, purpose and identity and love for freedom, justice, equality and community.

However, there are many cons and societal condemnation is one and if incarceration takes place you can rest assured that DOC officials will forever try to lock you in concentration camps with gulag type conditions. I am currently being housed in a supermax, this is my third time here and I have been sent here without any institutional adjustment problems and after a month of being here I'm already under investigation for gang activity. If you are not ready for this level of harassment and condemnation, then I implore you to stay away from this lifestyle. My teachers were from the civil rights era, so they stressed to us little ones the importance of productive leadership, responsibility, honor, self-respect, love and unity. Unfortunately, majority of that caliber of men are dead and gone. You young brothers and sisters are stuck with exploiters, con men, perverts, drug dealers, and liars who only want you to do their bidding. You deserve better and should desire better!

Demand reform and if they won't agree to it, then exercise your right to be a neutron.

No man is obligated to pledge his love, life and loyalty to something that doesn't benefit him, his family or society. A life of imprisonment isn't your future and therefore you shouldn't strive for a future that keeps you in the lower status of humanity.

by
Micha'el Sigdi Johnson
(a.k.a. Amir)

Dear Michael,
Your Post #1 is fascinating! I look forward to reading more of your writing about the Pros and Cons of being connected to a Gang. I would love to know a bit more about what reforms you are saying young people should demand.