Consult With The Vanguards

Reply ✍ Transcribed
From Reform with Palms Up by Michael Johnson
Share this:
uploaded Nov. 18, 2012.  Original (PDF) 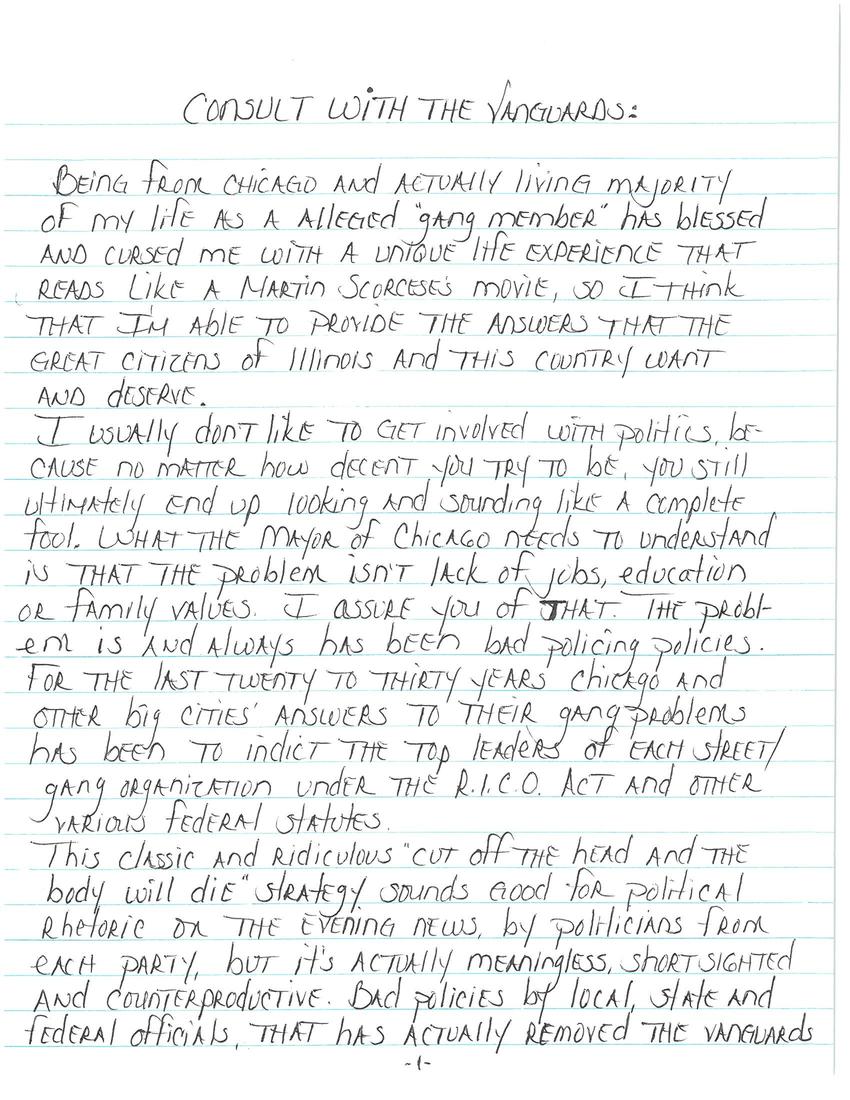 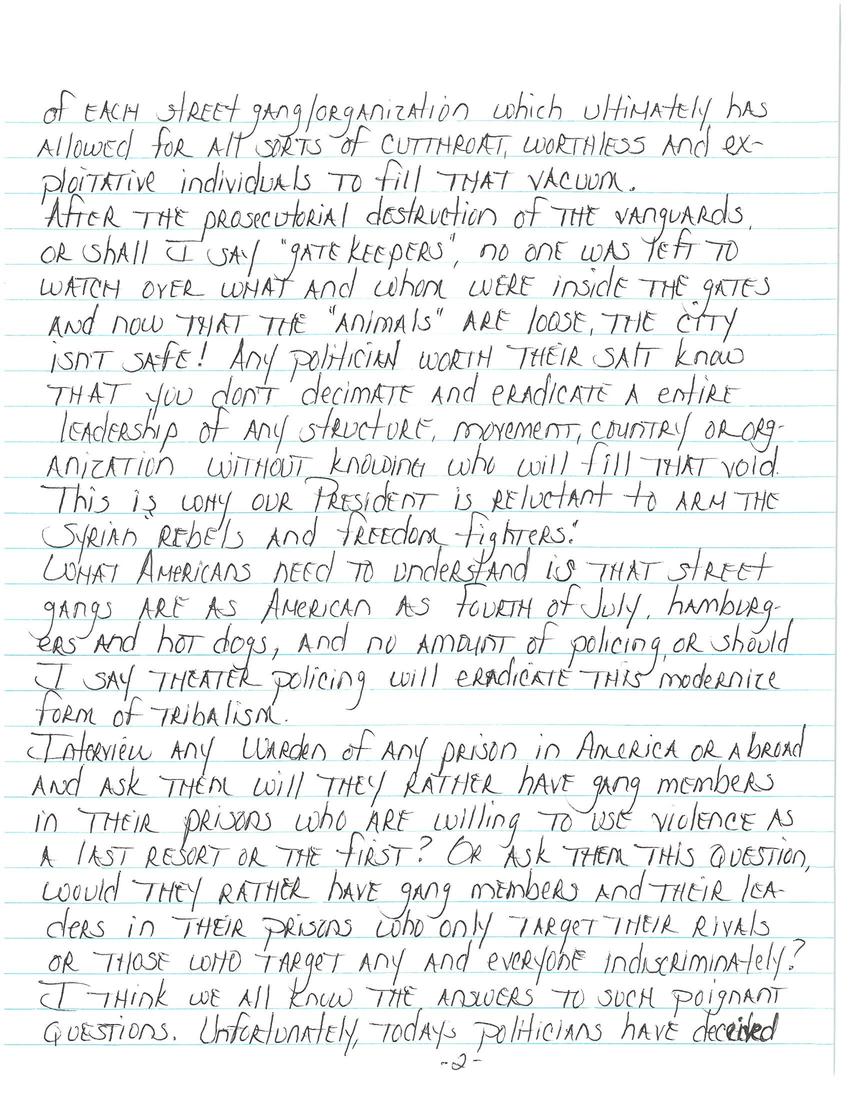 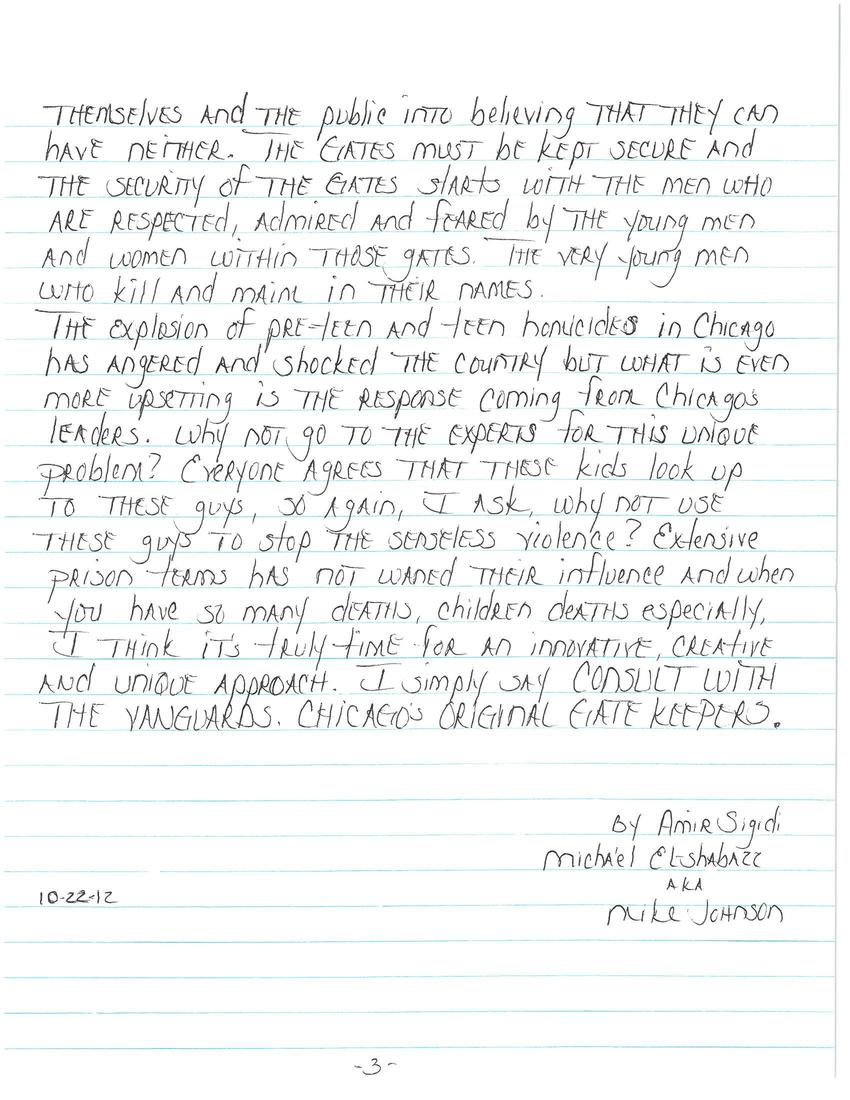 Consult with the Vanguards:

Being from Chicago and actually living majority of my life as an alleged "gang member" has blessed and cursed me with a unique life experience that reads like a Martin Scorsese movie, so I think that I'm able to provide the answers that the great citizens of Illinois and this country want and deserve.

I usually don't like to get involved with politics, because no matter how decent you try to be, you still ultimately end up looking and sounding like a complete fool. What the mayor of Chicago needs to understand is that the problem isn't lack of jobs, education or family values. I assure you of that. The problem is and always has been bad policing policies. For the last twenty to thirty years Chicago and other big cities' answers to their gang problems has been to indict the top leaders of each street/gang organization under the R.I.C.O. Act and other various federal statutes.

This classic and ridiculous "cut off the head and the body will die" strategy sounds good for political rhetoric or the evening news, by politicians from each party, but it's actually meaningless, short-sighted and counterproductive. Bad policies by local, state and federal officials, that has actually removed the vanguards of each street gang/organization, which ultimately has allowed for all sorts of cutthroat, worthless and exploitative individuals to fill that vacuum.

After the prosecutorial destruction of the vanguards, or shall I say "gatekeepers", no one was left to watch over what and whom were inside the gates and now that the "animals" are loose, the city isn't safe! Any politician worth their salt knows that you don't decimate and eradicate an entire leadership of any structure, movement, country or organization without knowing who will fill that void. This is why our President is reluctant to arm the Syrian rebels and freedom fighters.

What Americans need to understand is that street gangs are as American as Fourth of July, hamburgers and hot dogs. And no amount of policing or should I say THEATER policing will eradicate this modernized form of tribalism.

Interview any warden of any prison in America or abroad and ask them will they rather have gang members in their prisons who are willing to use violence as a last resort or the first? Or ask them this question, would they rather have gang members and their leaders in their prisons who only target their rivals or those who target any and everyone indiscriminately? I think we all know the answers to such poignant questions. Unfortunately, today's politicians have deceived themselves and the public into believing that they can have neither. The gates must be kept secure and the security of the gates starts with the men who are respected, admired and feared by the young men and women within those gates. The very young men who kill and maim in their names.

The explosion of pre-teen and teen homicides in Chicago has angered and shocked the country but what is even more upsetting is the response coming from Chicago's leaders. Why not go to the experts for this unique problem? Everyone agrees that these kids look up to these guys. So again I ask, why not use these guys to stop the senseless violence? Extensive prison terms has not waned their influence and when you have so many deaths, children deaths especially, I think it's truly time for an innovative, creative and unique approach. I simply say CONSULT WITH THE VANGUARDS, CHICAGO'S ORIGINAL GATEKEEPERS.