Why my divorce from my gang took so long.

Reply ✍ Transcribed
From Reform with Palms Up by Michael Johnson
Share this:
uploaded March 21, 2011.  Original (PDF) 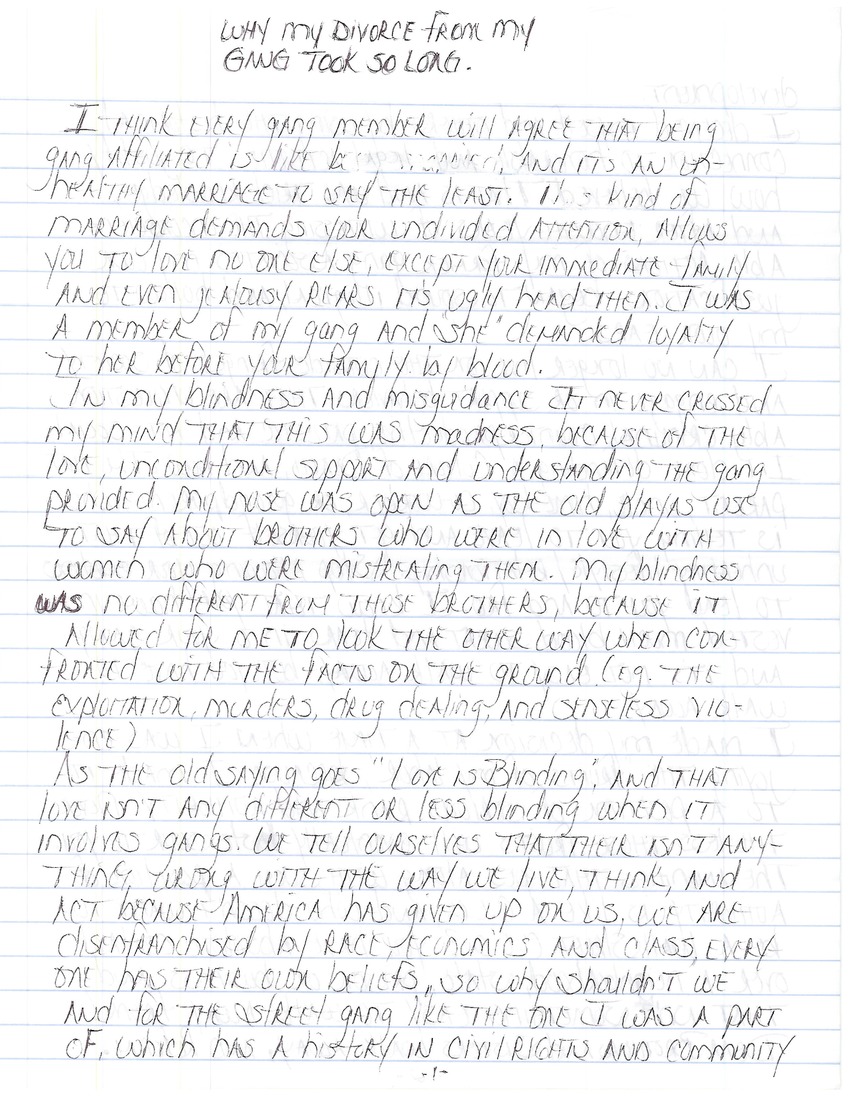 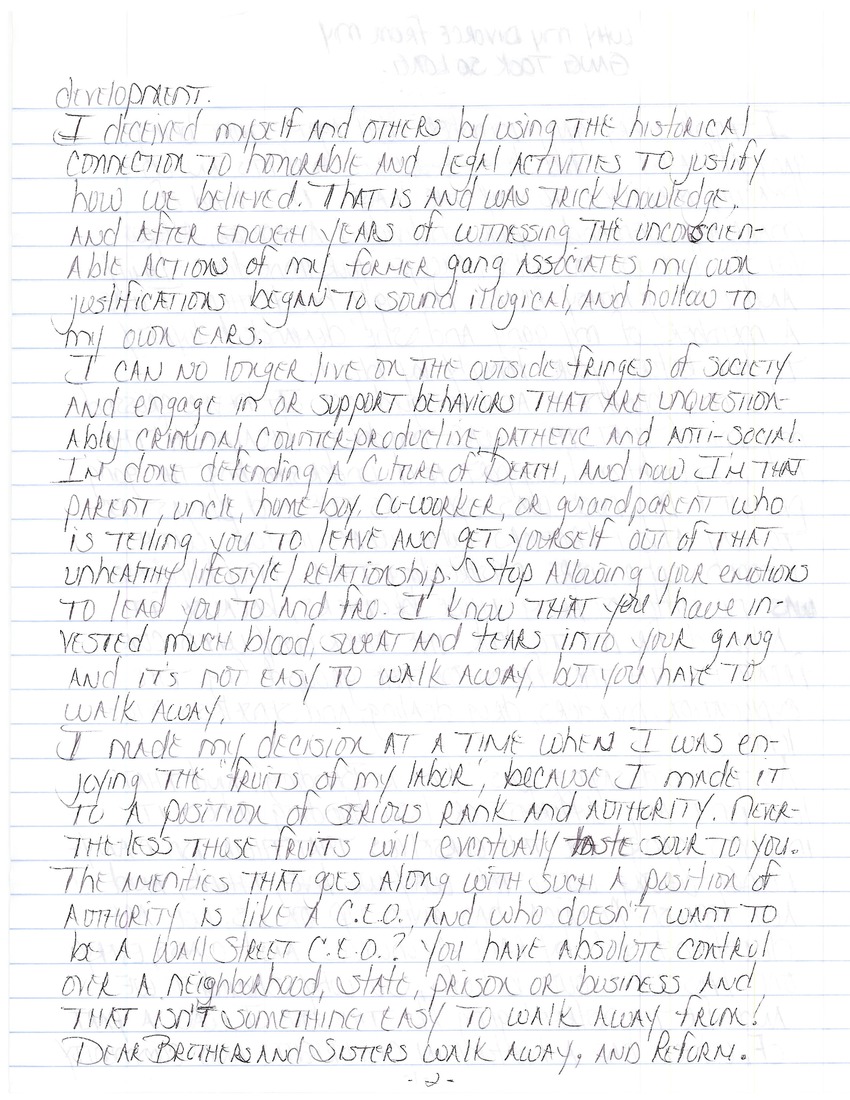 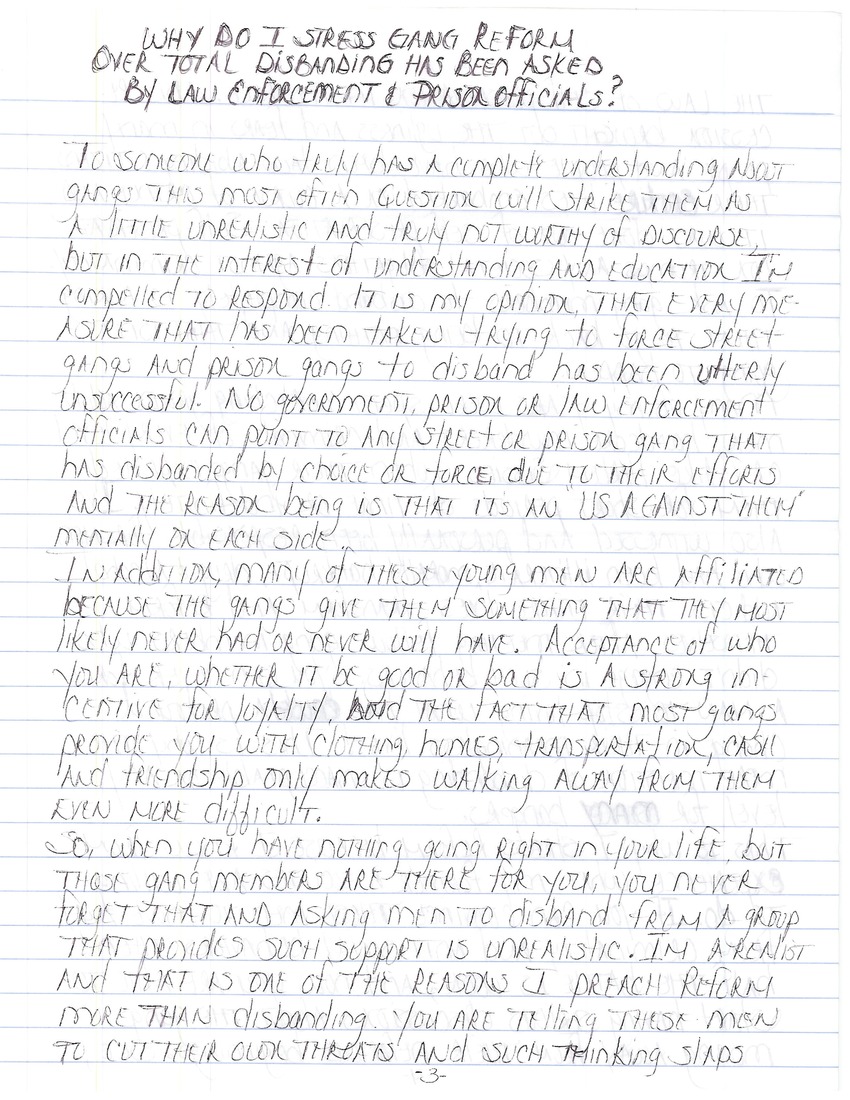 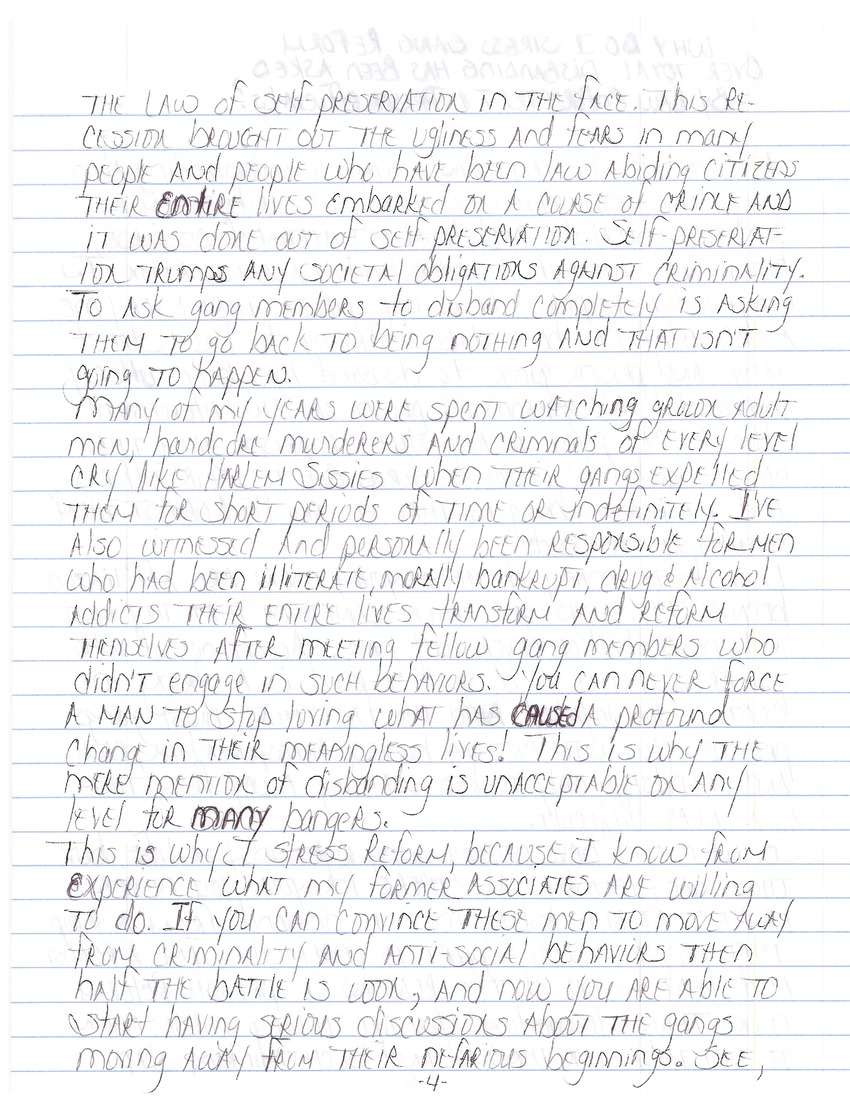 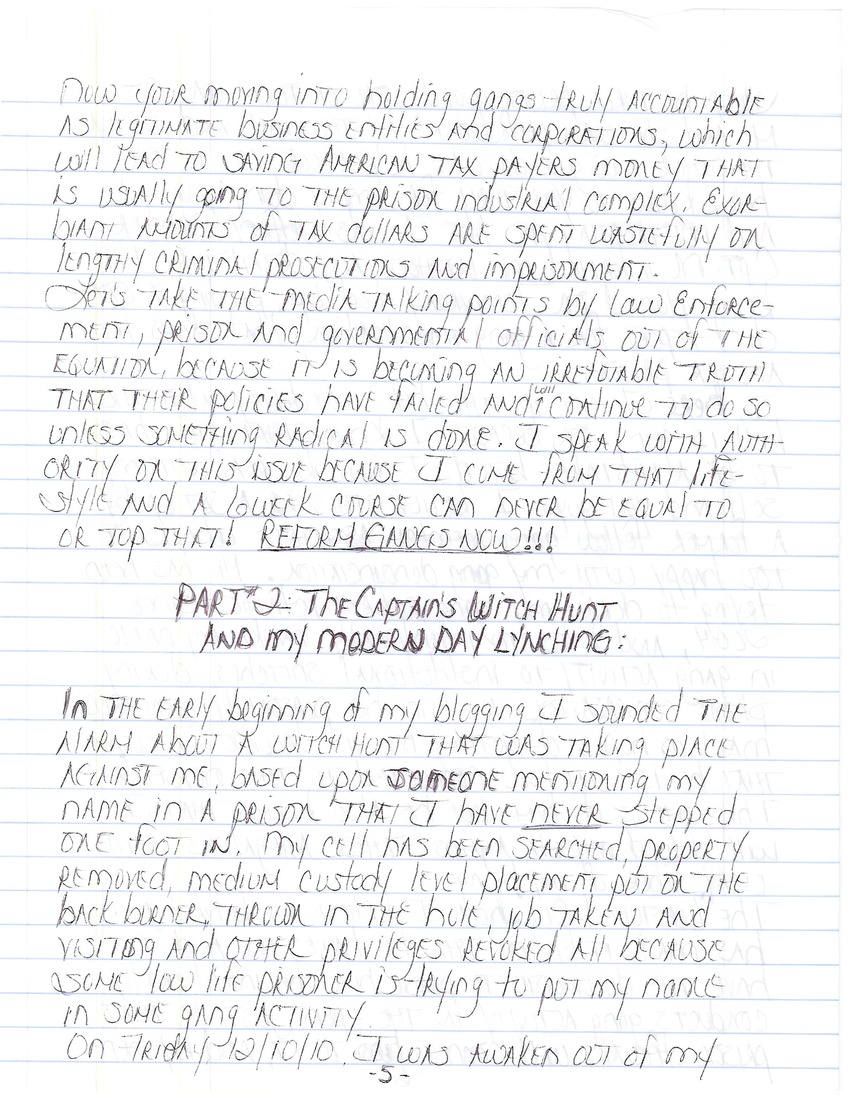 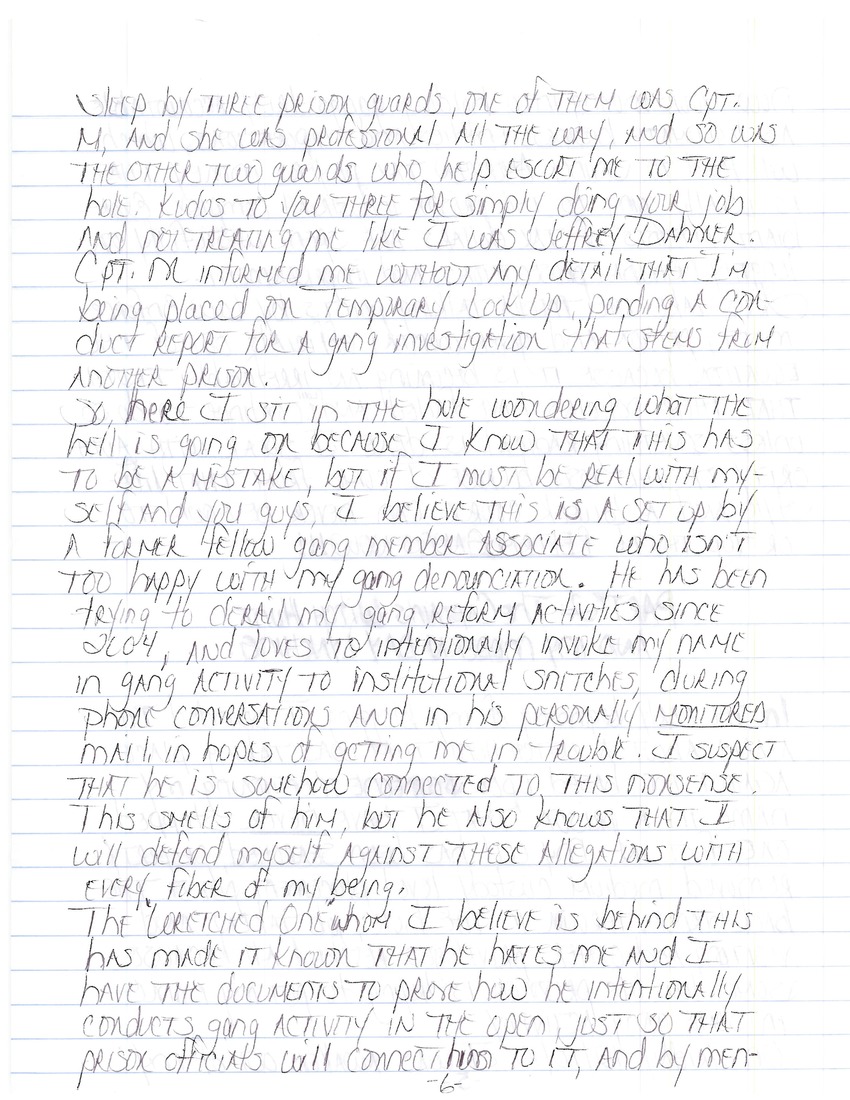 WHY MY DIVORCE FROM MY GANG TOOK SO LONG.

I think every gang member will agree that being gang-affiliated is like [?] And it's an un-healthy marriage to say the least. This kind of marriage demands your undivided attention, allows you to love no one else, except your immediate family and even jealousy roars it's ugly head then. I was a member of my gang and "she" demanded loyalty to her before your family in blood.
In my blindness and misguidance, it never crossed my mind that this was madness, because of the love, unconditional support and understanding the gang provided, My nose was open as the old playas use to say that about brothers who were in love with women who were mistreating them. My blindness was no different from those brothers because it allowed for me to look the other way when confronted with the facts on the ground (e.g. the exploitation, murders, drug dealing, and senseless violence)
As the old saying goes "Love is Blinding," and that love isn't any different or less blinding when it involves gangs. We tell ourselves that there isn't anything wrong with the way we live, think, and act because America has given upon us, we are disenfranchised by race, economics, and class, everyone has their own beliefs, so why shouldn't we and for the street gang like the one I was a part of, which has a history in civil rights and community development.
I deceived myself and others by using the historical connection to honorable and legal activities to justify how we believed. that is and was trick knowledge, and after enough years of witnessing the unconscionable actions of my former gang associates my own justifications began to sound illogical and hollow to my own ears.
I can no longer live on the outside fringes of society and engage in or support behaviors that are unquestionably criminal counterproductive, pathetic, and anti-social. I'm done defending A' culture of death and now I'm that parent, uncle, homeboy, co-worker, or grandparent who is telling you to leave and get yourself out of that unhealthy lifestyle/relationship. Stop allowing your emotions to lead you to and fro. I know that you have invested much blood, sweat, and tears into your gang and it's not easy to walk away, but you have to walk away.
I made my decision at a time when I was enjoying the fruits of my labor; because I made it to a position of serious rank and authority. Nevertheless those fruits will eventually taste sour to you. The amenities that goes along with such a position of authority is like a C.E.O. and who doesn't want to be a Wall Street C.E.O.? You have absolute control over a neighborhood, state, prison, or business and that isn't something easy to walk away from! Dear brothers and sisters walk away, and reform.

WHY DO I STRESS GANG REFORM OVER TOTAL DISBANDING HAS BEEN ASKED BY LAW ENFORCEMENT & PRISON OFFICIALS?

To someone who truly has a complete understanding about gangs this most often question will strike them as a little unrealistic and truly not worthy of discourse but in the interest of understanding and education, I'm compelled to respond it is my opinion, that every measure that has been taken trying to force street gangs and person gangs to disband as been utterly unsuccessful. No government, prison or law enforcement officials can point to any street or prison gang that has disbanded by choice or force due to their efforts and the reason being is that it's a "US AGAINST THEM" mentality on each side.
In addition, many of these young men are affiliates because the gangs give them something that they most likely never had or never will have. Acceptance of who you are, whether it be good or bad is a strong incentive for loyalty. Had the fact that most gangs provide you with clothing, homes, transportation, cash, and friendship only makes walking away from them even more difficult.
So when you have nothing going right in your life, but those gang members are there for you, you never forget that, and asking men to disband from a group that provides such support is unrealistic. I'm a realist and that is one of the reasons I preach reform more than disbanding. You are telling these men to cut their threats and such thinking slaps the law of self-preservation in the face. this recession brought out the ugliness and fears in many people and people who have been law-abiding citizens their entire lives embarked on a course of crime and it was done out of self-preservation. Self-preservation trumps any societal obligations against criminality. To ask gang members to disband completely is asking them to go back to being nothing and that isn't going to happen.
Many of my years were spent watching grown adult men, hardcore murderers, and criminals of every level cry like Harlem sissies when their gangs expelled them for short periods of time or indefinitely. I've also witnessed and personally been responsible for men who had been illiterate, morally bankrupt, drug & alcohol addicts their entire lives transform and reform themselves after meeting fellow gang members who didn't engage in such behaviors. You can never force a man to stop loving what has caused a profound change in their meaningless lives! This is why the mere mention of disbanding is unacceptable on any level for many bangers.
This is why I stress reform, because I know from experience what my former associates are willing to do. If you can convince these men to move away from criminality and anti-social behaviors then half the battle is won. And now you are able to start having serious discussions about the gangs moving away from their nefarious beginnings. See, now your moving into holding gangs truly accountable as legitimate business entities and corporations, which will lead to saving American taxpayers money that is usually going to the prison industrial complex exorbitant amounts of tax dollars are spent wastefully on lengthy criminal persecutions and imprisonment. Let's take the media talking points by law enforcement, prison, and governmental officials out of the equation, because it is becoming an irrefutable truth that their policies have failed and will continue to do so unless something radical is done. I speak with authority on the issue because I come from that lifestyle and a 6-week course can never be equal to or top that! REFORM GANGS NOW!!!

PART #2: THE CAPTAIN'S WITCH HUNT AND MY MODERN DAY LYNCHING:
In the early beginning of my blogging I sounded the alarm about a witch hunt that was taking place against me, based upon someone mentioning my name in a prison that I have never stepped one foot in. My cell has been searched, property removed, medium custody level placement put on the back burner, thrown in the hole, a job taken and visiting and other privileges revoked al because some low life prisoner is trying to put my name in some gang activity.
On Friday 12/10/10 I was awaken out of my sleep by three prison guards, one of them was Cpt. M, and she was professional all the way, and so was the other two guards who help escort me to the hole. Kudos to you three for simply doing your job and not treating me like I was Jeffrey Dahmer. Cpt. M informed me without any detail that I'm being placed on Temporary Lock-Up, pending a conduct report for a gang investigation that stems from another prison.
So, here I sit in the hole wondering what the hell is going on because I know that this has to be a mistake, but if I must be real with myself and you guys, I believe this is a setup by a former fellow gang member associate who isn't too happy with m gang denunciation. He has been trying to derail my gang reform activities since 2004 and loves to intentionally invoke my name in gang activity to institutional snitches, during phone conversations and in his personally monitored mail, in hopes of getting in trouble. I suspect that he is somehow connected to this nonsense. This smells of him, but he also knows that I will defend myself against these allegations with every fiber of my being.
The corrected one whom I believe is behind this has made it known that he hates me and I have the documents to prove how he intentionally conducts gang activity in the open, just so that prison officials will connect him to it, and by mentioning my name he knows it gives legitimacy to his activities! Prison officials will always believe the worst of me, because of who I used to be. As of now prison officials are buying into this charade but I assure you no amount of hole time will stop my mission to reform gang members, especially the brothers that I once fell, friend. I'll see you in court Cpt. Muraski, and as for the "Corrected One," well played, but you have only won a small victory. I will prevail over your hatin' ass every time, because your actually not that bright to keep up this level of game playing!

P.S. I'm sorry about the delay, but I won't be able to share my novel with you guys until I have access to my typewriter again. Contact me on Facebook at Michael Annie Johnson at Yahoo.com with moral support.