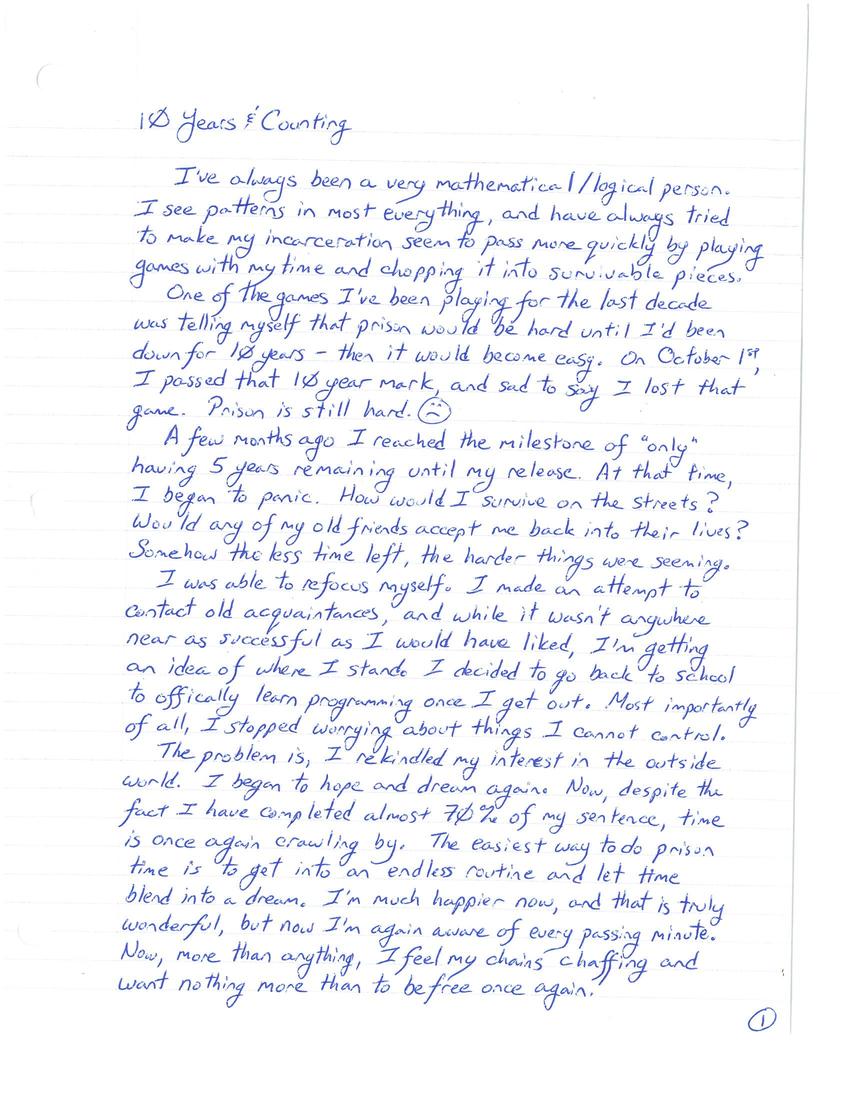 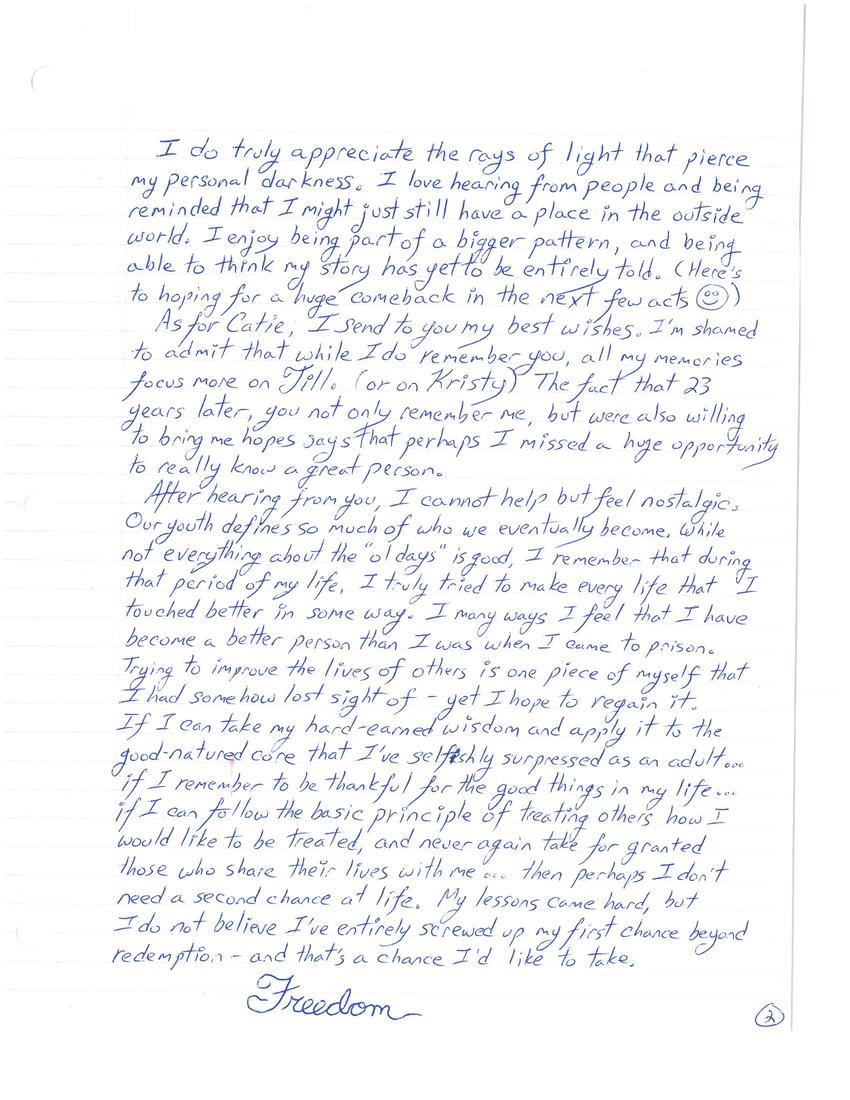 I've always been a very mathematical/logical person.
I see the patterns in almost everything, and have always tried
to make my incarceration seem to pass more quickly by playing
games with my time and chopping it into survivable pieces.

One of the games I've been playing for the last decade
was telling myself that prison would be hard until I'd been
down for 10 years - then it would become easy. On October 1st,
I passed that 10 year mark, and sad to say I lost that game.

A few months ago I reached the milestone of "only"
having 5 years remaining until my release. At that time,
I began to panic. How would I survive on the streets?
Would any of my old friends accept me back into their lives?
Somehow the less time left, the harder things were seeming.

I was able to refocus myself. I made an attempt to contact
old acquaintances, and while it wasn't anywhere near as
successful as I would have liked, I'm getting an idea of
where I stand. I decided to go back to school to officially
learn programming once I get out. Most importantly of all,
I stopped worrying about things I cannot control.

The problem is, I rekindled my interest in the outside world.
I began to hope and dream again. Now, despite the fact I have
completed almost 70% of my sentence, time is once again crawling
by. The easiest way to do prison time is to get into an endless
routine and let time blend into a dream. I'm much happier now,
and that is truly wonderful, but now I'm again aware of every
passing minute. Now, more than anything, I feel my chains chaffing
and want nothing more than to be free once again.

I do truly appreciate the rays of light that pierce my personal
darkness. I love hearing from people and being reminded that I
might just still have a place in the outside world. I enjoy being
part of a bigger pattern, and being able to think my story has yet
to be entirely told. (Here's to hoping for a huge comeback in the
next few acts :) )

As for Catie, I send to you my best wishes. I'm shamed to admit that
while I do remember you, all my memories focus more on Jill. (or on Kristy).
The fact that 23 years later, you not only remember me, but were also
willing to bring me hopes says that perhaps I missed a huge opportunity
to really know a great person.

After hearing from you, I cannot help but feel nostalgic. Our youth defines
so much of who we eventually become, while not everything about the "ol days"
is good, I remember that during that period of my life, I truly tried to make
every life that I touched better in some way. In many ways I feel that I have
become a better person that I was when I came to prison. Trying to improve
the lives of others is one piece of myself that I had somehow lost sight of -
yet I hope to regain it. If I can take my hard-earned wisdom and apply it to the
good-natured core that I've selfishly suppressed as an adult... if I remember to
be thankful for the good things in my life... if I can follow the basic principle
of treating others how I would like to be treated, and never again take for granted
those who share their lives with me... then perhaps I don't need a second chance at
life. My lessons came hard, but I do not believe I've entirely screwed up my first
chance beyond redemption - and that's a chance I'd like to take.

This was my first transcription and it was insightful reading. I wish you well and good luck for your journey during and after prison

Tom
As I read your story, it seems to me that you have handled your incarceration in the best way possible, a way that has helped you not only to deal with prison time but to continue to learn and create and develop. I encourage you in the few remaining years of your sentence to take advantage of any and all re-entry programs that might be available. I volunteer as a co-leader of 2 re-entry programs, Threshold and Houses of Healing, both are excellent. Don't be discouraged. Keep growing, writing and hoping. Blessings, B