Approximately A Year Ago... 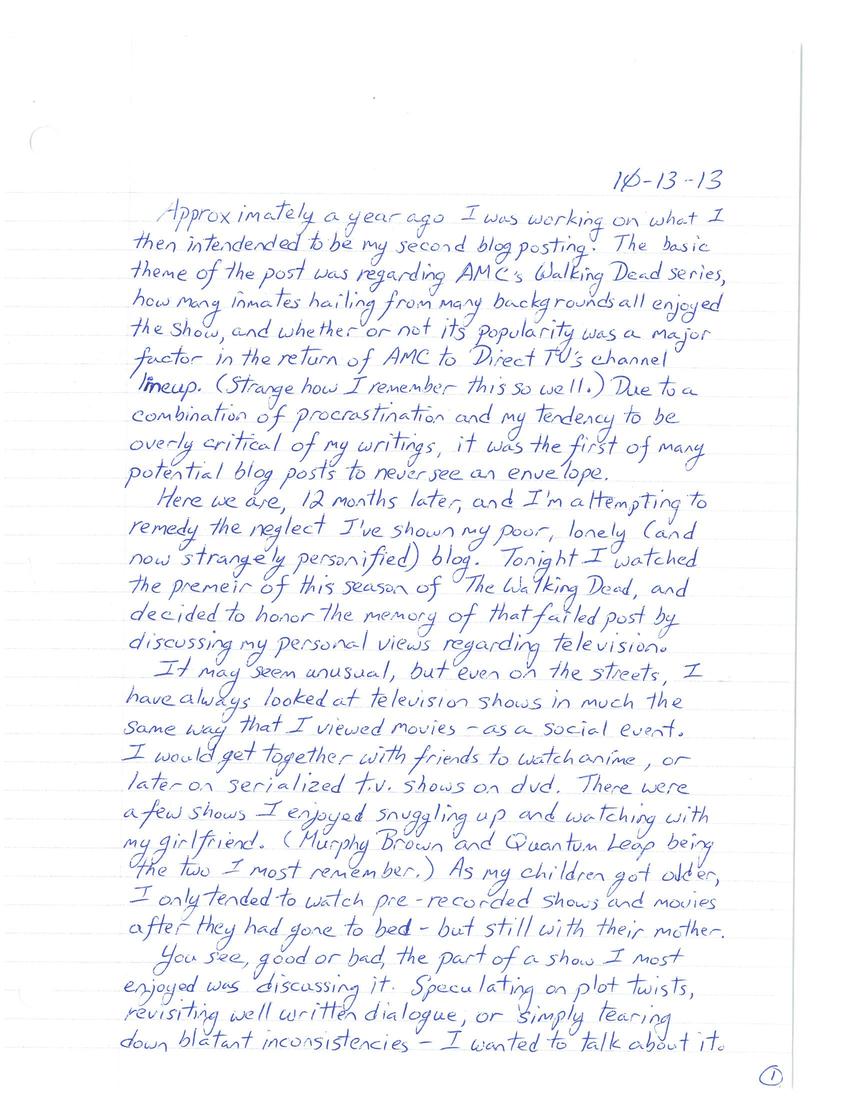 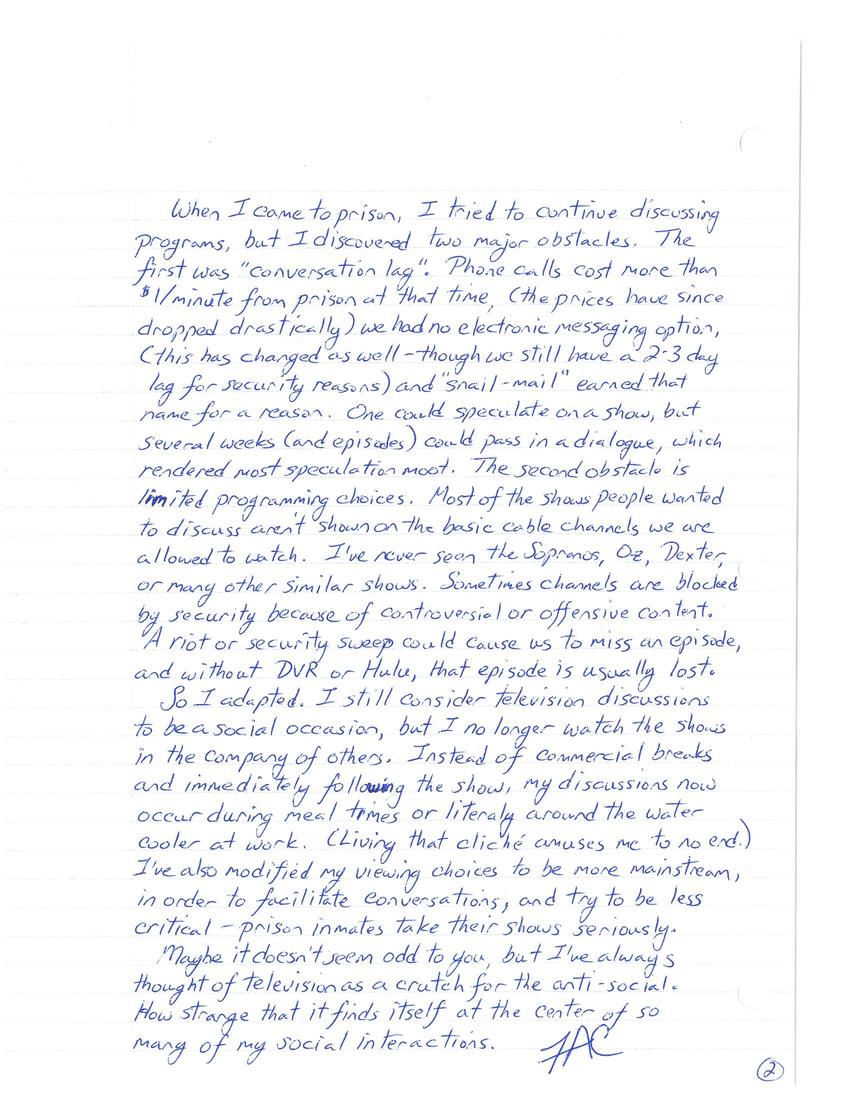 Approximately a year ago I was working on what I then intended to be my second blog posting. The basic theme of the post was regarding AMC's Walking Dead series, how many inmates hailing from many backgrounds all enjoyed the show, and whether or not its popularity was a major factor in the return of AMC to Direct TV's channel lineup. (Strange how I remember this so well.) Due to a combination of procrastination and my tendency to be overly critical of my writings, it was the first of many potential blog posts to never see an envelope.

Here we are, 12 months later, and I'm attempting to remedy the neglect I've shown my poor, lonely (and now strangely personified) blog. Tonight I watched the premiere of this season of The Walking Dead, and decided to honor the memory of that failed post by discussing my personal views regarding television.

It may seem unusual, but even on the streets, I have always looked at television shows in much the same way that I viewed movies - as a social event. I would get together with friends to watch anime, or later on serialized T.V. shows on DVD. There were a few shows I enjoyed snuggling up and watching with my girlfriend. (Murphy Brown and Quantum Leap being the two I most remember.) As my children got older, I only tended to watch pre-recorded shows and movies after they had gone to bed - but still with their mother.

You see, good or bad, the part of a show I most enjoyed was discussing it. Speculating on plot twists, revisiting well written dialogue, or simply tearing down blatant inconsistencies - I wanted to talk about it.

When I came to prison, I tried to continue discussing programs, but I discovered two major obstacles. The first was "conversation lag". Phone calls cost more than $1/minute from prison at that time (the prices have since dropped drastically), we had no electronic messaging option (this has changed as well - though we still have a 2-3 day lag for security reasons) and "snail-mail" earned that name for a reason. One could speculate on a show, but several weeks (and episodes) could pass in a dialogue, which rendered most speculation moot. The second obstacle is limited programming choices. Most of the shows people wanted to discuss aren't shown on the basic cable channels we are allowed to watch. I've never seen The Sopranos, Oz, Dexter, or many other similar shows. Sometimes channels are blocked by security because of controversial or offensive content. A riot or security sweep could cause us to miss an episode, and without DVR or Hulu, that episode is usually lost.

So I adapted. I still consider television discussions to be a social occasion, but I no longer watch the shows in the company of others. Instead of commercial breaks and immediately following the show, my discussions now occur during meal times or literally around the water cooler at work. (Living that cliche amuses me to no end.) I've also modified my viewing choices to be more mainstream, in order to facilitate conversations, and try to be less critical - prison inmates take their shows seriously.

Maybe it doesn't seem odd to you, but I've always thought of television as a crutch for the anti-social. How strange that it finds itself at the center of so many of my social interactions.

Hi Freedom Colberg. I've been wondering if you are the son of Michael Colberg, his mom is Jesse Philson. I am Michael's cousin, Kathy, my mom was Jesse's sister, Eleanor. I don't know if you can let me know if you are related to me on this blog, but if you can, please do. I empathize with the thoughts and feelings you posted here.
(scanned reply – view as blog post)
uploaded May 19, 2015.  Original (PDF) 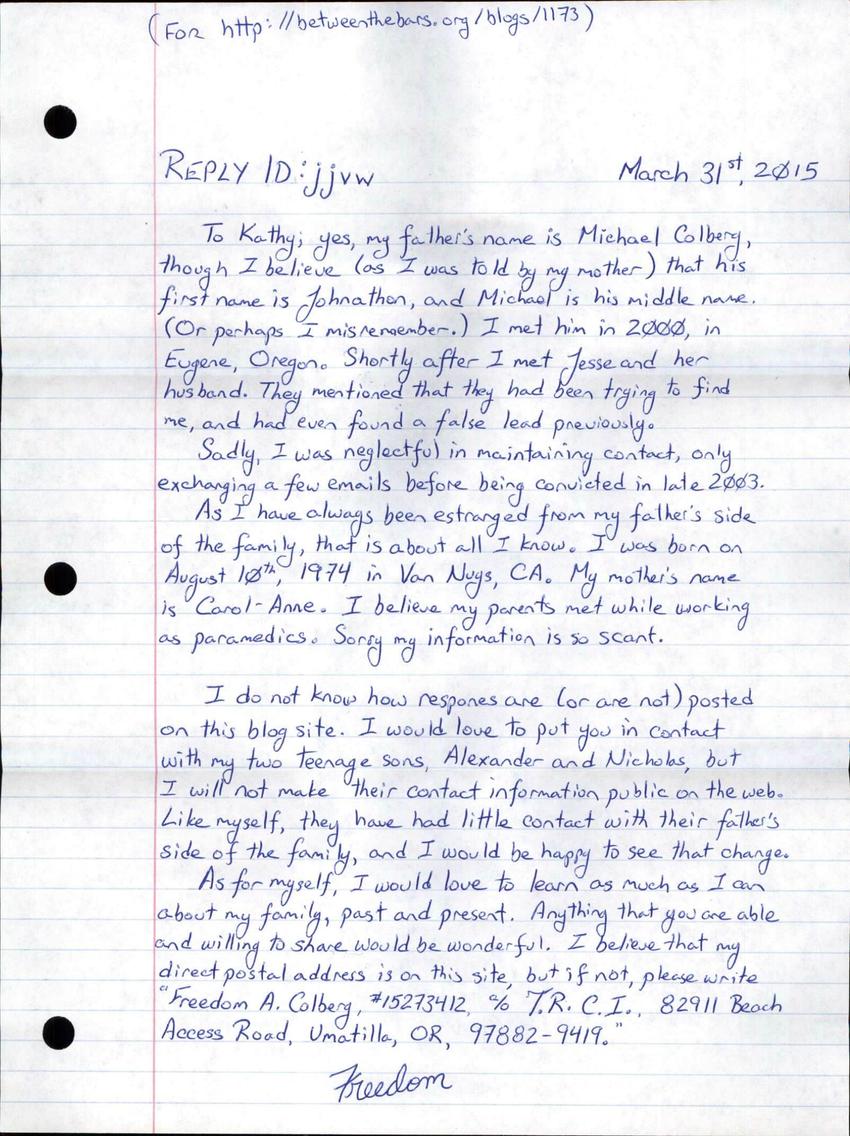