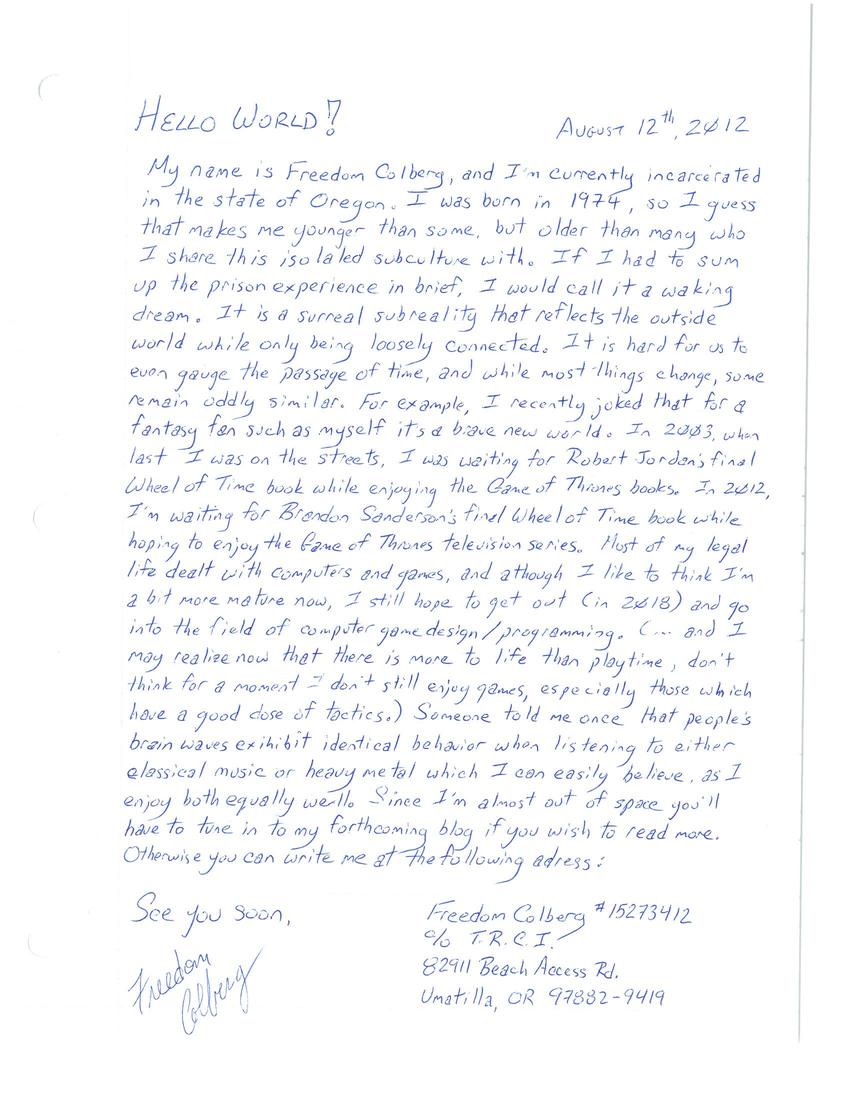 My name is Freedom Colberg, and I'm currently incarcerated
in the state of Oregon. I was born in 1974, so I guess
that makes me younger than some, but older than many who
I share this isolated subculture with. If I had to sum
up the prison experience in brief, I would call it a waking
dream. It is a surreal sub reality that reflects the outside
world while only being loosely connected. It is hard for us to
even gauge the passage of time, and while most things change, some
remain oddly similar. For example, I recently joked that for a
fantasy fan such as myself its a brave new world. In 2003 when
last I was on the streets. I was waiting for Robert Jordon's final
Wheel of Time book while enjoying the Game of Thrones books. In 2012
I'm waiting for Brandon Sanderson's final wheel of time book while
hoping to enjoy the Game of Thrones television series. Most of my legal
life dealt with computers and games, and although I liked to think I'm
a bit more mature now, I still hope to get out (in 2018) and go
into the field of computer game design/ programming. (... and I
may realize now that there is more to life than playtime, don't
think for a moment I don't still enjoy games, especially those which
have a good does of tactics.) Someone told me once that people's
brain waves exhibit identical behavior when listening to either
classical music or heavy metal which I can easily believe as I
enjoy both equally well. Since I'm almost out of space you'll
have to tune in to my forthcoming blog if you wish to read more.
Otherwise you can write me at the following address:

We knew each other in High School and I have always wondered what happened to you. I expected to see you in the online universe for sure, but alas I now know why you have been absent.

What are you in for if you don't mind me...an anonymous pal from your past asking? You are such an intelligent person I can only imagine it was a bank robbery or maybe a white collar crime like wire fraud? I don't know. I can't believe you are in there for so long.

I've seen photos of one of your boys (I don't know if you have more or not) and he takes after you so much.

Despite being incarcerated, I hope you are well and get a chance to study and read as much as possible. I don't really know how this thing works or if you can even reply...but if you can please blog some more. I'd like to know that you are ok. 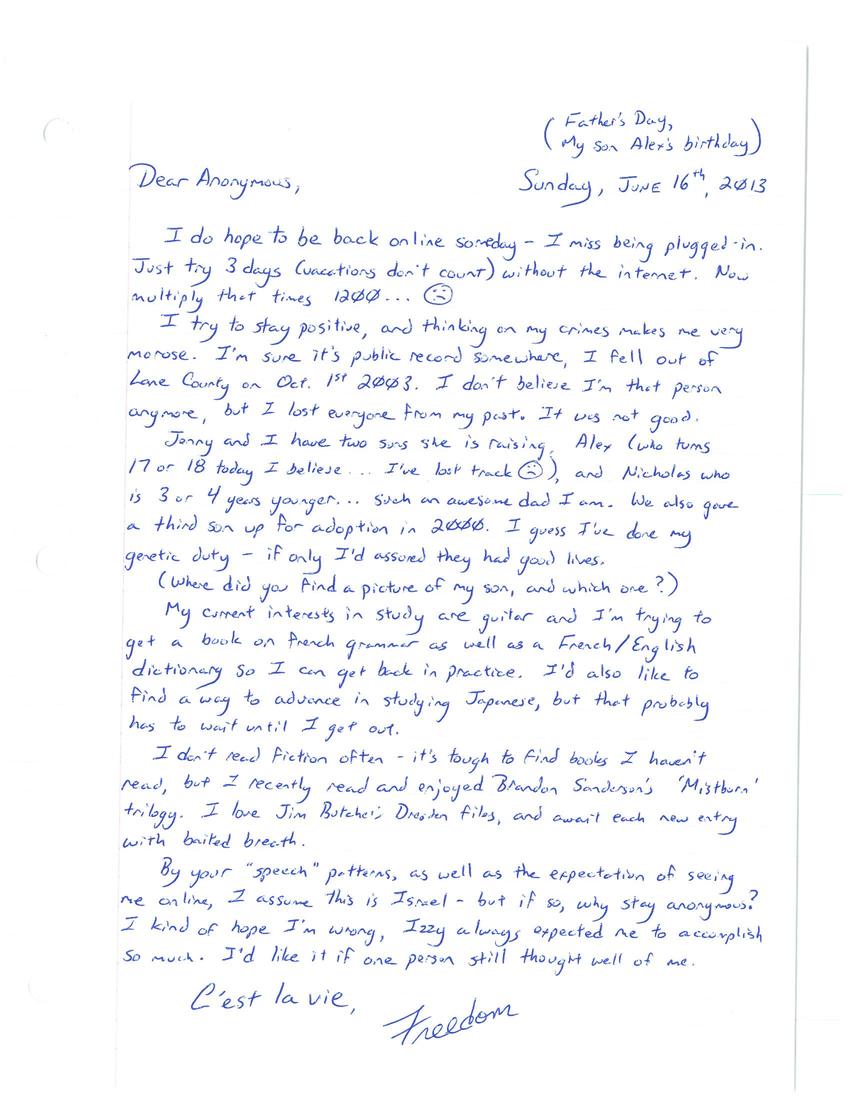 I'm an old friend from high school. It's Catie....Jill and I hung out with you all the time. I would love to see how you are. Sorry you are in for so long but you haven't lost all your friends man. You made a mistake, you're learning from it and you'll move on to a better person than when you started out in this mess.

I had no idea you had kids. Just do what you need to and when you get out they'll think differently once you've proven yourself. Kids are resilient and very forgiving.

Please let us know you are and correspond. I'll write often if you do the same. Take care.
I am not Izzy. When I was asking around about you I ended up searching the prison's website and saw what you were charged with.

Izzy knows about it now also because we are still in touch and it came up when I was asking about you and then I told him the results of my search. I do not know what he thinks of it all because I know how close you two were and I hated being the bearer of such terrible news and didn't ask how he felt.

I saw photos of both of your sons on a networking website because I'm in touch with Jennifer also.

I know Japanese because I lived there for five years, it is tough.

Anyway, I think it best to end this correspondence with that. I wish I could offer you words of support, but I am not in a position to do so for obvious reasons.