Travels And Exploits Of Michael A. Quinones... 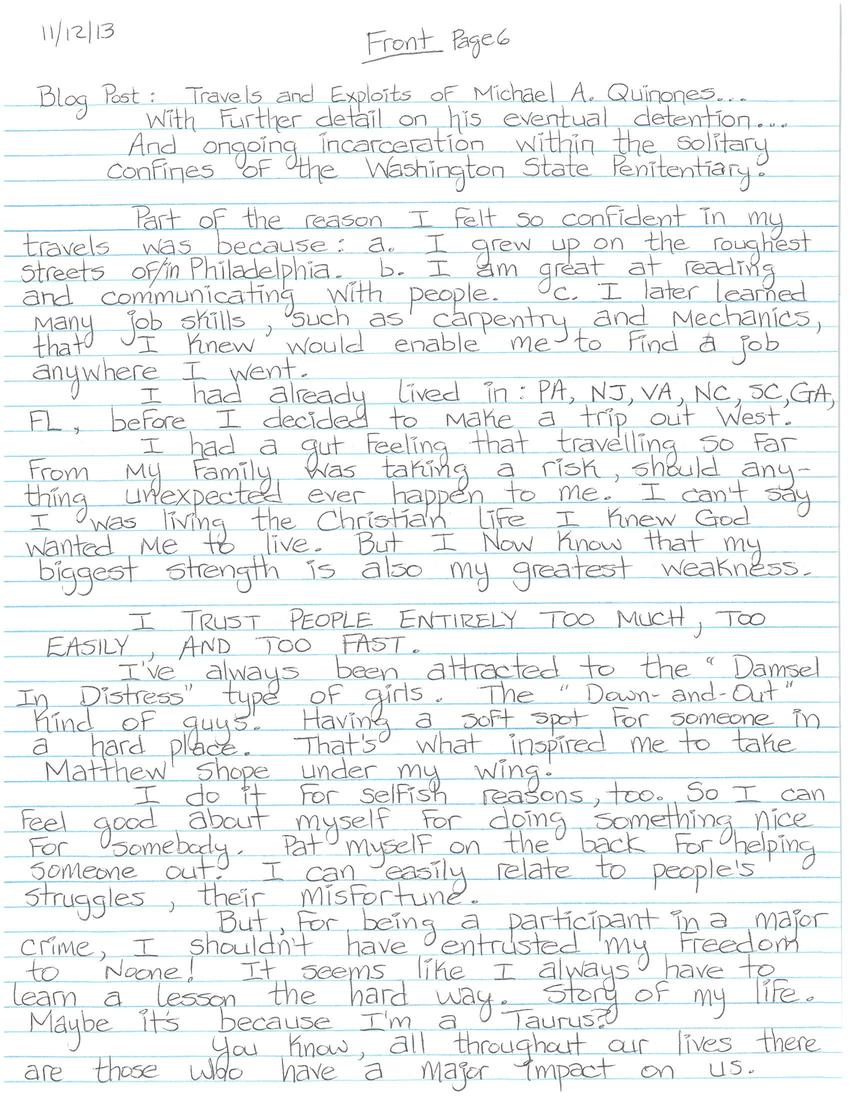 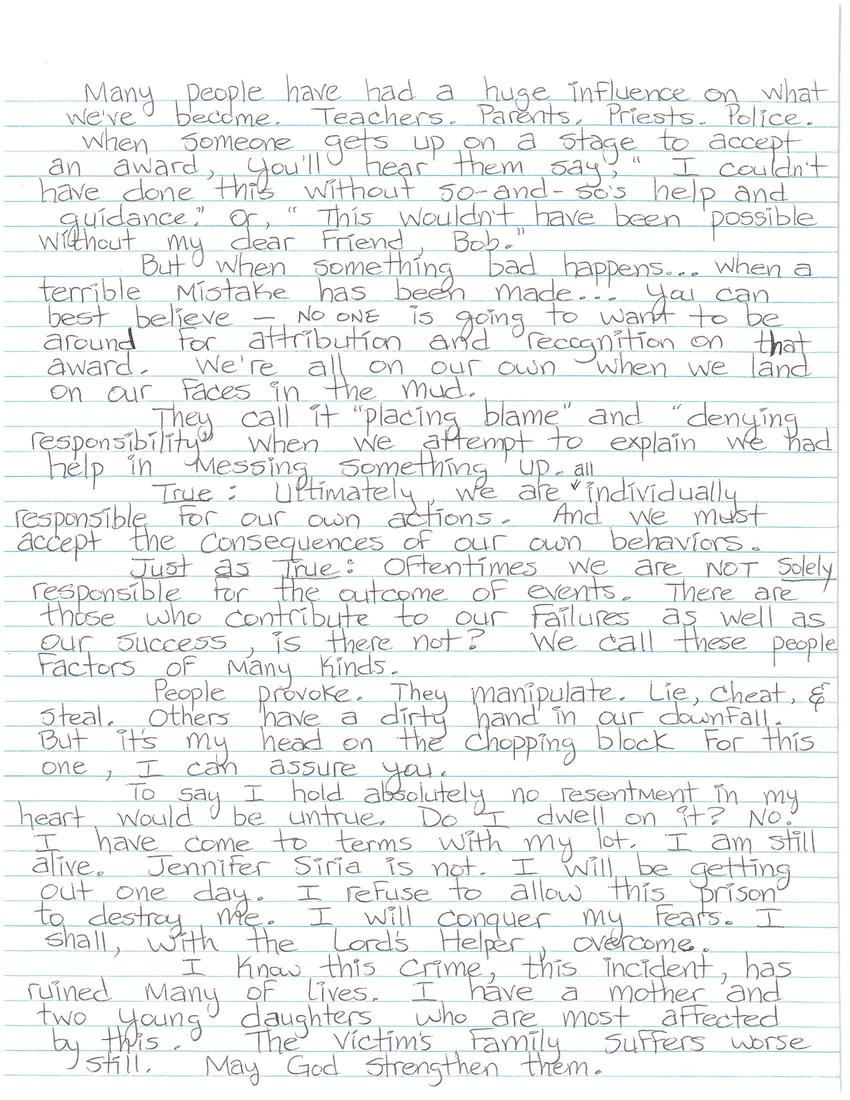 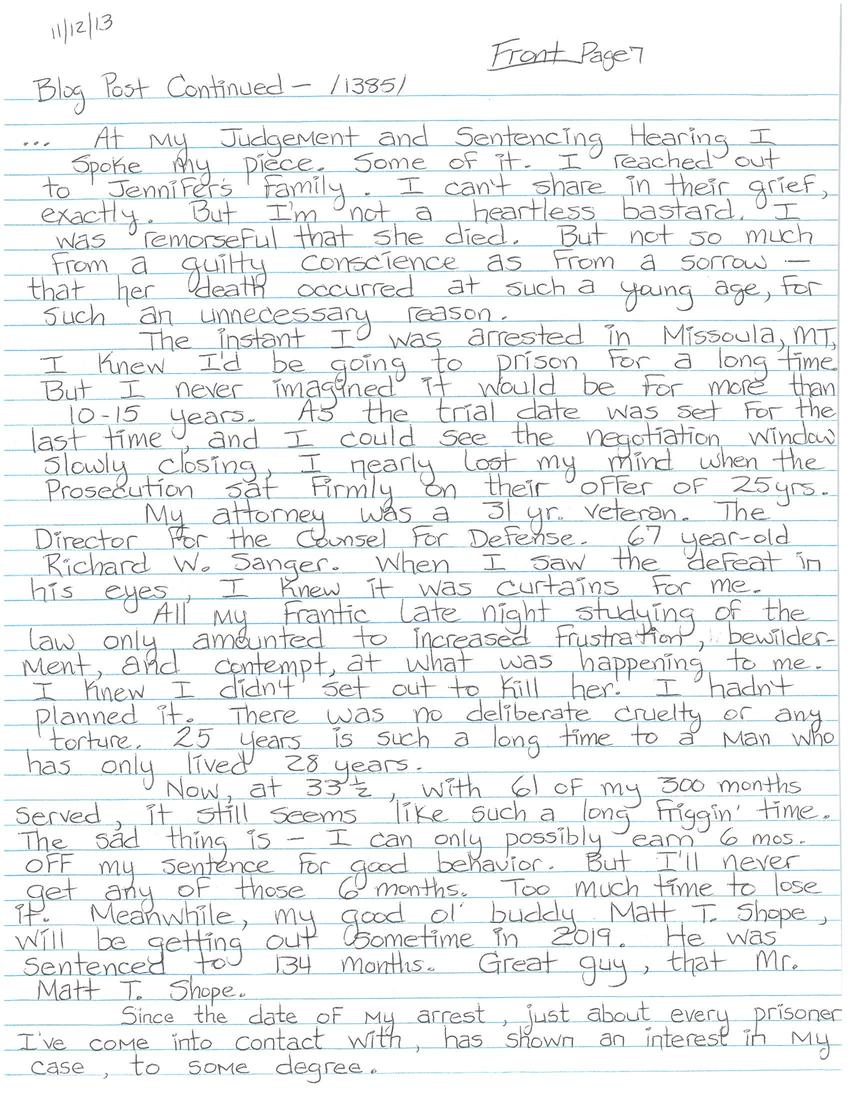 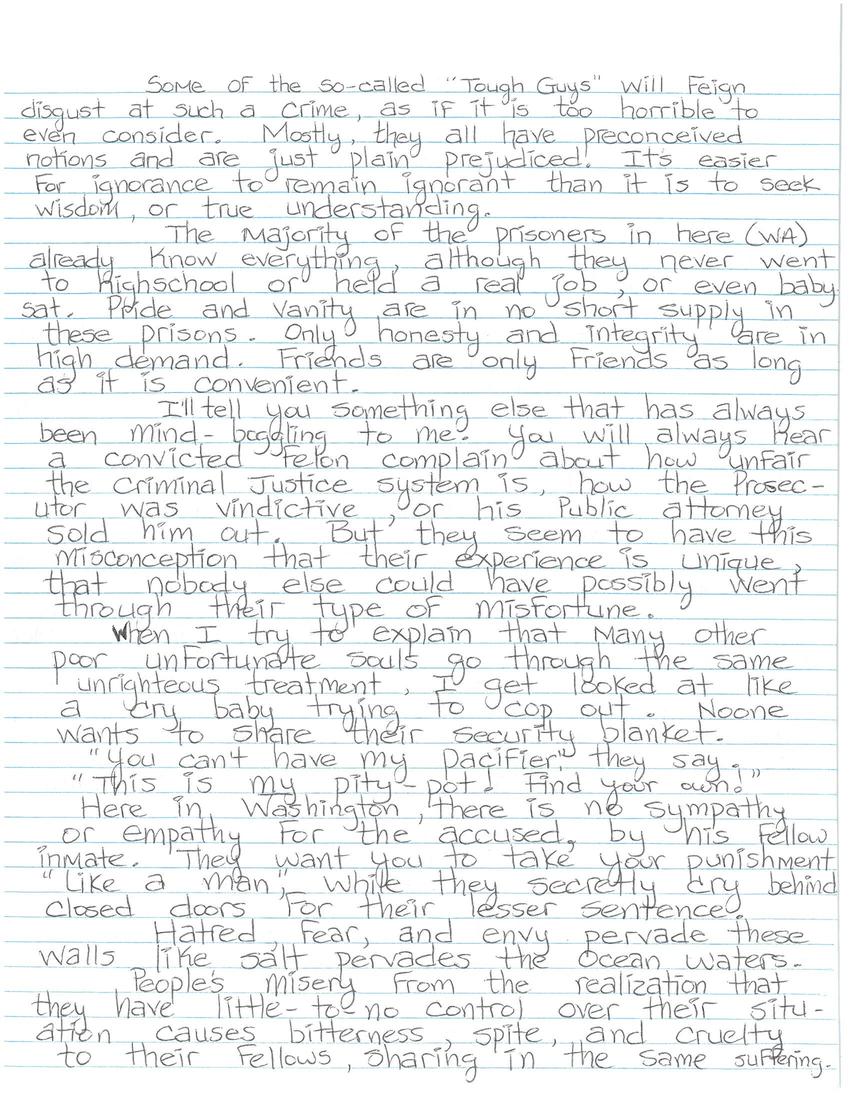 Blog Post: Travels and Exploits of Michael A. Quinones...
With further detail on his eventual detention...
And ongoing incarceration within the solitary confines of the Washington State Penitentiary.

Part of the reason I felt so confident in my travels was because: a. I grew up on the roughest streets of/in Philadelphia. b. I am great at reading and communicating with people. c. I later learned many job skills, such as carpentry and mechanics, that I knew would enable me to find a job anywhere I went.

I had a gut feeling that travelling so far from my family was taking a risk, should anything unexpected ever happen to me. I can't say I was living the Christian life I knew God wanted me to live. But I now know that my biggest strength is also my greatest weakness.

I TRUST PEOPLE ENTIRELY TOO MUCH, TOO EASILY, AND TOO FAST.

I've always been attracted to the "Damsel in Distress" type of girls. The "Down-and-Out" kind of guys. Having a soft spot for someone in a hard place. That's what inspired me to take Matthew Shope under my wing.

I do it for selfish reasons, too. So I can feel good about myself for doing something nice for somebody. Pat myself on the back for helping someone out. I can easily relate to people's struggles, their misfortune.

But, for being a participant in a major crime, I shouldn't have entrusted my freedom to no one! It seems like I always have to learn a lesson the hard way. Story of my life. Maybe it's because I'm a Taurus?

You know, all throughout our lives there are those who have a major impact on us. Many people have had a huge influence on what we've become. Teachers. Parents. Priests. Police. When someone gets up on a stage to accept an award, you'll hear them say, "I couldn't have done this without so-and-so's help and guidance." Or, "This wouldn't have been possible without my dear friend, Bob."

But when something bad happens... when a terrible mistake has been made... you can best believe - no one is going to want to be around for attribution and recognition on that award. We're all on our own when we land on our faces in the mud.

They call it "placing blame" and "denying responsibility" when we attempt to explain we had help in messing something up.

TRUE: Ultimately, we are all individually responsible for our own actions. And we must accept the consequences of our own behaviors.

JUST AS TRUE: Oftentimes we are not SOLELY responsible for the outcome of events. There are those who contribute to our failures as well as our success, is there not? We call these people factors of many kinds.

People provoke. They manipulate. Lie, cheat, & steal. Others have a dirty hand in our downfall. But it's my head on the chopping block for this one, I can assure you.

To say I hold absolutely no resentment in my heart would be untrue. Do I dwell on it? No. I have come to terms with my lot. I am still alive. Jennifer Siria is not. I will be getting out one day. I refuse to allow this prison to destroy me. I will conquer my fears. I shall, with the Lord's Helper, overcome.

I know this crime, this incident, has ruined many of lives. I have a mother and two young daughters who are most affected by this. The victim's family suffers worse still. May God strengthen them.

At my judgement and sentencing hearing I spoke my piece. Some of it. I reached out to Jennifer's family. I can't share in their grief, exactly. But I'm not a heartless bastard. I was remorseful that she died. But not so much from a guilty conscience as from a sorrow - that her death occurred at such a young age, for such an unnecessary reason.

The instant I was arrested in Missoula, MT, I knew I'd be going to prison for a long time. But I never imagined it would be for more than 10-15 years. As the trial date was set for the last time, and I could see the negotiation window slowly closing, I nearly lost my mind when the prosecution sat firmly on their offer of 25 yrs.

My attorney was a 31 yr. veteran. The Director for the Counsel for Defense. 67 year-old Richard W. Sanger. When I saw the defeat in his eyes, I knew it was curtains for me.

All my frantic late night studying of the law only amounted to increased frustration, bewilderment, and contempt, at what was happening to me. I knew I didn't set out to kill her. I hadn't planned it. There was no deliberate cruelty or any torture. 25 years is such a long time to a man who has only lived 28 years.

Since the date of my arrest, just about every prisoner I've come into contact with, has shown an interest in my case, to some degree.

Some of the so-called "tough guys" will feign disgust at such a crime, as if it is too horrible to even consider. Mostly, they all have preconceived notions and are just plain prejudiced. It's easier for ignorance to remain ignorant than it is to seek wisdom, or true understanding.

The majority of the prisoners in here (WA) already know everything, although they never went to high school or held a real job, or even babysat. Pride and vanity are in no short supply in these prisons. Only honesty and integrity are in high demand. Friends are only friends as long as it is convenient.

I'll tell you something else that has always been mind-boggling to me. You will always hear a convicted felon complain about how unfair the criminal justice system is, how the prosecutor was vindictive, or his public attorney sold him out. But they seem to have this misconception that their experience is unique, that nobody else could have possibly went through their type of misfortune.

When I try to explain that many other poor unfortunate souls go through the same unrighteous treatment, I get looked at like a crybaby trying to cop out. No one wants to share their security blanket. "You can't have my pacifier", they say. "This is MY pity-pot! Find your own!" Here in Washington, there is no sympathy or empathy for the accused, by his fellow inmate. They want you to take your punishment "like a man", while they secretly cry behind closed doors for their lesser sentence.

Hatred, fear, and envy pervade these walls, like salt pervades the ocean waters.

People's misery from the realization that they have little-to-no control over their situation causes bitterness, spite, and cruelty to their fellows, sharing in the same suffering.