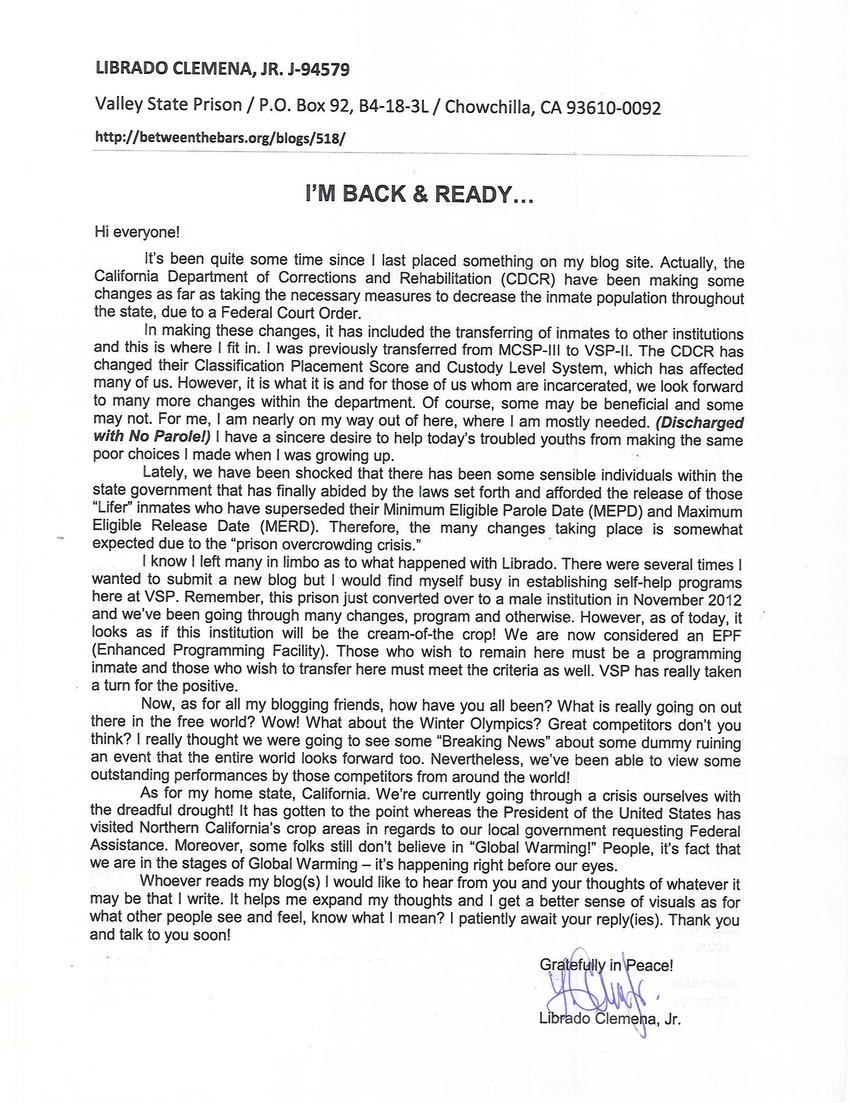 I'm Back and Ready

It's been quite some time since I last placed something on my blog. Actually, the California Department of Corrections and Rehabilitation (CDCR) have been making some changes as far as taking the necessary measures to decrease the inmate population throughout the state, due to a federal court order. In making these changes, it has included the transferring of inmates to other institutions and this is where I fit in.

I was previously transferred from MSCP-III to VSP-II. The CDCR has changed their classification placement score and custody level system, which has affected many of us. However, it is what it is. For those of us whom are incarcerated, we look forward to many more changes within the department. Of course, some may be beneficial and some may not. For me, I am nearly on my way out of here, where I am mostly needed. Discharged with No Parole! I have a sincere desire to help today's troubled youths from making the same poor choices I made when I was growing up.

Lately, we have been shocked that there has been some sensible individuals within the state government that have finally abided by the laws set forth and afforded the release of those "lifer" inmates who have superseded their minimum eligible parole date (MEPD) and maximum eligible release date (MERD). Therefore, the many changes taking place are somewhat expected due to the prison "overcrowding crisis."

I know I left many in limbo as to what happened with Librado. There were several times I wanted to submit a new blog post, but I would find myself busy in establishing self-help programs here at VSP. Remember, this prison just converted over to a male institution in November 2012, and we've been going through many changes, programs and otherwise. However, as of today, it looks as if this institution will be the cream of the crop! We are now considered an EPF (enhanced programming facility). Those who wish to remain here must be a programming inmate and those who wish to transfer here must meet the criteria as well. VSP has really taken a turn for the positive.

Now, as for all my blogging friends, how have you all been? What is really going on out there in the free world? Wow! What about the Winter Olympics? Great competitors, don't you think? I really thought we were going to see some "breaking news" about some dummy ruining an event that the entire world looks forward to. Nevertheless, we've been able to view some outstanding performances by those competitors from around the world!

As for my home state, California: we're currently going through a crisis ourselves with the dreadful drought! It has gotten to the point where the President of the United States has visited northern California's crop areas in regards to our local government, requesting federal assistance. Moreover, some folks still don't believe in global warming! People, it's a fact that we are in the stages of global warming. It's happening right before our eyes.

Whoever reads by blog, I would like to hear from you and your thoughts of whatever it may be that I write. It helps me expand my thoughts and I get a better sense of visuals as for what other people see and feel. Know what I mean? I patiently await your reply(ies). Thank you and talk to you soon!