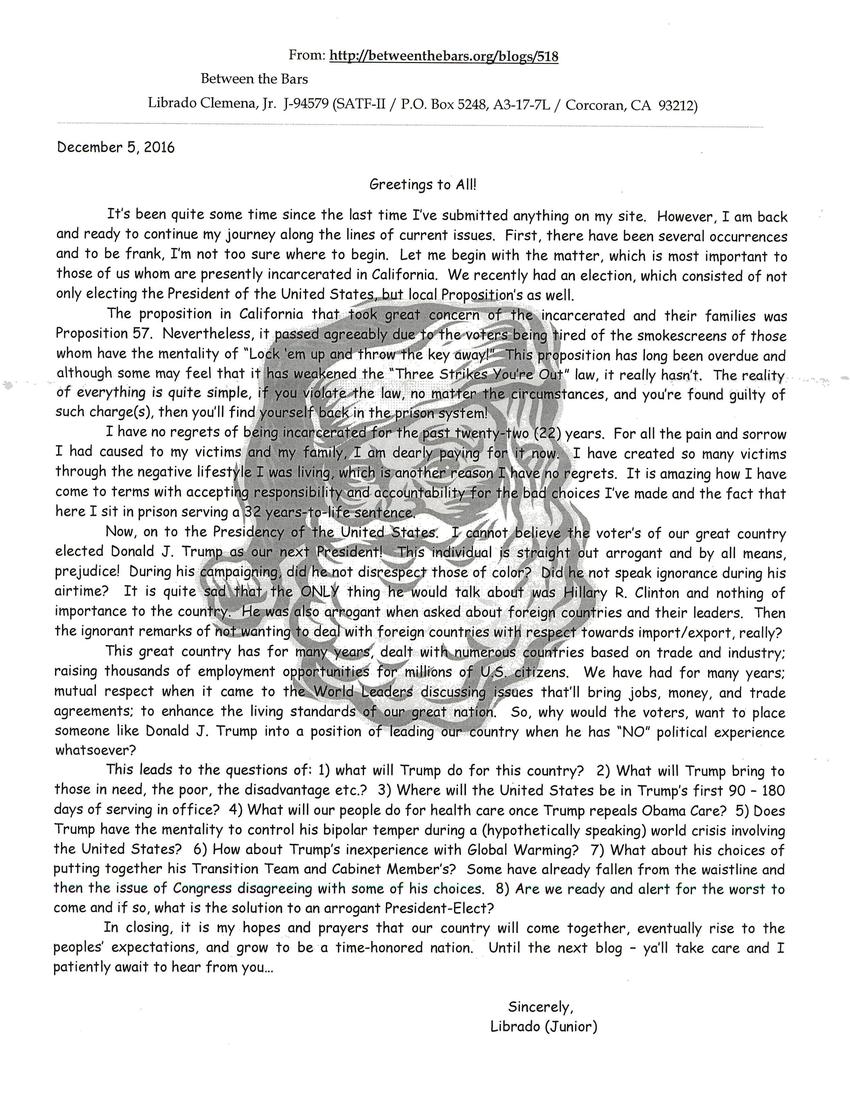 From: http://betweenthebars.org/blogs/518
Between the Bars

It's been quite some time since the last time I've submitted anything on my blog. However, I am back and ready to continue my journey along the lines of current issues.

First, there have been several occurrences and, to be frank, I'm not too sure where to begin. Let me begin with the matter which is most important to those of us whom are presently incarcerated in California. We recently had an election which consisted of not only electing the President of the United States, but local propositions as well. The proposition in California took great concern of the incarcerated and their family was Proposition 57. Nevertheless, it passed agreeably due to the votes being tired of the smokescreens of those whom have the mentality of "Lock 'em up and throw away the key!" This proposition has long been overdue and, although some may feel that it has weakened the "Three Strikes, You're Out" law, it really hasn't. The reality of everything is quite simple. If you violate the law—no matter the circumstances—and you're found guilty of such charge(s), then you'll find yourself back in the prison system!

I have no regrets being incarcerated for the past twenty-two years. For all the pain and sorrow I have caused to my victims and my family, I am dearly paying for it now. I have created so many victims through the negative lifestlye I was living, which is another reason I have no regrets. It is amazing how I have come to terms with accepting responsibility and accountability for the bad choices I've made and the fact that I sit here in prison serving a 32 year-to-life sentence.

Now onto the President of the United States. I cannot believe that the voters of our great country elected Donald J. Trump as our next president! This individual is straight-out arrogant and by all means prejudice! During his campaigning did he not disrespect people of color? Did he not speak ignorance during his airtime? It is quite sad that the ONLY thing he would talk about was Hilary R. Clinton and nothing of the importance of this country. He was also arrogant when asked about foreign countries and their leaders. Then the ignorant remarks of not wanting to deal with foreign countries with respect towards import/export. Really?

This great country has, for many years, dealt with numerous countries based on trade and industry, raising thousands of employment opportunities for millions of US citizens. We have had, for many years, mutual respect when it came to the world leaders discussing issues. So why would the voters want to place someone like Donald J. Trump into a position of leading our country when he has NO political experience whatsoever?

This leads to these questions:
1. What will Trump do for this country?
2. What will Trump bring to those in need, the poor, the disadvantaged, etc.?
3. Where will the United States be in Trump's first 90-180 serving days in office?
4. What will our people do for health care once Trump repeals Obama Care?
5. Does Trump have the mentality to control his bipolar temper during a (hypothetically speaking) world crisis involving the United States?
6. How about Trump's inexperience with global warming?
7. What about his choices of putting together his transition team and cabinet members? Some have already fallen to the wayside and then the issues of Congress disagreeing with some of his choices.
8. Are we ready and alert for the worst to come, and if so, what is the solution to an arrogant president-elect?

In closing, it is my hopes and prayers that our country will come together, eventually rise to the people's expectations, and grow to be a time-honored nation. Until the next blog, ya'll take care and I patiently await to hear from you.