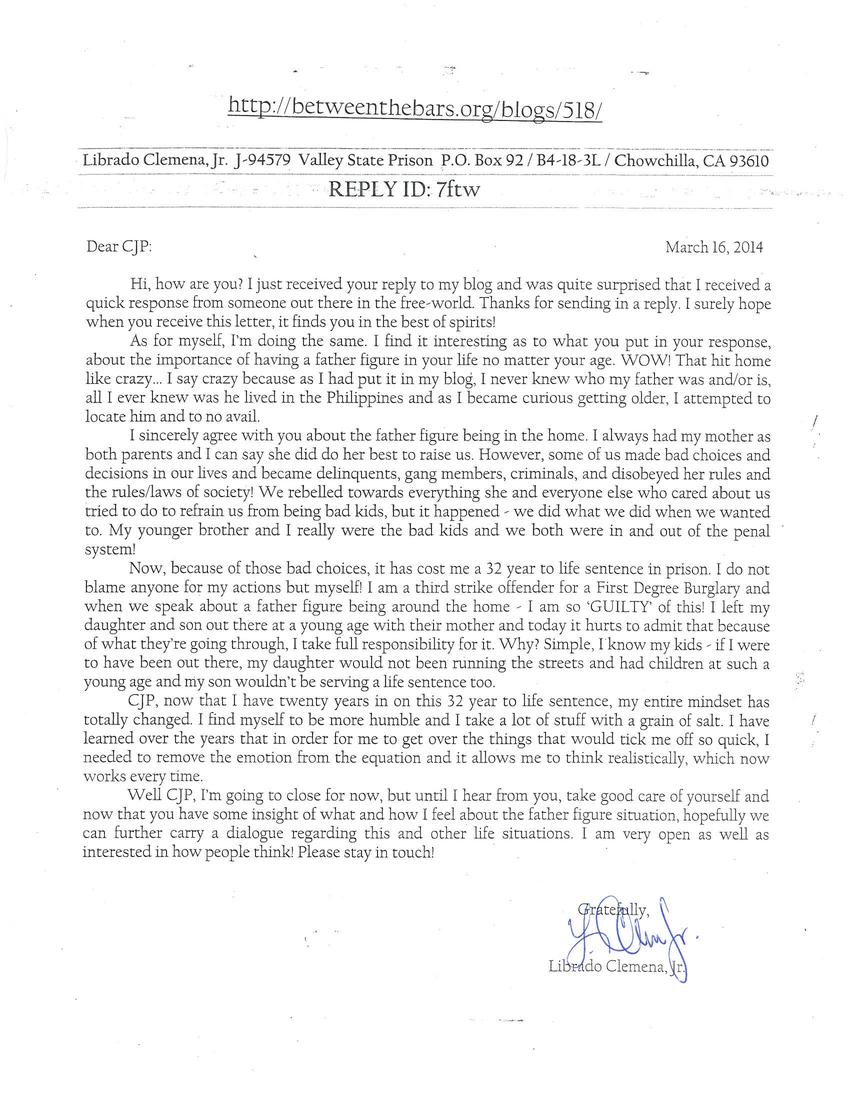 Hi, how are you? I just received your reply to my blog and was quite surprised that I received a quick response from someone out there in the free world. Thanks for sending me a reply. I surely hope when you receive this letter, it finds you in the best of spirits!

As for myself, I'm doing the same. I find it interesting as to what you put in your response about the importance of having a father figure in your life no matter your age. WOW! That hit home like crazy... I say crazy because, as I had put in my blog, I never knew who my father was and/or is all I ever knew was he lived in the Philippines. As I became curious about getting older, I attempted to locate him to no avail.

I sincerely agree with you about the father figure being in the home. I always had my mother as both parents and I can say she did do her best to raise us. However, some of us made bad choices and decisions in our lives and become delinquents, gang members, criminals, and disobeyed her rules and the rules/laws of society! We rebelled toward everything she and everyone else who cared about us tried to do to refrain us from being bad kids, but it happened—we did what we did when we wanted to. My younger brother and I really were the bad kids, and we both were in and out of the penal system!

Now, because of those bad choices, it has cost me at 32 year to life sentence in prison. I do not blame anyone for my actions but myself! I am third strike offender for a first degree burglary. When we speak about a father figure being around the house—I am so GUILTY of this! I left my daughter and son out there at a young age with their mother, and today it hurts to admit that because of what they're going through, I take full responsibility for it. Why? Simple. I know my kids—if I were to have been out there, my daughter would not been running the streets and had children at such a young age, and my son wouldn't be serving a life sentence too.

CJP, now that I have twenty years in on this 32 year to life sentence, my entire mindset has totally changed. I find myself to be more humble and I take a lot of stuff with a grain of salt. I have learned over the years that in order for me to get over the things that would tick me off so quick, I needed to remove the emotion from the equation. It allows me to think realistically, which now works every time.

Well, CJP, I'm going to close for now. Until I hear from you, take good care of yourself. Now that you have some insight of what and how I feel about the father figure situation, hopefully we can further carry a dialogue regarding this and other life situations. I am very open as well as interested in how people think! Please stay in touch!