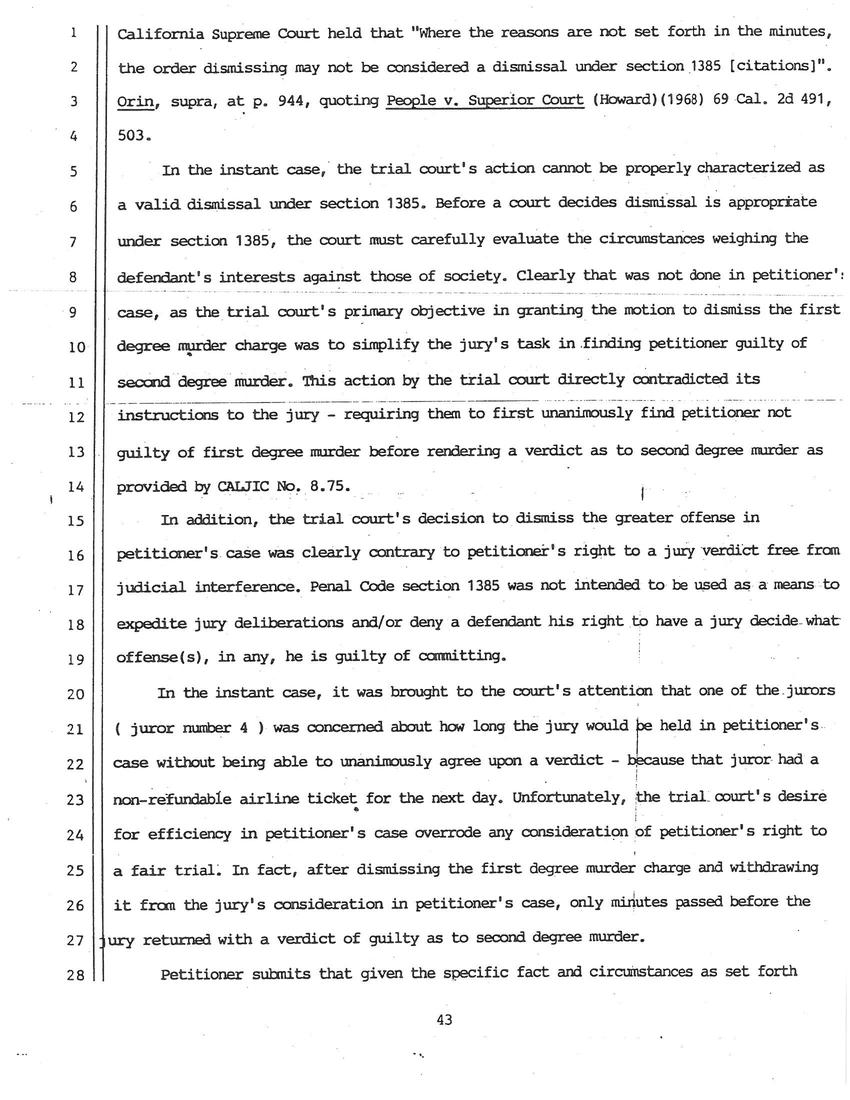 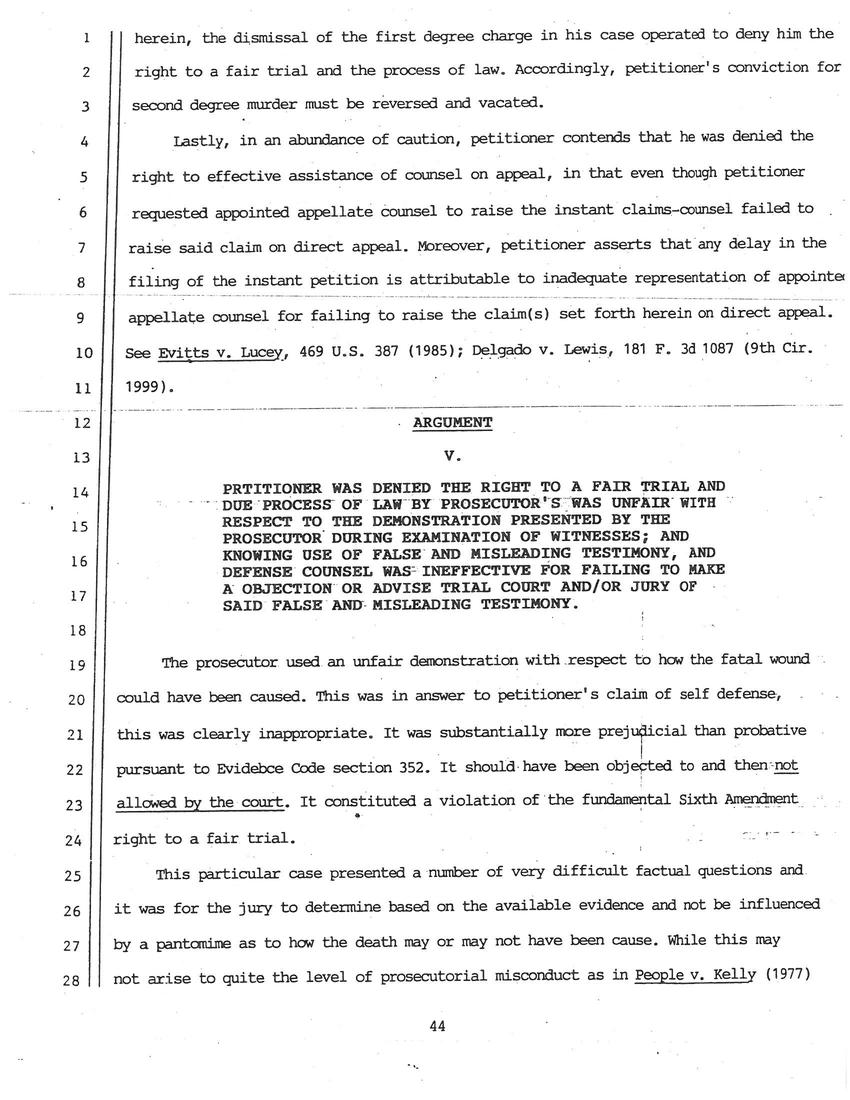 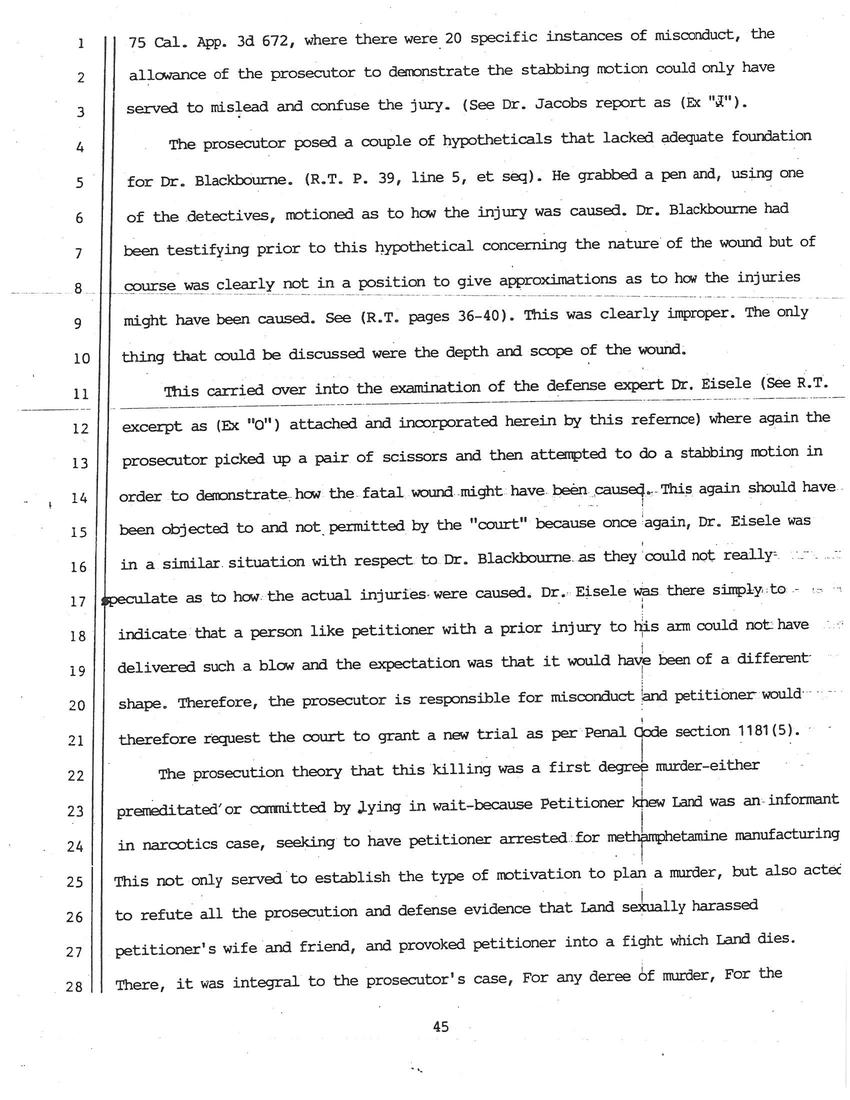 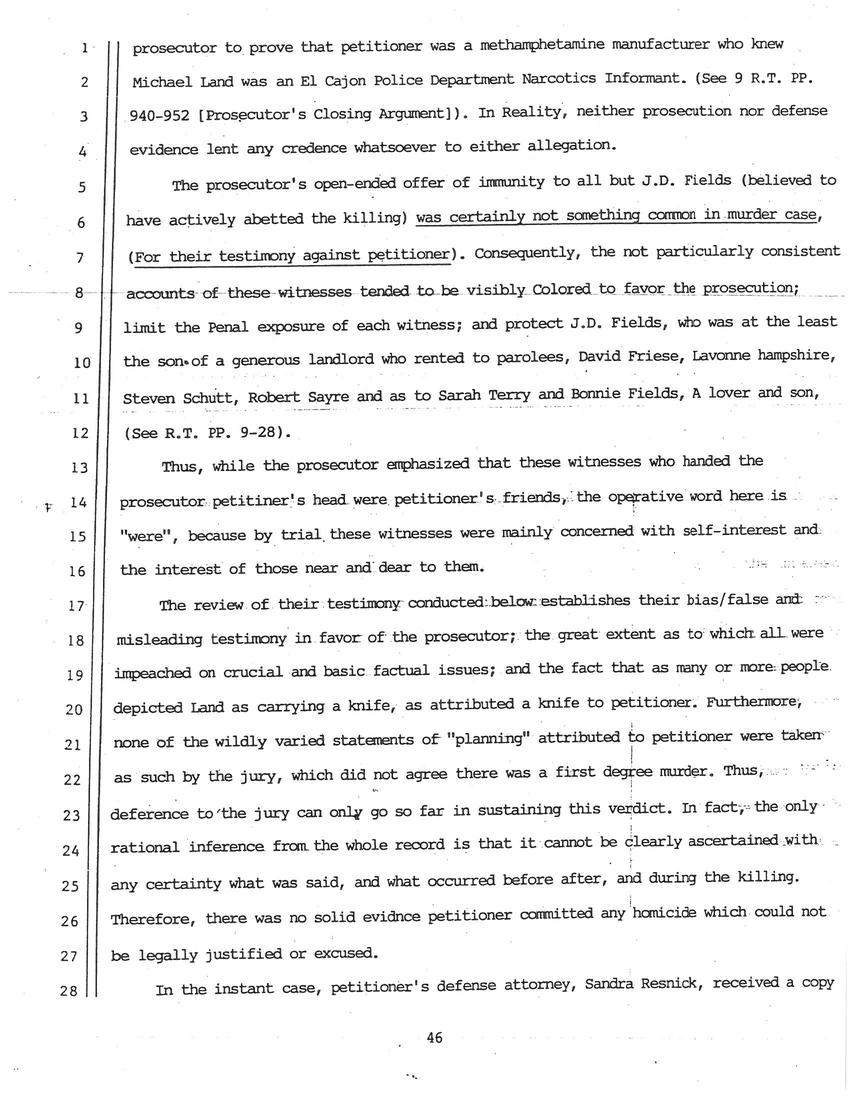 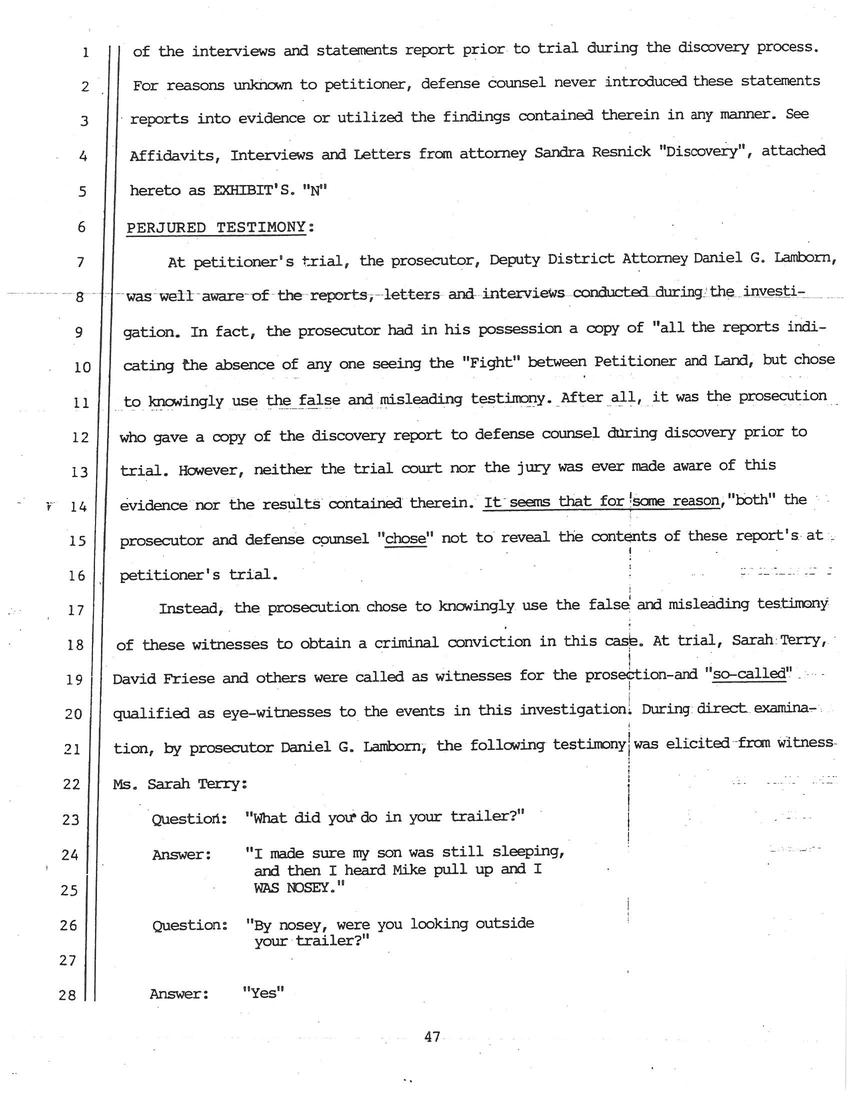 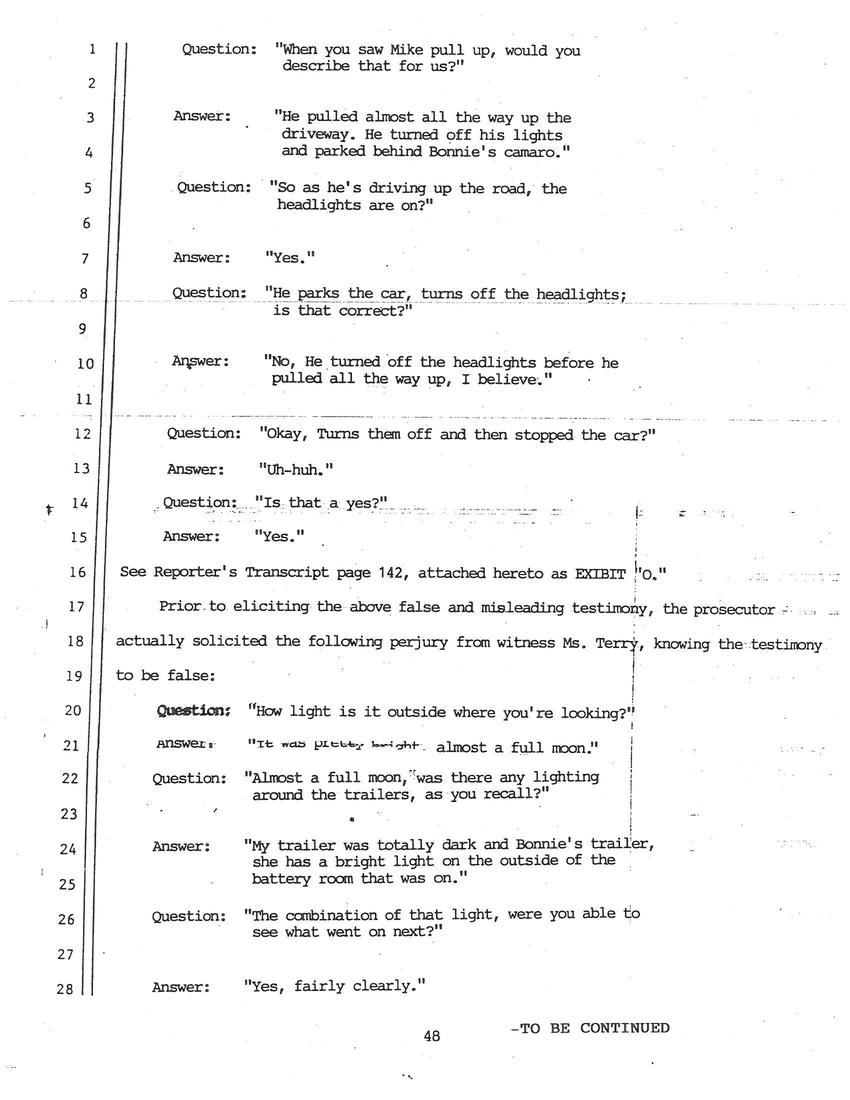 In the instant case, the trial court's action cannot be properly characterized as a valid dismissal under section 1385. Before a court decides dismissal is appropriate under section 1385, the court must carefully evaluate the circumstances weighing the defendant's interests against those of society. Clearly that was not done in petitioner's second degree murder. This action by the trial court directly contradicted its instructions to the jury—requiring them to first unanimously find petitioner guilty of first degree murder before rendering a verdict as to second degree murder as provided by CALJIC No. 8.75.

In addition, the trial court's decision to dismiss the greater offense in petitioner's case was clearly contrary to petitioner's right to a jury verdict free from judicial interference. Penal Code section 1385 was not intended to be used as a means to expedite jury deliberations and/or deny a defendant a right to have a jury decide what offense(s), if any, he is guilty of committing.

In the instant case, it was brought to the court's attention that one of the jurors (juror number 4) was concerned about how long the jury would be held in petitioner's case without being able to unanimously agree upon a verdict—because that juror had a non-refundable airline ticker for the next day. Unfortunately, the trial court's desire for efficiency in petitioner's case overrode any consideration of petitioner's right to a fair trial. In fact, after dismissing the first degree murder charge and withdrawing it from the jury's consideration in petitioner's case, only minutes passed before the jury returned with a verdict of guilty as to second degree murder.

Petitioner submits that given the specific fact and circumstances as set forth herein, the dismissal of the first degree charge in his case operated to deny him the right to a fair trial and the process of law. Accordingly, petitioner's conviction for second degree murder must be reversed and vacated.

Lastly, in an abundance of caution, petitioner contends that he was denied the right to effective assistance of counsel on appeal, in that even though petitioner requested appointed appellate counsel to raise the instant claims, counsel failed to raise said claim on direct appeal. Moreover, petitioner asserts that any delay in the filing of the instant petition is attributable to inadequate representations of appointed appellate counsel for failing to raise the claim(s) set forth herein on direct appeal. See Evitts v. Lucey, 469 U.S. 387 (1985); Delgado v. Lewis, 181 F. 3d 1087 (9th Cir. 1999).

ARGUMENT
V.
PETITIONER WAS DENIED THE RIGHT TO A FAIR TRIAL AND DUE PROCESS OF LAW BY PROSECUTORS WAS UNFAIR WITH RESPECT TO THE DEMONSTRATION PRESENTED BY THE PROSECUTION DURING ELIMINATION OF WITNESSES; AND KNOWING USE OF FALSE AND MISLEADING TESTIMONY, AND DEFENSE COUNSEL WAS INEFFECTIVE FOR FAILING TO MAKE AN OBJECTION OR ADVISE TRIAL COURT AND/OR JURY OF SAID FALSE AND MISLEADING TESTIMONY.

The prosecutor used an unfair demonstration with respect to how the fatal wound could have been caused. This was in answer to petitioner's claim of self-defense; this was clearly inappropriate. It was substantially more prejudicial than probative pursuant to Evidence Code section 352. It should have been objected to and then not allowed by the court. It constituted a violation of the fundamental Sixth Amendment right to a fair trial.

This particular case presented a number of very difficult factual questions and it was for the jury to determine based on the available evidence and not be influenced by a pantomime as to how the death may or may not have been caused. While this may not arise to quite the level of prosecutorial misconduct as in People v. Kelly (1977) 75 Cal. App. 3d 672, where there were 20 specific instances of misconduct, the allowance of the prosecutor to demonstrate the stabbing motion could only have served to misled and confuse the jury. (See Dr. Jacobs report as (Ex ")(")).

The prosecutor posed a couple of hypotheticals that lacked adequate foundation for Dr. Blackbourne. (R.T. p. 39, line 5, et seq.) He grabbed a pen and, using one of the detectives, motioned as to how the injury was caused. Dr. Blackbourne had been testifying prior to this hypothetical concerning the nature of the wound but of course was clearly not in a position to give approximations as to how the injuries might have been caused. See (R.T. pages 36-40). This was clearly improper. The only thing that could be discussed ere the depth and scope of the wound.

This carried over into the examination of the defense expert Dr. Eisele (see R.T. excerpt as (Ex "O")) attached and incorporated herein by this reference) where again the prosecutor picked up a pair of scissors and then attempted to do a stabbing motion in order to demonstrate how the fatal wound might have been caused. This again should have been objected to and not permitted by the "court" because once again, Dr. Eisele was in a similar situation with respect to Dr. Blackbourne as they could not really speculate as to how the actual injuries were caused. Dr. Eisele was simply there to indicate that person like petitioner with a prior injury to his arm could not have delivered such a blow and the expectation was that it would have been of a different shape. Therefore, the prosecutor is responsible for misconduct and petitioner would therefore request the court to grant a new trial as per Penal Code section 1181(5).

The prosecution theory that this killing was a first degree murder—either premeditated or committed by lying in wait—because petitioner knew Land was an informant. This not only served to establish the type of motivation to plan a murder, but also acted to refute all the prosecution and defense evidence that Land sexually harassed petitioner's wife and friend, and provoked petitioner into a fight which Land dies. There, it was integral to the prosecutor's case, for any degree of murder, for the prosecutor to prove that petitioner was a methamphetamine manufacturer who knew Michael Land was an El Cajon Police Department Narcotics Informant. (See 9 R.T. pp. 940-952 [Prosecutor's Closing Argument]). In reality, neither prosecution nor defense evidence lent any credence whatsoever to either allegation.

The prosecutor's open-ended offer was immunity to all but J.D. Fields (believed to have actively abetted the killing) was certainly not something common in murder case, (for their testimony against petitioner). Consequently, the not particularly consistent accounts of these witnesses tended to be visibly colored to favor the prosecution; limit the Penal exposure of each witness; and protect J.D. Fields, who was at the least the son of a generous landlord who rented to the parolees, David Friese, Lavonne Hampshire, Steven Schutt, Robert Sayre, and as to Sarah Terry and Bonnie Fields, a lover and son, (See R.T. pp. 9-28).

The review of their testimony below establishes their bias/false and misleading testimony in favor of the prosectuor; the great extent as to which all were impeached on crucial and basic factual issues; and the fact that as many or more people depicted Land as carrying a knife, as attributed knife to petitioner. Furthermore, none of the wildly varied statements of "planning" attributed to petitioner were taken as such by the jury, which did not agree there was a first degree murder. Thus, deference to the jury can only go so far in sustaining this verdict. In fact, the only rational inference from the whole record is that it cannot be clearly ascertained with any certainty what was said, and what occurred before, after, and during the killing. Therefore, there was no solid evidence petitioner committed any homicide which could not be legally justified or excused.

In the instant case, petitioner's defense attorney, Sandra Resnick, received a copy of the interviews and statements report prior to trial during the discovery process. For reasons unknown to petitioner, defense counsel never introduced these statement reports into evidence or utilized the findings therein in any manner. See Affidavits, Interviews, and Letters from attorney Sandra Resnick "Discover", attached hereto as EXHIBITS. "N"

At petitioner's trial, the prosecutor, Deputy District Attorney Danial G. Lawborn, was well aware of the reports, letters, and interviews conducted during the investigation. In fact, the prosecutor had in his possession a copy of "all the reports indicating the absence of anyone seeing the 'fight'" between petitioner and Land, but chose to knowingly use the false and misleading testimony. After all, it was the prosecution who gave a copy of the discovery report to defense counsel during discovery prior to trial. However, neither the trial court nor the jury was ever made aware of this evidence nor the results contained therein. It seems that for some reason, both the prosecutor and defense counsel "chose" not to reveal the contents of these reports at petitioner's trial.

Instead, the prosecution chose to knowingly use the false and misleading testimony of these witnesses to obtain a criminal conviction in this case. At trial, Sarah Terry, David Friese, and others were called as witnesses for the prosecution and so-called qualified as eye witnesses to the events in this investigation. During direct examination, by prosecutor Daniel G. Lamborn, the following testimony was elicited from witness Ms. Sarah Terry:

See Reporter's Transcript page 142, attached herto as EXIBIT "O."
Prior to eliciting the above false and misleading testimony, the prosecutor actually solicited the following perjury from witness Ms. Terry, knowing the testimony to be false:

Question: "How light is it outside when you're looking?"
Answer: "It was pretty bright, almost a full moon."
Question: "Almost a full moon. Was there any lighting around the trailers, as you recall?"
Answer: "My trailer was totally dark and Bonnie's trailer, she has a bright light on the outside of the battery room that was on."
Question: "The combination of that light, were you able to see what went on next?"
Answer: "Yes, fairly clearly."
—To be continued