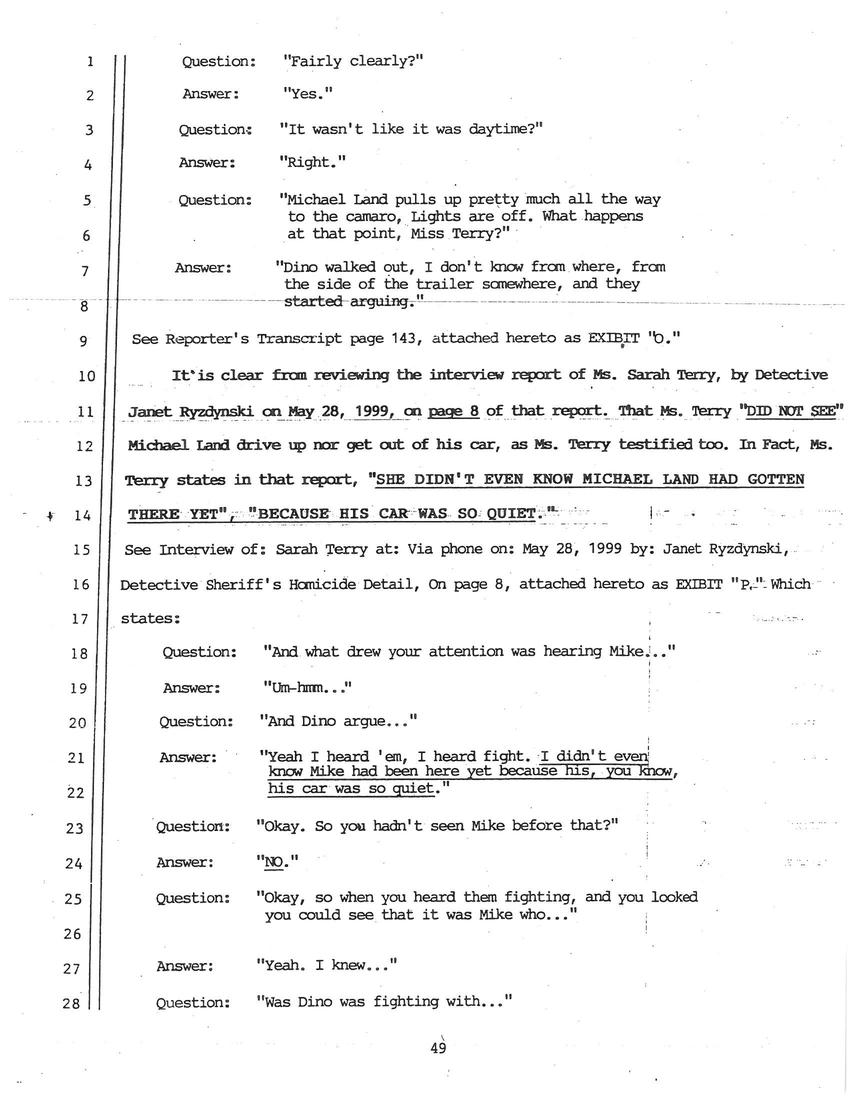 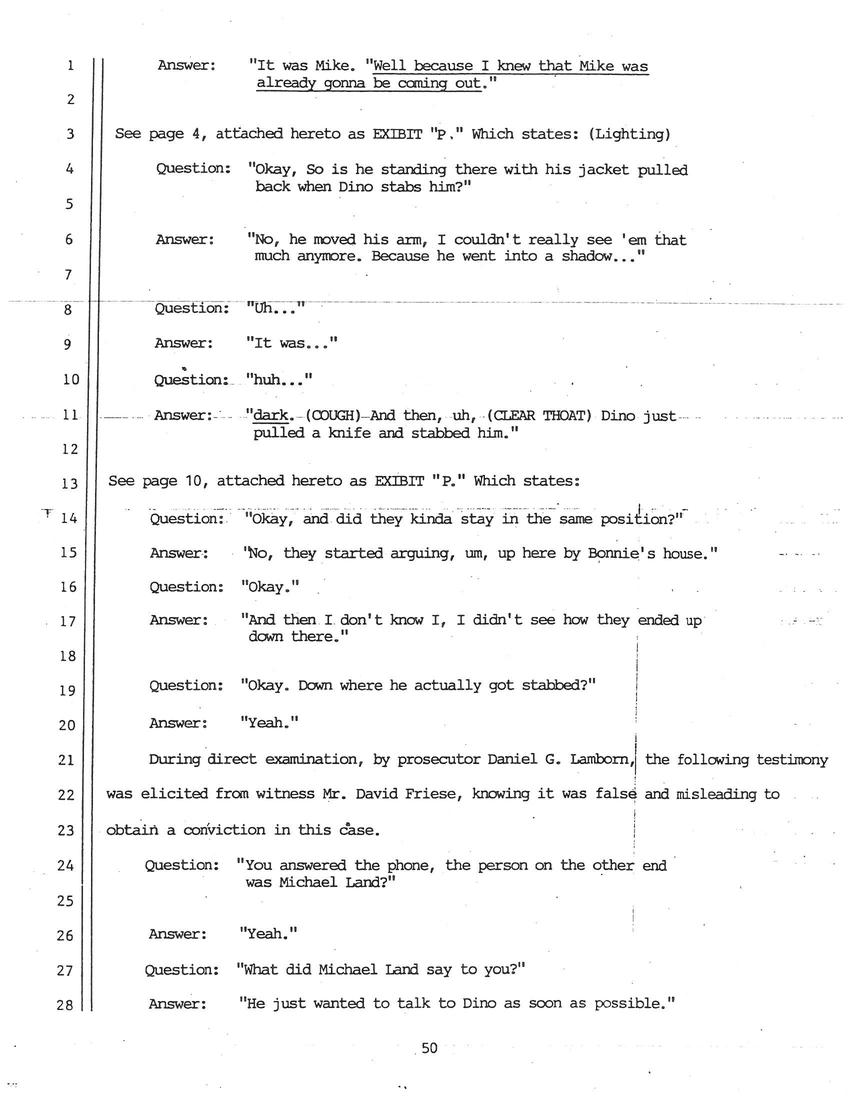 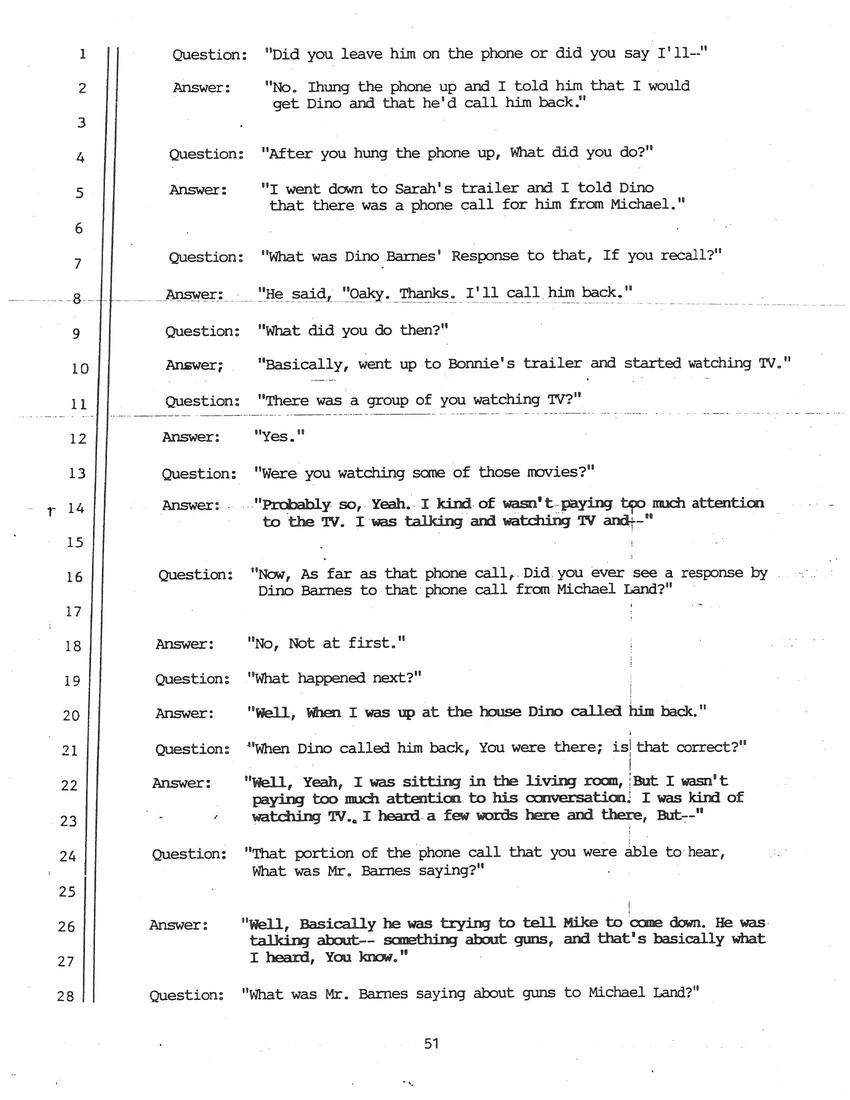 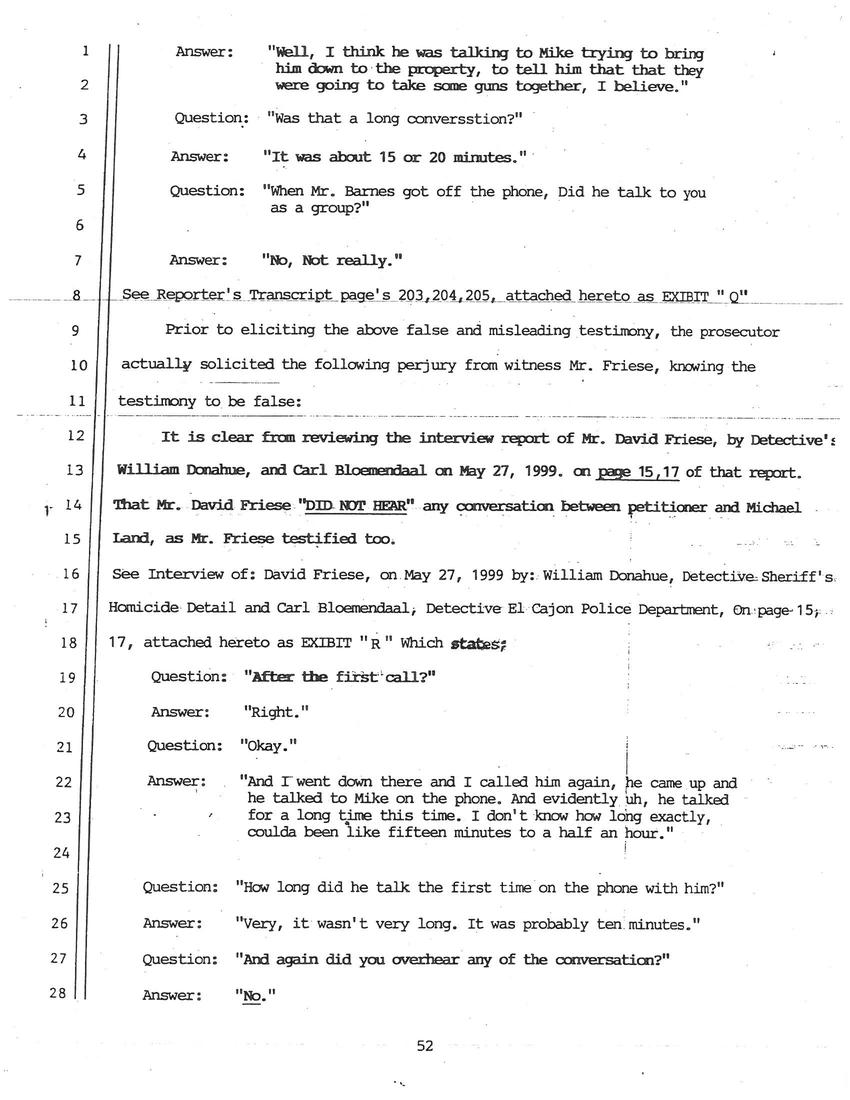 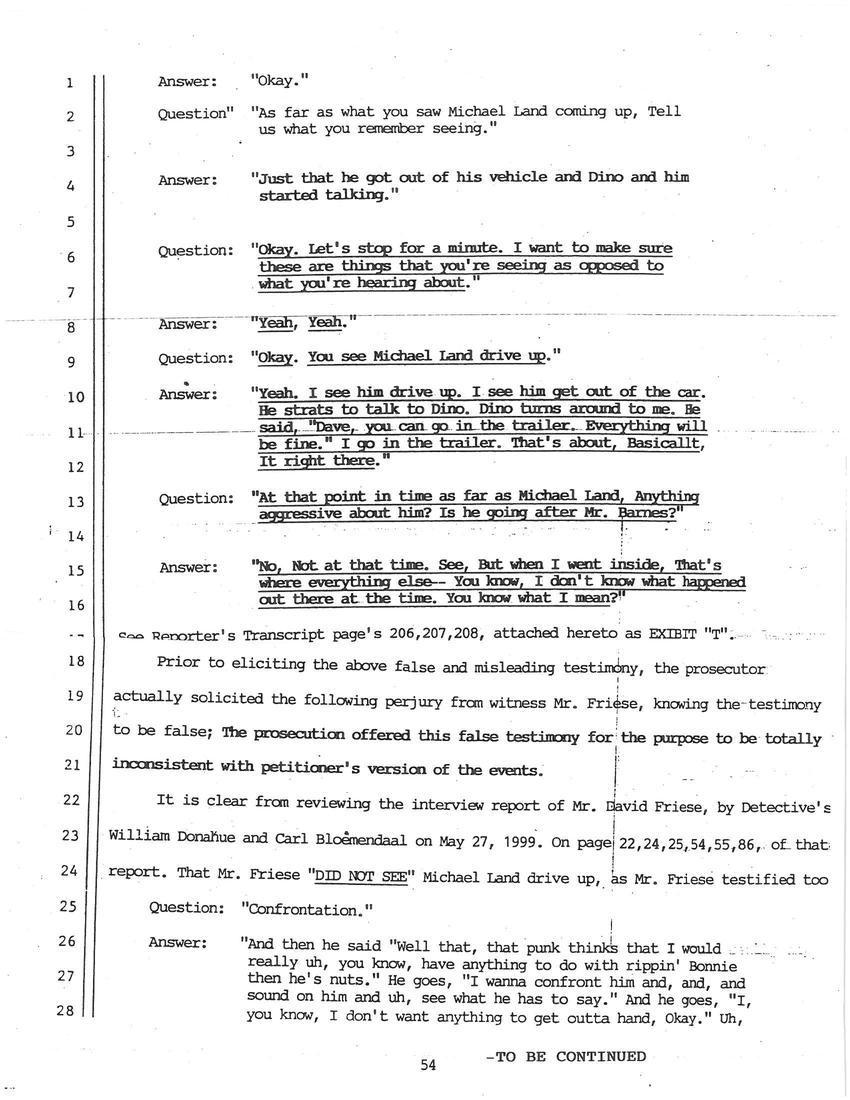 Question: "Fairly clearly?"
Answer: "Yes."
Question: "It wasn't like it was daytime?"
Answer: "Right."
Question: "Michael Land pulls up pretty much all the way to the camaro, lights are off. What happens at that point, Miss Terry?"
Answer: "Dino walked out, I don't know from where, from the side of the trailer somewhere, and they started arguing."

See Reporter's Transcript page 143, attached hereto as EXHIBIT "O".
It is clear from reviewing the interview report of Ms. Sarah Terry, by Detective Janet Ryzdynski on May 28, 1999, on page 8 of that report. That Ms. Terry "did not see" Michael Land drive up nor get out of his car, as Ms. Terry testified to. In fact, Ms. Terry states in the report, "SHE DIDN'T EVEN KNOW MICHAEL LAND HAD GOTTEN THERE YET BECAUSE HIS CAR WAS SO QUIET."
See Interview of Sarah Terry at: Via phone on: May 28, 1999 by Janet Ryzdynski, Detective Sheriff's Homicide Detail, on page 8, attached hereto as EXHIBIT "P", which states:

During direct examination, by prosecutor Daniel G. Lawborn, the following testimony was elicited from witness Mr. David Friese, knowing it was false and misleading to obtain a conviction in this case.

Prior to eliciting the above false and misleading testimony, the prosecutor actually solicited the following perjury from witness Mr. Friese, knowing the testimony to be false:

It is clear from reviewing the interview report of Mr. David Friese, by Detective William Donahue and Carl Bloemendaal on May 27, 1999 on page 15,17, of that report that Mr. David Friese "did not hear" any conversation between petitioner and Michael Land, as Mr. Friese testified to.

Question: "After the first call?"
Answer: "Right."
Question: "Okay."
Answer: "And I went down there and I called him again. He came up and he talked to Mike on the phone. And evidently, uh, he talked for a long time this time. I don't know how long exactly, coulda been like fifteen minutes to a half an hour."
Question: "How long did he talk the first time on the phone with him?"
Answer: "Very, it wasn't very long. It was probably ten minutes."
Question: "And, again, did you overhear any of the conversation?"
Answer: "No."
Question: "Okay."
Question: "As far as what you saw Michael Land coming up, tell us what you remember seeing."
Answer: "Just that he got out of his vehicle, and Dino and him started talking."
Question: "Okay, let's stop for a minute. I want to make sure these are things that you're seeing as opposed to what you're hearing about."
Answer: "Yeah. Yeah."
Question: "Okay. You see Michael Land drive up."
Answer: "Yeah. I see him drive up. I see him get out of the car. He starts to talk to Dino. Dino turns around to me. He said, 'Dave, you can go in the trailer. Everything will be fine.' I go in the trailer. That's about, basically, it right there."
Question: "At that point in time as far as Michael Land, anything aggressive about him? Is he going after Mr. Barnes?"
Answer: "No, not at that time. See, but when I went inside, that's where everything else—you know, I don't know what happened out there at the time. You know what I mean?"

Prior to eliciting the above false and misleading testimony, the prosecutor actually solicited the following perjury from witness Mr. Friese, knowing the testimony to be false. The prosecution offered this false testimony for the purpose to be totally inconsistent with petitioner's version of events.

Question: "Confrontation."
Answer: "And then he said, 'Well, that, that punk thinks I would really, uh, you know, have anything to do with rippin' Bonnie then he's nuts.' He goes, 'I wanna confront him and, uh, and sound on him, and, uh, see what he has to say.' He goes, 'I, you know, I don't want anything to get outta hand, okay.' Uh,"