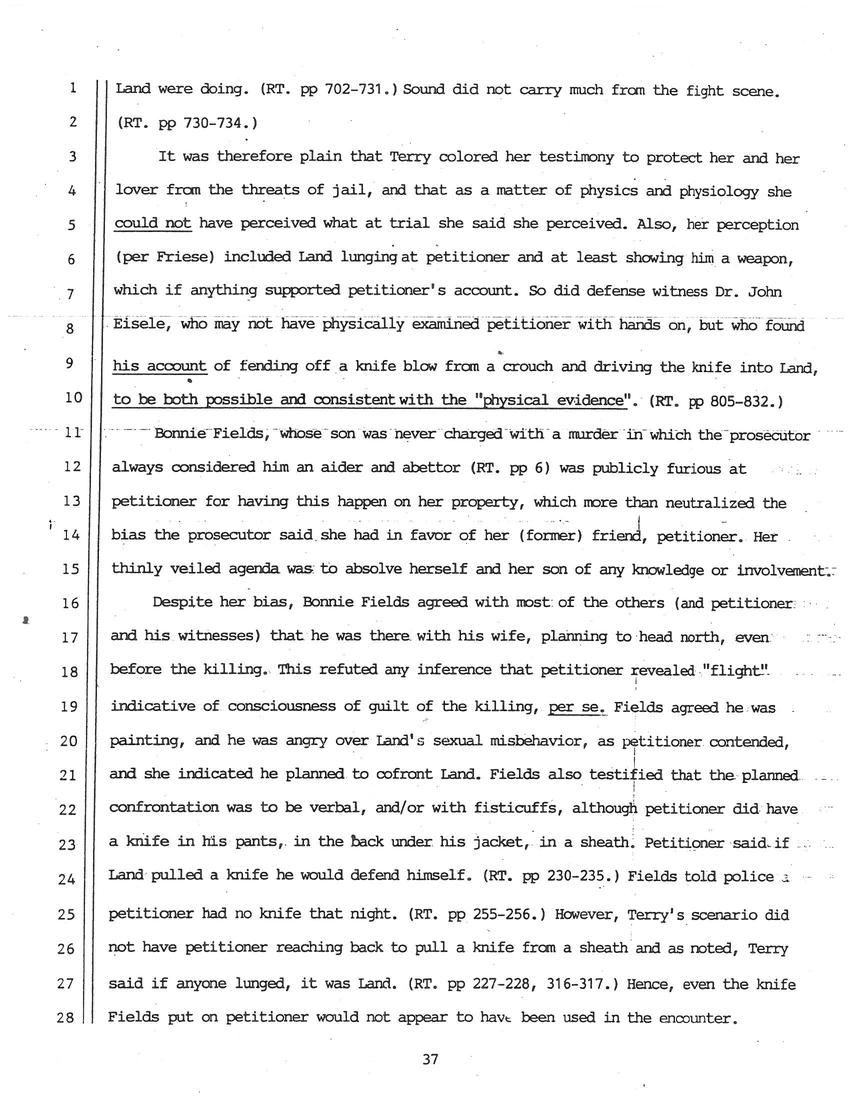 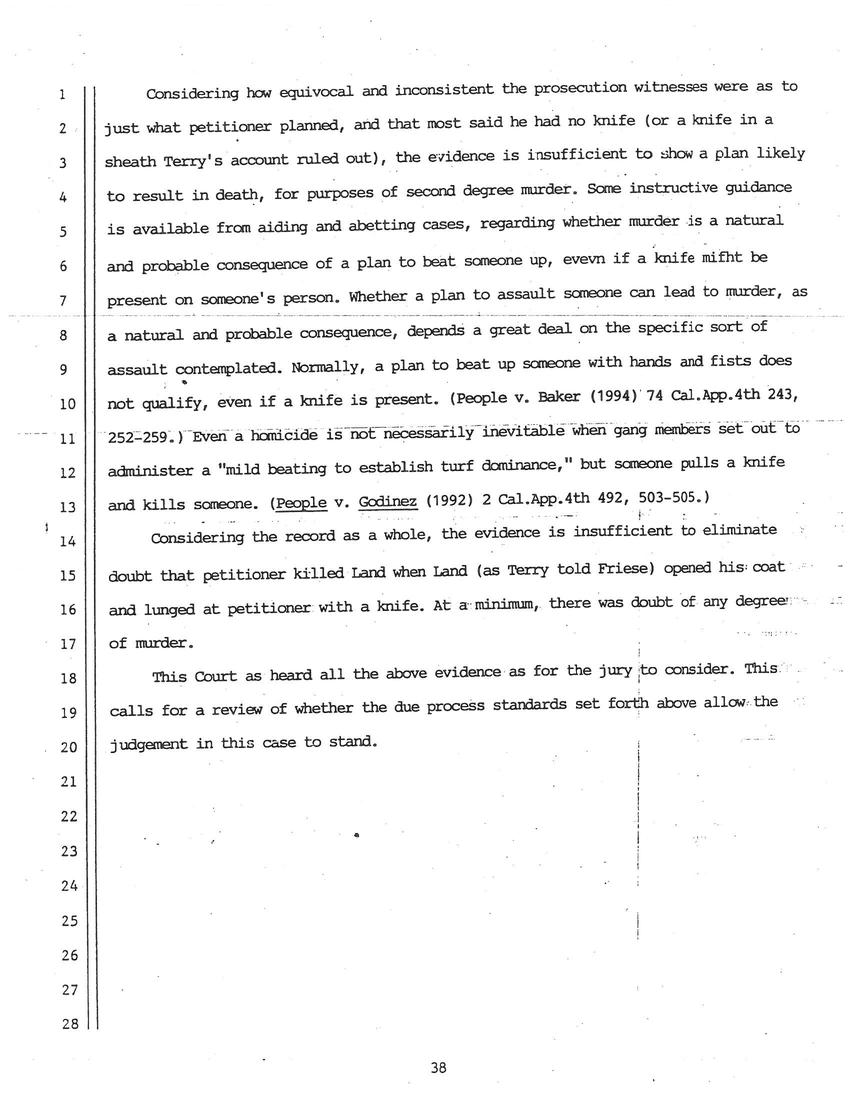 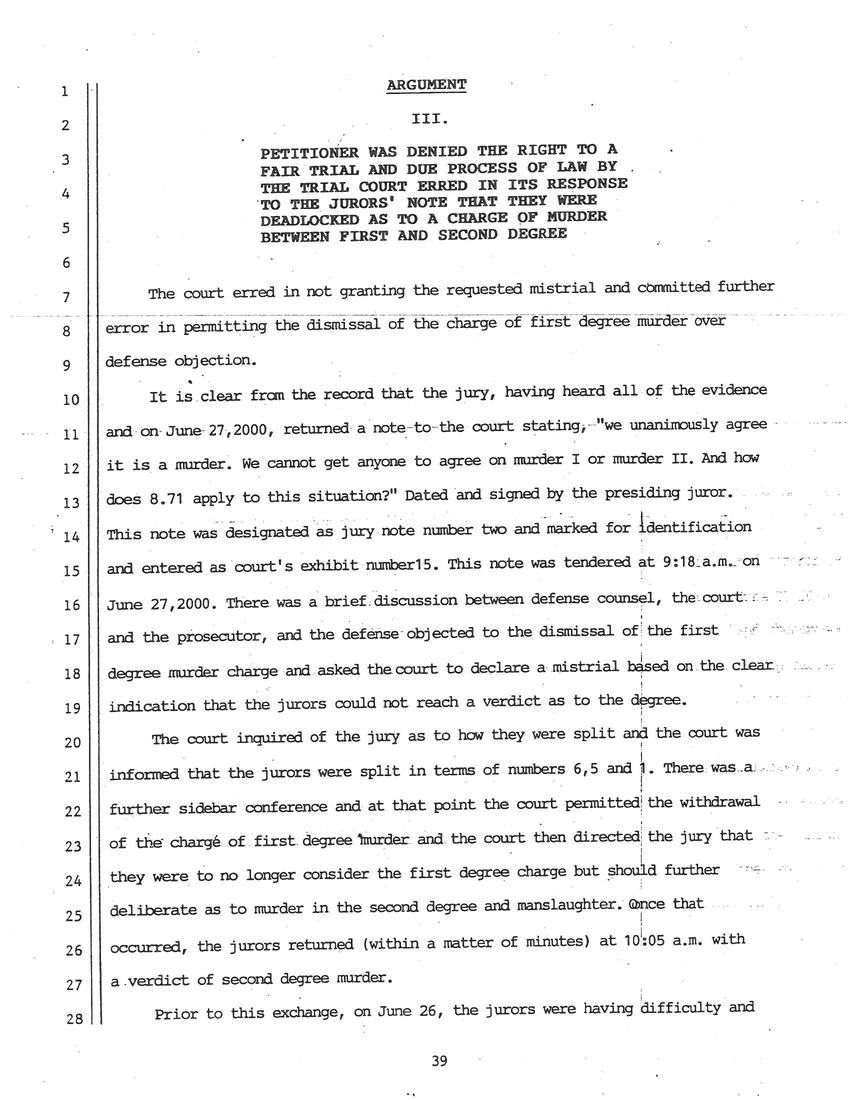 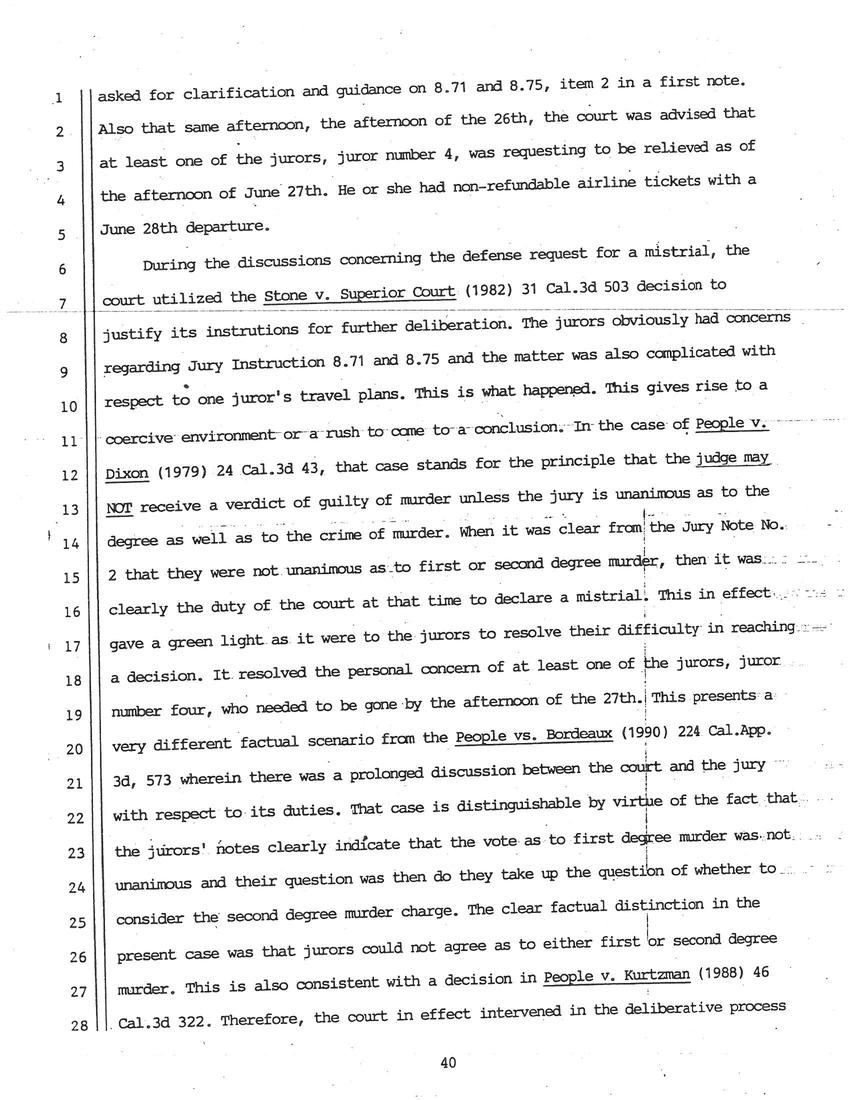 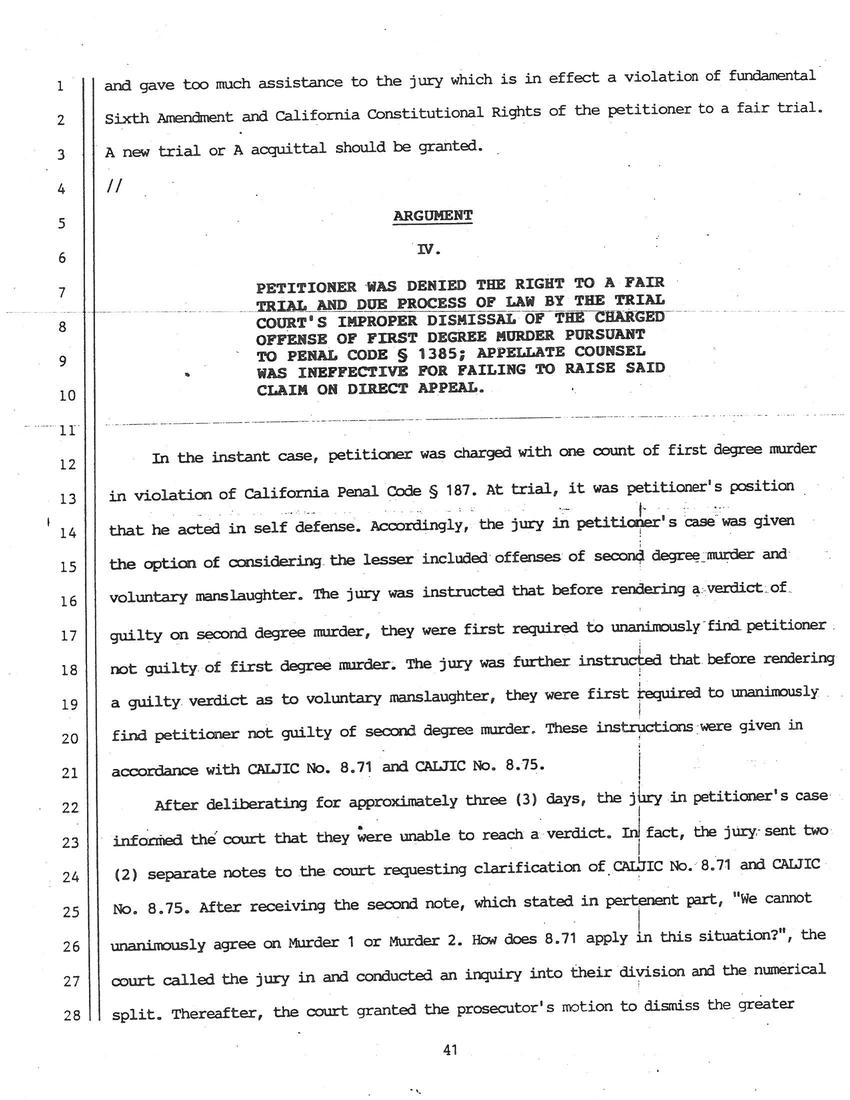 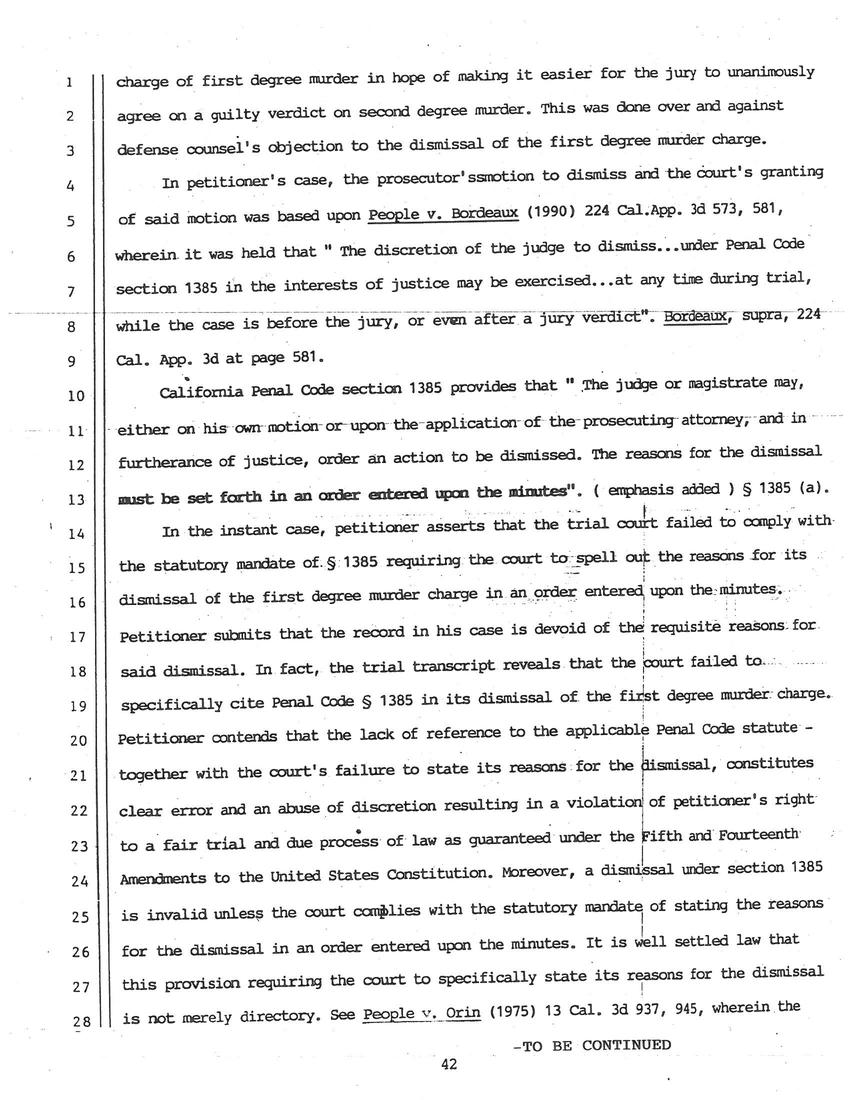 It was therefore plain that Terry colored her testimony to protect her and her lover from the threats of jail, and that as a matter of physics and physiology she could not have perceived what at trial she said she perceived. Also, her perception (per Friese) included Land lunging at petitioner and at least showing him a weapon, which if anything supported petitioner's account. So did defense witness Dr. John Eisele, who may not have physically examined petitioner with hands on, but who found his account of fending off a knife blow from a crouch and driving knife into Land, to be both possible and consistent with the "physical evidence." (RT. pp 805-832.)

Bonnie Fields, whose son was never charged with a murder in which the prosecutor always considered him an aider and abettor (RT. pp 6) was publicly furious at petitioner for having this happen on her property, which more than neutralized the bias the prosecutor said she had in favor of her (former) friend, petitioner. Her thinly veiled agenda was to absolve herself and her son of any knowledge or involvement.

Despite her bias, Bonnie Fields agreed with most of the others (and petitioner and his witnesses) that he was there with his wife, planning to head north, even before the killing. This refuted any inference that petitioner revealed "flight" indicative of consciousness of guilt of the killing, per se. Fields agreed he was painting, and he was angry over Land's sexual misbehavior, as petitioner contended, and she indicated he planned to confront Land. Fields also testified that the planned confrontation was to be verbal, and/or with fisticuffs, although petitioner did have a knife in his pants, in the back under his jacket, in a sheath. Petitioner said if Land pulled a knife he would defend himself. (RT. pp 230-235.) Fields told police petitioner had no knife that night. (RT. pp 255-256.) However, Terry's scenario did not have petitioner reaching back to pull a knife from a sheath and as noted, Terry said if anyone lunged, it was Land. (RT. pp 227-228, 316-317.) Hence, even the knife Fields put on petitioner would not appear to have been used in the encounter.

Considering how equivocal and inconsistent the prosecution witnesses were as to just what petitioner planned, and that most said he had no knife (or a knife in a sheath Terry's account ruled out), the evidence is insufficient to show a plan likely to result in death, for purposes of second degree murder. Some instructive guidance is available from aiding and abetting cases, regarding whether murder is a natural and probable consequence of a plan to beat someone up, even if a knife might be present on someone's person. Whether a plan to assault someone can lead to murder, as a natural and probable consequence, depends a great deal on the specific sort of assault contemplated. Normally, a plan to beat up someone with hands and fists does not qualify, even if a knife is present. (People v. Baker (1994) 74 Cal.App.4th 243, 252-259.) Even a homicide is not necessarily inevitable when gang members set out to administer a "mild beating to establish turf dominance," but someone pulls a knife and kills someone. (People v. Godinez (1992) 492, 503-505.)

Considering the record as a whole, the evidence is insufficient to eliminate doubt that petitioner killed Land when Land (as Terry told Friese) opened his coat and lunged at petitioner with a knife. At a minimum, there was doubt of any degree of murder.

This court has heard all the above evidence as for the jury to consider. This calls for a review of whether the due process standards set forth above allow the judgment in this case to stand.

ARGUMENT
III.
PETITIONER WAS DENIED THE RIGHT TO A FAIR TRIAL AND DUE PROCESS OF LAW BY THE TRIAL COURT ERRED IN ITS RESPONSE TO THE JURORS' NOTE THAT THEY WERE DEADLOCKED AS TO A CHARGE OF MURDER BETWEEN FIRST AND SECOND DEGREE

The court erred in not granting the requested mistrial and committed further error in permitting the dismissal of the charge of first degree murder over defense objection.

It is clear from the record that the jury, having heard all of the evidence and on June 27, 2000, returned a note to the court stating, "We unanimously agree it is a murder. We cannot get anyone to agree on murder I or murder II. And how does 8.71 apply to this situation?" Dated and signed by the presiding juror. This note was designated as jury note number two and marked for identification and entered as court's exhibit number15. This note was tendered at 9:18 a.m. on the prosecutor, and the defense objected to the dismissal of the first degree murder charge and asked the court to declare a mistrial based on the clear indication that the jurors could not reach a verdict as to the degree.

The court inquired of the jury as to how they were split and the court was informed that the jurors were split in terms of numbers 6,5 and 1. There was a further sidebar conference and at that point the court permitted the withdrawal of the charge of first degree murder and the court then directed the jury that they were to no longer consider the first degree charge but should further deliberate as to murder in the second degree and manslaughter. Once that occurred, the jurors returned (within a matter of minutes) at 10:05 a.m. with a verdict of second degree murder.

Prior to this exchange, on June 26, the jurors were having difficulty and asked for clarification and guidance on 8.71 and 8.75, item 2 in a first note. Also that same afternoon, the afternoon of the 26th, the court was advised that at least one of the jurors, juror number 4, was requesting to be relieved as of the afternoon of June 27th. He or she had non-refundable airline tickets with a June 28th departure.

During the discussions concerning the defense request for a mistrial, the court utilized the Stone v. Superior Court (1982) 31 Cal.3d 503 decision to justify its instructions for further deliberation. The jurors obviously had concerns regarding Jury Instruction 8.71 and 8.75 and the matter was also complicated with respect to one juror's travel plans. This is what happened. This gives rise to a coercive environment or a rush to come to a conclusion. In the case of People v. Dixon (1979) 24 Cal.3d 43, that case stands for the principle that the jury may NOT receive a verdict of guilty of murder unless the jury is unanimous as to the degree as well as to the crime of murder. When it was clear from the Jury Note No. 2 that they were not unanimous as to first or second degree murder, then it was clearly the duty of the court at that time to declare a mistrial. This in effect gave a green light as it were to the judge to resolve their difficulty in reaching a decision. It resolved the personal concern of at least one of the jurors, juror number four, who needed to be gone by the afternoon of the 27th. This presents a very different factual scenario from the People vs. Bordeaux (1990) 224 Cal.App.3d, 573 wherein there was a prolonged discussion between the court and the jury with respect to its duties. That case is distinguishable by virtue of the fact that the jurors' notes clearly indicate that the vote as to first degree murder was not unanimous and their question was when then do they take up the question of whether to consider the second degree murder charge. The clear factual distinction in the present case was that jurors could not agree as to either first or second degree murder. This is also consistent with a decision in People v. Kurtzman (1988) 46 Cal.3d 322. Therefore, the court in effect intervened in the deliberate process and gave too much assistance to the jury which is in effect a violation of fundamental Sixth Amendment and California Constitutional Rights of the petitioner to a fair trial. A new trial or an acquittal should be granted.
//

ARGUMENT
IV.
PETITIONER WAS DENIED THE RIGHT TO A FAIR TRIAL AND DUE PROCESS OF LAW BY THE TRIAL COURT'S IMPROPER DISMISSAL OF THE CHARGED OFFENSE OF FIRST DEGREE MURDER PURSUANT TO PENAL CODE § 1385; APPELLATE COUNSEL WAS INEFFECTIVE FOR FAILING TO RAISE SAID CLAIM ON DIRECT APPEAL.

After deliberating for approximately three (3) days, the jury in petitioner's case informed the court that they were unable to reach a verdict. In fact, the jury sent two (2) separate notes to the court requesting clarification of CAlJIC No. 8.71 and CALJIC No. 8.75. After receiving the second note, which stated in pertinent part, "We cannot unanimously agree on Murder 1 or Murder 2. How does 8.71 apply in this situation?", the court called the jury in and conducted an inquiry into their division and the numerical split. Thereafter, the court granted the prosecutor's motion to dismiss the greater charge of first degree murder in hope of making it easier for the jury to unanimously agree on a guilty verdict on second degree murder. This was done over and against defense counsel's objection to the dismissal of first degree murder charge.

In petitioner's case, the prosecutor's motion to dismiss and the court's granting of said motion was based upon People v. Bordeaux (1990) 224 Cal.App. 3d 573, 581, wherein it was held that "The discretion of the judge to dismiss... under Penal Code section 1385 in the interests of justice may be exercised... at any time during trial, while the case is before the jury, or even after a jury verdict." Bordeaux, supra, 224 Cal.App. 3d at page 581.

California Penal Code section 1385 provides that, "The judge or magistrate may, either on his own motion or upon the application of the prosecuting attorney, and in the furtherance of justice, order an action to be dismissed. The reasons for the dismissal must be set forth in an order entered upon the minutes." (emphasis added) § 1385(a).

In the instant case, petitioner asserts that the trial court failed to comply with the statutory mandate of § 1385 requiring the court to spell out the reasons for its dismissal of the first degree murder charge in an order entered upon the minutes. Petitioner submits that the record in his case is devoid of the requisite reasons for said dismissal. In fact, the trial transcript reveals that the court failed to specifically cite Penal Code § 1385 in its dismissal of the first degree murder charge. Petitioner contends that the lack of reference to the applicable Penal Code statute—together with the court's failure to state its reasons for the dismissal—constitutes clear error and an abuse of discretion resulting in a violation of a petitioner's right to a fair trial and due process of law as guaranteed under the Fifth and Fourteenth Amendments of the United States Constitution. Moreover, a dismissal under section 1385 is invalid unless the court complies with the statutory mandate of stating the reasons for the dismissal in an order entered upon the minutes. It is well settled law that this provision requiring the court to specifically state its reasons for the dismissal is not merely directory. See People v. Orin (1975) 13 Cal. 3d 937, 945, wherein the
—To be continued