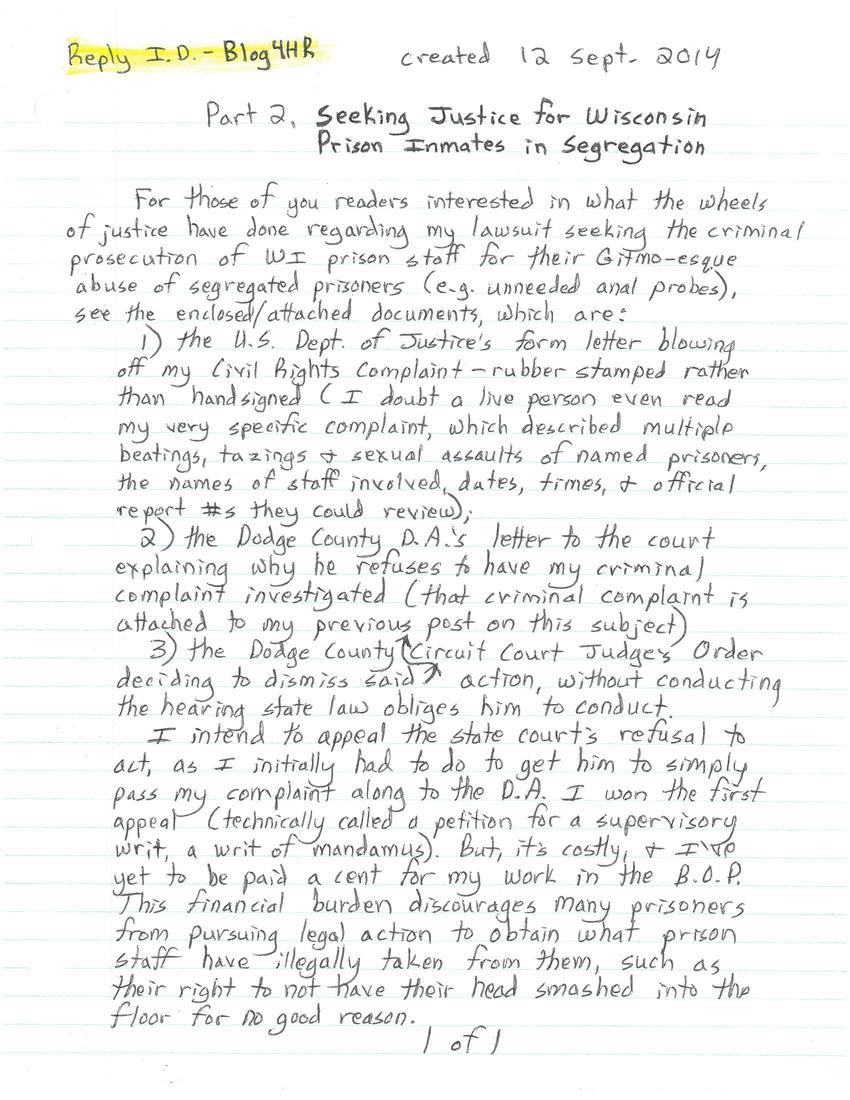 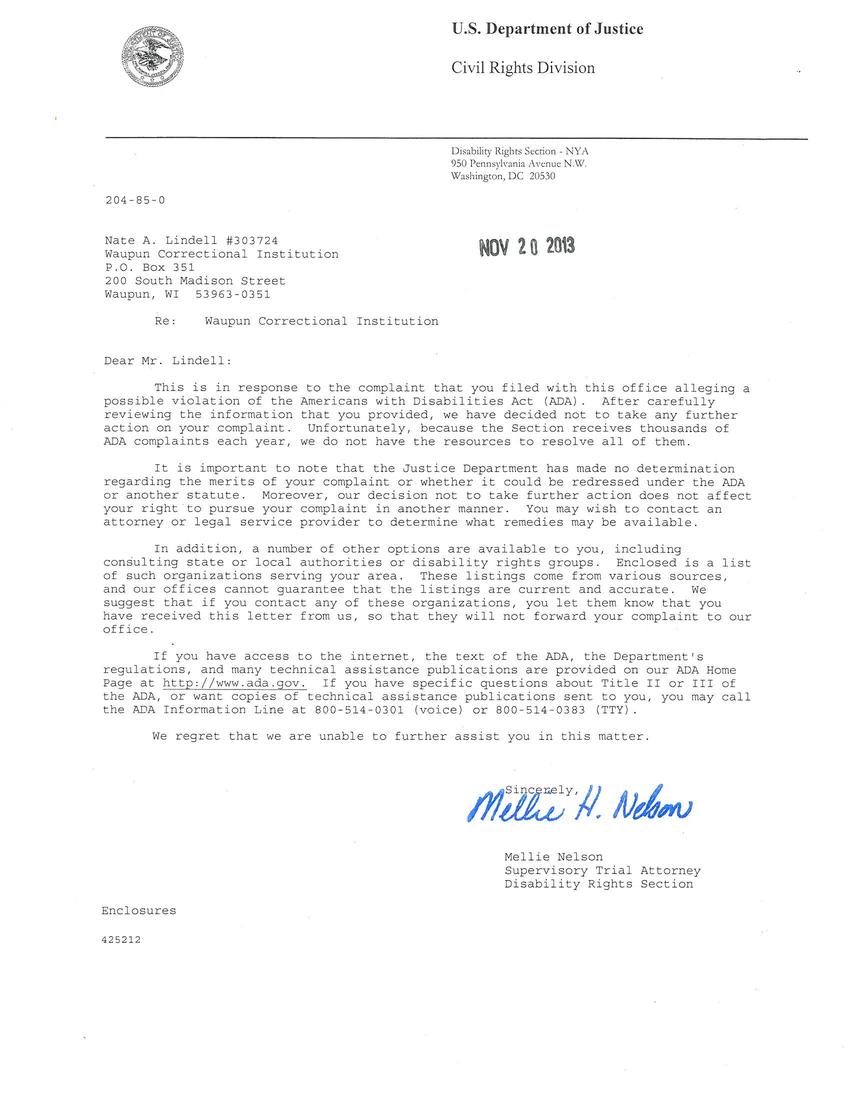 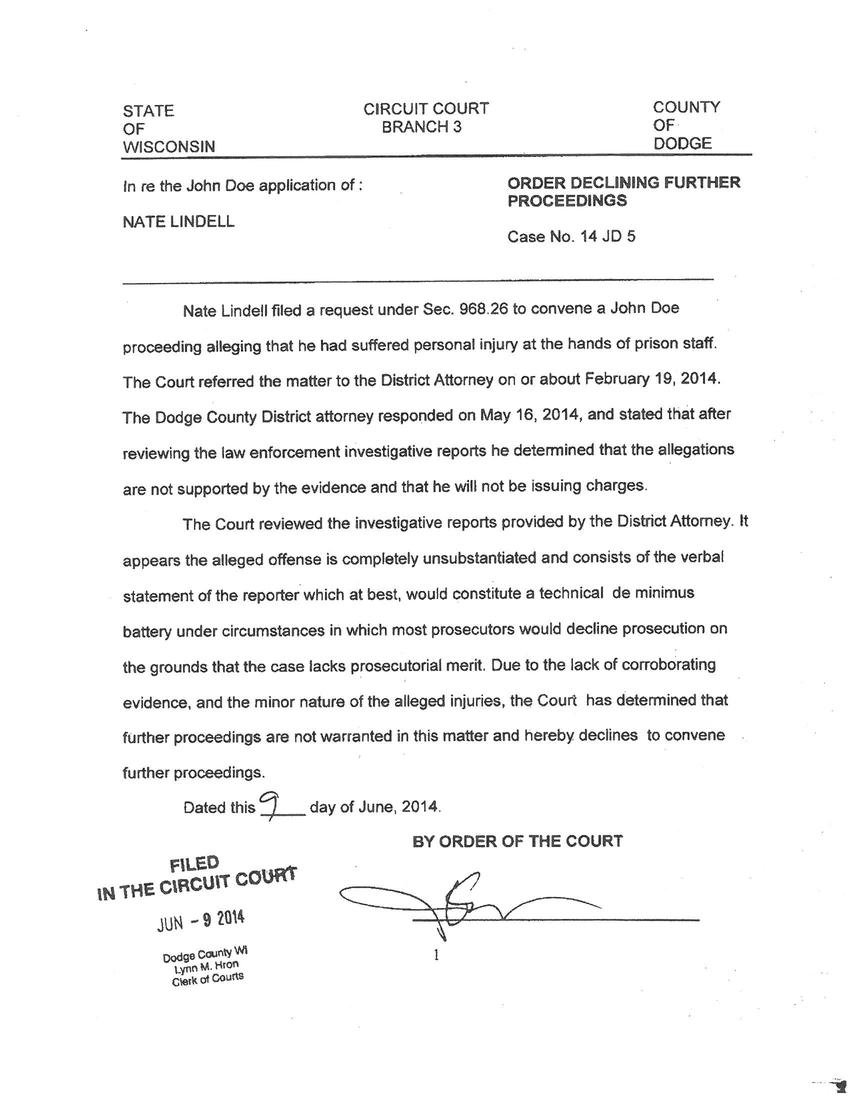 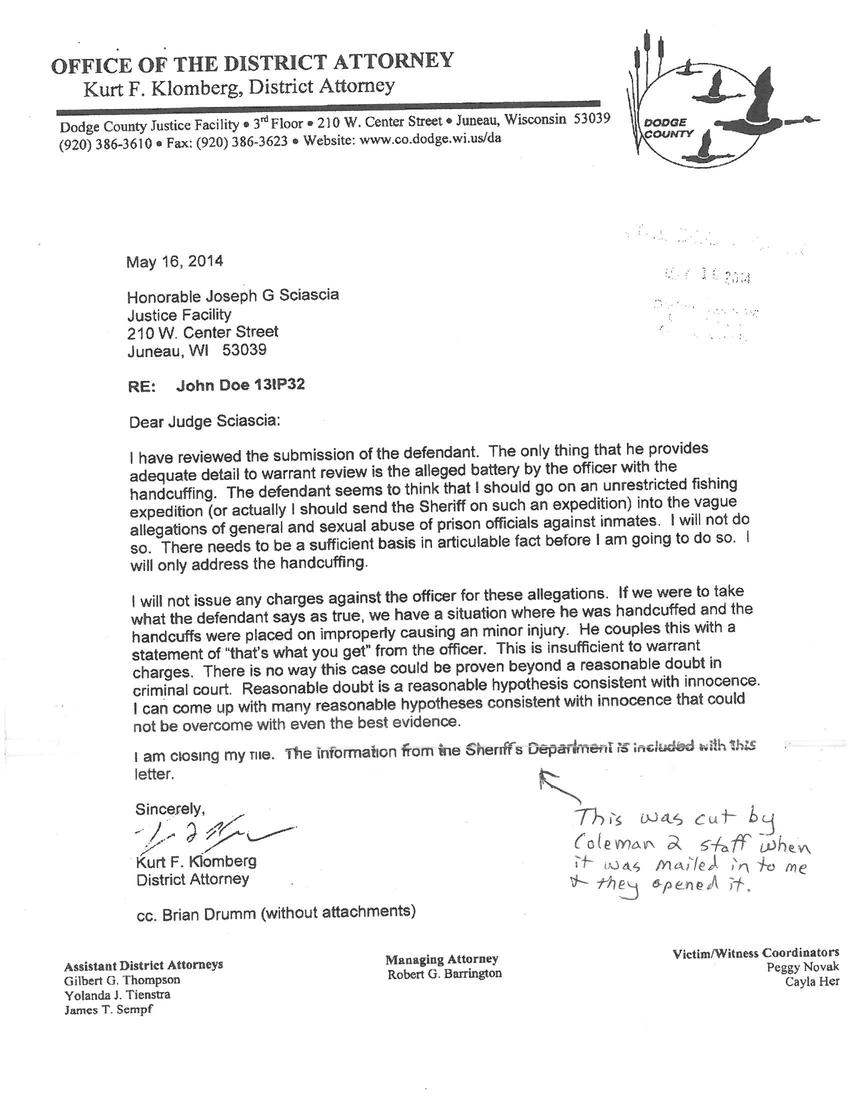 1) The U.S. Dept. of Justice's form letter blowing off my civil rights complaint - rubber stamped rater than hand signed (I doubt a live person even read my very specific complaint, which describes multiple beatings, tazings and sexual assaults of named prisoners, the names of staff involved, dates, times and official report #'s they could review);

I intend to appeal the state court's refusal to act, as I initially had to do to get him to simply pass my complaint along to the D.A. I won the first appeal (technically called a petition for a supervisory writ, a writ of mandamus). But, it's costly, and I've yet to be paid a cent for my work in the B.O.P. This financial burden discourages many prisoner from pursuing legal action to obtain what prison staff have illegally taken from them, such as their right to not have their head smashed into the floor for no good reason.

This is in response to the complaint that you filed with this office alleging a possible violation of the Americans with Disabilities Act (ADA). After carefully reviewing the information that you provided, we have decided not to take any further action on your complaint. Unfortunately, because the Section receives thousands of ADA complaints each year, we do not have the resources to resolve all of them.

It is important to not that the Department has made no determination regarding the merits of your complaint or whether it could be redressed under the ADA or another statute. Moreover, our decision not to take further action does not affect your right to pursue your complaint in another manner. You may wish to contact an attorney or legal service provider to determine what remedies may be available.

In addition, a number of other options are available to you consulting state or local authorities or disability rights groups. Enclosed is a list of such organizations serving your area. These listings come from various sources, and our offices cannot guarantee that the listings are current and accurate. We suggest that if you contact any of the organizations, you let them know that you have received this letter from us, so that they will not forward your complaint to our office.

If you have access to the internet, the text of the ADA, the Department's regulations, and many technical assistance publications are provided on our ADA Home Page at http://www.ada.gov. If you have specific questions about Title II or Title III of the ADA, or want copies of technical assistance publications sent to you, you may call the ADA Information Line at 800-514-0301 (voice) or 800-514-0383 (TTV).

We regret that we are unable to further assist you in this matter.

In re the John Doe application of:
NATE LINDELL

Nate Lindell filed a request under Sect. 968.26 to convene a John Doe proceeding alleging that he has suffered personal injury at the hand of prison staff. The Court referred the matter to the District Attorney on or about February 19, 2014. The Dodge County District attorney responded on May 16, 2014, and stated that after reviewing the law enforcement investigative reports he determined that the allegations are not supported by the evidence and that he will not be issuing charges.

The Court reviewed the investigative reports provided by the District Attorney. It appears the alleged offense is completely unsubstantiated and consists of the verbal statement of the reporter which at best, would constitute a technical de minimus battery under the circumstances in which most prosecutors would decline prosecution on the grounds that the case lacks prosecutorial merit. Due to the lack of corroborating evidence, and the minor nature of the alleged injuries, the Court has determined that further proceedings are not warranted in this matter and hereby declines to convene further proceedings.

BY ORDER OF THE COURT

FLED IN THE CIRCUIT COURT

I have reviewed the submission of the defendant. The only thing that he provides adequate detail to warrant review is the alleged battery by the officer with the handcuffing. The defendant seems to think that I should go on an unrestricted fishing expedition (or actually I should send the Sheriff on such as expedition) into the vague allegations of general and sexual abuse of prison officials against inmates. I will not do so. There needs to be a sufficient basis in articulate fact before I am going to do so. I will only address the handcuffing.

I will not issue any charges against the officer for these allegations. If we were to take what the defendant says as true, we have a situation where he was handcuffed and the handcuffs were placed on improperly causing a minor injury. He couples this with a statement of "that's what you get" from the officer. This is insufficient to warrant charges. There is no way this case could be proven beyond a reasonable doubt in criminal court. Reasonable doubt is a reasonable hypothesis consistent with innocence. I can come up with many reasonable hypotheses consistent with innocence that could not be overcome with even the best evidence.

I am closing my file. The information from the Sheriff's Department is included with this letter.

Hmmmm...so he can "come up with many reasonable hypotheses consistent with innocence that could not be overcome with even the best evidence." In other words, he is unwilling to believe this took place, even if there is sufficient evidence that proves that it did. Typical. I know it won't discourage you from doing what's right.