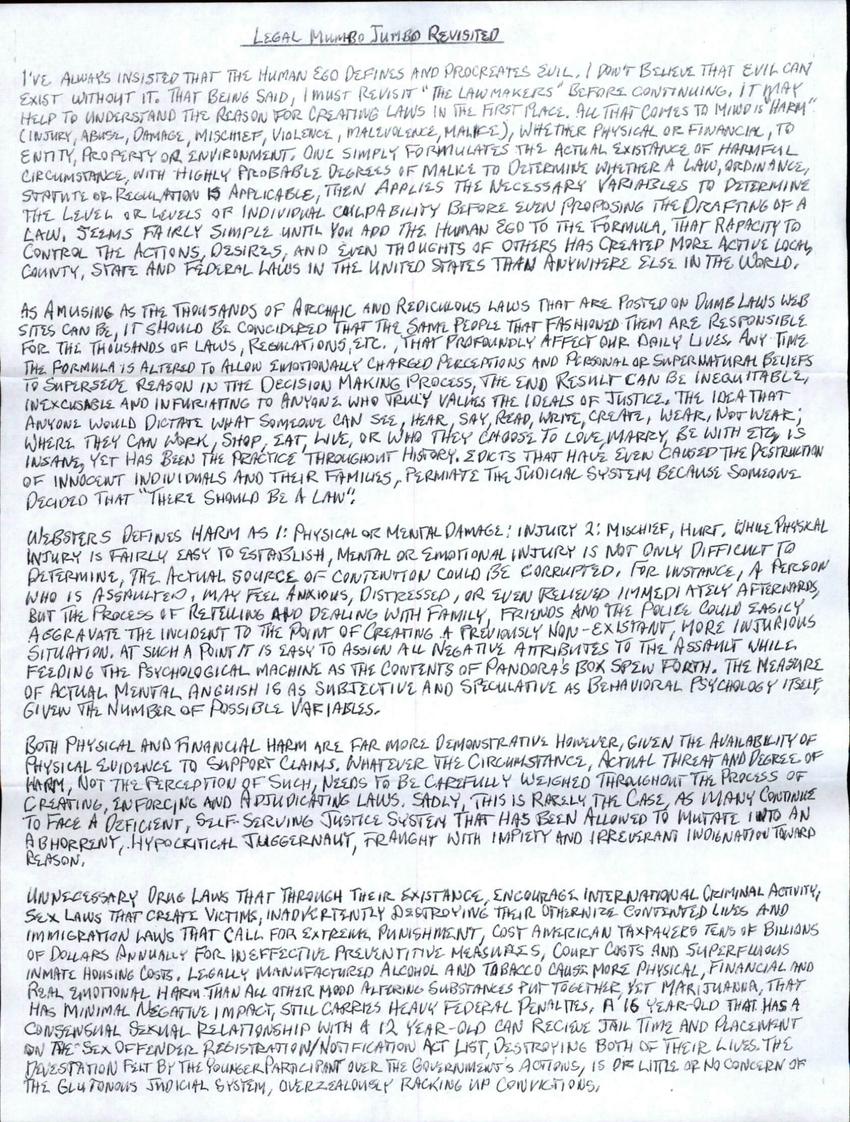 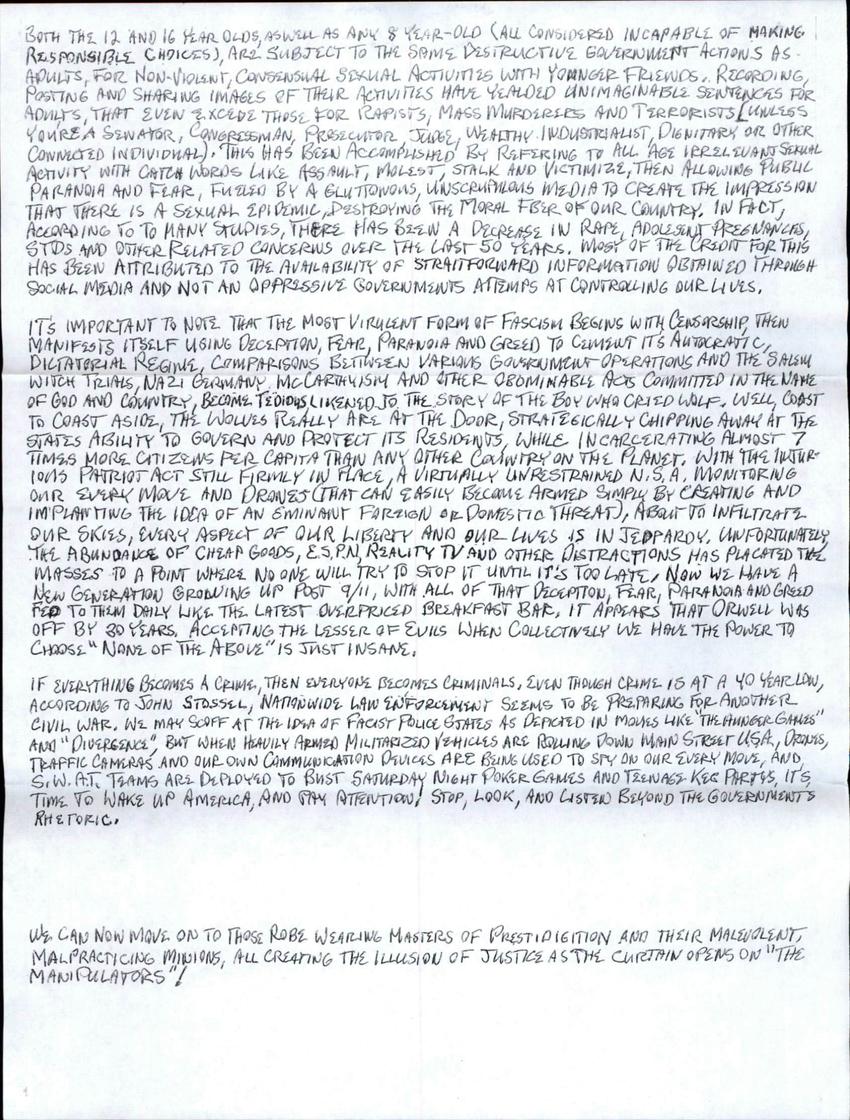 I've always insisted that the human ego defines and procreates evil. I don't believe that evil can exit without it. That being said, I must revisit "The Lawmakers" before continuing, it may help to understand the reason for creating laws in the first place. All that comes to mins is "harm" (injury, abuse, damage, mischief, violence, malevolence, malice), whether physical or financial, to entity, property or environment, one simply formulates the actual existence of harmful circumstance, with highly probable degrees of malice to determine whether a law, ordinance, statute or regulation is applicable, then applies the necessary variables to determine the level or levels of individual culpability before even proposing the drafting of a law, seems fairly simple util you add the human ego to the formula, that rapacity to control the actions, desires and even thoughts of others has created more active local, county, state and federal laws in the United States than anywhere else is the world.

As amusing as the thousands of archaic and ridiculous laws that are posted on dumb laws websites can be, it should be considered that the same people that fashioned them are responsible for the thousands of laws, regulations, etc., that profoundly affect our daily lives, any time the formula is altered to allow emotionally charged perceptions and personal or super natural beliefs to supersede reason in the decision making process, the end result ca be inequitable, inexcusable and infuriating to anyone who truly values the ideals of justice. The idea that anyone would dictate what someone can see, hear, say, read, write, create, wear, not wear; where they can work, shop, eat, live, or who they choose to love, marry, be with, etc, is insane, yet has been the practice throughout history. Edicts that have even caused he destruction of innocent individuals and their families, permiate the judicial system because someone decided that "there should be a law".

Webster's defines harm as 1: Physical or mental damage: injury 2: Mischief, hurt, while physical injury is fairly easy to establish, mental or emotional injury is not only difficult to determine, the actual source of contention could be corrupted, for instance, a person who is assaulted, may feel anxious, distressed, or even relieved immediately afterwards, but the process of retelling and dealing with family, friends and the police could easily aggravate the incident to the point of creating a previously non-existant, more injurious situation At such a point it is easy to assign all negative attributes to the assault while feeding the psychological machine as the contents of Pandora's Box spew forth. The measure of actual mental anguish is as subjective and speculative as behavioral psychology itself, give the number of possible variables.

Both physical and financial harm are far more demonstrative however, given the availability of physical evidence to support claims. whatever the circumstance, actual threat and degree of harm, to the perception of such, needs to be carefully weighed throughout the process of creating, enforcing and adjudicating laws. Sadly, this is rarely the case, as many continue to face a deficient, self-serving justice system that has been allowed to mutate into an abhorrently, hypocritical juggernaut, fraught with impiety and irreverent indignation toward reason.

Unnecessary drug laws that through their existence, encourage international criminal activity, sex laws that create victims, inadvertently destroying their otherwise contented lives and immigration laws that call for extreme punishment, cost American tax payers tens of billions of dollars annually for ineffective preventative measures, court costs and superfluous inmate housing cost. Legally manufactured alcohol and tobacco cause more physical, financial and real emotional harm than all the other mood altering substances put together, yet marijuana, that has minimal negative impact, still carries heavy federal penalties. A 16 year-old that has a consensual sexual relationship with a 12 year-old can receive jail time and placement on the sex offender registration/notification act list, destroying both of their lives. The devastation felt by the younger participant over the governments actions, is of little or no concern of the glutinous judicial system, overzealously racking up convictions, both the 12 and 16 year-old, as well as any 8 year-old (also considered incapable of making responsible choices), are subject to the same destructive government actions as adults, for non-violent, consensual sexual activities with younger friends. Recording, posting and sharing images of their activities have yielded unimaginable sentences for adults, that even exceed those for rapists, mass murderers and terrorists (unless you are a senator, congressman, prosecutor, judge, wealthy industrialist, dignitary or other connected individual). This has been accomplished by referring to all age irrelevant sexual activity with catch worlds like assault, molest, stalk and victimize, then allowing public paranoia and fear, fueled by a gluttonous, unscrupulous media to create the impression that there is a sexual epidemic, destroying the moral fiber of our country. In fact, according to many studies, there has been a decrease in rape, adolescent pregnancies, STD's and other related concerns over the last 50 years. Most of the credit for this has been attributed to the availabiltiy of straight forward information obtained through social media and not an oppressive governments attempt sat controlling our lives.

It's important to note that the most virulent form of fascism begins with censorship, then manifests itself using deception, fear, paranoia and greed to cement its autocratic dictatorial regime, comparisons between various government operations and the Salem Witch Trials, Nazi Germany, McCarthyism and other abominable acts committed in the name of God and country, become tedious likened to the story of the boy who cried wolf. Well, coast to coast aside, the wolves really are at the door, strategically chipping away at the states ability to govern and protect its residents, while incarcerating almost 7 times more citizens per capita than any other country on the planet. With the injurious patriot act still firmly in place, a virtually unrestrained N.S.A. monitoring our every move and drones (that can easily become armed simply by creating and implanting the idea of an eminent foreign or domestic threat), about to infiltrate our skies, every aspect of our liberty and our lives is in jeopardy. Unfortunately, the abundance of cheap goods, ESPN, reality TV and other distractions has placated the masses to a point where no one will try to stop it until it's too late, now we have a new generation growing up post 9/11, with all of that deception, fear, paranoia and greed fed to them daily like the latest overpriced breakfast bar, it appears that Orwell was off by 30 years. Accepting the lesser of evils when collectively we have the power to choose "none of the above" is just insane.

If everything becomes a crime, then everyone becomes criminals, even though crime is at a 40 year low, according to John Stossel, nationwide law enforcement seems to be preparing for another civil war. We may scoff at the idea of fascist police states as depicted in movies like "The Hunger Games" and "Divergence", but when heavily armed militarized vehicles are rolling down main street USA, drones, traffic cameras and our communication devices are being used to spy on our every move, and SWAT teams are deployed to bust our Saturday night poker games and teenage keg parties, its time to wake up America, pay attention, stop, look and listen beyond the governments rhetoric.

We can now move on to the robe wearing masters of prestidigitation and their malevolent, malpracticing minions, all creating the illusion of justice as the curtain opens on "The Manipulators"!

Thanks for writing! I finished the transcription for your post. I am pretty sure that if your 8 year old daughter came home and told you she was pregnant from having sex with a 16 year old you wouldn't be so passe about the situation. Your views on CHILDREN having sex is a bit off! But just like you having an opinion, that is mine!