Fear of Sex and the Boogie Man 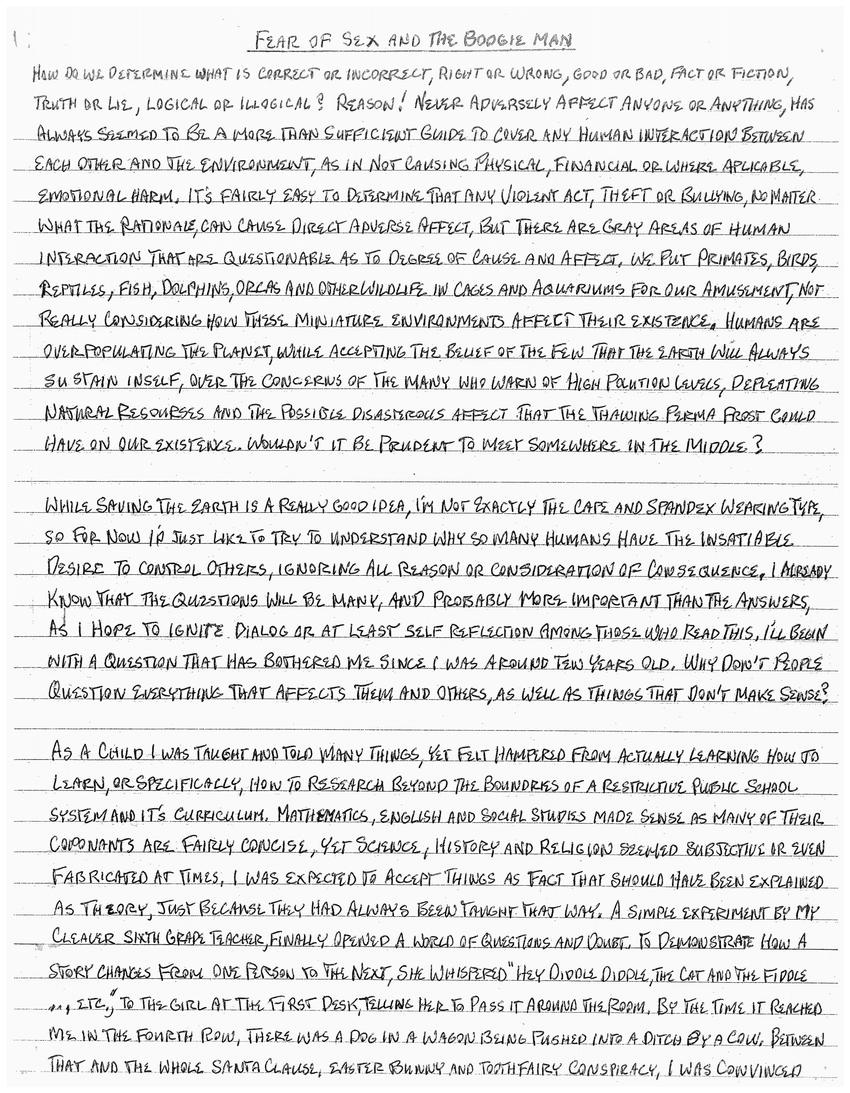 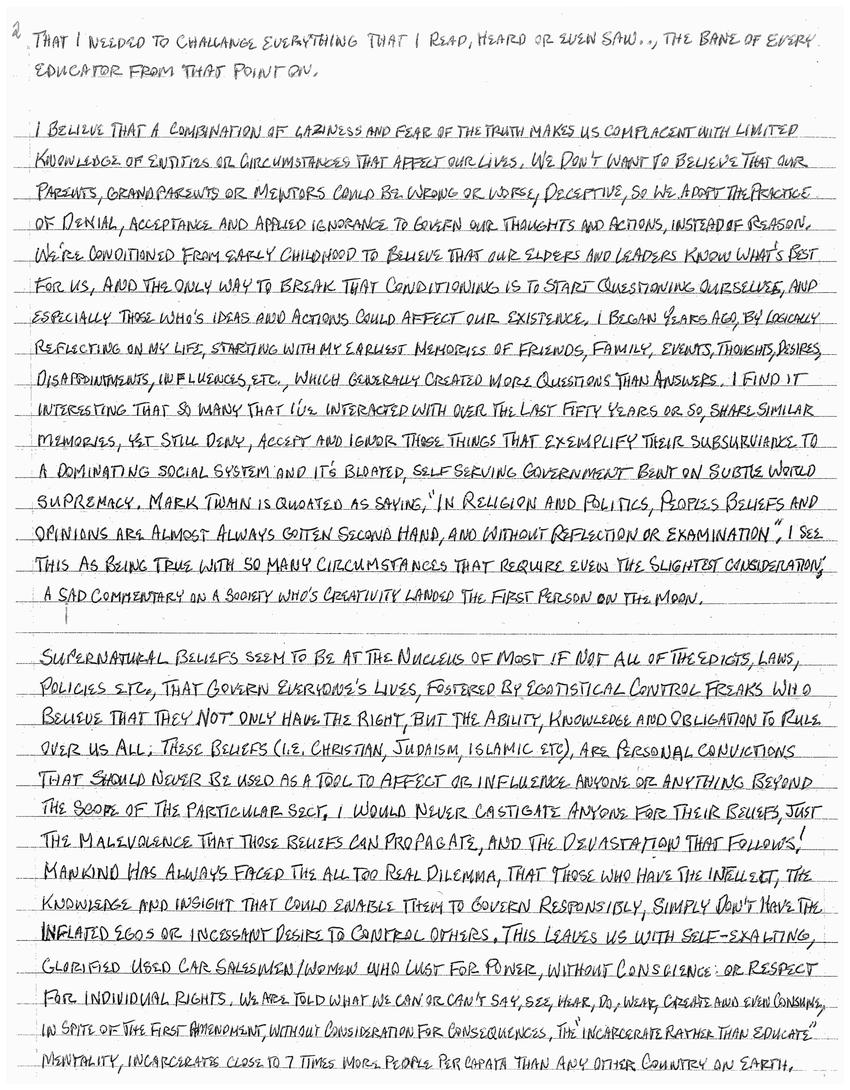 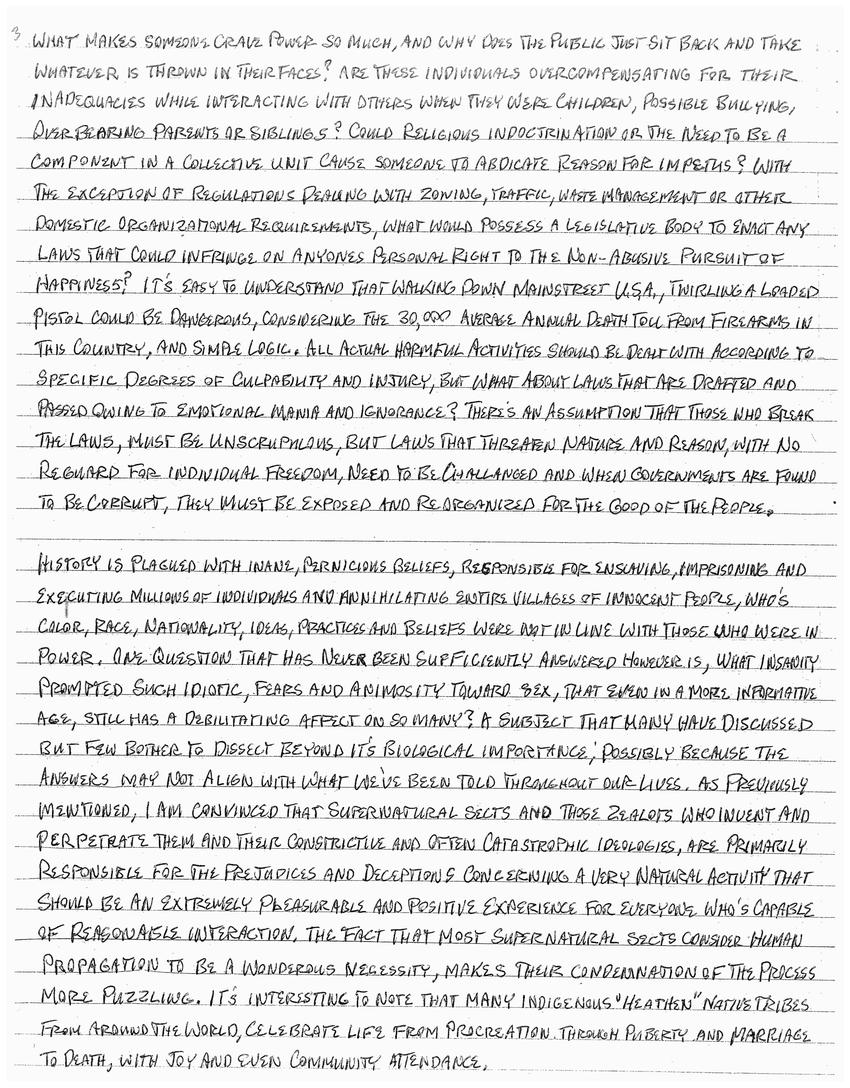 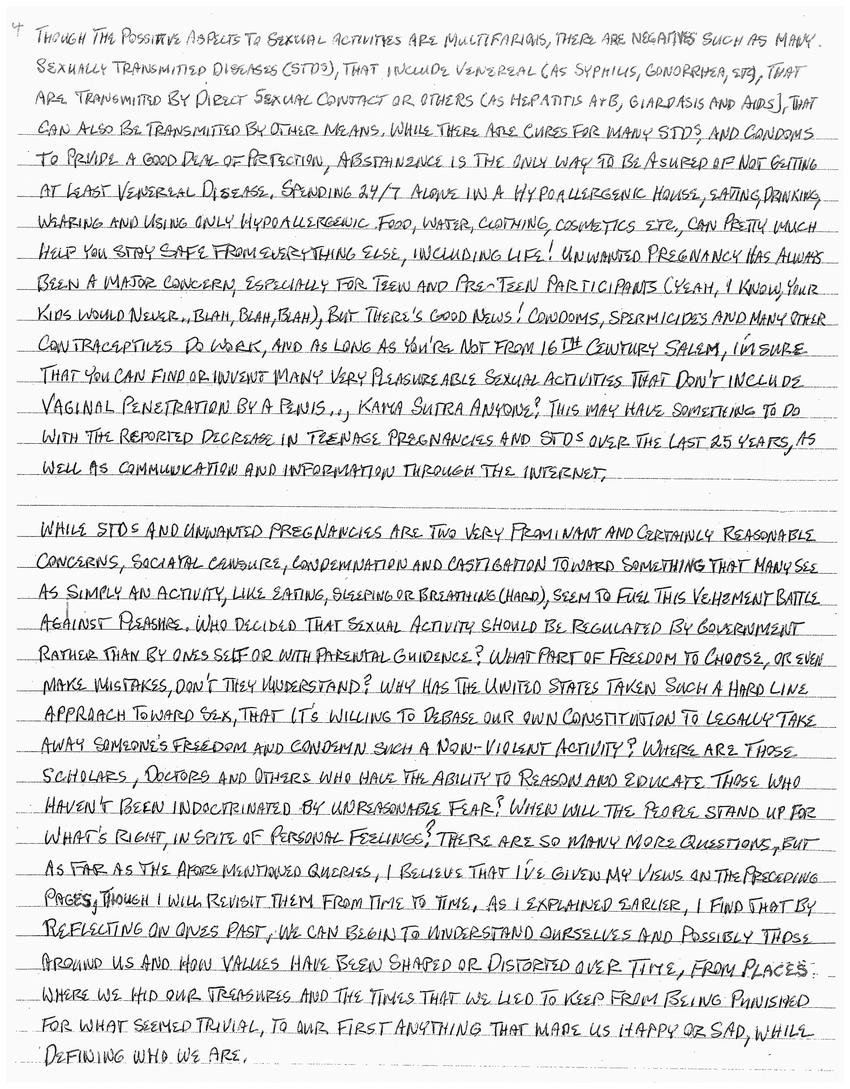 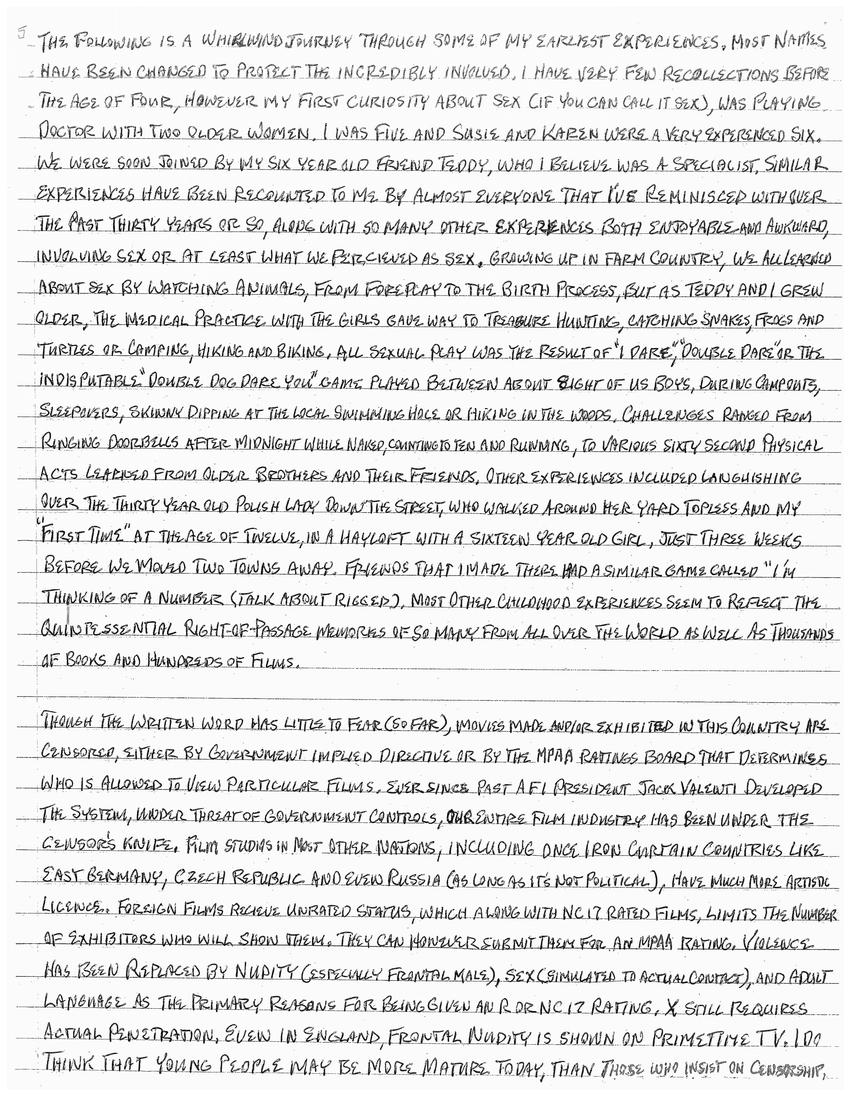 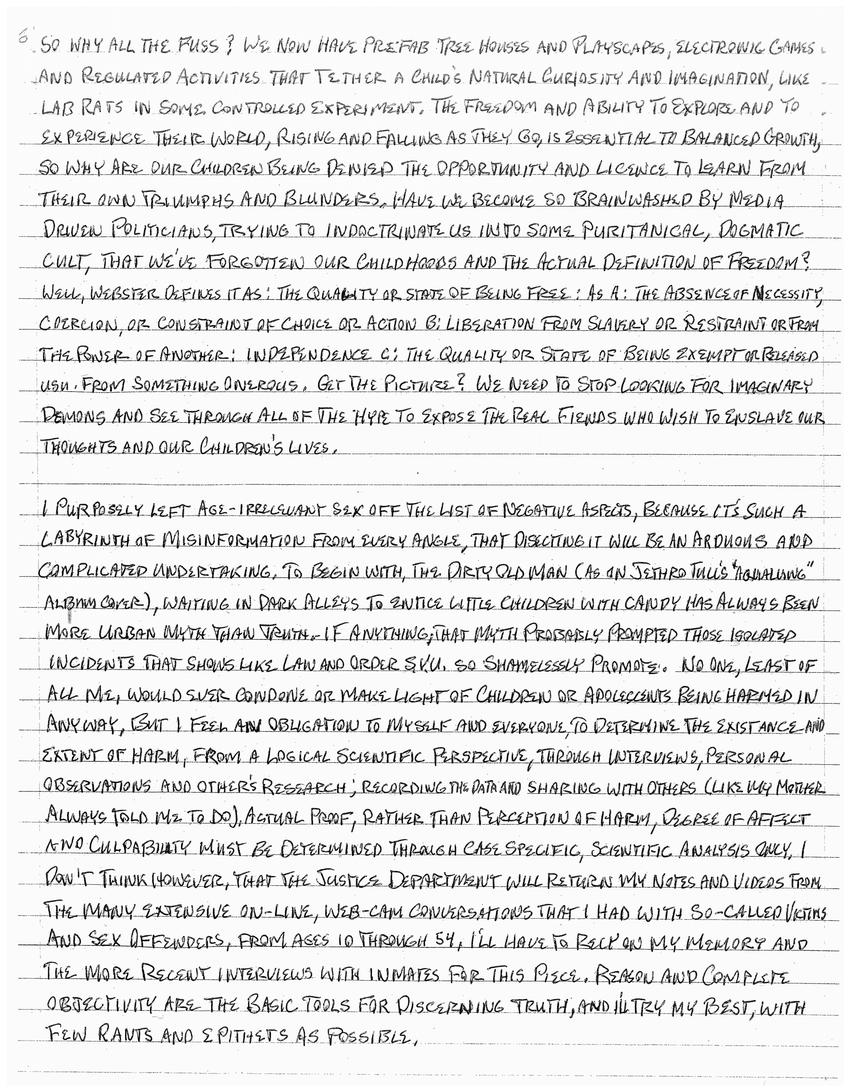 Fear of Sex and the Boogie Man

How do we determine what is correct or incorrect, right or wrong, good or bad, fact or fiction, truth or lie, logical or illogical? Reason! Never adversely affect anyone or anything, has always seemed to be a more than sufficient guide to cover any human interaction between each other and the environment, as in not causing physical financial or where applicable, emotional harm. It's fairly easy to determine that any violence act, theft, or bullying, no matter what the rationale, can cause direct adverse effects, but there are gray areas of human interaction that are questionable as to degree of cause and effect. We put primates, birds, reptiles, fish, dolphins, orcas, and other wildlife in cages and aquariums for our amusement, not really considering how these miniature environments affect their existence. Humans are overpopulation the planet while accepting the belief of the few that the earth will always sustain itself, over the concerns of many who warn of high pollution levels, depleting natural resources, and the possible disastrous effect that the thawing permafrost could have on our existence. Wouldn't it be prudent to meet somewhere in the middle?

While saving the earth is a really good idea, I'm not exactly the cape and spandex-wearing type, so for now I'd just like to try to understand why so many humans have the insatiable desire to control others, ignoring all reason or consideration of consequence, I already know that the questions will be many, and probably more important than the answers, as I hope to ignite dialog or at least self-reflection among those who read this, I'll begin with a question that has bothered me since I was around ten years old. Why don't people question everything that affects them and others, as well as things that don't make sense?

As a child I was taught and told many things, yet felt hampered from actually learning how to learn, or specifically, how to research beyond the boundaries of a restrictive public school system and its curriculum. Mathematics, English and social studies made sense as many of their components are fairly concise, yet science, history, and religion seemed subjective or even fabricated at times, I was expected to accept things as fact that should have been explained as theory, just because they had always been taught that way. A simple experiment by my cleaver sixth-grade teacher finally opened a world of questions and doubt to demonstrate how a story changes from one person to the next, she whispered "Hey diddle diddle, the cat and the fiddle... etc.," to the girl at the first desk, telling her to pass it around the room. By the time it reached me in the fourth row, there was a dog in a wagon being pushed into a ditch by a cow, between that and the whole Santa Claus, Easter bunny, and tooth fairy conspiracy, I was convinced that I needed to challenge everything that I read, heard or even saw..., the bane of every educator from that point on.

I believe that a combination of laziness and fear of the truth makes us complacent with limited knowledge or entities or circumstances that affect our lives, we don't want to believe that tour parents, grandparents, or mentors could be wrong or worse, deceptive, so we adopt the practice of denial, acceptance and applied ignorance to govern our thoughts and actions, instead of reason, we're conditioned from early on to believe that our elders and leaders know what's best for us, and the only way to break that conditioning is to start questioning ourselves, and especially those whose ideas and actions could affect our existence. I began years ago, by logically reflecting on my life, starting with my earliest memories of friends, family, events, thoughts, desires, disappointments, influences, etc., which generally created more questions than answers. I find it interesting that so many that I've interacted with over the last fifty years or so, share similar memories, yet still deny, accept and ignore those things that exemplify their subservience to a dominating social system and its bloated, self-serving government bent on subtle world supremacy. Mark Twain is quoted in saying, "In religion and politics, people's beliefs and opinions are almost always gotten second hand, and without reflection or examination," I see this as being true with so many circumstances that require even the slightest consideration, a sad commentary on a society whose creativity landed the first person on the moon.

Supernatural beliefs are seen to be at en nucleus of most if not all the idiots, laws, policies, etc., that govern everyone's lives, fostered by egotistical control freaks who believe that they not only have the right, but the ability, knowledge, and obligation to rule over us all; these beliefs (i.e. Christian, Judaism, Islamic, etc), are personal convictions that should never be used as a tool to affect or influence anyone or anything beyond the scope of the particular set, I would never castigate anyone for their beliefs, just the malevolence that those beliefs can propagate, and the devastation that follows! Mankind has always faced the all too real dilemma, that those who have the intellect, the knowledge, and insight that could enable them to govern responsibly, simply don't have the inflated egos or incessant desire to control others. This leaves us with self-exalting, glorified used car salesmen/women who lust for power, without conscience or respect for individual rights, we are told what we can or can't say, see, hear, do, wear, create and even consume, in spite of the first amendment, without consideration for consequences, the "incarcerate rather than educate" mentality, incarcerate close to 7 times more people per capita than any other country on earth, what makes someone crave power so much, and why does the public just sit back and take whatever is thrown in their faces? Are these individuals overcompensating for their inadequacies while interacting with others when they were children, possibly bullying, overbearing parents, or siblings? Could religious indoctrination or the need to be a component in a collective nit cause someone to abdicate reason for impetus? With the exception of regulations dealing with zoning, traffic, waste management, or other domestic organizational requirements, what would possess a legislative body to enact any laws that could infringe on anyone's personal right to the non-abusive pursuit of happiness? It's easy to understand that walking down Mainstreet USA, twirling a loaded pistol could be dangerous, considering the 30,000 average annual death toll from firearms in this country, and simple logic. All actual harmful activities should be dealt with according to specific degrees of culpability and injury, but what about laws that are drafted and passed owing to emotional mania and ignorance? There's an assumption that those who break the laws, must be unscrupulous, but laws that threaten nature and reason, with no regard for individual freedom, need to be challenged and when governments are found to be corrupt, they must be exposed and reorganized for the good of the people.

History is plagued with inane, pernicious beliefs, responsible for enslaving, imprisoning, and executing millions of individuals and annihilating entire villages of innocent people, whose color, race, nationality, ideas, practices, and beliefs were not in line with those who were in power. One question that has never been sufficiently answered however is, what insanity promoted such idiotic fears, and animosity toward sex, that even in a more informative age, still has a debilitating effect on so many? A subject that many have discussed but few bother to dissect beyond its biological importance, possibly because the answers may not align with what we've been told throughout our lives. As previously mentioned, I am convinced that supernatural sects and those zealots who invent and perpetrate them and their constrictive and often catastrophic ideologies are primarily responsible for the prejudices and deceptions concerning a very natural activity that should be an extremely pleasurable and positive experience for everyone who's capable of reasonable interaction. The fact that most supernatural sects consider human propagation to be a wonderous necessity, makes their condemnation of the process more puzzling. It's interesting to note that many indigenous "heathen" native tribes from around the world, celebrate life from procreation, through puberty and marriage to death, with joy and even community attendance.

Though the positive aspects to sexual activities are multifarious, there are negatives such as many. Sexually Transmitted Diseases (STDs), that include venereal (as syphilis, gonorrhea, etc), that are transmitted by direct sexual contact or others (as hepatitis A & B, giardiasis, and AIDS), that can also be transmitted by other means, while there are cures for many STDs, and condoms to provide a good deal of protection, abstinence is the only way to be assured of not getting at least venereal disease, spending 24/7 alone in a hypoallergenic house, eating, drinking, wearing and using only hypoallergenic food, water, clothing, cosmetics etc., can pretty much help you stay safe from everything else, including life! Unwanted pregnancy has always been a major concern, especially for teen and pre-teen participants (Yeah, I know, your kids would never, blah, blah, blah,), but there's good news! Condoms, spermicides and many other contraceptives do work, and as long as you're not from 16th century Salem, I'm sure that you can find or invent many very pleasurable sexual activities that odn't include vaginal penetration by a penis, Kama Sutra anyone? This may have something to do with the reported decrease in teenage pregnancies and STDs over the last 25 years, as well as communication and information through the internet.