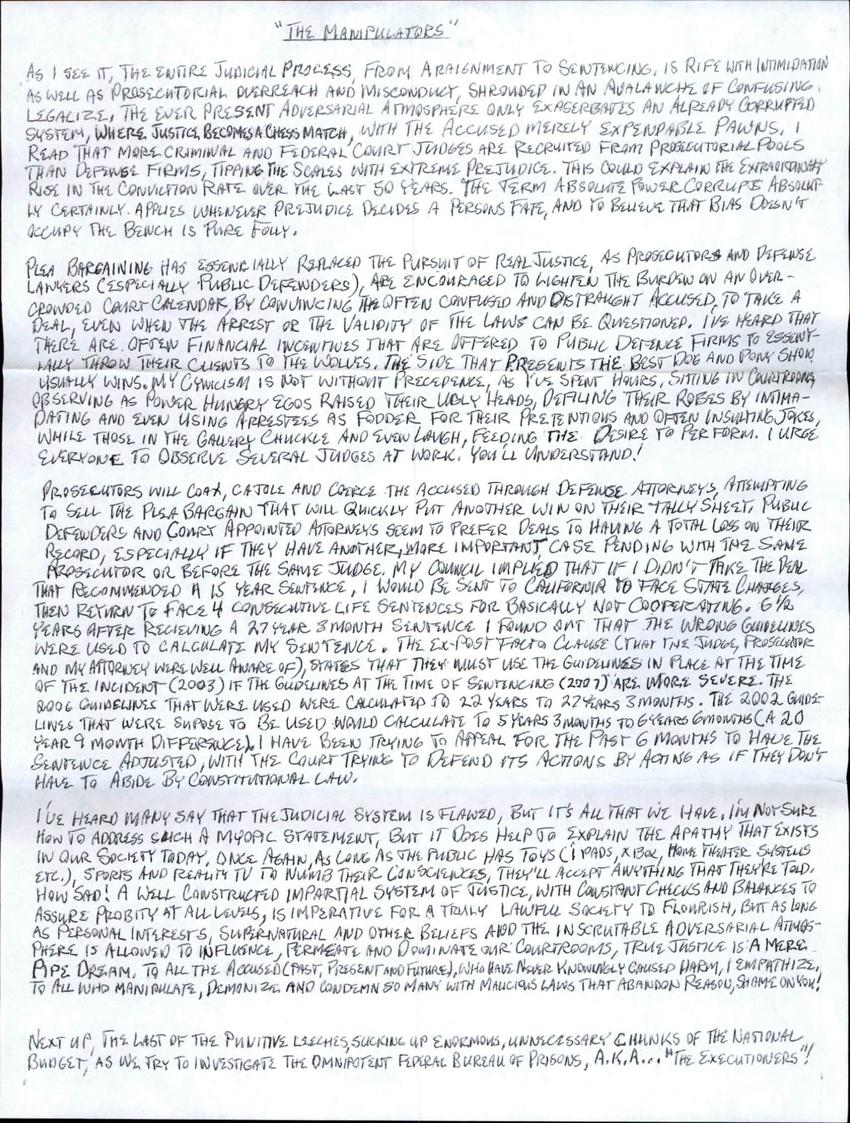 As I see it, the entire judicial process, from arraignment to sentencing, is rife with intimidation as well as prosecutorial overreach and misconduct, shrouded in an avalanche of confusing legalese. The ever present adversarial atmosphere only exacerbates an already corrupted system where justice becomes a chess match with the accused merely expendable pawns. I read that more criminal and federal court judges are recruited from prosecutorial pools than defense firms, tipping the scales with extreme prejudice. This could explain the extraordinary rise in the conviction rate over the last 50 years. The term absolute power corrupts absolutely certainly applies whenever prejudice decides a person's fate and to believe that bias doesn't occupy the bench is pure folly.

Plea bargaining has essentially replaced the pursuit of real justice as prosecutors and defense lawyers (especially public defenders) are encouraged to lighten the burden on an over-crowded court calendar by convincing the often confused and distraught accused to take a deal even when the arrest or validity of the law can be questioned. I've heard that there are often financial incentives that are offered to public defence firms to essentially throw their clients to the wolves. The side that presents the best dog and pony show usually wins. My cynicism is now without precedence as the spent hours sitting in courtrooms observing as power hungry egos raised their ugly hands, defiling their robes by intimidating and even using addresses as fodder for their pretentious and often insulting jokes, while those in the gallery chuckle and even laugh, feeding the desire to perform. I urge everyone to observe several judges at work. You'll understand!

Prosecutors will coax, cajole and coerce the accused through defense attorneys, attempting to sell the plea bargain that will quickly put another win on their tally sheet. Public defenders and court appointed attorneys seems to prefer deals to having a total loss on their record, especially if they have another, more important, case pending with the same prosecutor or before the same judge. My counsel implied that if I didn't take the deal that recommended a 15 year sentence I would be sent to California to face state charges then return to face 4 consecutive life sentences for basically not cooperating. 6 1/2 years after receiving a 27 year 3 month sentence I found out that the wrong guidelines were used to calculate my sentence. The ex-post facto clause (that the judge, prosecutor and my attorney were well aware of) states that they must use the guidelines in place at the time of the incident (2003) if the guidelines at the time of sentencing (2007) are more severe. The 2006 guidelines that were used were calculated to 22 years to 27 years 3 months. The 2002 guidelines that were supposed to be used would calculate to 5 years 3 months to 6 years 6 months (a 20 year, 9 month difference), I have been trying to appeal for the past 6 months to have the sentence adjusted with court trying to defend its actions by acting as if they don't have to abide by constitutional law.

I've heard many say that the judicial system is flawed but it's all that we have. I'm not sure how to address such a myopic statement but it does help to explain the apathy that exists in our society today. Once again, as long as the public has toys (Ipads, Xbox, home theater systems etc.), sports and reality tv to numb their consciences, they'll accept anything that they're told. How sad! A well constructed impartial system of justice, with constant check and balances to assure probity at all levels, is imperative for a truly lawful society to flourish. But as long as personal interests, supernatural and other beliefs and the inscrutable adversarial atmosphere is allowed to influence, permeate and dominate our courtrooms, true justice is a mere pipe dream. To all the accused (past, present and future) who have never knowingly caused harm, I empathize. To all who manipulate, demonize and condemn so many with malicious laws that abandon reason, shame on you!

Next up, the last of the punitive leeches, sucking up enormous, unnecessary chunks of the national budget, as we try to investigate the omnipotent Federal Bureau of Prisons, A.K.A... "The Executioners"!

Hi again Craig. Its me Kim from UA. MOVIE THEATRE. have a wonderful Thanksgiving. My email is kvnct267@hotmail.com.