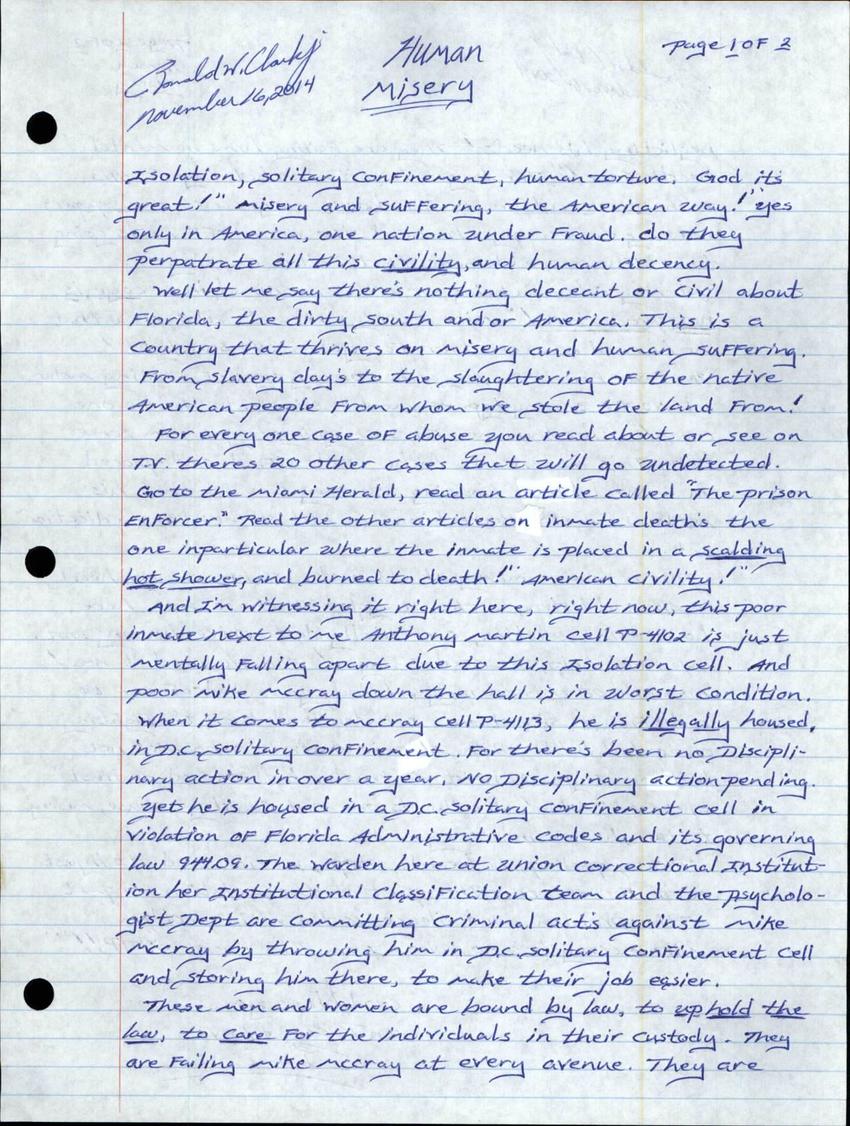 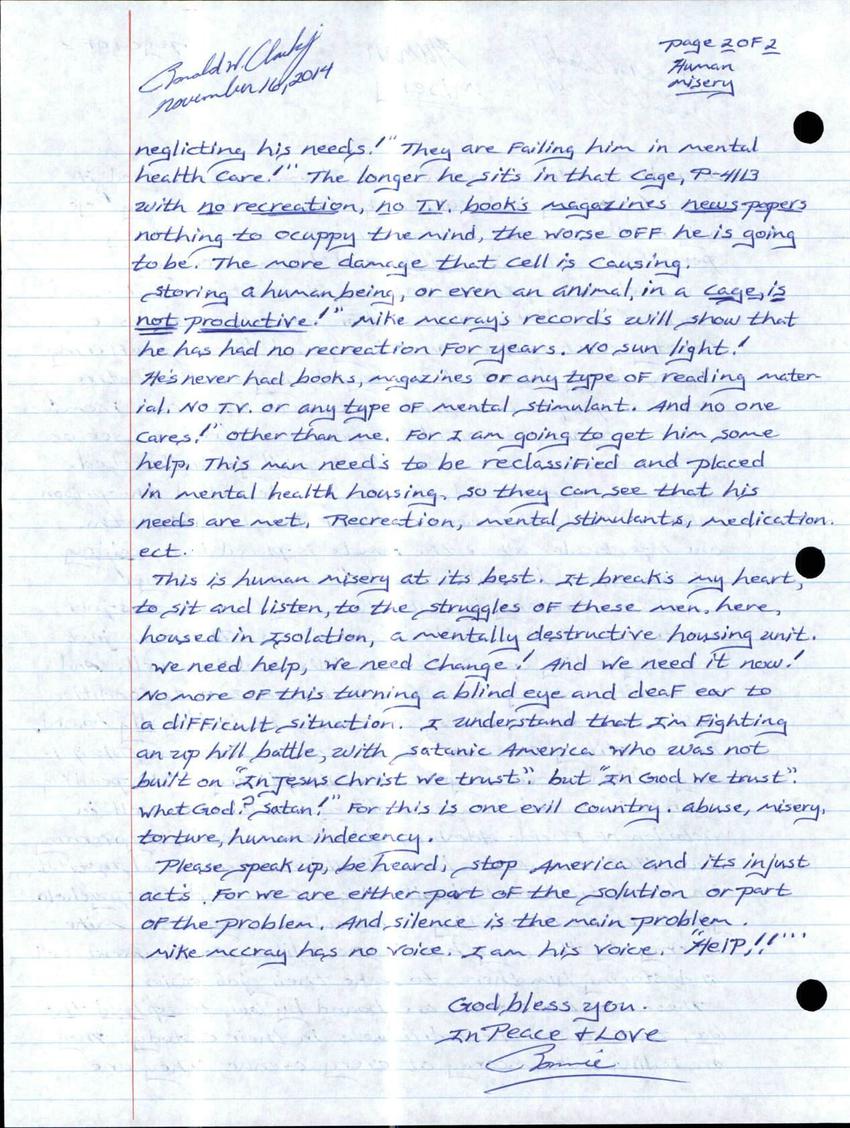 Isolation, solitary confinement, human torture. God it's great! Misery and suffering, the American way! Yes, only in America, one nation under fraud do they perpetrate all this "civility" and human decency.

Well let me say there's nothing decent or civil about Florida, the dirty south and/or America. This is a country that thrives on misery and human suffering. From slavery days to the slaughtering of the Native American people from whom we stole the land from!

For every one case of abuse you read about or see on TV, there's 20 other cases that will go undetected. Go to the Miami Herald, read an article called "The Prison Enforcer". Read the other articles on inmate deaths, the one in particular where the inmate is placed in a SCALDING HOT SHOWER and burned to death! American civility! And I am witnessing it right here, right now, this poor inmate next to me, Anthony Martin Cell P-4101, is just mentally falling apart due to this isolation cell. And poor Mike McCray down the hall is in worse condition. When it comes to McCray Cell P-4113, he is ILLEGALLY housed in D.C. solitary confinement. For there's been no disciplinary action in over a year, no disciplinary action pending, yet he is housed in D.C. solitary confinement cell in violation of Florida administrative codes and its governing law 944.09. The warden here at Union Correctional Institution, her institutional classification team and the psychologist dept. are committing criminal acts against Mike McCray by throwing him in a D.C. solitary confinement cell and storing him there, to make their job easier.

These men and women are bound by law, to UPHOLD THE LAW, to CARE for the individuals in their custody. They are failing Mike McCray at every avenue. They are neglecting his needs! They are failing him in mental health care! The longer he sits in that cage, P-4113, with NO RECREATION, NO TV, BOOKS, MAGAZINES, NEWSPAPERS, nothing to occupy the mind, the worse off he is going to be. The more damage that cell is causing.

Storing a human being, or even an animal, in a CAGE IS NOT PRODUCTIVE! Mike McCray's record will show that he has had no recreation for years. No sunlight! He's never had books, magazines or any type of reading material. No TV or any type of mental stimulant. And no one cares! Other than me. For I am going to get some help. This man needs to be reclassified and placed in mental health housing. So they can see that this needs are met, recreation, mental stimulants, medication, etc.

This is human misery at its best. It breaks my heart, to sit and listen to the struggles of these men here, housed in isolation, a mentally destructive housing unit. We need help, we need change! And we need it now! No more of this turning a blind eye and deaf ear to a difficult situation. I understand that I'm fighting an up hill battle, with satanic America who was not built on "In Jesus Christ, we trust." but "In God We Trust." What God? Satan! For this is one evil country. Abuse, misery, torture, human indecency.

Please speak up, be heard, stop America and its unjust acts. For we are either part of the solution or part of the problem. And, silence is the main problem. Mike McCray has no voice. I am his voice. HELP!!!

Could you please give the full name of McCray and his DOC#? Thank you. I find it difficult to "get behind" any cause without researching the background.
"For this is one evil country, abuse, misery, torture, human indecency"

Seems, for some reason, you forgot to put murder on this list.

SAH, I assume he is referring to Gary Mccray J01369 he had competency issues with his trial.