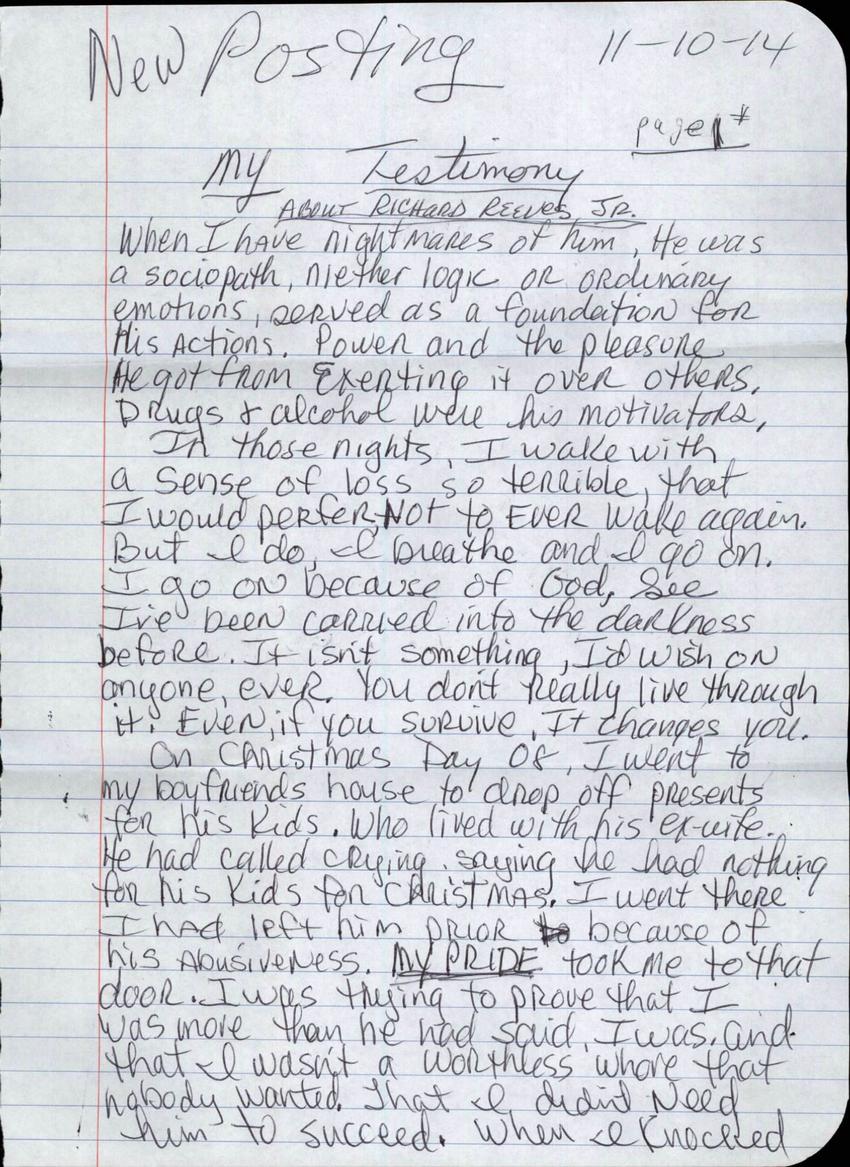 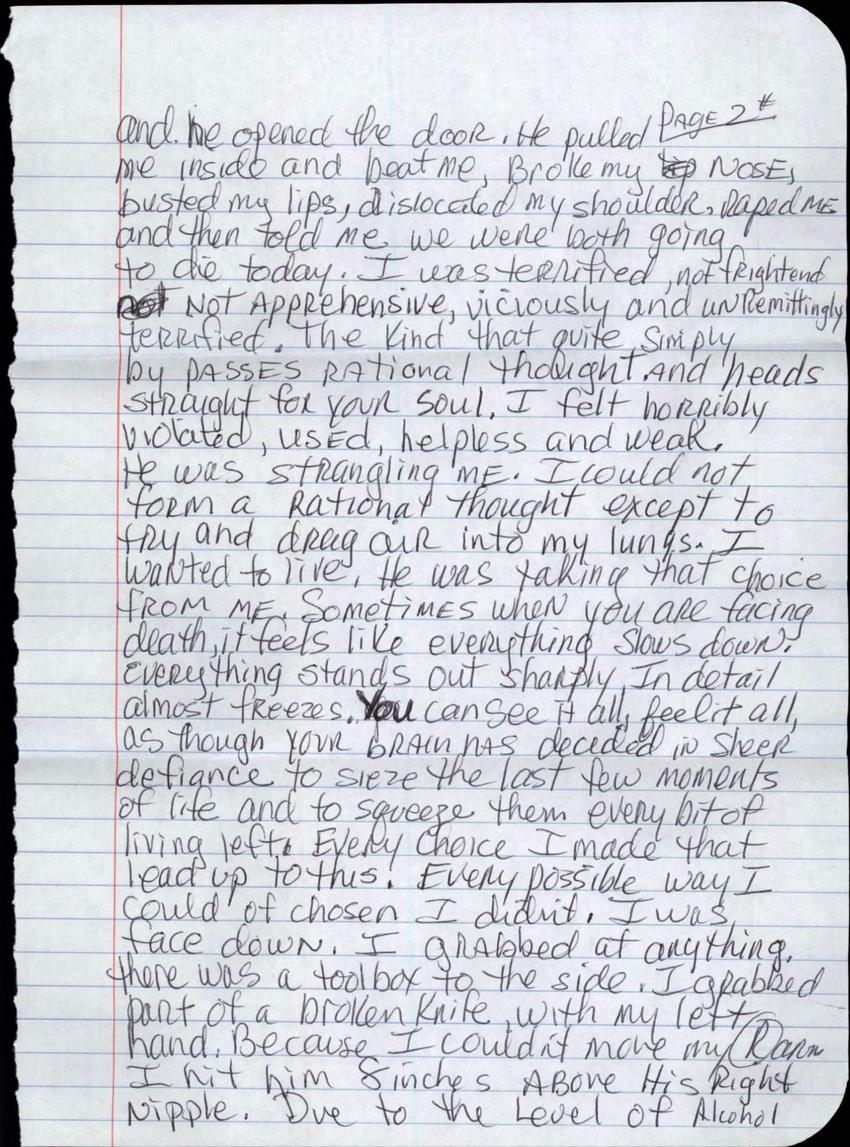 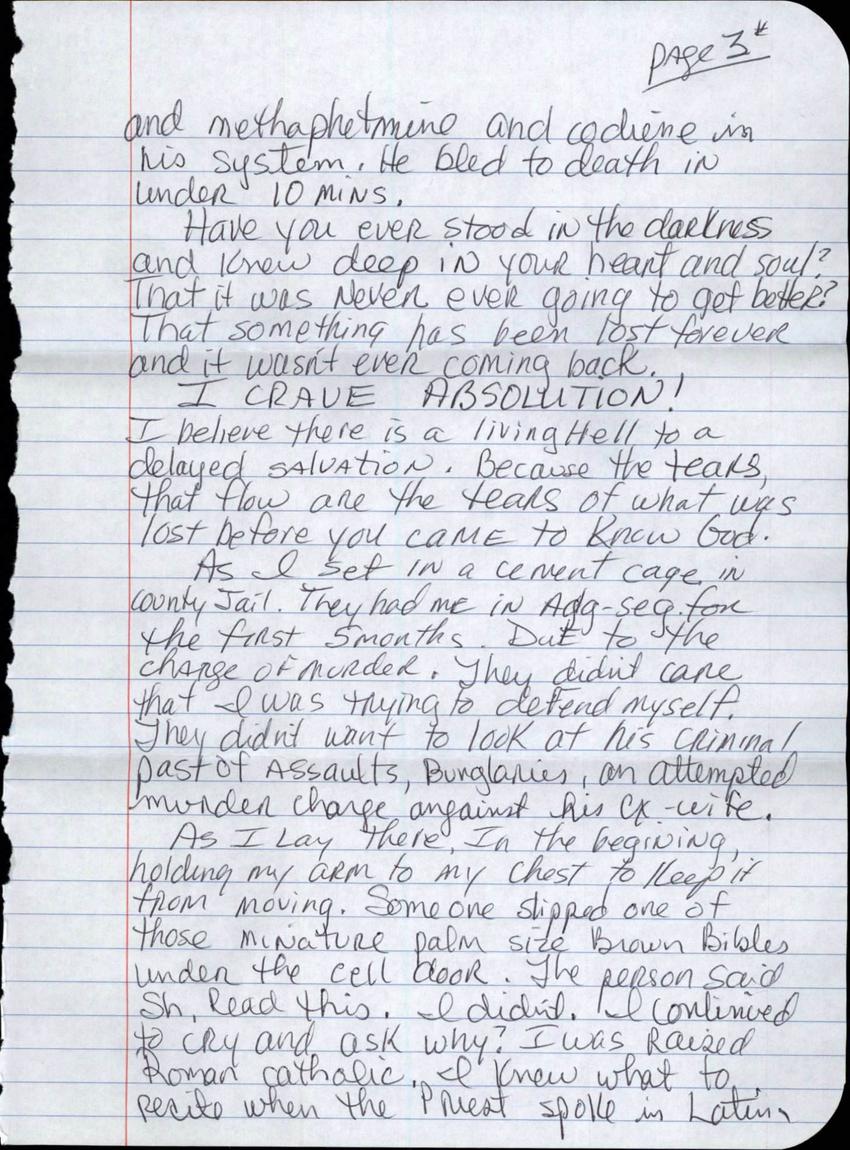 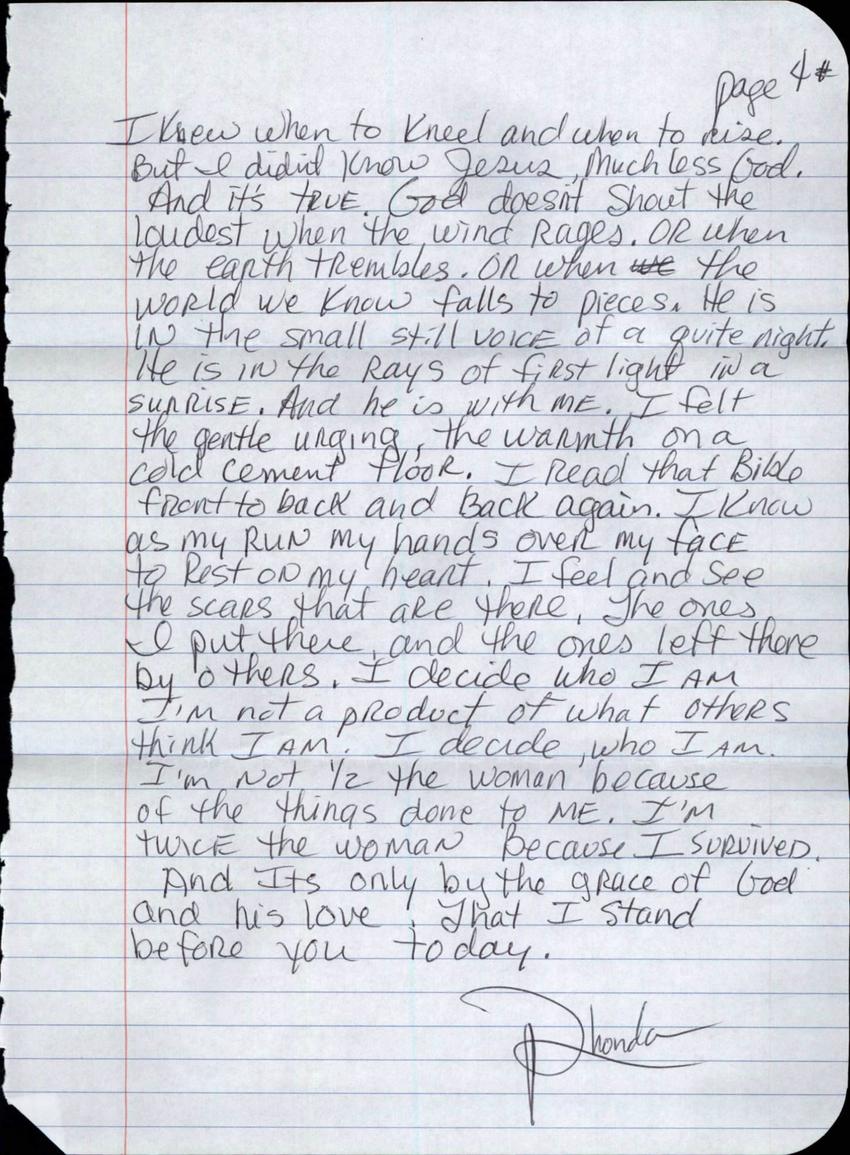 My Testimony
About Richard Reeves, Jr.

When I have nightmares of him, he was a sociopath. Neither logic nor ordinary emotions served as a foundation for his actions. Power and pleasure he got from exerting it over others. Drugs and alcohol were his motivators.

In those nights, I wake with a sense of loss so terrible that I would prefer not to ever wake again. But I do, I breathe and I go on. I go on because of God. See, I've been carried into darkness before. It isn't something I'd wish on anyone, ever. You don't really live through it. Even if you survive, it changes you.

On Christmas Day '08, I went to my boyfriend's house to drop off presents for his kids who lived with his ex-wife. He had called crying, saying that he had nothing for his kids for Christmas. I went there. I had left him prior because of his abusiveness. My pride took em to that door. I was trying to prove that I was more than he had said (I was), and that I wasn't a worthless whore that nobody wanted. That I didn't need him to succeed.

When I knocked and he opened the door, he pulled me inside and beat me, broke my nose, busted my lops, dislocated my shoulder, raped me, and then told me we were both going to die today. I was so terrified, not frightened, not apprehensive—viciously and unremittingly terrified. The kind that quite simply bypasses rational thought and heads straight for your soul. I felt horribly violated, used, helpless, and weak. He was strangling me. I could not form a rational thought except to try and drag air into my lungs. I wanted to live. He was taking that choice from me.

Sometimes, when you are facing death, it feels like everything slows down. Everything stands out sharply, in detail, almost freezes. You can see it all, feel it all, as though your brain has decided in sheer defiance to seize the last few moments of life and to squeeze them every bit of living left.

Every choice that I made led up to this. Every possible way I could have chosen, I didn't. I was face down. I grabbed at anything. There was a toolbox to the side. I grabbed the part of a broken knife with my left hand. Because I couldn't move my right arm, I hit him eight inches above his right nipple. Due to the level of alcohol and methaphetmine and codine in his system, he bled to death in under ten minutes.

Have you ever stood in the darkness and knew deep in your heart and soul that it was never ever going to be better? That something has been lost forever and it wasn't ever coming back?

I believe that there is a living hell to a delayed salvation. Because the tears that flow are the tears of what was lost before you came to know God.

As I set in a cement cage in county jail. They had me in agg-seg for the first five months. Due to the charge of murder. They didn't care that I was trying to defend myself. They didn't want to look at his criminal past of assaults, burglaries, an attempted murder charge against his ex-wife.

As I lay there, in the beginning holding my arm to my chest to keep it from moving, someone slipped one of those miniature palm-sized brown Bibles under the cell door. The person said, "Shh, read this." I didn't. I continued to cry and ask why. I was raised Roman catholic. I knew what to recite when the priest spoke in Latin. I knew when to kneel and when to rise. But I didn't know Jesus, much less God.

I felt a gentle urging, the warmth on the cold cement floor. I read that Bible front to back and back again. I know as I run my hands over my face to rest on my heart. I feel and see the scars that are there. The ones I put there and the ones left there by others. I decide who I am. I'm not a product of what others think I am. I decide who I am. I'm not half the woman because of the things done to me. I'm twice the woman because I survived. And it's only by the grace of God and His love that I stand before you today.