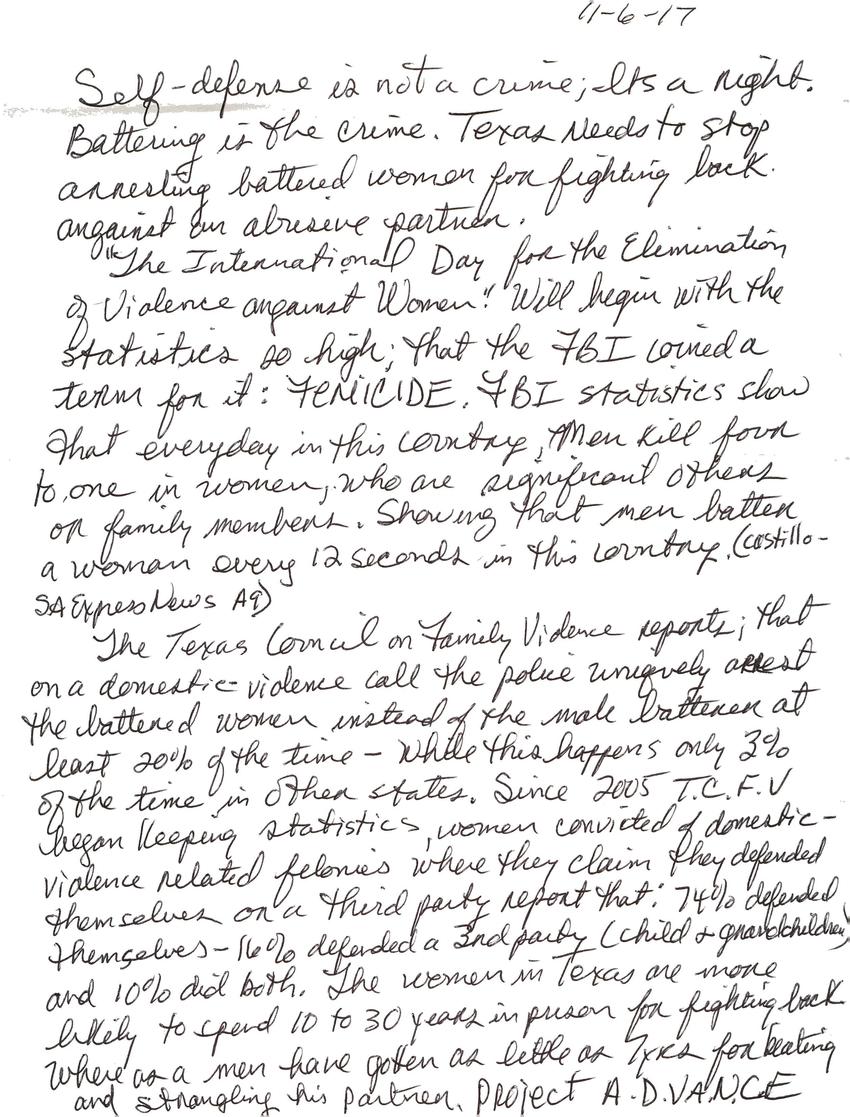 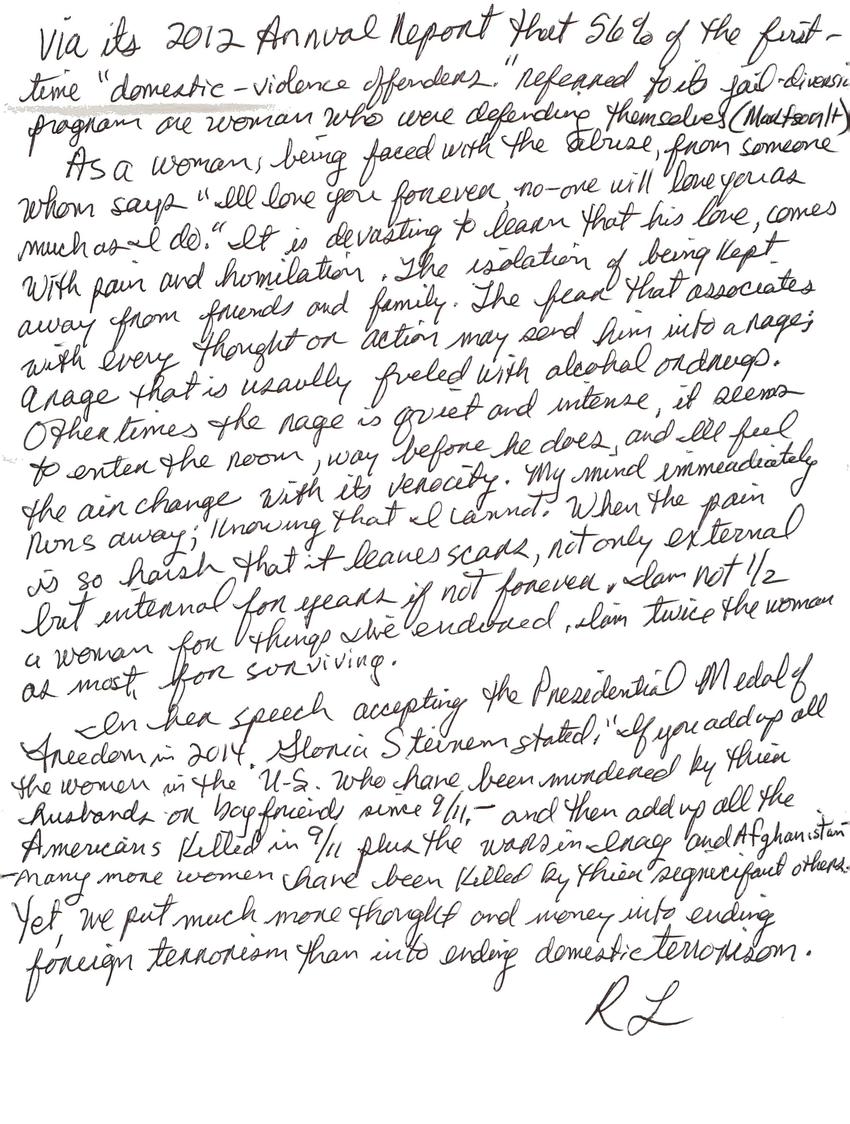 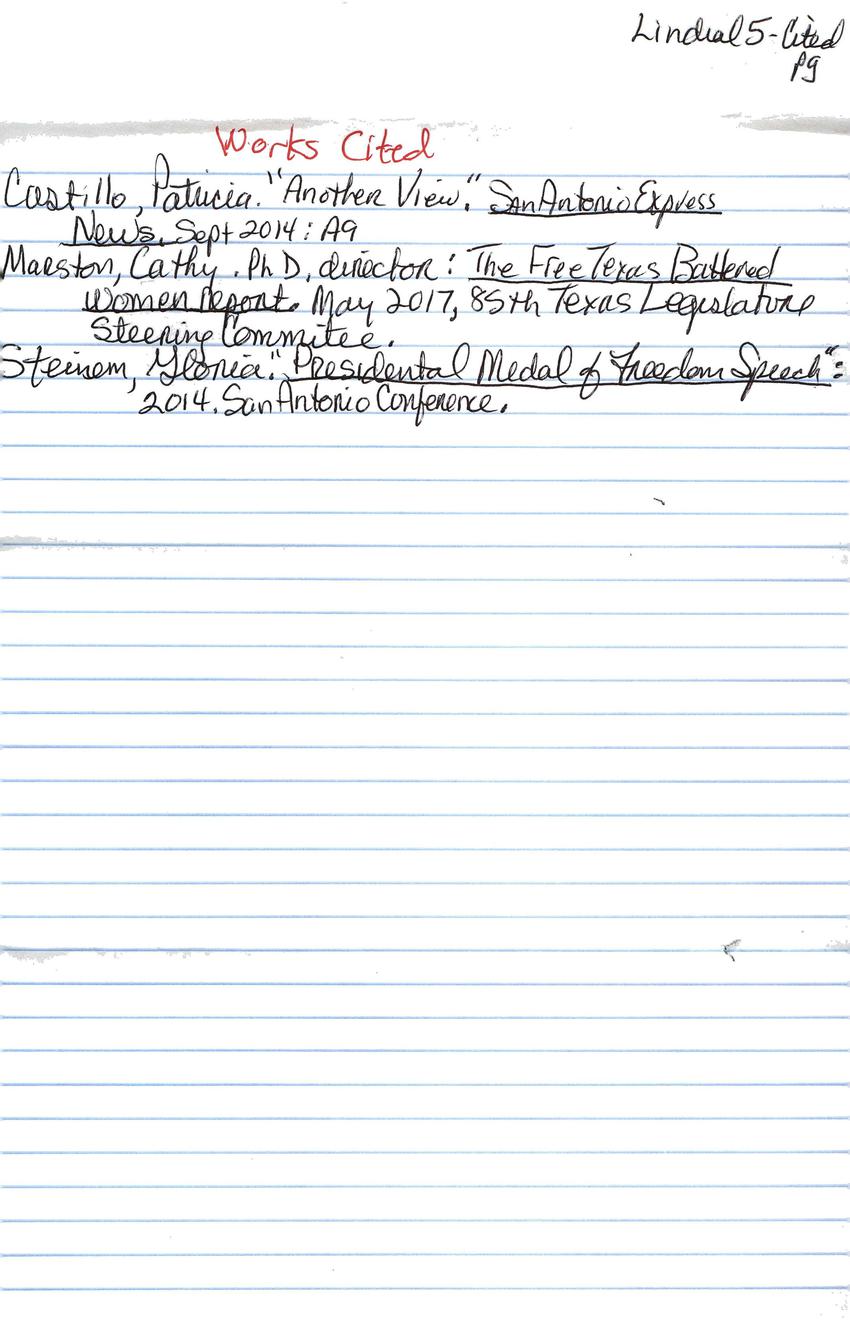 Self-defense is not a crime, it's a right. Battering is the crime. Texas needs to stop arresting battered women for fighting back against an abrasive partner.

"The International Day for the Elimination of Violence Against Women" will begin with the statistics so high that the FBI coined a term for it: femicide. FBI statistics show that every day in this country, men kill four to one in women who are significant others or family members, showing that men batter a woman every 12 seconds in this country (Castillo-SA Express News A9).

The Texas Council on Family Violence reports that on a domestic violence call, the police uniquely arrest the battered woman instead of the male batterer at least 20% of the time, while this only happens 3% of the time in other states. Since 2005, T.C.F.V. began keeping statistics women convicted of domestic violence related felonies where they claim they defended themselves on a third party report that 74% defended themselves, 16% defended a third party (children and/or grandchildren), and 10% did both. The women in Texas are more likely to spend 10 to 30 years in prison for fighting back whereas men have gotten as little as 7 years for beating and strangling his partner (Project A.D.V.A.C.E.) via its 2012 annual report that 56% of the first-time "domestic violence offenders" referred to its jail diversity program are women who were defending themselves (Madfsoalt).

As a woman being faced with the abuse from someone who says "I'll love you forever, no one will love you as much as I do," it is devastating to learn that his love comes with pain and humiliation. The isolation of being kept away from friends and family. The fear that associates with every thought or action may send him into a rage, a rage that is usually fueled with alcohol or drugs. Other times, the rage is quiet and intense. It seems to enter the room, way before he does, and I'll feel the air change with its veracity. My mind immediately runs away, knowing that I cannot. When the pain is so harsh that it leaves scars, not only external but internal for years, if not forever. I am not half a woman for things I've endured, I'm twice the woman as most for surviving.

In her acceptance speech for the Presidential Medal of Freedom in 2014, Gloria Steinem stated, "If you add up all the women in the U.S. who have been murdered by their husbands or boyfriends since 9/11 and then add up all the Americans killed in 9/11 plus the wars in Iraq and Afghanistan, many more women have been killed by their significant others. Yet we put much more thought and money into ending foreign terrorism than into ending domestic terrorism."

Yeah, our system is Definitely corrupt. But keep up the good fight sister, the people's confidence in this form if 'justuce' us fading every day. Keep bringing these abuses if power to light