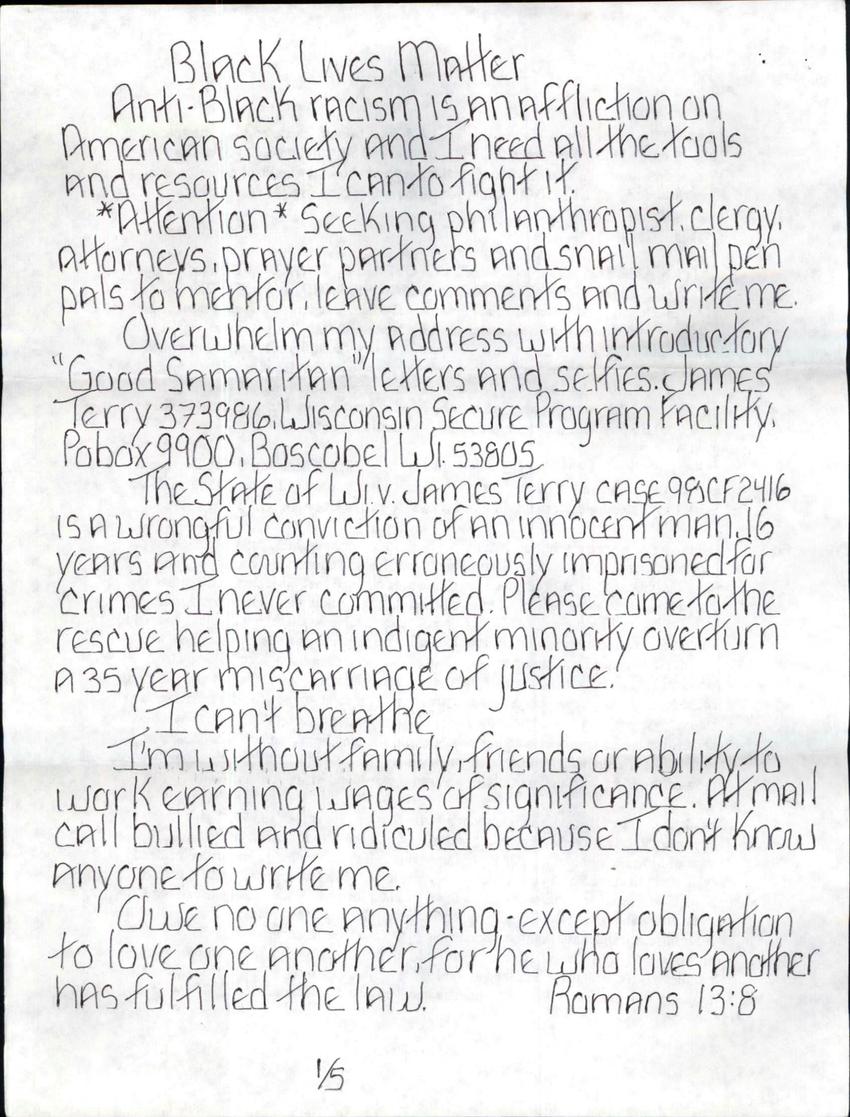 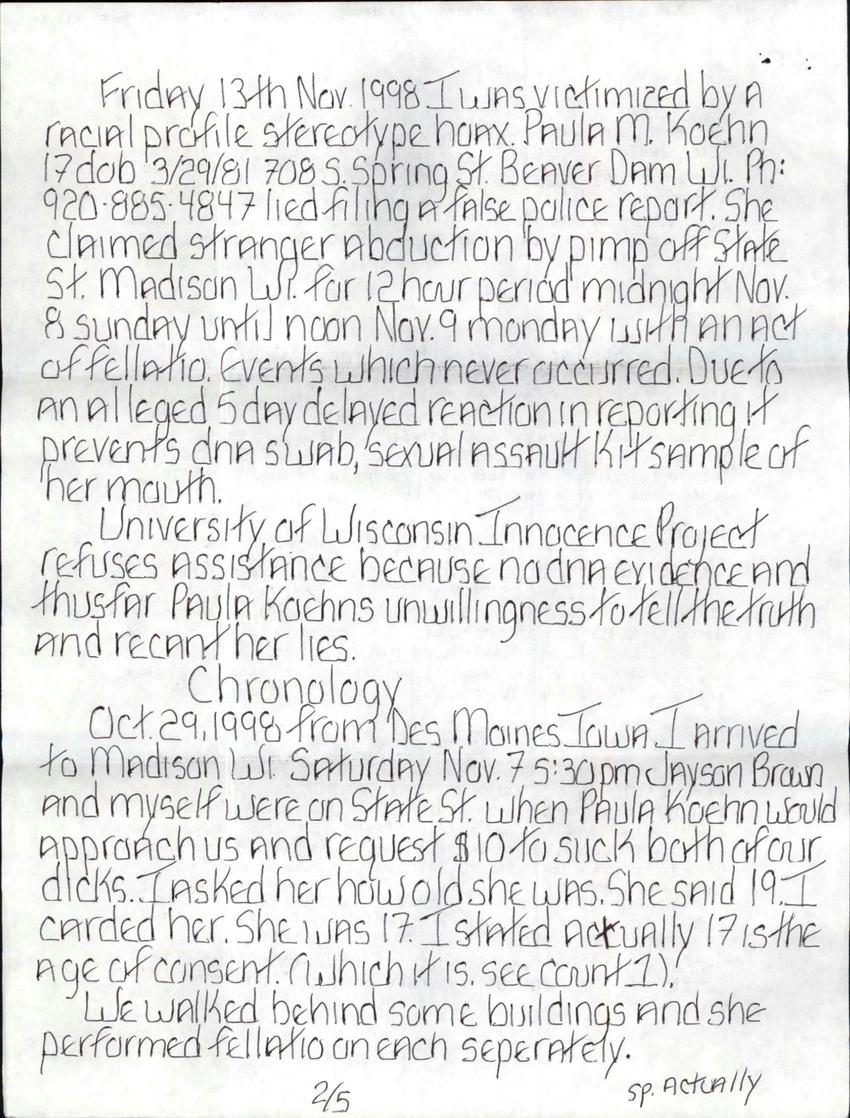 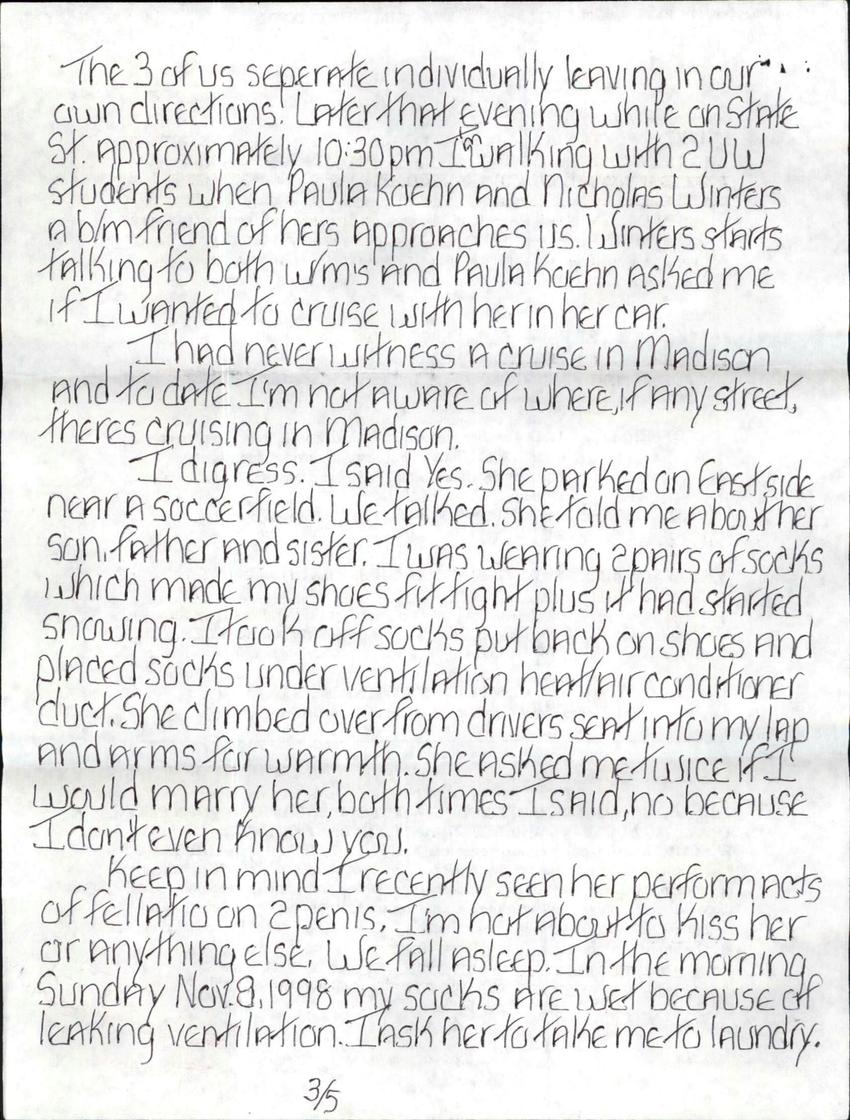 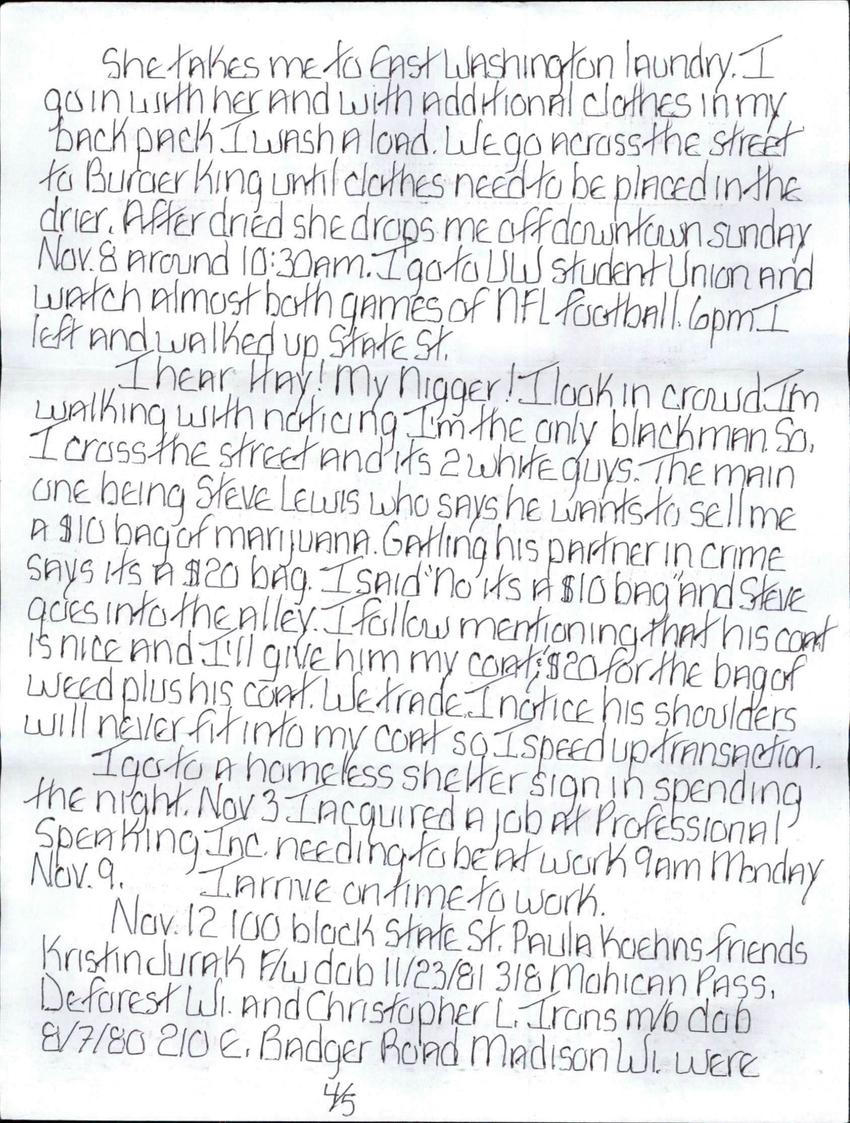 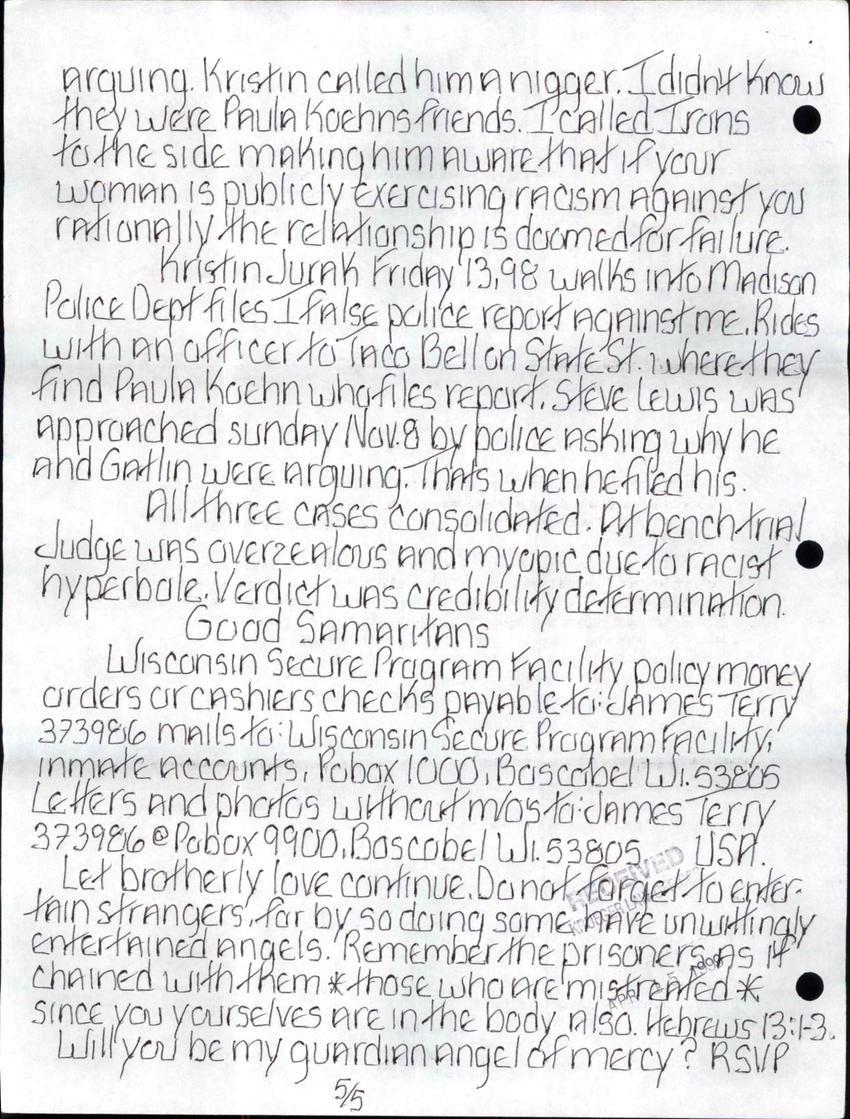 Black Lives Matter
Anti-black racism is an affliction on American society, and I need all the tools and resources I can to fight it.

The state of WI vs. James Terry (case 98CF2416) is a wrongful conviction of an innocent man. 16 years and counting. Erroneously imprisoned for crimes I never committed. Please come to the rescue and help an indigent minority overturn a 35-year miscarriage of justice.

I'm without family, friends, or the ability to work an earning wage of significance. At mail call, I'm bullied and ridiculed because I don't know anyone who will write to me.

Owe no one anything except obligation to love one another, for he who loves another has fulfilled the law.
Romans 13:8

The three of us separated individually leaving in our own directions. Later that evening, while on State St., approximate on 10:30 PM, I was walking with two UW students when Paula Koehn and Nicholas Winters, a b/m friend of hers, approaches us. Winters starts talking to both of us and Paula Koehn asked me if I wanted to cruise with her in her car.

I had never witnessed a cruise in Madison and, to date, I'm not aware of where, if any street, there's cruising in Madison.

I digress. I said yes. She parked on East Side near a soccer field. We talked. She told me about her son, father, and sister. I was wearing two pairs of socks, which made my shoes fit tight. Plus, it had started to snow. I took off my socks, put back on shoes, and placed socks under ventilation heat/air conditioner duct. She climbed over from the driver's seat into my lap and arms for warmth. She asked me twice if I would marry her. Both times I said no because I don't even know her.

She takes me to East Washington Laundry. I go in with her and with additional clothes in my backpack. I wash a load. We go across the street to Burger King until clothes need to be placed in the drier. After they're dried, she drops me off downtown Sunday, Nov. 8 around 10:30 AM. I go to UW student union and watch almost both games of NFL football. 6 PM, I left and walked up State St.

I hear, "Hey! My nigger!" I look in the crowd. I'm walking with noticing that I'm the only black man. So I cross the street, and it's two white guys, the main one being Steve Lewis who says he wants to sell me a $10 bag of marijuana. Gatlin, his partner in crime, says it's a $20 bag. I said, "No, it's a $10 bag," and Steve goes into the alley. I follow, mentioning that his coat is nice and I'll give him my coat. $20 for the bag of weed plus his coat. We trade. I notice his shoulders.

I go to a homeless shelter, sign in, and spend the night. Nov. 3, I acquired a job at Professional Speaking Inc., needing to be at work on Monday, Nov. 9, 9 AM. I arrive to work on time.

Nov. 12, 100 Block State St., Paula Koehn's friends, Kristin Jurak (white female, DOB 11/23/81, 318 Mohican Pass, Deforest, WI) and Christopher L. Irons (black male, DOB 8/7/80, 210 E. Badger Road, Madison, WI) were arguing. Kristin called him a nigger. I didn't know they were Paula Koehn's friends. I called Irons to the side, making him aware that if your woman is publicly exercising racist remarks towards you, you know the relationship is rationally doomed for failure.

Kristin Jurak, Friday 13, 1998, walks into Madison Police Department, files one false police report against me. Rides with an officer to Taco Bell on State St. where they find Paula Koehn, who files a report. Steve Lewis was approached Sunday, Nov. 8, by police asking why and Gatlin were arguing. That's when he filed his.

All three cases consolidated. At bench trial, judge was overzealous and myopic due to racist hyperbole. Verdict was credibility determination.

Let brotherly love continue. Do not forget to entertain strangers. By doing so, some have unwittingly entertained angels. Remember the prisons as if chained with them. Those who are mistreated. Since you yourselves are in the body also. Hebrews 13:1-3

Will you be my guardian angel of mercy? RSVP