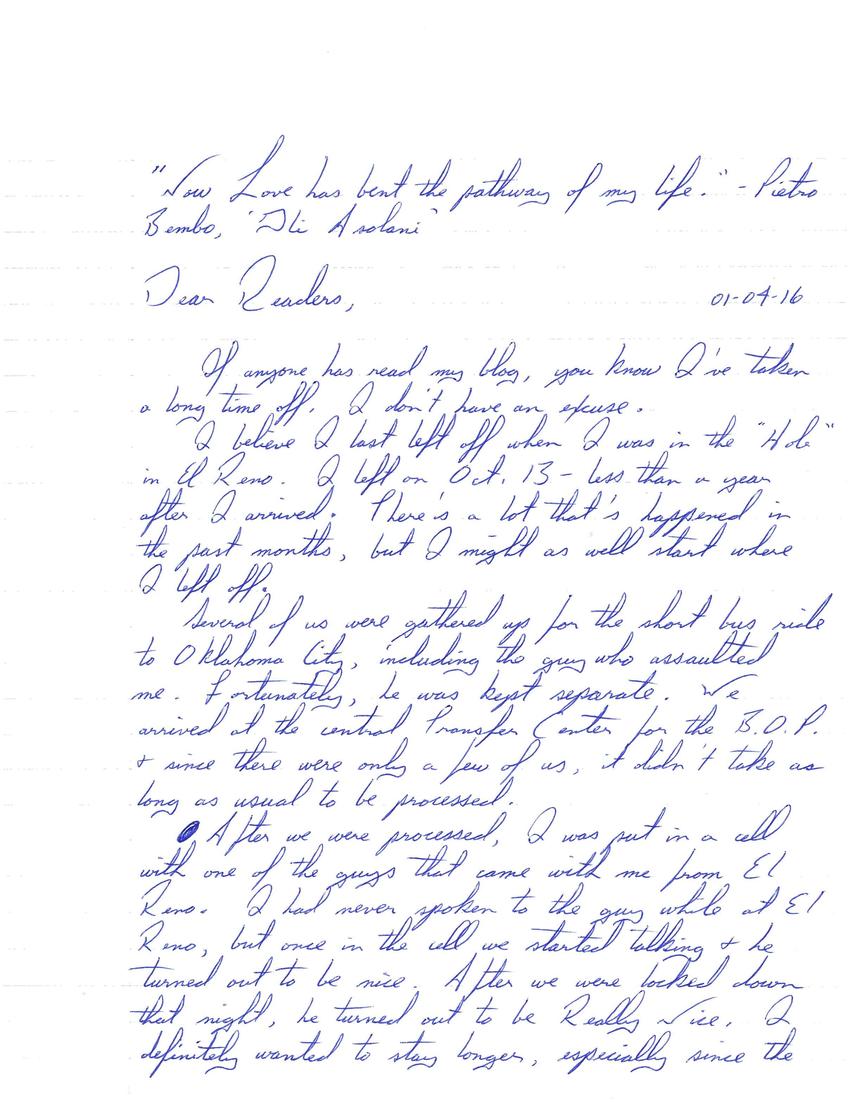 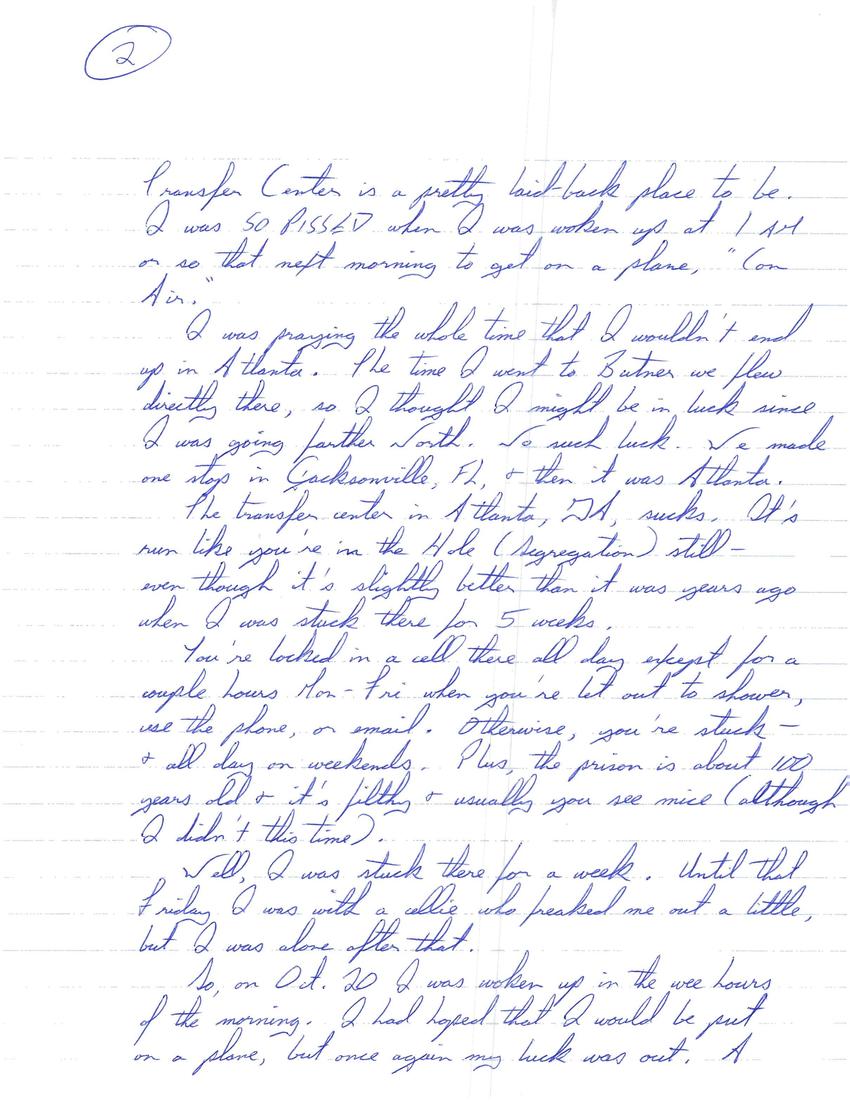 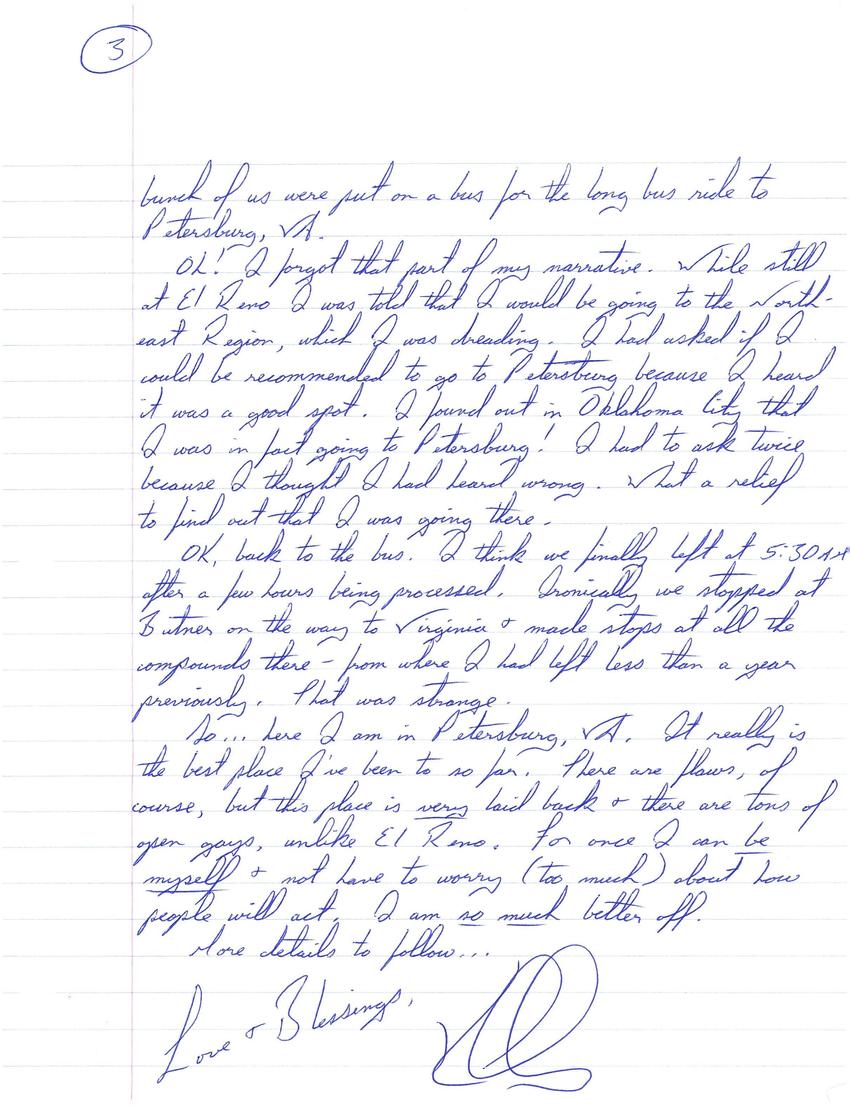 "Now Love has bent the pathway of my life." Pietro Bembo, "Gli Asolani"

If anyone has read my blog, you know I've taken a long time off. I don't have an excuse.

I believe I last left off when I was in the "Hole" in El Reno. I left on Oct. 13—less than a year after I arrived. That's a lot that's happened in the past months, but I might as well start where I left off.

Several of us were gathered up for the short bus ride to Oklahoma City, including this guy who assaulted me. Fortunately, he was kept separate. We arrived at the central transfer center for the B.O.P. + since there were only a few of us, it didn't take us long as usual to be processed.

After we were processed, I was put in a cell with one of the guys that came with me from El Reno. I had never spoken to the guy while at El Reno, but once in the cell, we started talking + he turned out to be nice. After we were locked down that night, he turned out to be Really Nice. I definitely wanted to stay longer, especially since the Transfer Center is a pretty laid-back place to be. I was SO PISSED when I was woken up at 1 AM or so that next morning to get on a place, "Con Air."

I was praying the whole time that I wouldn't end up in Atlanta. The time I went to Butner we flew directly there, so I thought I might be in luck since I was going farther north. No such luck. We made one stop in Jacksonville, FL + then it was Atlanta.

The transfer center in Atlanta, GA, sucks. It's run like you're in the Hole (Segregation) still—even though it's slightly better than it was years ago when I was stuck there for 5 weeks.

You're locked in a cell there all day except for a couple hours Mon-Fri when you're let out to shower, use the phone, or email. Otherwise, you're stuck— + all day on weekends. Plus, the prison is about 100 years old + it's filthy + usually you see mice (although I didn't this time).

Well, I was stuck there for a week. Until that Friday I was with a cellie who freaked me out a little, but I was alone after that.

So, on Oct. 20, I was woken up in the wee hours of the morning. I had hoped that I would be put on a plane, but once again my luck was out. A bunch of us were put on a bus for the long bus ride to Petersburg, Va.

Oh! I forgot that part in my narrative. While still at El Reno I was told that I would be going to the northeast region, which I was dreading. I had asked if I could be recommended to go to Petersburg because I heard it was a good spot. I found out in Oklahoma City that I was in fact going to Petersburg! I had to ask twice because I thought I had heard wrong. What a relief to find out that I was going there.

Okay, back to the bus. I think we finally left at 5:30 AM after a few hours being processed. Ironically we stopped at Butner on the way to Virginia + made stops at all the compounds there—from where I had left less than a year previously. That was strange.

So... here I am in Petersburg, VA. It really is the best place I've been to so far. There are flaws, of course, but this place is very laid back + there are tons of open gays, unlike El Reno. For once, I can be myself + not have to worry (too much) about how people will act. I am so much better off.

it is being a long time that I heard from you.I hope this means you are still fine.

On the 28th of January I got a fourth grandchild; his name is Lars.A little brother for Lynn, two yrs now.She turns 37 on the 13th of February. I am the godmother, as is the other grandmother, Simonne. :)
Her husband Jan is not doing well; his blood is not alright.Maybe he needs chemo therapy?
Tomorrow i am gonig to book my voyage to Amerika.My hotel is also reserved. At a 10 minutes walk from the prison where George is.
He knows by now. :) His dad told him, before he gets my letter.I will be picked up by his dad and his choffer John in the airport of Milwaukee.I have not to fly anymore with a cessna.

I April there was one day that I could'nt sleep in the hotel.. SO, I will have to go on the 22nd of June/July.
Can't go in May/June, since my brother Paul and his wife visit BE; we have a celebration for mom's 90th B-Day and my brother's 70 B-Day! 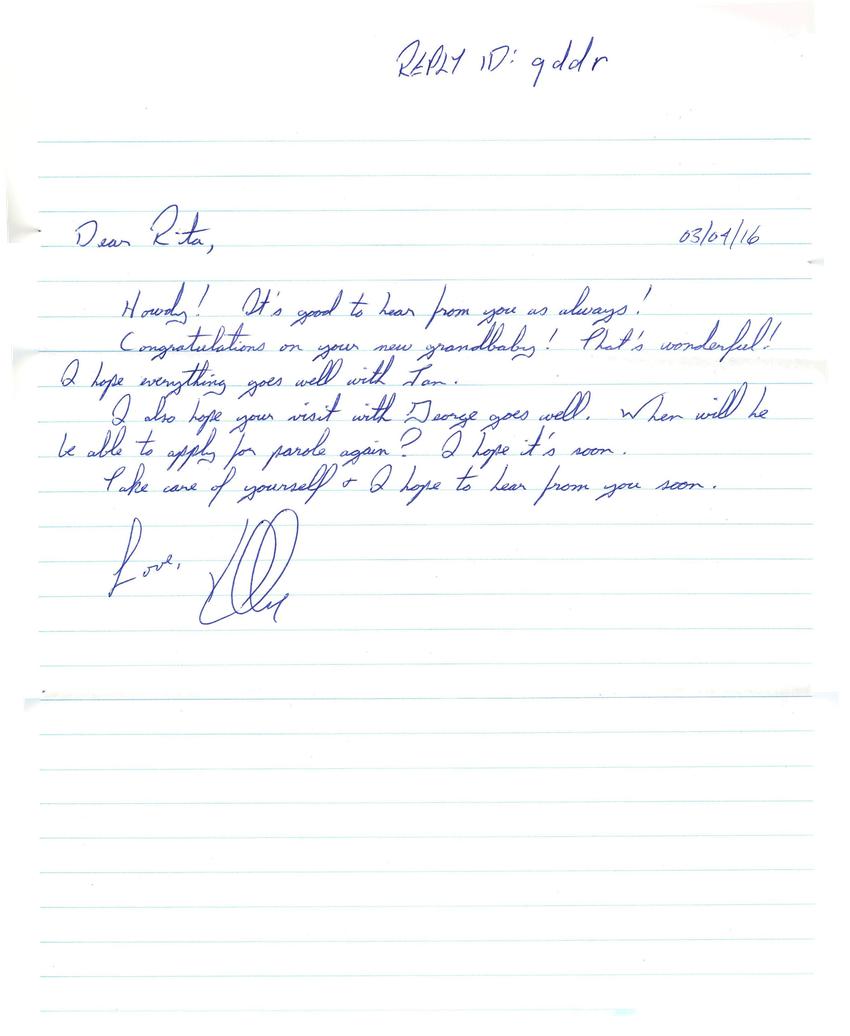 hey dear Kelly, I've missed you too!!I was wondering if you were alright in your new place?And how is it there?Better than the other place?I would like you to write your address of the new place, because I'm not real sure about it.
I see here you should have "this" answer on Monday,28 March.On the 26th I celebrate my B-Day at mom's and later with my block residents, my friends.:)
Johnny,a single resident celebrates his later, because a man of the block died.The husband of Marina,my age, married to Oswald, almost turned 80.He died in a home. He had an attack last yr; then he was placed in a home.He lost a lot of his mind-activity; she still was caring for him so very much!He ever was a famous hairdresser and rode on his b!cycle a lot!Well,he is not anymore...
I've gone to 5 funerals!Both parents of Christine,Leslie's mom in law, died too.Her dad was a doctor, he reached the age of 99 and his wife died 17 days before him, on Valentine Day.She was 93, but had Alzheimer.They were a fantastic couple!! Even their son Philip, Leslie's husband came from CA to greet his grandfather AND his grandmother!!Two separate flights!
This very morning, March 22, there was a big explosion on our airport Zaventem!!!And TWO explosions in two different metros!!Deads and wounded people!
A few days ago the big terrorist there in France!Salah Abdesalam was caught in a house in Brussels, in Molenbeek!
Our smell country is in fase 4 of alarm...

Mom lives in Brussels. And I will be in Vorst, BR for three nights in an hotel.:o :((
Right now I am following a course of poetry.Way ahead I am also following a 9 part course of painting: masks. My old love!:)
Yesterday I was babysitting on Lars; he seems a strong little boy, and he is quite a calm nature.ECCEPT when he is hungry, haha!

Take care Kelly, wish you the best!A big heartfelt hug from me!
Rita

Ps.I am writing with Henry on this blog too and he is a Wicca- he'll like to have a group in his prison and searches for a priest.He does yoga and is 60 of age.
No, I wrote her an email and furthermore she didn't respond on it anymore. She did once.
I can write her again though...
correction: our 'small' country ;))
Now to my Italian course.

We had the terrible explosion in our airport, Zaventem! By terrorists. Two of the terrorists died and one escaped. Also in a Metro we had many dead people!!Many serious wounded persons!
IS have such a hate... and fight our values, our democracy, our freedom.
After they caught Salah Abdeslam we think they feared he would speak!So they carried out earlier their crime act! Sooner or later it would happen anyway. :(((
My country mourns... I feel so sad for those innocent victims, Kelly. 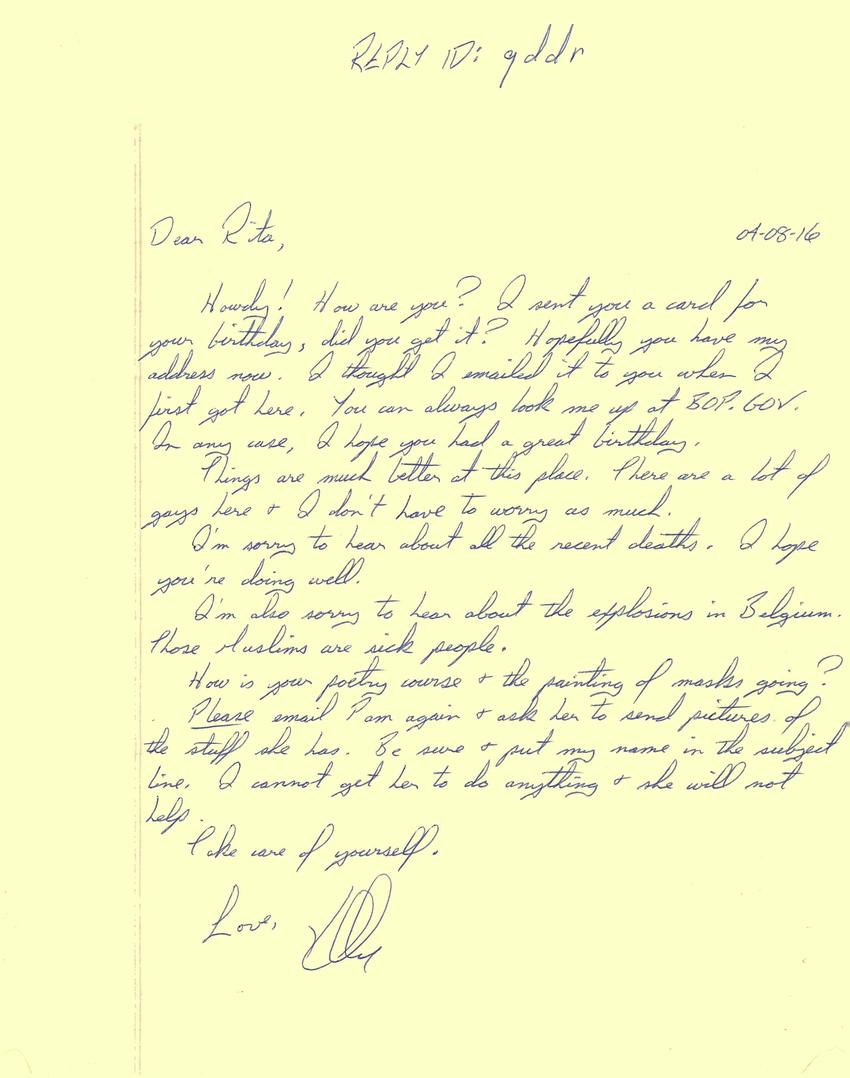