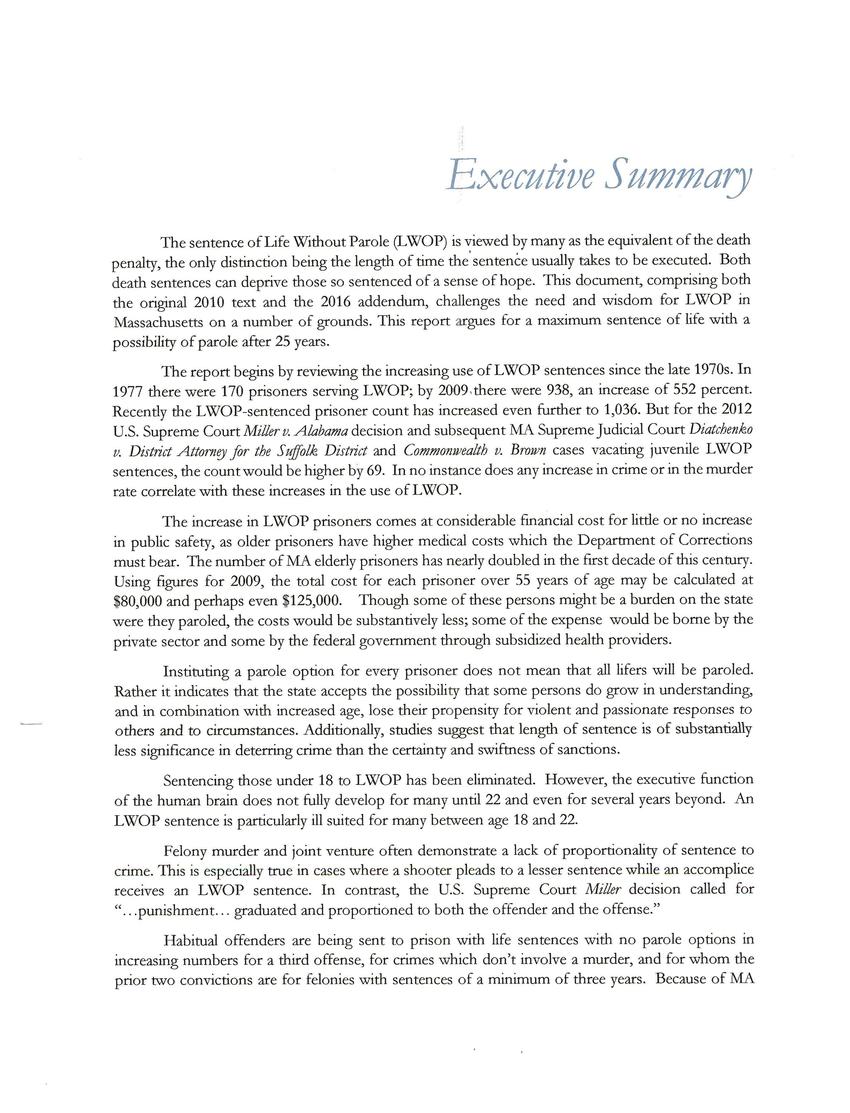 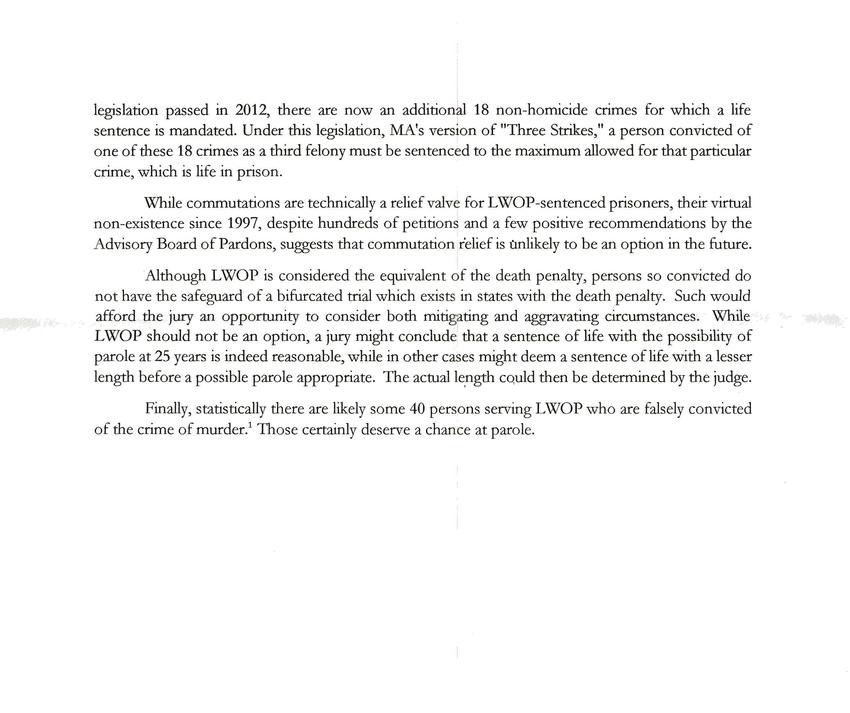 The sentence of Life Without Parole (LWOP) is viewed by many as the equivalent of the death penalty, the only distinction being the length of time the sentence usually takes to be executed. Both death sentences can deprive those so sentenced of a sense of hope. This document, comprising both the original 2010 text and the 2016 addendum, challenges the need and wisdom for LWOP in Massachusetts on a number of grounds. This report argues for a maximum sentence of life with a possibility of parole after 25 years.

The report begins by reviewing the increasing use of LWOP sentences since the late 1970s. In 1977 there were 170 prisoners serving LWOP; by 2009 there were 938, an increase of 552 percent. Recently the LWOP-sentenced prisoner count has increased even further to 1,036. But for the 2012 U.S. Supreme Court Miller v. Alabama decision and subsequent MA Supreme Judicial Court Diatchenko v. District Attorney for the Suffolk District and Commonwealth v. Brown cases vacating juvenile LWOP sentences, the court would be higher by 69. In no instance does any increase in crime or in the murder rate correlate with these increases in the use of LWOP.

The increase in LWOP prisoners comes at considerable financial cost for little to no increase in public safety, as older prisoners have higher medical costs which the Department of Corrections must bear. The number of MA elderly prisoners has nearly doubled in the first decade of this century. Using figures for 2009, the total cost for each prisoner over 55 years of age may be calculated at $80,000 and perhaps even $125,000. Though some of these persons might be a burden on the state were they paroled, the costs would be substantially less; some of the expense would be borne by the private sector and some by the federal government though subsidized health providers.

Instituting a parole option for every prisoner does not meat that all lifers will be paroled. Rather it indicates that the state accepts the possibility that some persons do grow in understanding, and in combination with increased age, lose their propensity for violent and passionate responses to others and to circumstances. Additionally, studies suggest that length of sentence is of substantially less significance in deterring crime than the certainty and swiftness of sanctions.

Sentencing those under 18 to LWOP has been eliminated. However, the executive function of the human brain does not fully develop for many until 22 and even for several years beyond. An LWOP sentence is particularly ill suited for many between age 18 and 22.

Felony murder and joint venture often demonstrate a lack of proportionality of sentence to crime. This is especially true in cases where a shooter pleads to a lesser sentence while an accomplice receives an LWOP sentence. In contrast, the U.S. Supreme Court Miller decision called for "...punishment... graduated and proportioned to both the offender and the offense."

Habitual offenders are being sent to prison with life sentences with no parole options in increasing numbers for a third offense, for crimes which don't involve a murder, and for whom the prior two convictions are for felonies with sentences of a minimum of three years. Because of MA legislation passed in 2012, these are now an additional 18 non-homicidal crimes for which a life sentence is mandated. Under this legislation, MA's version of "Three Strikes," a person convicted of one of these 18 crimes as a third felony must be sentenced to the maximum allowed for that particular crime, which is life in prison.

While commutations are technically a relief valve for LWOP-sentenced prisoners, their virtual non-existence since 1997, despite hundreds of petitions and a few positive recommendations by the Advisory Board of Pardons, suggests that commutation relief is unlikely to be an option in the future.

Although LWOP is considered the equivalent of the death penalty, persons so convicted do not have the safeguard of a bifurcated trial which exists in states with the death penalty. Such would afford the jury an opportunity to consider both mitigating and aggravating circumstances. While LWOP should not be an option, a jury might conclude that a sentence of life with the possibility of parole at 25 years is indeed reasonable, while in other cases might deem a sentence of life with a lesser length before a possible parole appropriate. The actual length could then be determined by the judge.

Finally, statistically there are likely some 40 persons serving LWOP who are falsely convicted of the crime of murder.1 Those certainly deserve a chance at parole.