Closing The Door On Rejection 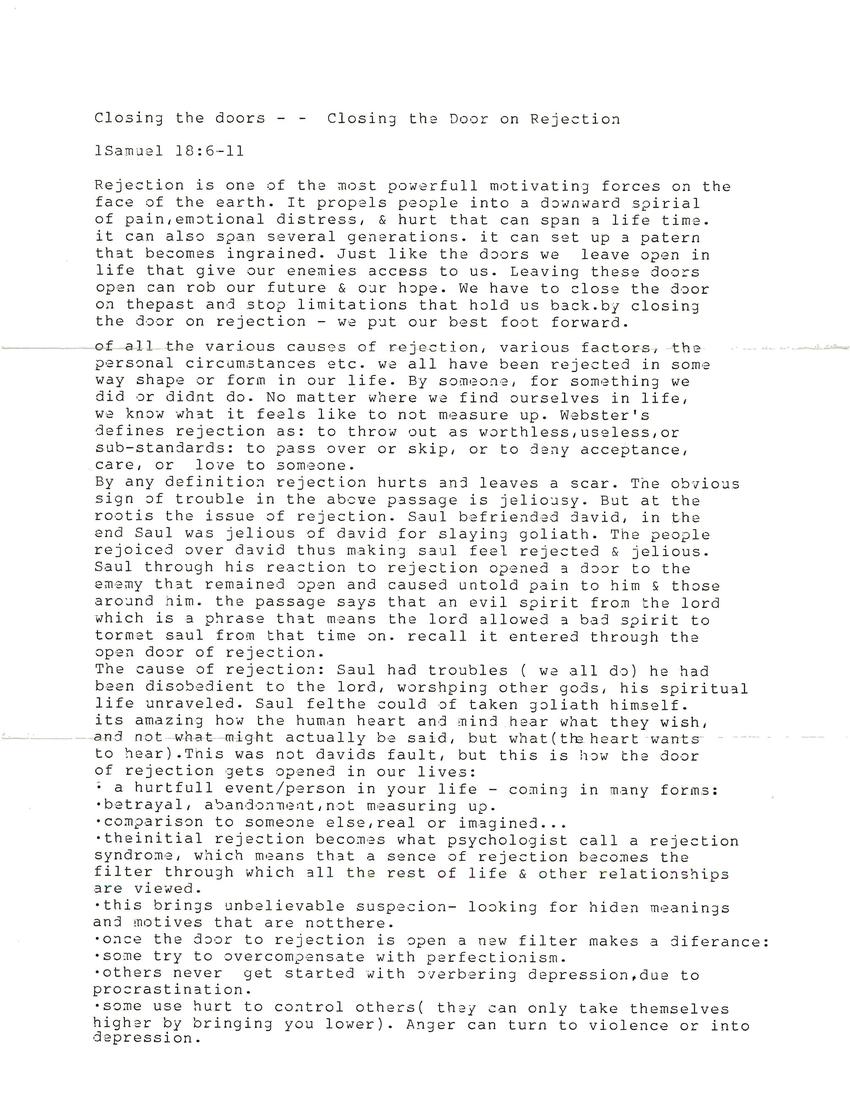 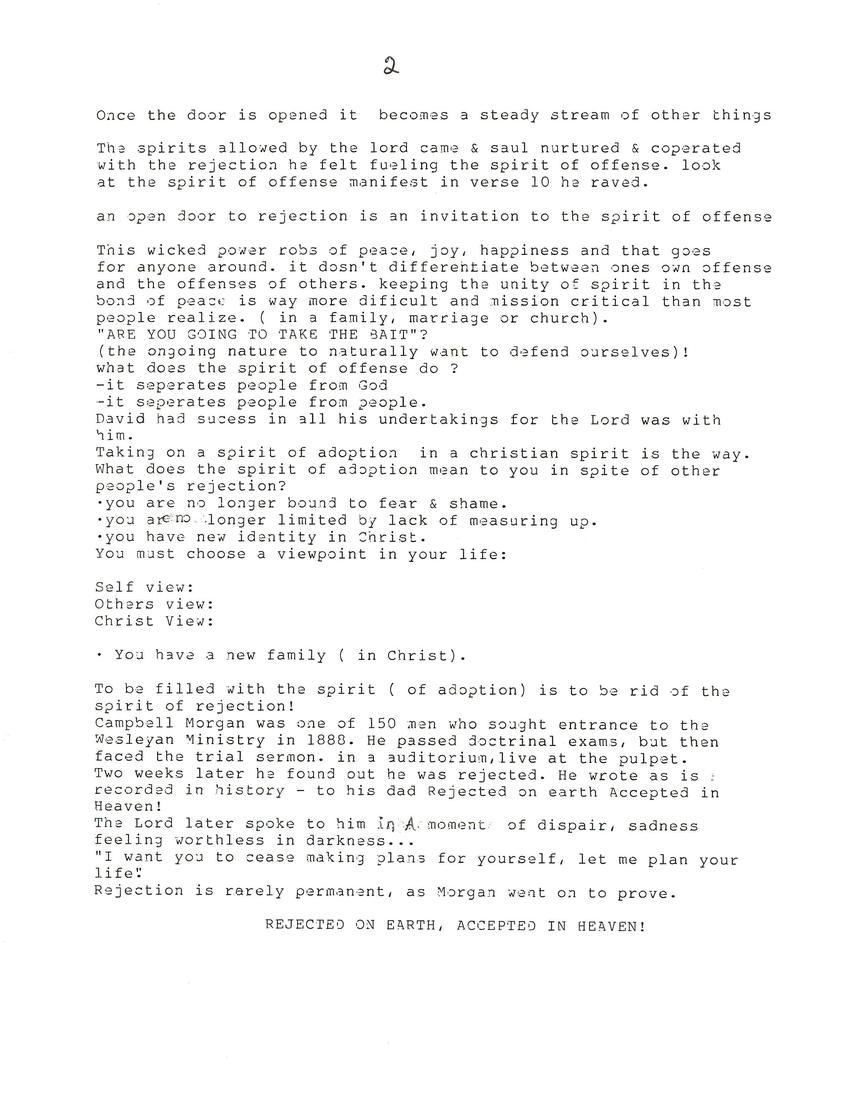 Rejection is one of the most powerful motivating forces on the face of the earth. It propels people into a downward spiral of pain, emotional distress, & hurt that can span a life time. It can also span several generations. It can set up a pattern that becomes ingrained. Just like the doors we leave open in life that give our enemies access to us. Leaving these doors open can rob our future & our hope. We have to close the door on the past and stop limitations that hold us back. By closing the door on rejection - we put our best foot forward.

Of all the various causes of rejection, various factors, the personal circumstances etc. well all have been rejected in some way shape or form in our life. By someone, for something we did or didn't do. No matter where we find ourselves in life, we know what it feels like to not measure up. Webster's defines rejection as: to throw out as worthless, useless, or sub-standards: to pass over or skip, or to deny acceptance, care, or love to someone.
By any definition rejection hurts and leaves a scar. The obvious sign of trouble in the above passage is jealously. But at the root is the issue of rejection. Saul befriended David, in the end Saul was jealous of David for slaying Goliath. The people rejoiced over David thus making Saul feel rejected & jealous. Saul through his reaction to rejection opened a door to the enemy that remained open and caused untold pain to him & those around him. The passage says that an evil spirit from the lord which is a phrase that means the lord allowed a bad spirit to torment Saul from that time on. Recall it entered through the open door of rejection.
The cause of rejection: Saul had troubles (we all do) he had been disobedient to the lord, worshipping other gods, his spiritual life unravelled. Saul felt he could of taken Goliath himself. It's amazing how the human heart and mind hear what they wish, and not what might actually be said, but what (the heart wants to hear). This was not David's fault, but this is how the door of rejection gets opened in our lives:
- a hurtful event/person in your life - coming in many forms:
- betrayal, abandonment, not measuring up.
- comparison to someone else, real or imagined...
- the initial rejection becomes what psychologist call a rejection syndrome, which means that a sense of rejection becomes the filter through which all the rest of life & other relationships are viewed.
- this brings unbelievable suspicion - looking for hidden meanings and motives that are not there.
- once the door to rejection is open a new filter makes a difference:
- some try to overcompensate with perfectionism.
- others never get started with overbearing depression, due to procrastination.
- some use hurt to control others (they can only take themselves higher by bringing you lower). Anger can turn to violence or into depression.

An open door to rejection is an invitation to the spirit of offense.

This wicked power robs of peace, joy, happiness and that goes for anyone around. It doesn't differentiate between ones own offense and the offenses of others. Keeping the unity of spirit in the bond of peace is way more difficult and mission critical than most people realize. (in a family, marriage or church).
"ARE YOU GOING TO TAKE THE BAIT"?
(the ongoing nature to naturally want to defend ourselves)!
What does the spirit of offense do?
- it separates people from God
- it separates people from people.
David had success in all his undertakings for the Lord was with him.
Taking on a spirit of adoption in a Christian spirit is the way.
What does the sprit of adoption mean to you in spite of other people's rejection?
- you are no longer bound to fear & shame.
- you are no longer limited by lack of measuring up.
- you have new identity in Christ.
You must choose a viewpoint in your life:

Self view:
Others view:
Christ View:

To be filled with the spirit (of adoption) is to be rid of the spirit of rejection!
Campbell Morgan was one of 150 men who sought entrance to the Wesleyan Ministry in 1888. He passed doctrinal exams, but then faced the trial sermon. In a auditorium, live at the pulpit. Two weeks later he found out he was rejected. He wrote as is recorded in history - to his dad rejected on earth accepted in Heaven!
The Lord later spoke to him in a moment of despair, sadness feeling worthless in darkness...
"I want you to cease making plans for yourself, let me plan your life."
Rejection is rarely permanent, as Morgan went on to prove.

REJECTED ON EARTH, ACCEPTED IN HEAVEN!

If god speaks to you then let him hear you. You are NOT rejected by all on earth. There are good people out there , that have compassion on both sides and are willing to hear you. Keep the faith
You are a new creation in Christ. Don't feel rejected. God never rejects us, we reject Him. I am a true believer in change. I have 654 days sober. After losing everyone and everything that I anything to me, I finally turned to Him. Stop listening to the voice in your head that tells you that you are not good enough, not loved, never gonna change. Your past is your past. Leave it there. I don't ever want to change my past, it made me who I am today. Keep your head up and keep talking to God!
(scanned reply – view as blog post)
uploaded April 8, 2019.  Original (PDF) 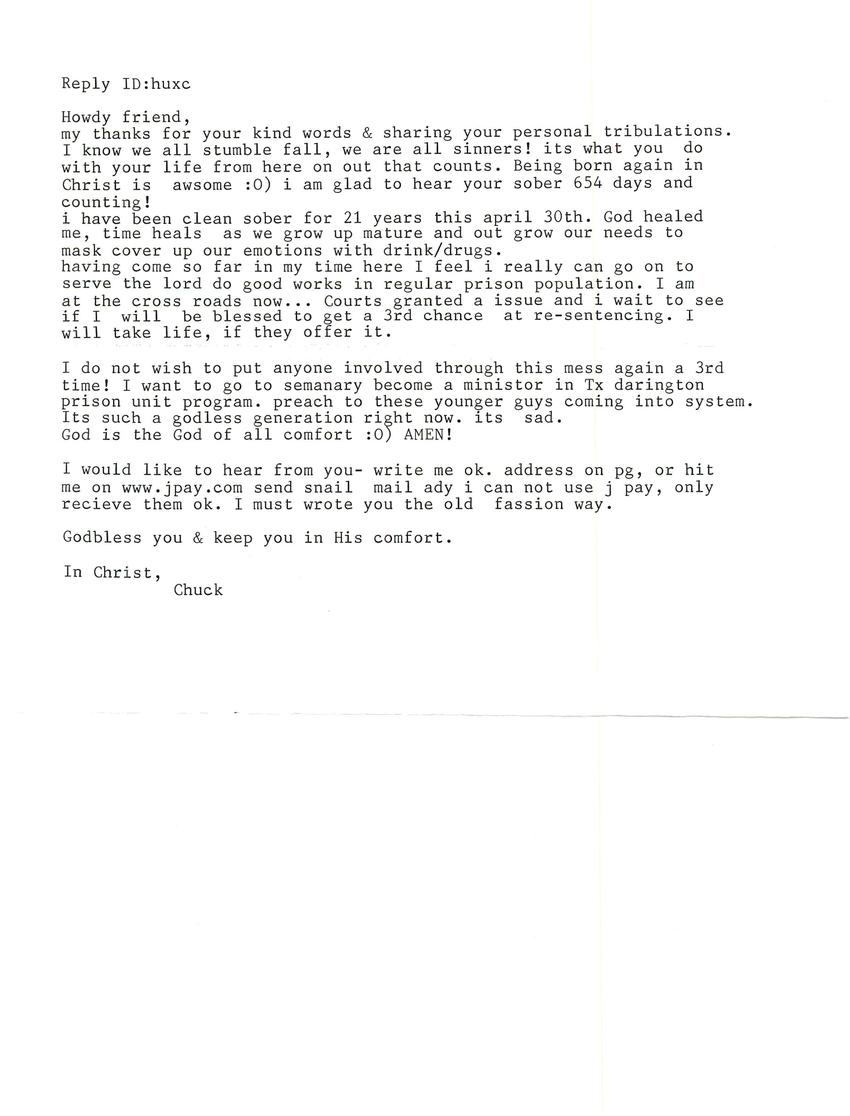 I just watched your case on the series, I am a Killer. Although I feel like you did commit murder by shooting Darren, I don’t feel like you deserved the death sentence for killing Dennise. I hope you get a retrial and hopefully get to live at least part of your life on the outside. Do you have a date set for your execution?

You’ll be in my thoughts and prayers.

Tina
I just watched Your story on the Netflix series: I am a killer and although You did kill Darren, I don't feel You deserved death, as like You said, the hospital killed Denise, so good luck and I hope you one day get offered a chance to come off death row and have a chance to get your sentence reduced to a life sentence!
Peace out and God bless You My brother!
Love your long distance brother from England: Kye