A Crash Course in Racial Disparities 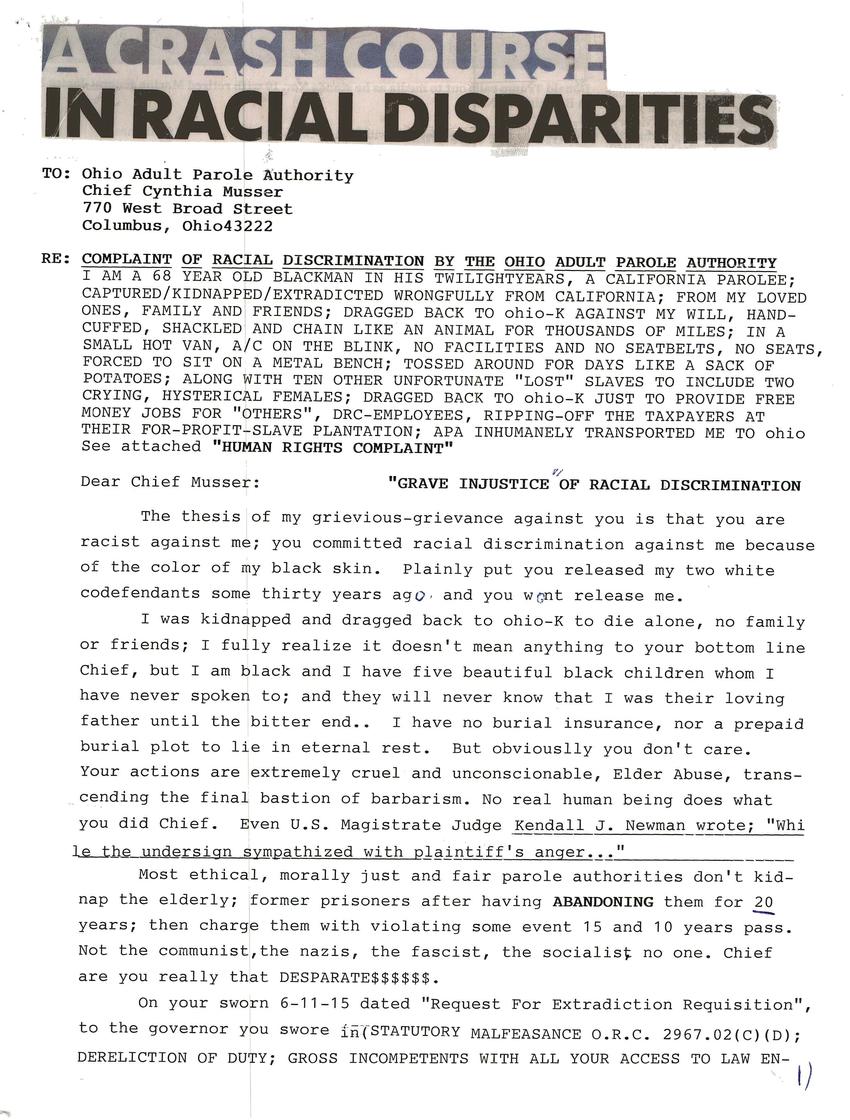 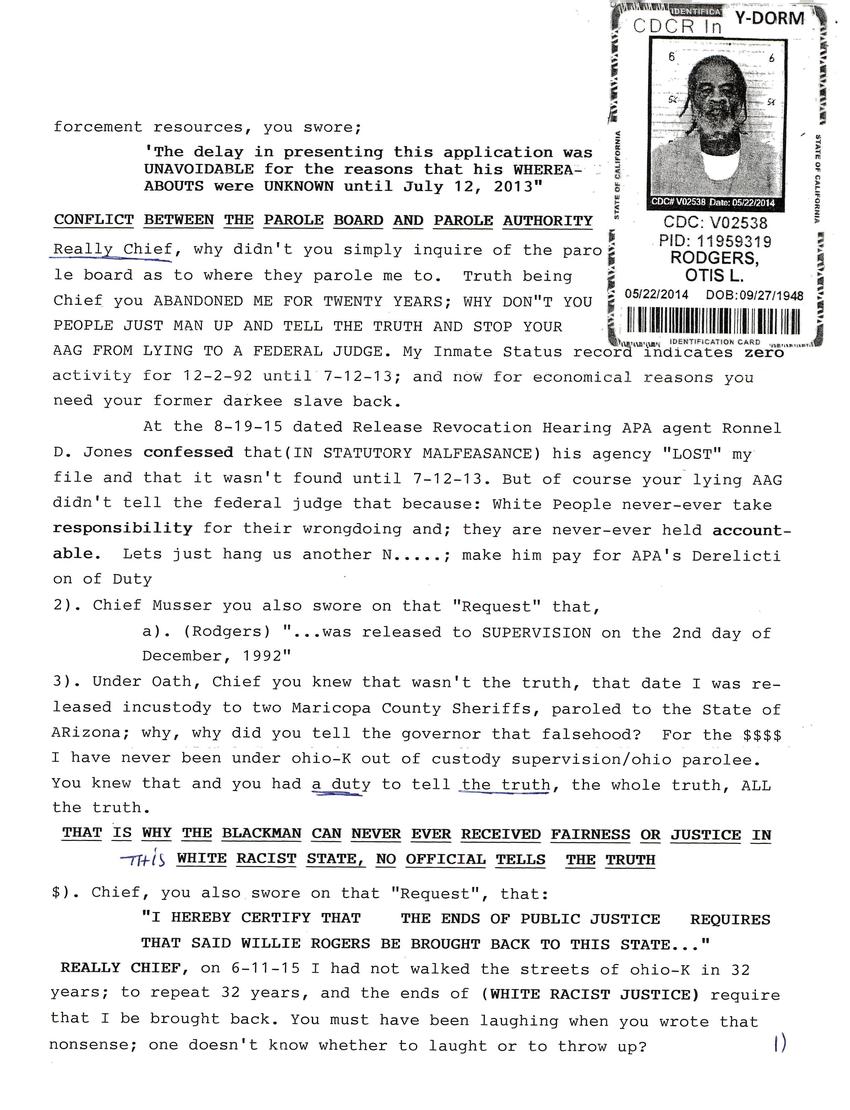 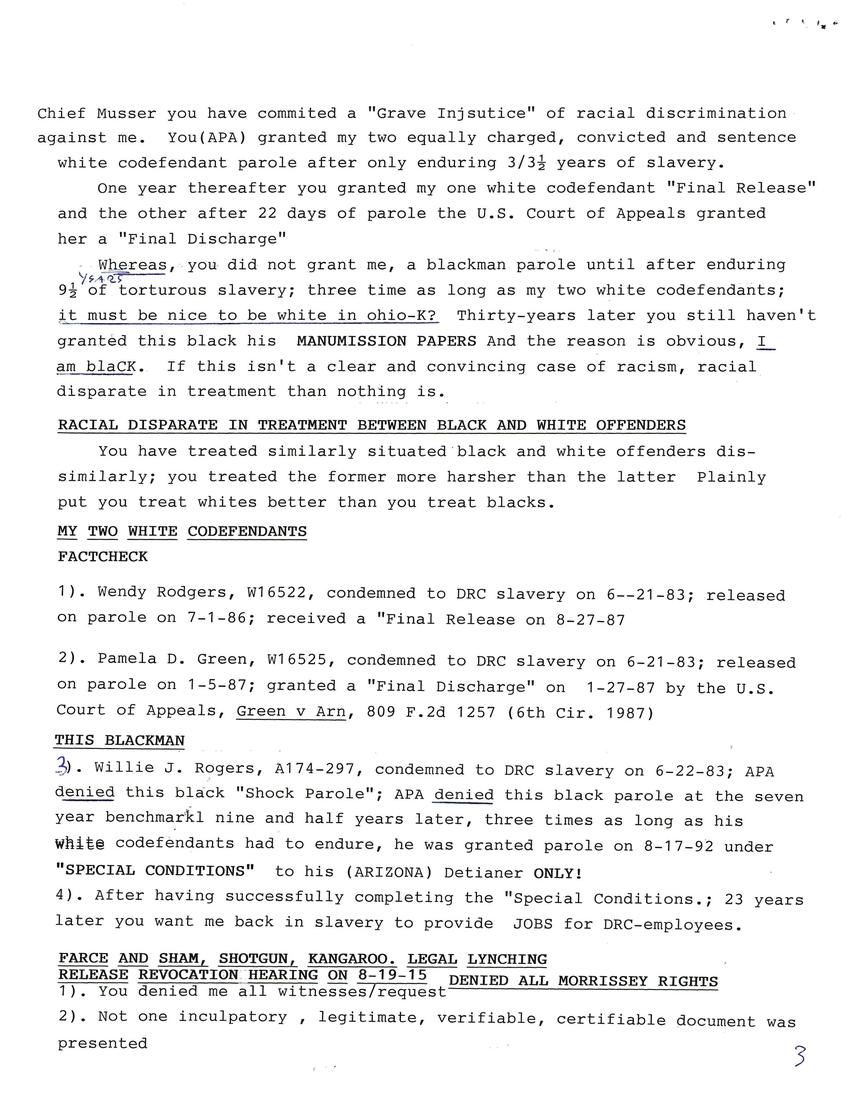 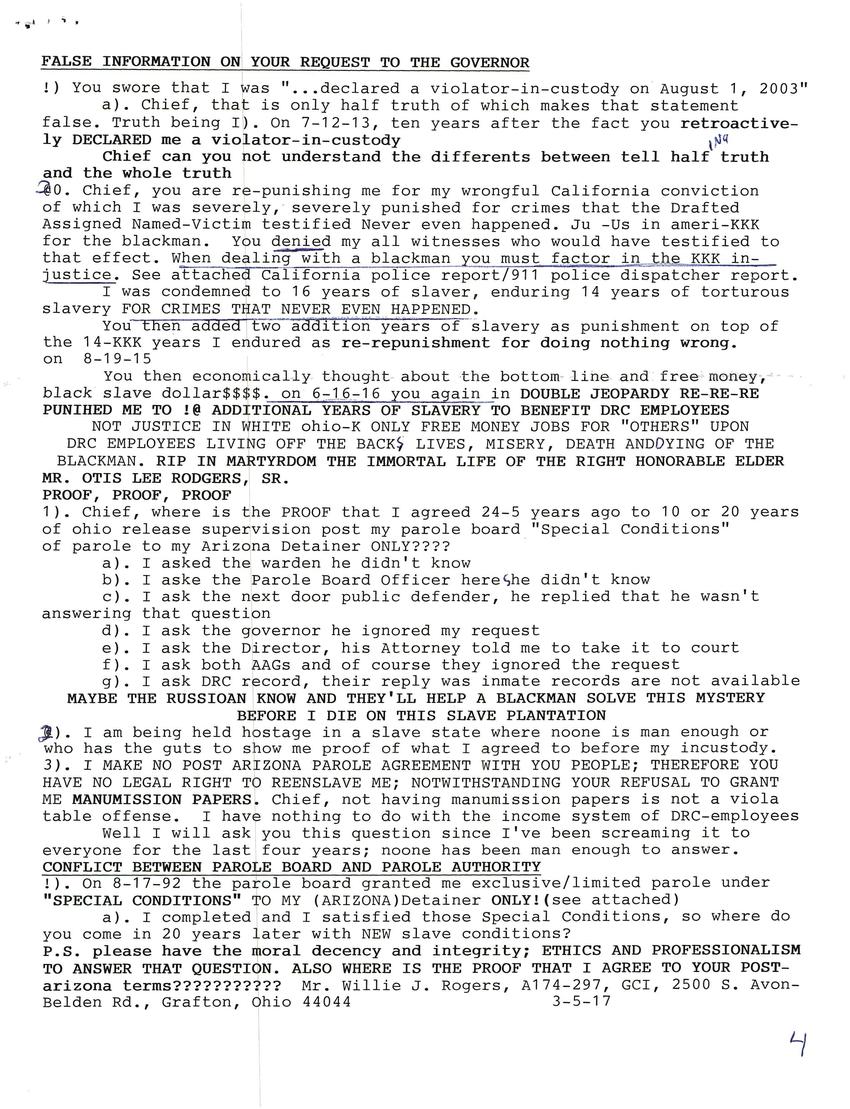 A CRASH COURSE
IN RACIAL DISPARITIES

RE: COMPLAINT OF RACIAL DISCRIMINATION BY THE OHIO ADULT PAROLE AUTHORITY
I AM A 68 YEAR OLD BLACKMAN IN HIS TWILIGHT YEARS, A CALIFORNIA PAROLEE; CAPTURED/KIDNAPPED/EXTRADICTED WRONGFULLY FROM CALIFORNIA; FROM MY LOVED ONES, FAMILY AND FRIENDS; DRAGGED BACK TO ohio-K AGAINST MY WILL, HANDCUFFED, SHACKLED AND CHAIN LIKE AN ANIMAL FOR THOUSANDS OF MILES; IN A SMALL HOT VAN, A/C ON THE BLINK, NO FACILITIES AND NO SEATBELTS, NO SEATS, FORCED TO SIT ON A METAL BENCH; TOSSED AROUND FOR DAYS LIKE A SACK OF POTATOES; ALONG WITH TEN OTHER UNFORTUNATE "LOST" SLAVES TO INCLUDE TWO CRYINF, HYSTERICAL FEMALES; DRAGGED BACK TO ohio-K JUST TO PROVIDE FREE MONEY JOBS FOR "OTHERS", DRC-EMPLOYEES, RIPPING-OFF THE TAXPAYERS AT THEIR FOR-PROFIT-SLAVE PLANTATION; APA INHUMANELY TRANSPORTED ME TO ohio
See attached "HUMAN RIGHTS COMPLAINT"

The thesis of my grievous-grievance against you is that you are racist against me; you committed racial discrimination against me because of the color of my black skin. Plainly put you released my two white co-defendants some thirty years ago and you won't release me.
I was kidnapped and dragged back to ohio-K to die alone, no family or friends; I fully realize it doesn't mean anything to your bottom line Chief, but I am black and I have five beautiful black children whom I have never spoken to; and they will never know that I was their loving father until the bitter end... I have no burial insurance, nor a prepaid burial plot to lie in eternal rest. But obviously you don't care. Your actions are extremely cruel and unconscionable, Elder Abuse, transcending the final bastion of barbarism. No real human being does what you did Chief. Even U.S. Magistrate Judge Kendall J. Newman wrote; "While the undersign sympathized with plaintiff's anger..."
Most ethical, morally just and fair parole authorities don't kidnap the elderly; former prisoners after having ABANDONING them for 20 years; then charge them with violating some event 15 or 10 years pass. Not the communist, the Nazis, the fascist, the socialist, no one. Chief are you really that DESPARATE$$$$$$.
On your sworn 6-11-15 dated "Request For Extradiction Requisition", to the governor you swore in (STATUTORY MALFEASANCE O.R.C. 2967.02(C)(D); DERELICTION OF DUTY; GROSS INCOMPETENTS WITH ALL YOUR ACCESS TO LAW ENFORCEMENT resources, you swore;
'The delay in presenting this application was UNAVOIDABLE for the reasons that his WHEREABOUTS were UNKNOWN until July 12, 2013"

CONFLICT BETWEEN THE PAROLE BOARD AND PAROLE AUTHORITY

Really Chief, why didn't you simply inquire of the parole board as to where they parole me to. Truth being Chief you ABANDONED ME FOR TWENTY YEARS; WHY DON'T YOU PEOPLE JUST MAN UP AND TELL THE TRUTH AND STOP YOUR AAG FROM LYING TO A FEDERAL JUDGE. My Inmate Status record indicates zero activity for 12-2-92 until 7-12-13; and now for economical reasons you need you former darkee slave back.
At the 8-19-15 dates Release Revocation Hearing APA agent Ronnel D. Jones confessed that (IN STATUTORY MALFEASANCE) his agency "LOST" my file and that it wasn't found until 7-12-13. But of course your lying AAG didn't tell the federal judge that because: White People never-ever take responsibility for their wrongdoing and; they are never-ever held accountable. Lets just hang us another N.....; make him pay for APA's Dereliction of Duty
2). Chief Musser you also swore on that "Request" that,
a). (Rodgers) "...was released to SUPERVISION on the 2nd day of December, 1992"
3). Under Oath, Chief you knew that wasn't the truth, that date I was release in custody to two Maricopa County Sheriffs, paroled to the State of Arizona; why, why did you tell the governor that falsehood? For the $$$$ I have never been under ohio-K out of custody supervision/ohio parolee. You knew that and you had a duty to tell the truth, the whole truth, ALL the truth.
THAT IS WHY THE BLACKMAN CAN NEVER EVER RECIEVED FAIRNESS OR JUSTICE IN THIS WHITE RACIST STATE, NO OFFICIAL TELLS THE TRUTH
$). Chief, you also swore on that "Request", that:
"I HEREBY CERTIFY THAT THE ENDS OF PUBLIC JUSTICE REQUIRES THAT SAID WILLIE ROGERS BE BROUGHT BACK TO THIS STATE..."
REALLY CHIEF, on 6-11-15 I had not walked the streets of ohio-K in 32 years; to repeat 32 years, and the ends of (WHITE RACIST JUSTICE) require that I be brought back. You must have been laughing when you wrote that nonsense; one doesn't know whether to laugh or to throw up?

Chief Musser you have committed a "Grave Injustice" of racial discrimination against me. You(APA) granted my two equally charged, convicted and sentence white co-defendant parole after only enduring 3 / 3 1/2 years of slavery.
One year thereafter you granted my one white co-defendant "Final Release" and the other after 22 days of parole the U.S. Court of Appeals granted her a "Final Discharge"
Whereas, you did not grant me, a black man parole until after enduring 9 1/2 years of torturous slavery; three time as long as my two white co-defendants; it must be nice to be white in ohio-K? Thirty-years later you still haven't granted this black his MANUMISSION PAPERS And the reason is obvious, I am black. If this isn't a clear and convincing case of racism, racial disparate in treatment than nothing is.

RACIAL DISPARATE IN TREATMENT BETWEEN BLACK AND WHITE OFFENDERS
You have treated similarly situated black and white offenders dis-similarly; you treated the former more harsher that the latter Plainly put you treat whites better than you treat blacks.

THIS BLACKMAN
3). Willie J. Rogers, A174-297, condemned to DRC slavery on 6-22-83; APA denied this black "Shock Parole"; APA denied this black parole at the seven year benchmark nine and half years later, three times as long ass his white co-defendants had to endure, he was granted parole on 8-17-92 under "SPECIAL CONDITION" to his (ARIZONA) Detainer ONLY!
4). After having successfully completing the "Special Conditions.; 23 years later you want me back in slavery to provide JOBS for DRC-employees.

FARCE AND SHAM, SHOTGUN, KANGAROO. LEGAL LYNCHING
RELEASE REVOCATION HEARING ON 8-19-15 DENIED ALL MORRISSEY RIGHTS
1). You denied me all witnesses/request
2). Not one inculpatory, legitimate, verifiable, certifiable document was presented

FALSE INFORMATION ON YOUR REQUEST TO THE GOVERNOR
!) You swore that I was "...declared a violator-in-custody on August 1, 2003"
a). Chief, that is only half truth of which makes that statement false. Truth being I). On 7-12-13, ten years after the fact you retroactively DECLARED me a violator-in-custody
Chief can you not understand the difference between tell half truth and the whole truth
0. Chief, you are re-punishing me for my wrongful California conviction of which I was severely, severely punished for crimes that the Drafter Assigned Named-Victim testified Never even happened. Ju -Us in ameri-KKK for the black man. You denied my all witnesses who would have testified to that effect. When dealing with a black man you must factor in the KKK injustice. See attached California police report/911 police dispatcher report.
I was condemned to 16 years of slavery, enduring 14 years of torturous slavery FOR CRIMES THAT NEVER EVEN HAPPENED.
You then added two additional years of slavery as punishment on top of the 14-KKK years I endured as re-repunishment for doing nothing wrong. on 8-19-15
You then economically thought about the bottom line and free money, black slave dollar$$$$. on 6-16-16 you again in DOUBLE JEOPARDY RE-RE-REPUNISHED ME TO !@ ADDITIONAL YEARS OF SLAVERY TO BENEFIT DRC EMPLOYEES
NOT JUSTICE IN WHITE ohio-K ONLY FREE MONEY JOBS FOR "OTHERS" UPON DRC EMPLOYEES LIVING OFF THE BACKS, LIVES, MISERY, DEATH AND DYING OF THE BLACK MAN. RIP IN MARTYRDOM THE IMMORTAL LIFE OF THE RIGHT HONORABLE ELDER MR. OTIS LEE RODGERS, SR.
PROOF, PROOF, PROOF
1). Chief, where is the PROOF that I agreed 24-5 years ago to 10 or 20 years of ohio release supervision post my parole board "Special Conditions" of parole to my Arizona Detainer ONLY????
a). I asked the warden he didn't know
b). I asked the Parole Board Officer here she didn't know
c). I ask the next door public defender, he replied that he wasn't answering that question
d). I ask the governor he ignored my request
e). I ask the Director, his Attorney told me to take it to court
f). I ask both AAGs and of course they ignored the request
g). I ask DRC record, their reply was inmate records are not available
MAYBE THE RUSSIAN KNOW AND THEY'LL HELP A BLACK MAN SOLVE THIS MYSTERY BEFORE I DIE ON THIS SLAVE PLANTATION
2). I am being held hostage in a slave state where no one is man enough or who has the guts to show me proof of what I agreed to before my in custody.
3). I MAKE NO POST ARIZONA PAROLE AGREEMENT WITH YOU PEOPLE; THEREFORE YOU HAVE NO LEGAL RIGHT TO REENSLAVE ME; NOTWITHSTANDING YOUR REFUSAL TO GRANT ME MANUMISSION PAPERS. Chief, not having manumission papers is not a viola table offense. I have nothing to do with the income system of DRC-employees
Well I will ask you this question since I've been screaming it to everyone for the last four years; no one has been man enough to answer.

CONFLICT BETWEEN PAROLE BOARD AND PAROLE AUTHORITY

!). On 8-17-92 the parole board granted me exclusive/limited parole under "SPECIAL CONDITIONS" TO MY (ARIZONA) Detainer ONLY! (see attached)
a). I completed and I satisfied those Special Conditions, so where do you come in 20 years later with NEW slave conditions?
P.S. please have the moral decency and integrity; ETHICS AND PROFESSIONALISM TO ANSWER THAT QUESTION. ALSO WHERE IS THE PROOF THAT I AGREE TO YOUR POST-Arizona terms??????????? Mr. Willie J. Rogers, A174-297, GCI, 2500 S. Avon-Belden Rd., Grafton, Ohio 44044
3-5-17