Whole Situation Changed On This Date 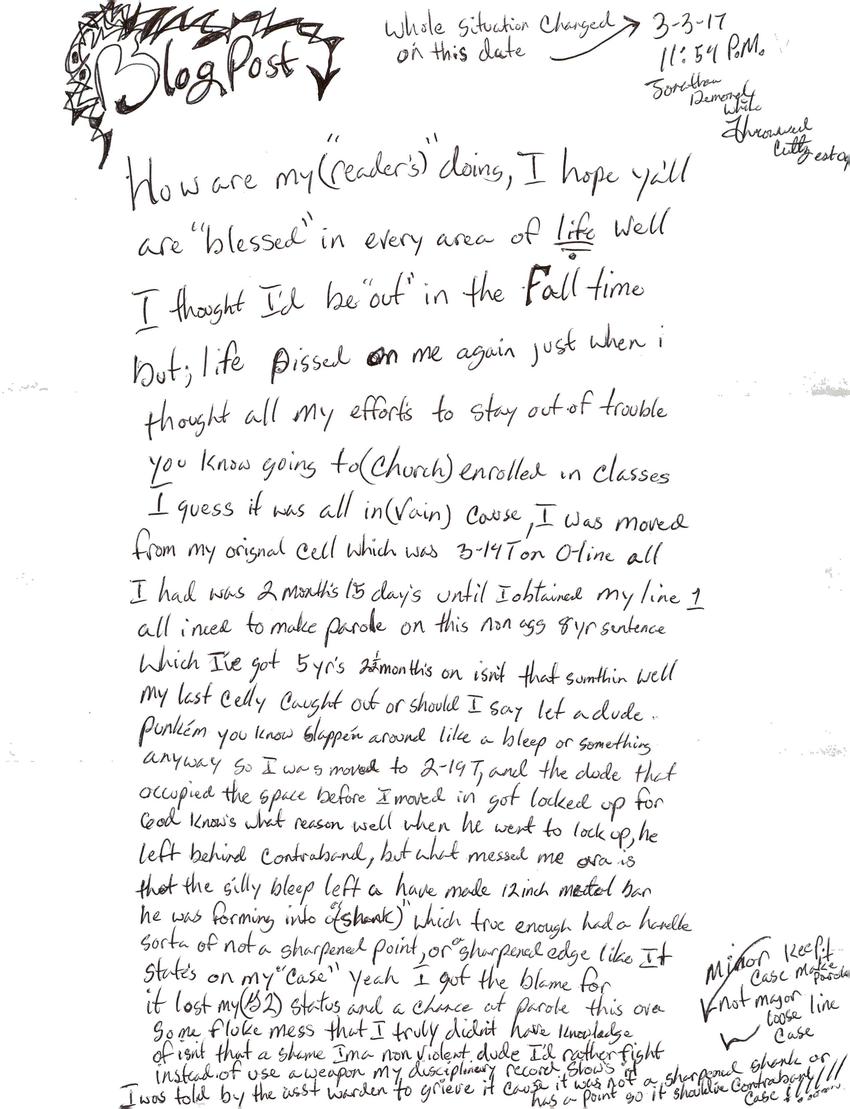 How are my readers doing? I hope y'all are blessed in every area of life.

Well, I thought I'd be out in the fall time, but life pissed on me again. Just when I thought all my efforts to stay out of trouble. You know, going to church, enrolled in classes. I guess it was all in vain 'cause I was moved from my original cell which was 3-14 T on O-line. All I had was two months, 15 days until I obtained my line 1. All I need to make parole on this non-aggressive eight year sentence, which I've got five years and two and a half months on—isn't that something—.

Well, my last celly caught out or should I say let a dude punch 'em. You know, slappin' around like a bleep or something. Anyway, so I was moved to 2-19 T and the dude that occupied the space before I moved in got locked up for God knows what reason. Well, when he went to lock up, he left behind contraband. But what's messed me over is that the silly bleep left a half made 12" metal bar. He was forming it in to a shank which true enough had a handle. Sort of not a sharpened point or sharpened edge-like. It's stated on my case.

Yeah, I got blamed for it, lost my J2 status and a chance for parole over some fluke's mess that I truly didn't have any knowledge of. Isn't that a shame? I'm a non-violent dude. I'd rather fight instead of use a weapon (minor cases can make parole, not mayor, loose-line cases). My disciplinary record shows it. I was told by the west warden to grieve it 'cause it was not a sharpened shank or have a point. It shouldn't be a contraband case!

Wow...the devil is always busy and it seems like no matter how hard you try it's always something there to hold you back. I'm a little familiar with the prison system because my husband is incarcerated but I don't know how it works in Texas because the laws and everything is different but you should've definitely been able to fight that if it wasn't found in your area and you haven't been in trouble for cases of such like that before. Keep your head up because there are brighter days ahead my friend!