The Life and Times of Guy Stephen Alexander, born August 20, 1959 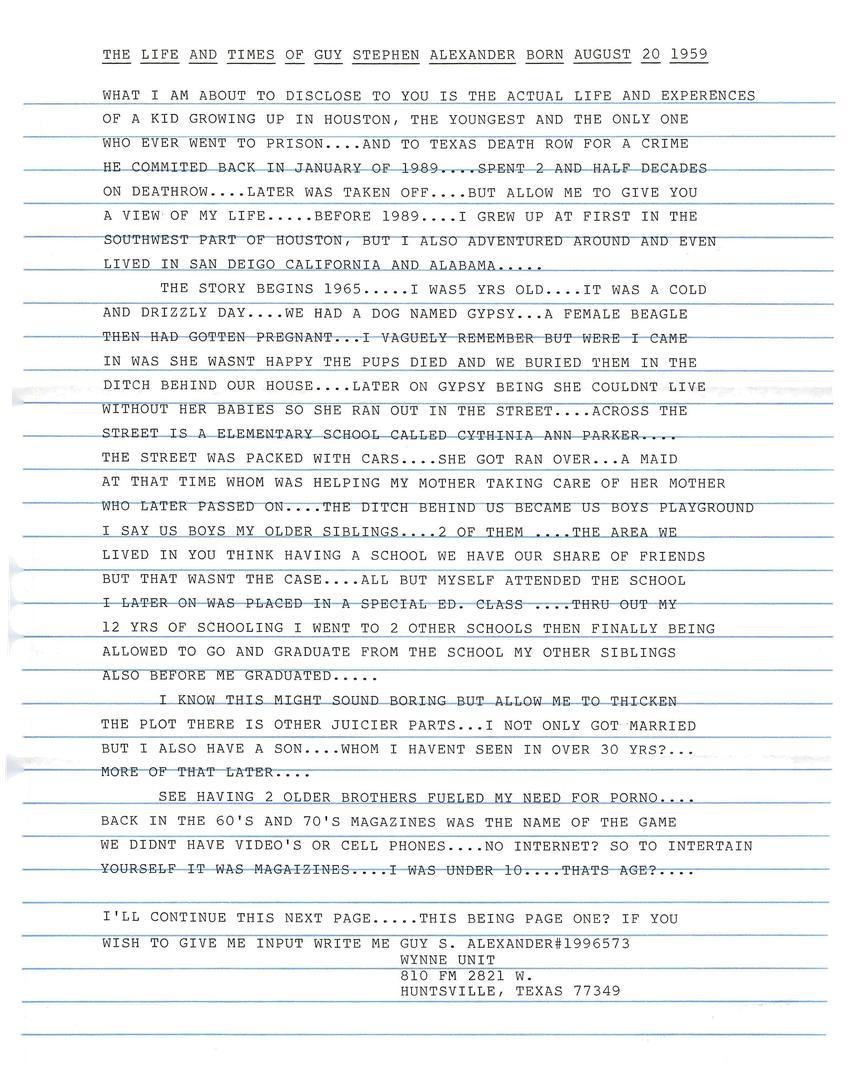 The Life and Times of Guy Stephen Alexander: Born August 20, 1959

What I am about to disclose to you is the actual life and experiences of a kid growing up in Houston, the youngest and the only one who ever went to prison and to Texas death row for a crime he committed back in January of 1989. Spent 2 and a half decades on death row, later was taken off. But allow me to give you a view of my life before 1989.

I grew up at first in the southwest part of Houston, but I also ventured around and even lived in San Diego, California, and Alabama.

The story begins 1965. I was 5 years old. It was a cold and drizzly day. We had a dog named Gypsy, a female beagle that had gotten pregnant. I vaguely remember, but where I came in was when she wasn't happy. The pups died and we buried them in the ditch behind our house. Later on, Gypsy couldn't live without her babies so she ran out into the street. Across the street is an elementary school called Cynthia Ann Parker. The street was packed with cars. She got ran over.

A maid at that time, whom was helping my mother take care of her mother who later passed on. The ditch behind us became us boys' playground. I say us boys: my older brothers, 2 of them. The area we lived in, you'd think having a school that we'd have our share of friends. But that wasn't the case. All but myself attended the school. I later on was placed into a special ed. class. Throughout my 12 years of schooling, I went to 2 other schools before finally being allowed to go and graduate from the school my other siblings before me graduated.

I know this might sound boring, but allow me to thicken the plot. There are other juicier parts. I not only got married, but I also have a son whom I haven't seen in over 30 years. More on that later.

I'll continue this next page, this being page one. If you wish to give me input, write me:

That is a sad first memory- learning of the death of a litter of puppies and then having your dog hit by a car. I'm sorry to hear that you had to deal with such adult issues at such a young age. -sbz
Guy, I tried to email you a couple of years ago but I don't think it ever went thru. I was a stranger who attended your trial back when I was in college (prior to going to law school). I remember meeting your lawyers, the Prosecutors and the Judge. I attended every day of your trial including the sentencing phase. I attended the trial with my girlfriend/fiancee...we later married and attended law school but divorced in 1995 before we graduated law school. I practiced law approximately 10 years before going into business... but came out of legal retirement and defended a murder charge in New Mexico about 5 years ago. I won an acquittal in fact- my one and only criminal trial. Over the decades I would look up your case and was surprised when you were taken off death row. I read the opinion and could definitely remember the lack of defense your attorneys put up in both phases.

I'm not sure what I'm expecting by writing you but just thought I'd reach out and see how you were. It's truly amazing to think that 3 decades have passed. I was 21 at the time of your trial and today I'm 51. I can not imagine how your life has been these years. I would be interested in hearing what your life has been like. I'll wait to see how this message goes before writing more.
(scanned reply – view as blog post)
uploaded Feb. 27, 2022.  Original (PDF) 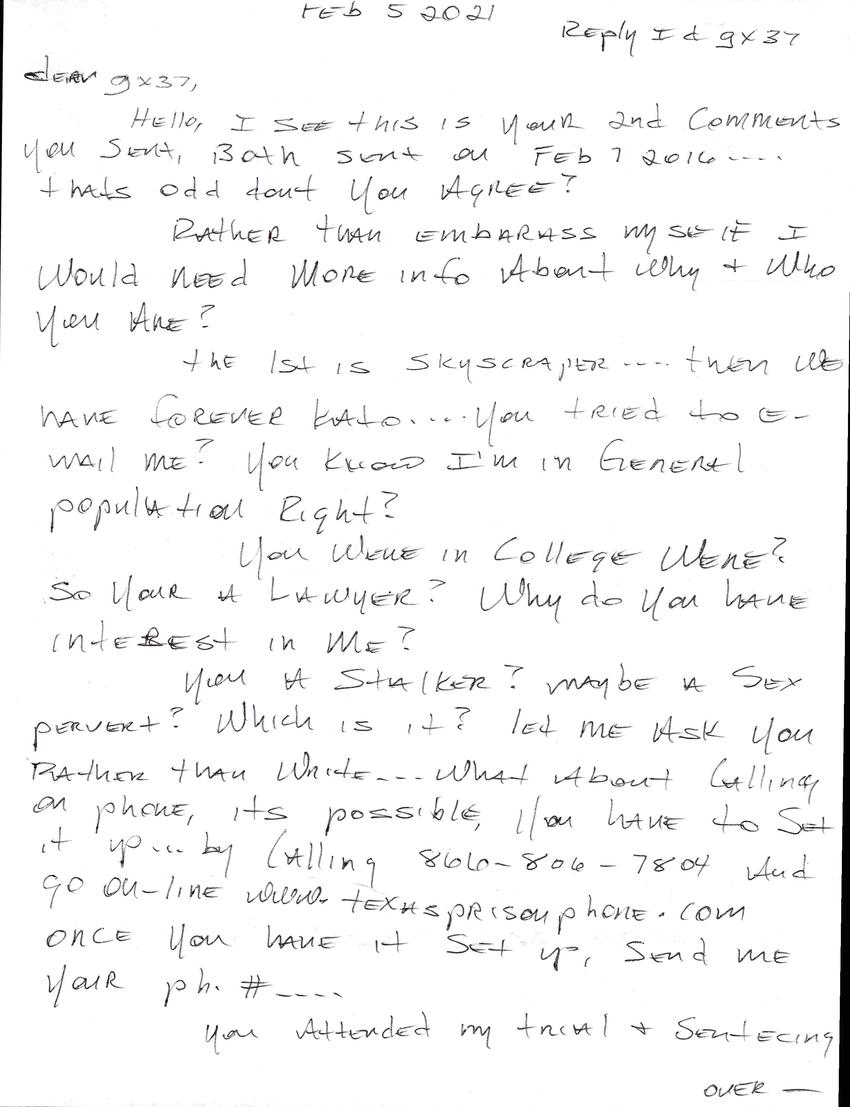 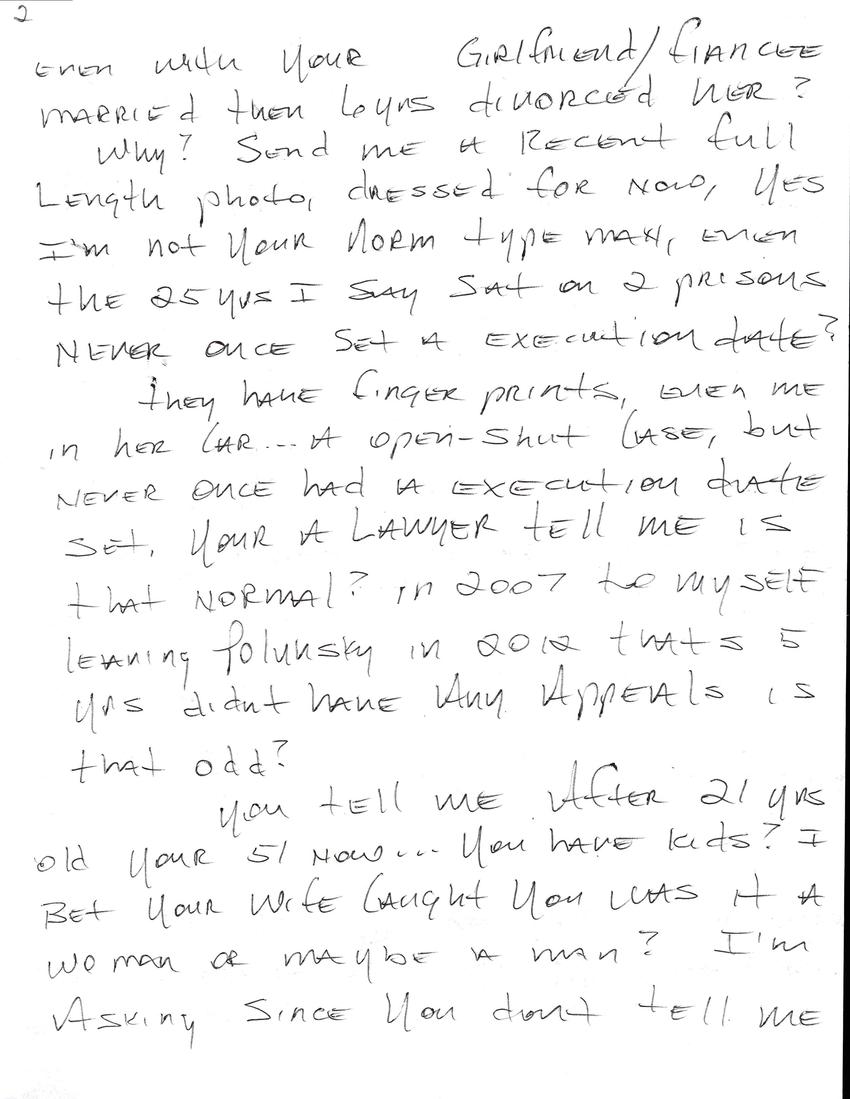 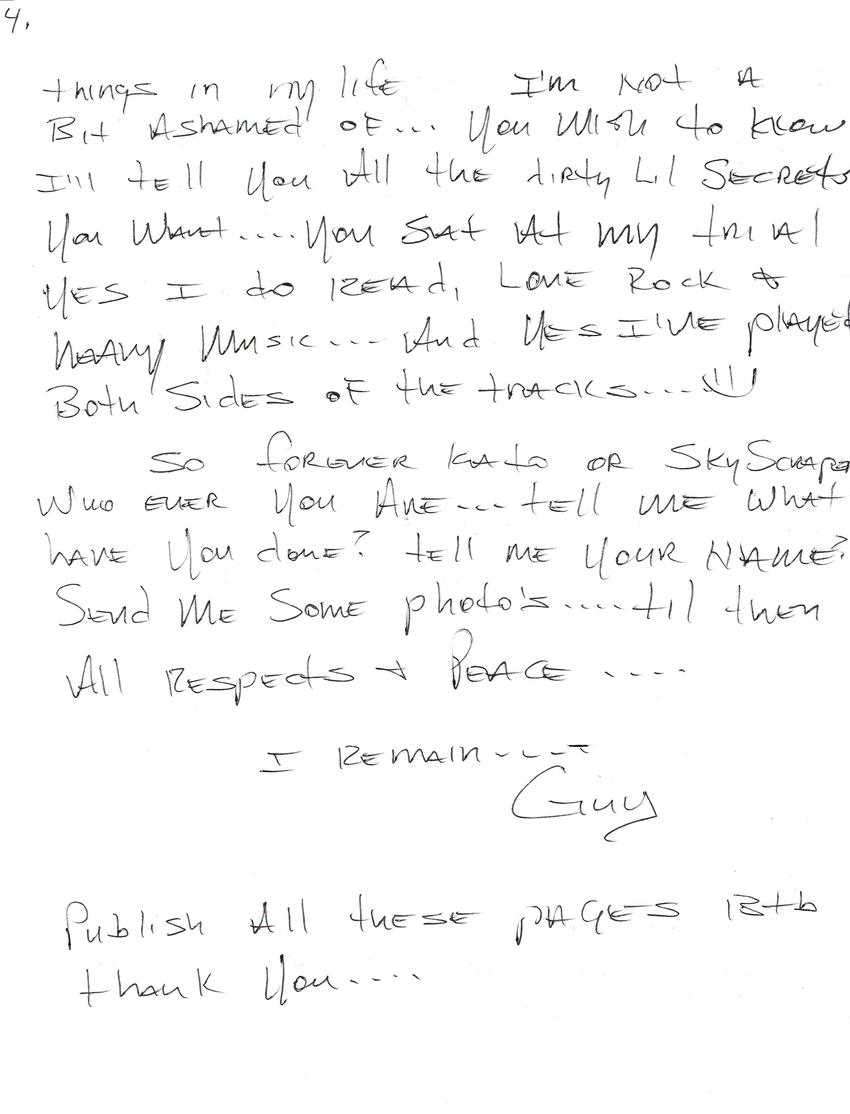 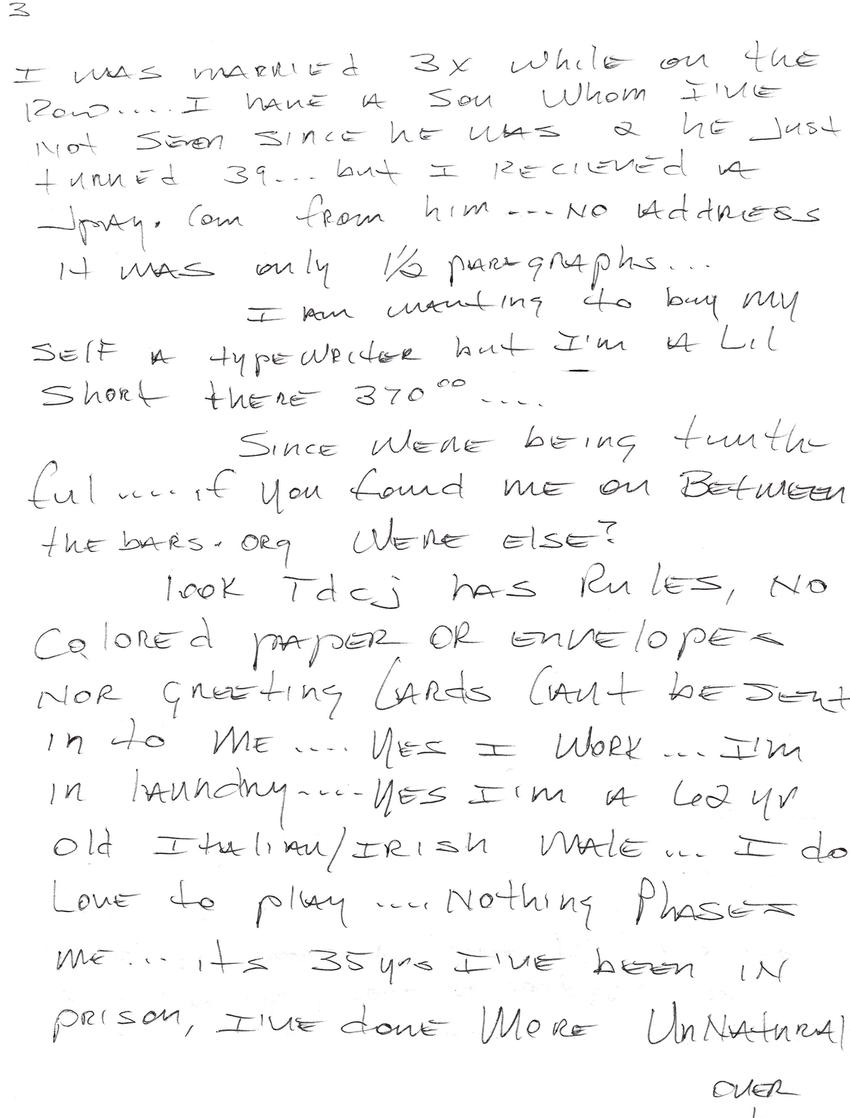 Guy, Its forever_kato... I just read one of the comments on this site from "skyscraper" ...thats definitely was NOT me. I was assuming you had a letter from me from a couple of years ago and I had written the same thing and used the name skyscraper and had forgotten. In fact, that was not me who used the name skyscraper....you would have to ask them who they are. I noticed they commented about how sad your story was... it did not sound anything like me at all. Anyway I just wanted to clear that up for you. 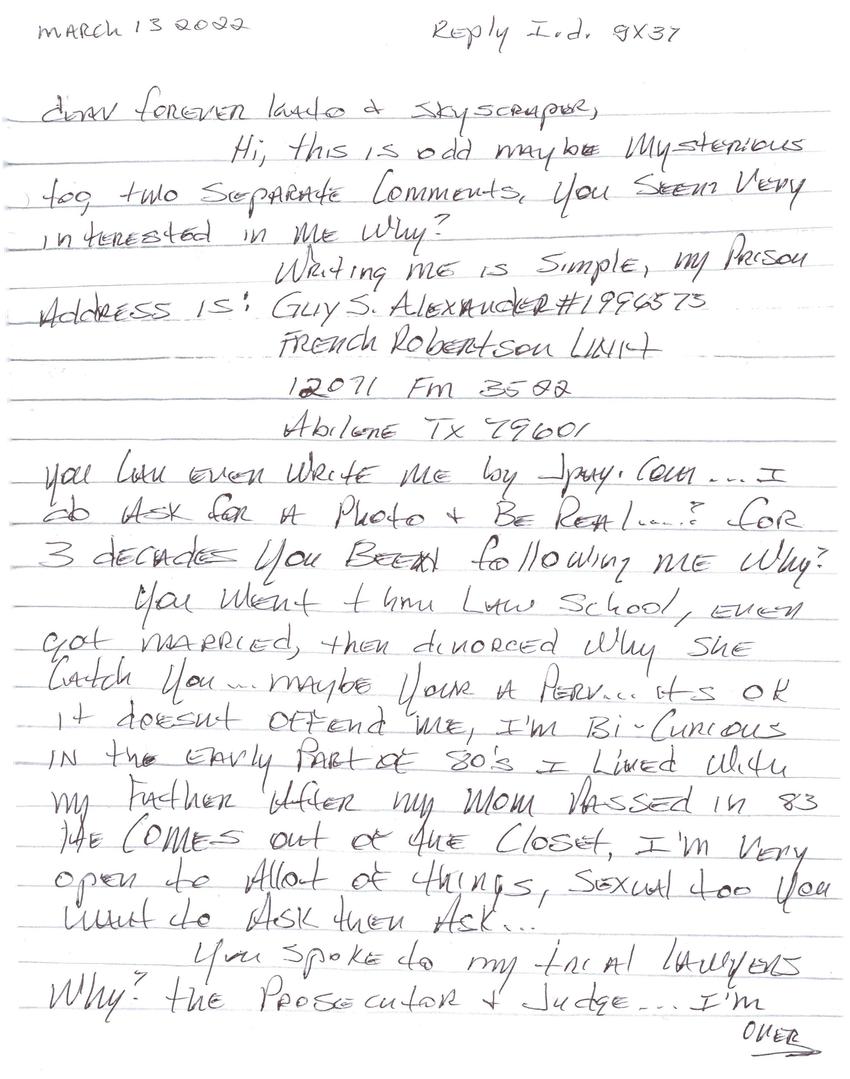 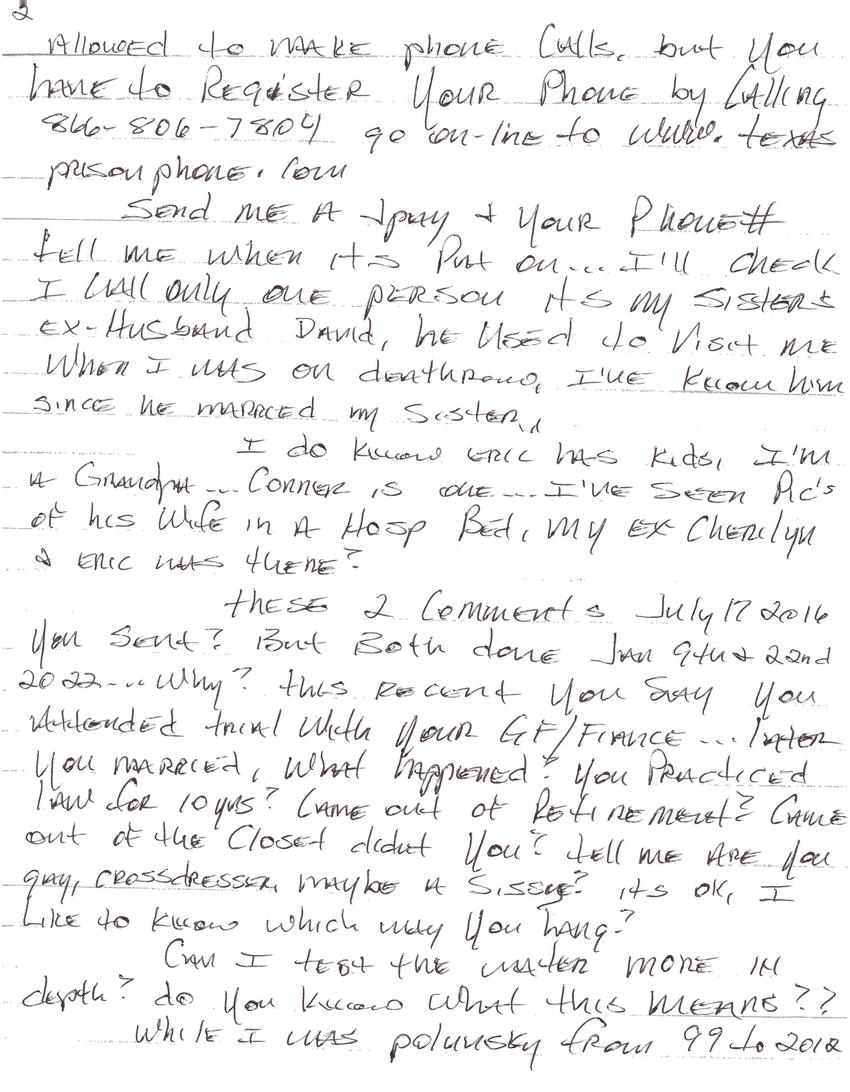 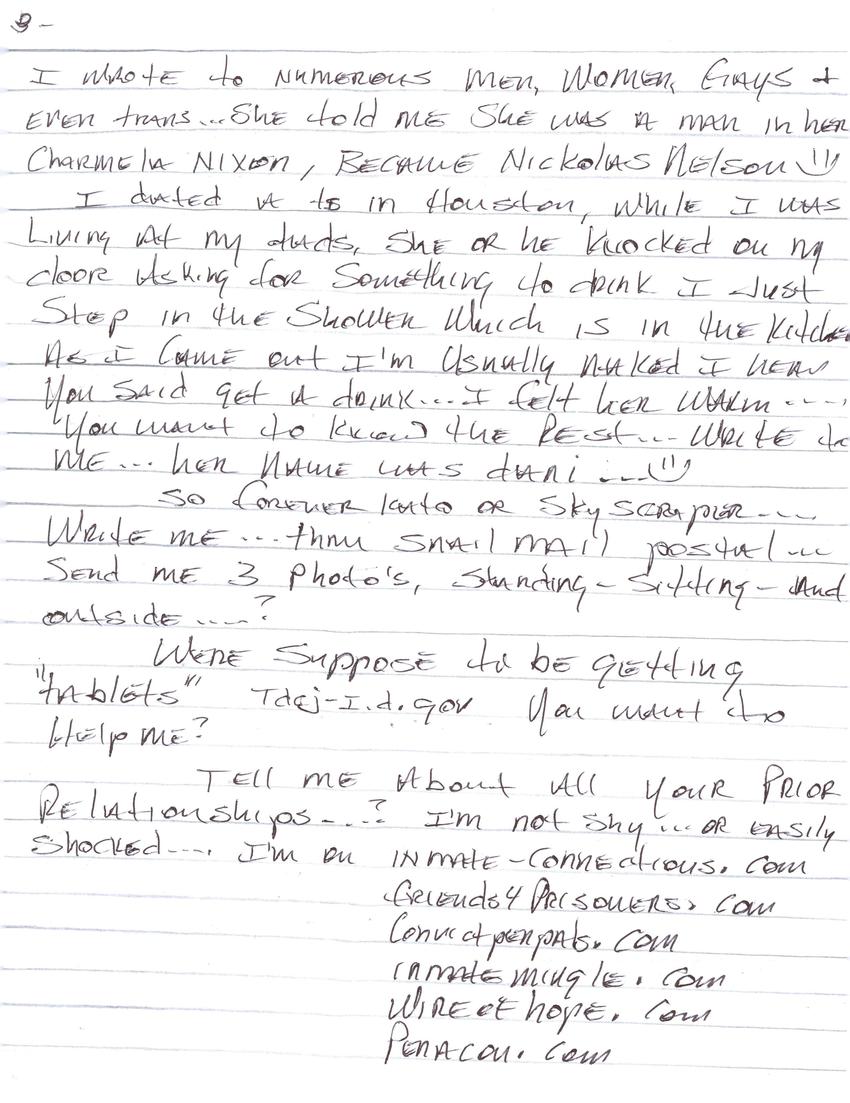 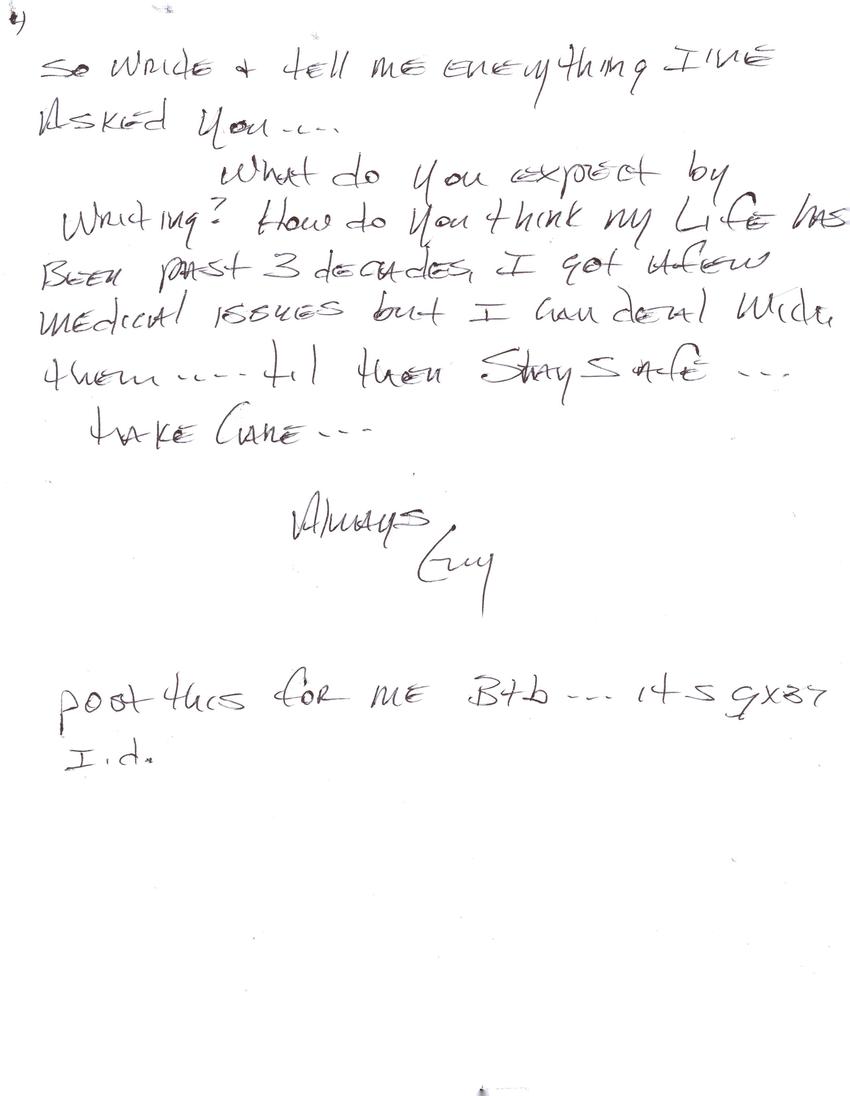 Some of your response is amusing and I certainly cant pretend to know your situation or life... but the fact that I told you that I watched your entire trial in the late 80s and saw the physical evidence, including your actual confession.... how you forced your way into the home of an elderly lady who once helped you...tied her to the fridge with rope, bashed her head in with a brick and then smoked crack over her dead body while you loaded up her car with her jewelry and drove east pawning her possessions as she laid slain in her kitchen... and why you would think I would wait 30 years and then write to you out of some SEXUAL desire or interest in YOU?

Every time I see your name all I can remember are the horrifying pictures of her murdered corpse and the the thought of how frightening her last minutes alive must have been. I doubt any of your prior relationships knew the real details of the crime and I certainly am not interested in talking to you in ANY WAY that would give you ANY sexual curiosity.

I'm sorry I ever tried to talk to you in the first place. I won't even ask about the Wofford family or whether you apologized. Peace be with you Gus... may you find mercy and forgiveness from Ms. Wofford on the other side.