Chapter 3: The Sons of Japheth 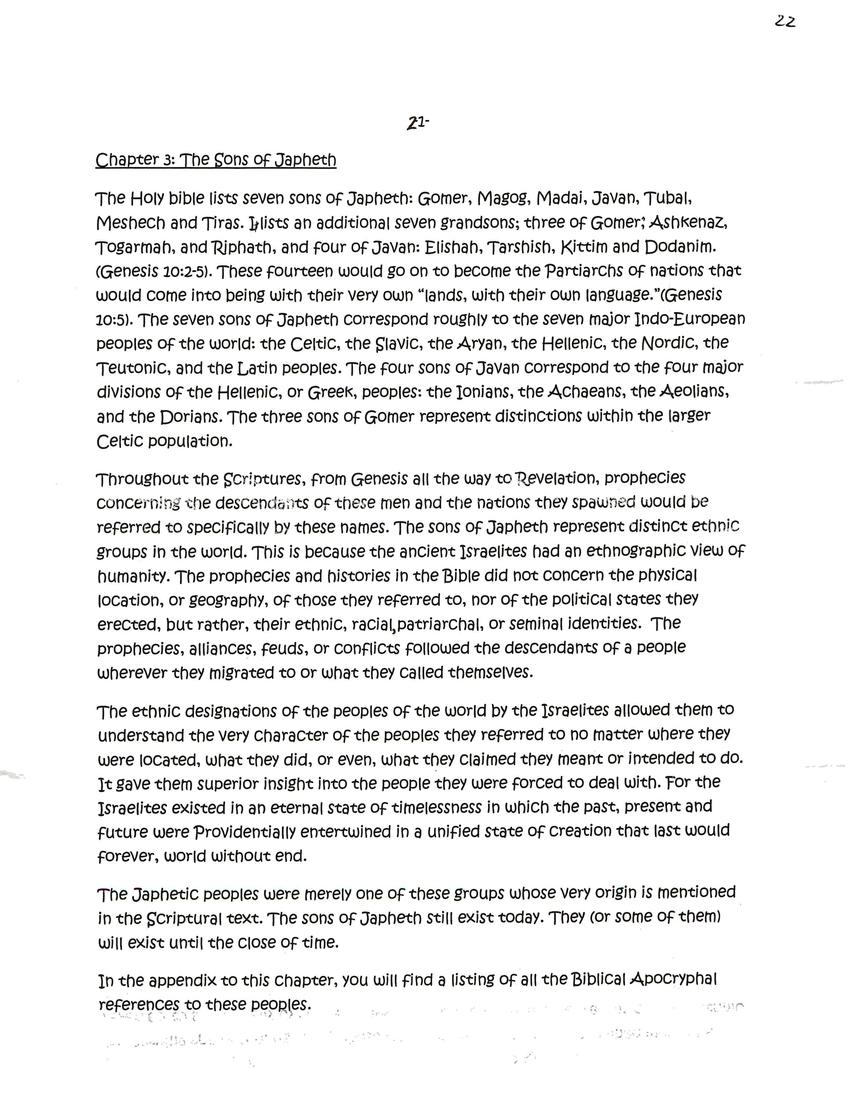 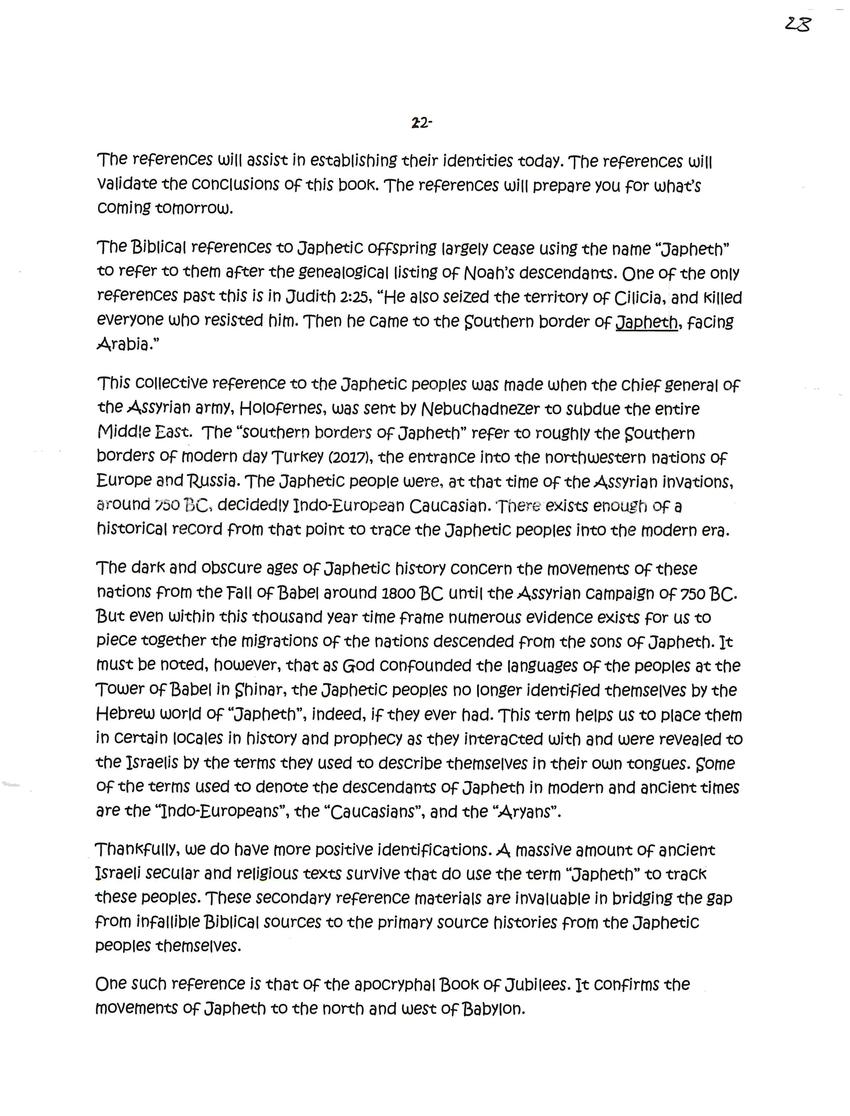 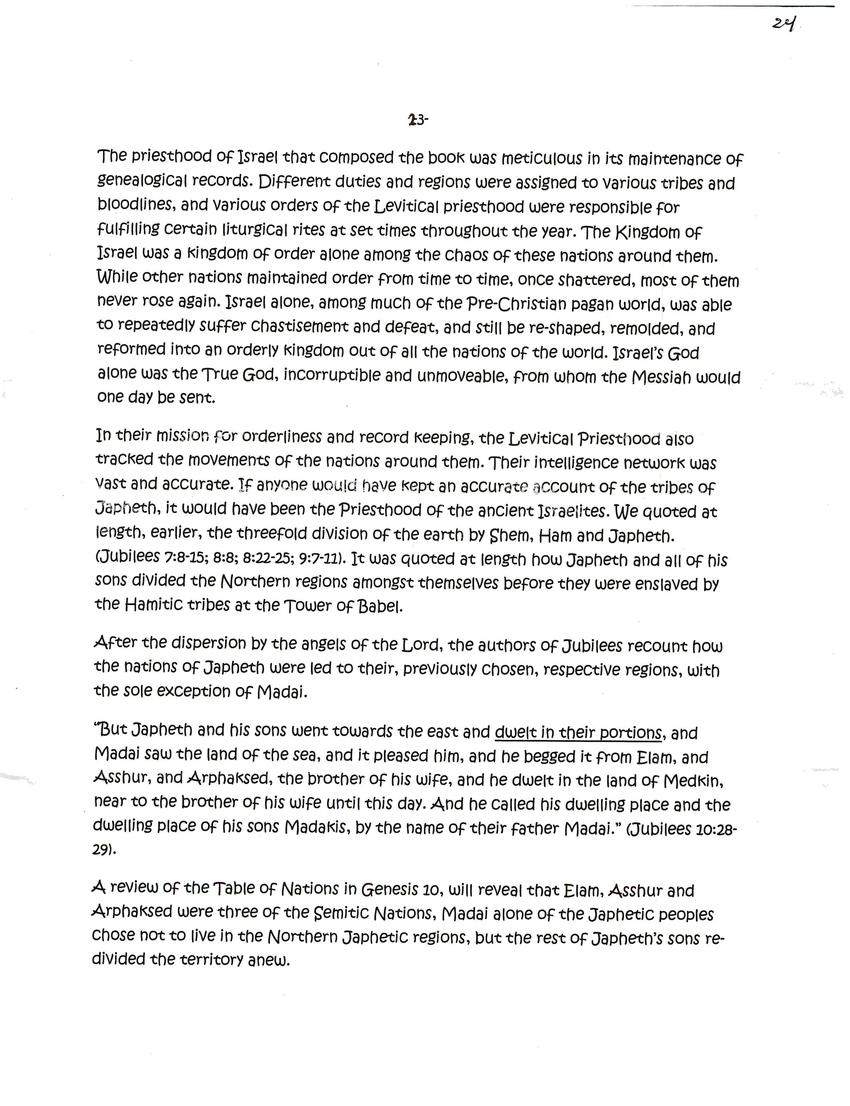 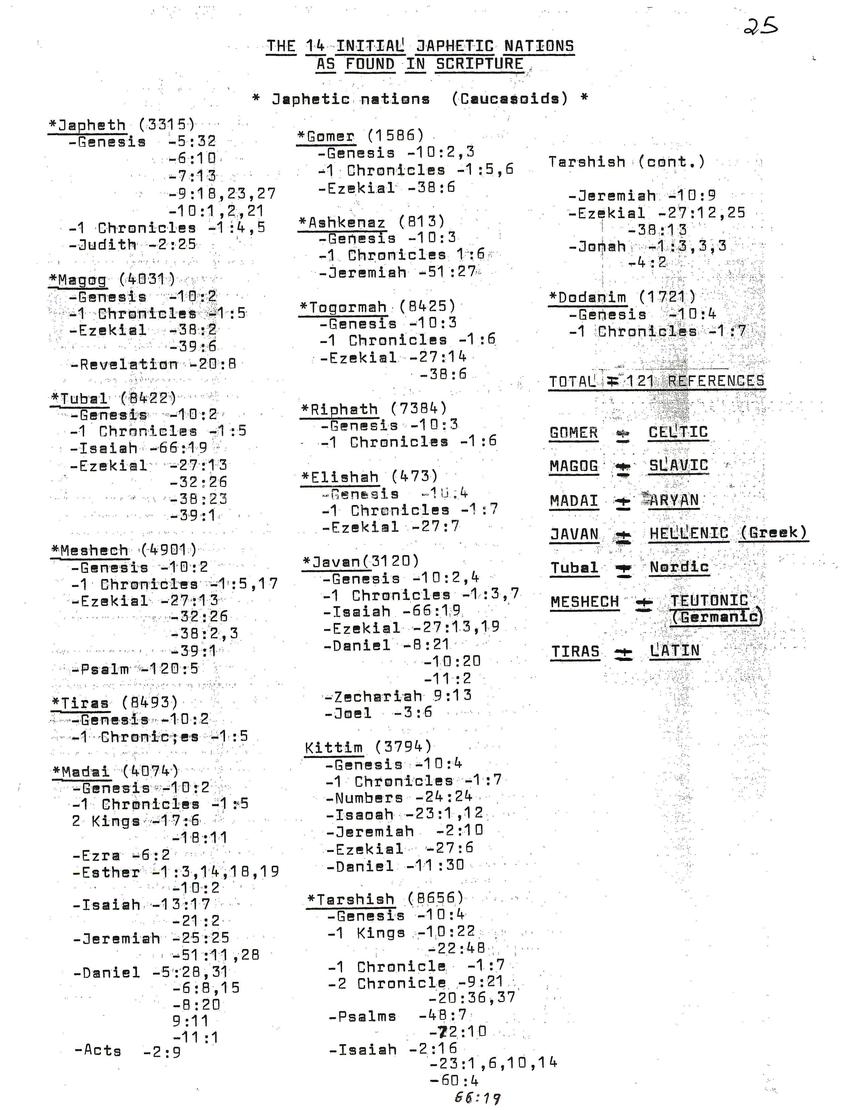 Chapter 3: The Sons of Japheth

The Holy bible lists seven sons of Japheth: Gomer, Magog, Madai, Javan, Tubal, Meshech and Tiras. Lists an additional seven grandsons; three of Gomer; Ashkenaz, Togarmah, and Riphath, and four of Javan: Elishah, Tarshish, Kittim and Dodanim. (Genesis 10:2-5). These fourteen would go on to become the Patriarchs of nations that would come into being with their very own "lands, with their own languages." (Genesis 10:5). The seven sons of Japheth correspond roughly with the seven major Indo-European peoples of the world: the Celtic, the Slavic, the Aryan, the Hellenic, the Nordic, the Teutonic, and the Latin peoples. The four sons of Javan correspond to the four major divisions of the Hellenic, or Greek, peoples: the Ionians, the Achaeans, the Aeolians, and the Dorians. The three sons of Gomer represent distinctions within the larger Celtic population.

Throughout the Scriptures, from Genesis all the way to Revelation, prophecies concerning the descendants of these men and the nations they spawned would be referred to specifically by these names. The sons of Japheth represent distinct ethnic groups in the world. This is because the ancient Israelites had an ethnographic view of humanity. The prophecies and histories in the Bible did not concern the physical location, or geography, of those they referred to, nor of the political states they erected, but rather, their ethnic, racial, patriarchal, or seminal identities. The prophecies, alliances, feuds, or conflicts followed the descendants of a people wherever they migrated to or what they called themselves.

The ethnic designations of the peoples of the world by the Israelites allowed them to understand the very character of the peoples they referred to no matter where they were located, what they did, or even, what they claimed they meant or intended to do. It gave them superior insight into the people they were forced to deal with. For the Israelites existed in an eternal state of timelessness in which the past, present and future were Providentially intertwined in a unified state of creation that last would forever, world without end.

The Japhetic peoples were merely one of these groups whose very origin is mentioned in the Scriptural text. The sons of Japheth still exist today. They (or some of them) will exist until the close of time.

In the appendix to this chapter, you will find a listing of all the Biblical Apocryphal references to these peoples.

The Biblical references to Japhetic offspring largely cease using the name "Japheth" to refer to them after the genealogical listing of Noah's descendants. One of the only references past this is in Judith 2:25, "He also seized the territory of Cilicia, and killed everyone who resisted him. Then he came to the Southern border of Japheth, facing Arabia."

This collective reference to the Japhetic peoples was made when the chief general of the Assyrian army, Holofernes, was sent by Nebuchadnezer to subdue the entire Middle East. The "southern borders of Japheth" refer to roughly the Southern borders of modern day Turkey (2017), the entrance into the northwestern nations of Europe and Russia. The Japhetic people were, at that time of the Assyrian invations, around 750 BC, decidedly Indo-European Caucasian. There exists enough of a historical record from that point to trace the Japhetic peoples into the modern era.

The dark and obscure ages of Japhetic history concern the movements of these nations from the Fall of Babel around 1800 BC until the Assyrian campaign of 750 BC. But even within this thousand year time frame numerous evidence exists for us to piece together the migrations of the nations descended from the sons of Japheth. It must be noted, however, that as God confounded the languages of the peoples at the Tower of Babel in Shinar, the Japhetic peoples no longer identified themselves by the Hebrew world of "Japheth", indeed, if they ever had. This term helps us to place them in certain locales in history and prophecy as they interacted with and were revealed to the Israelis by the terms they used to describe themselves in their own tongues. Some of the terms used to denote the descendants of Japheth in modern and ancient times are the "Indo-Europeans", the "Caucasians", and the "Aryans".

Thankfully, we do have more positive identifications. A massive amount of ancient Israeli secular and religious texts survive that do use the term "Japheth" to track these peoples. These secondary reference materials are invaluable in bridging the gap from infallible Biblical sources to the primary source histories from the Japhetic peoples themselves.

One such reference is that of the apocryphal Book of Jubilees. It confirms the movements of Japheth to the north and west of Babylon.

The priesthood of Israel that composed the book was meticulous in its maintenance of genealogical records. Different duties and regions were assigned to various tribes and bloodlines, and various orders of the Levitical priesthood were responsible for fulfilling certain liturgical rites at set times throughout the year. The Kingdom of Israel was a kingdom of order alone among the chaos of these nations around them. While other nations maintained order from time to time, once shattered, most of them never rose again. Israel alone, among much of the Pre-Christian pagan world, was able to repeatedly suffer chastisement and defeat, and still be re-shaped, remolded, and reformed into an orderly kingdom out of all the nations of the world. Israel's God alone was the True God, incorruptible and unmoveable, from whom the Messiah would one day be sent.

In their mission for orderliness and record keeping, the Levitical Priesthood also tracked the movements of the nations around them. Their intelligence network was vast and accurate. If anyone would have kept an accurate account of the tribes of Japheth, it would have been the Priesthood of the ancient Israelites. We quoted at length, earlier, the threefold division of the earth by Shem, Ham and Japheth. (Jubilees 7:8-15; 8:8; 8:22-25; 9:7-11). It was quoted at length how Japheth and all of his sons divided the Northern regions amongst themselves before they were enslaved by the Hamitic tribes at the Tower of Babel.

After the dispersion by the angels of the Lord, the authors of Jubilees recount how the nations of Japheth were led to their, previously chosen, respective regions, with the sole exception of Madai.

"But Japheth and his sons went towards the east and dwelt in their portions, and Madai saw the land of the sea, and it pleased him, and he begged it from Elam, and Asshur, and Arphaksed, the brother of his wife, and he dwelt in the land of Medkin, near to the brother of his wife until this day. And he called his dwelling place and the dwelling place of his sons Madakis, by the name of their father Madai." (Jubilees 10:28-29).

A review of the Table to Nations in Genesis 10, will reveal that Elam, Asshur and Arphaksed were three of the Semitic Nations, Madai alone of the Japhetic peoples chose not to live in the Northern Japhetic regions, but the rest of Japheth's sons re-divided the territory anew.

THE 14 INITIAL JAPHETIC NATIONS AS FOUND IN SCRIPTURE