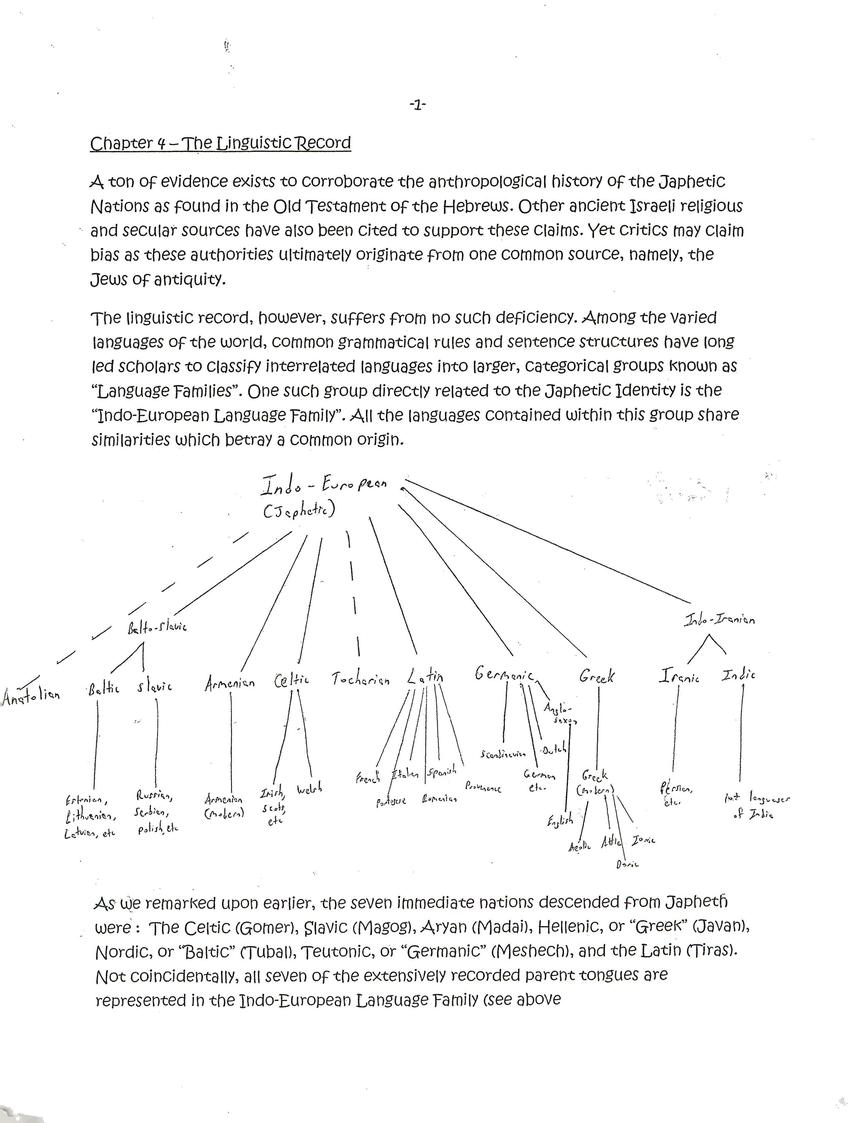 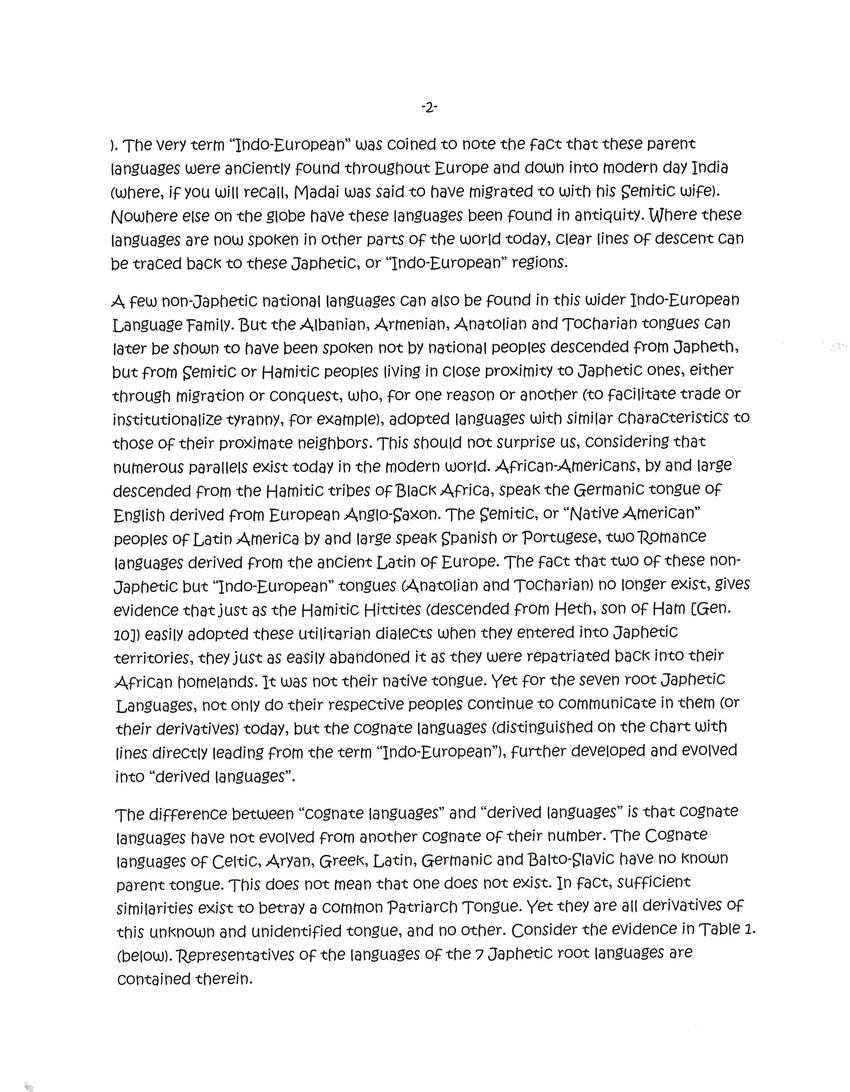 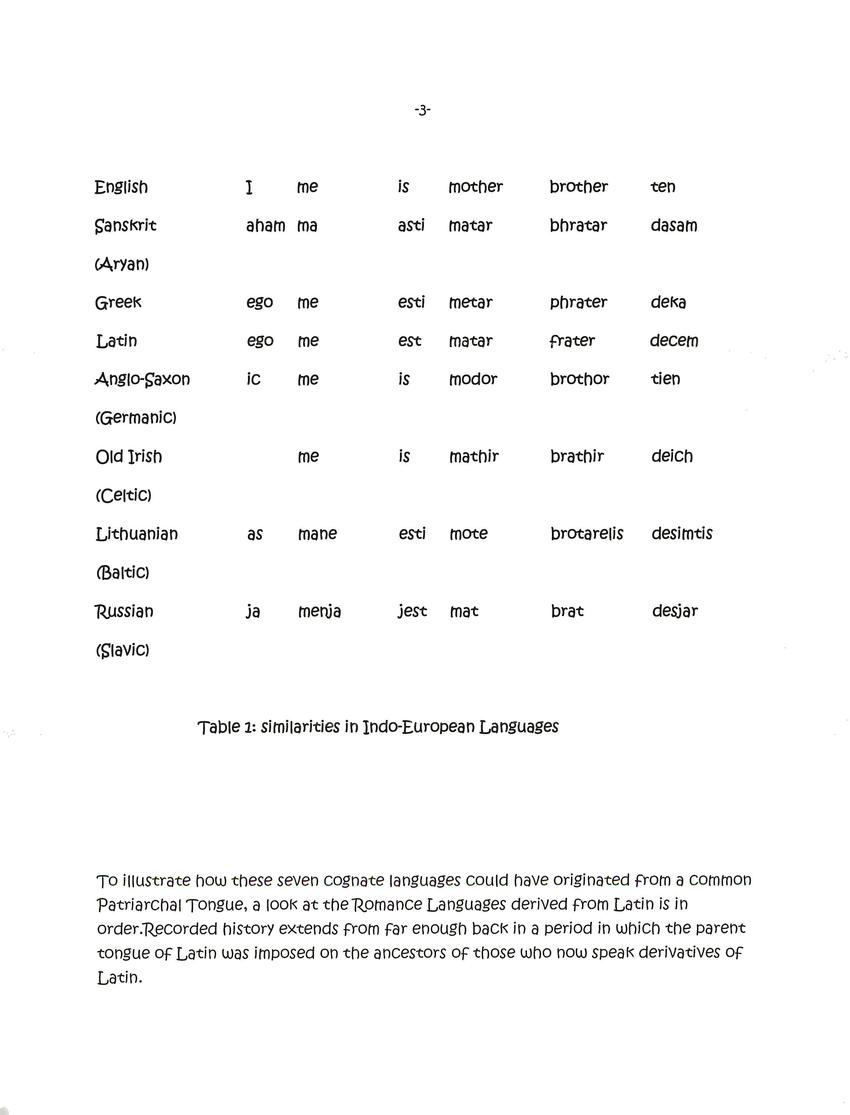 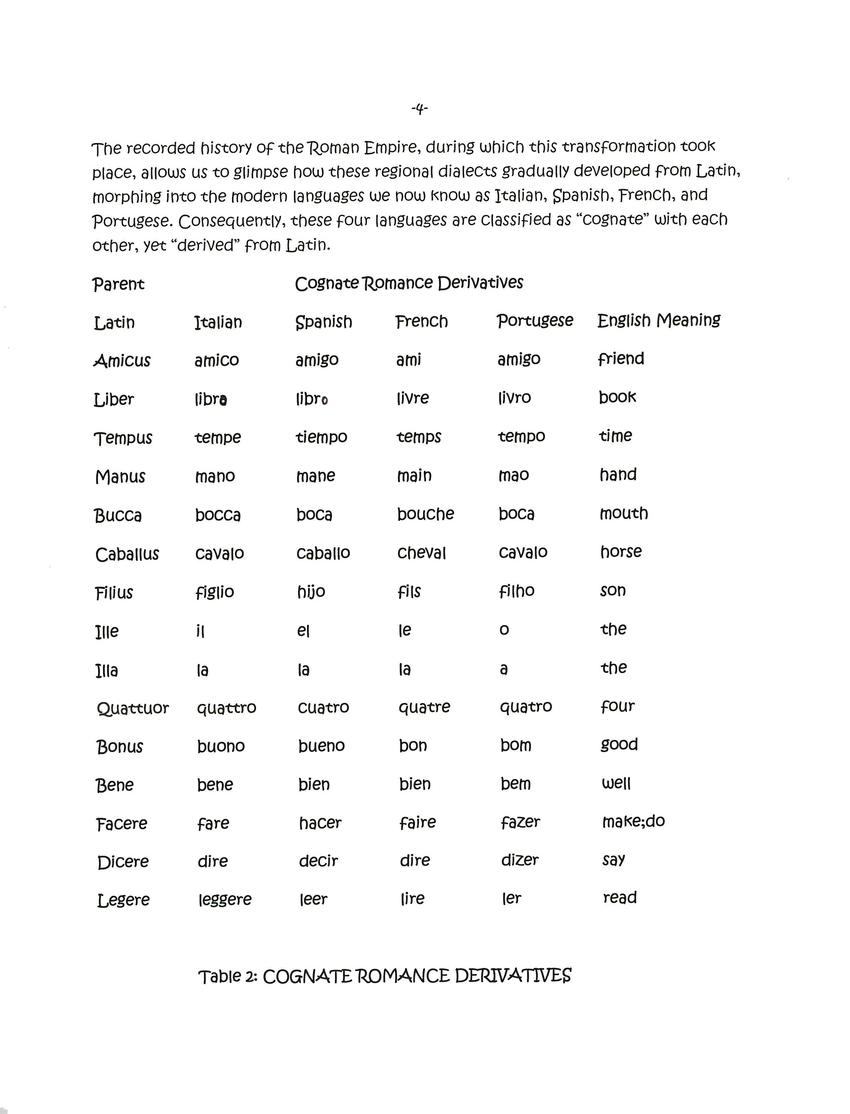 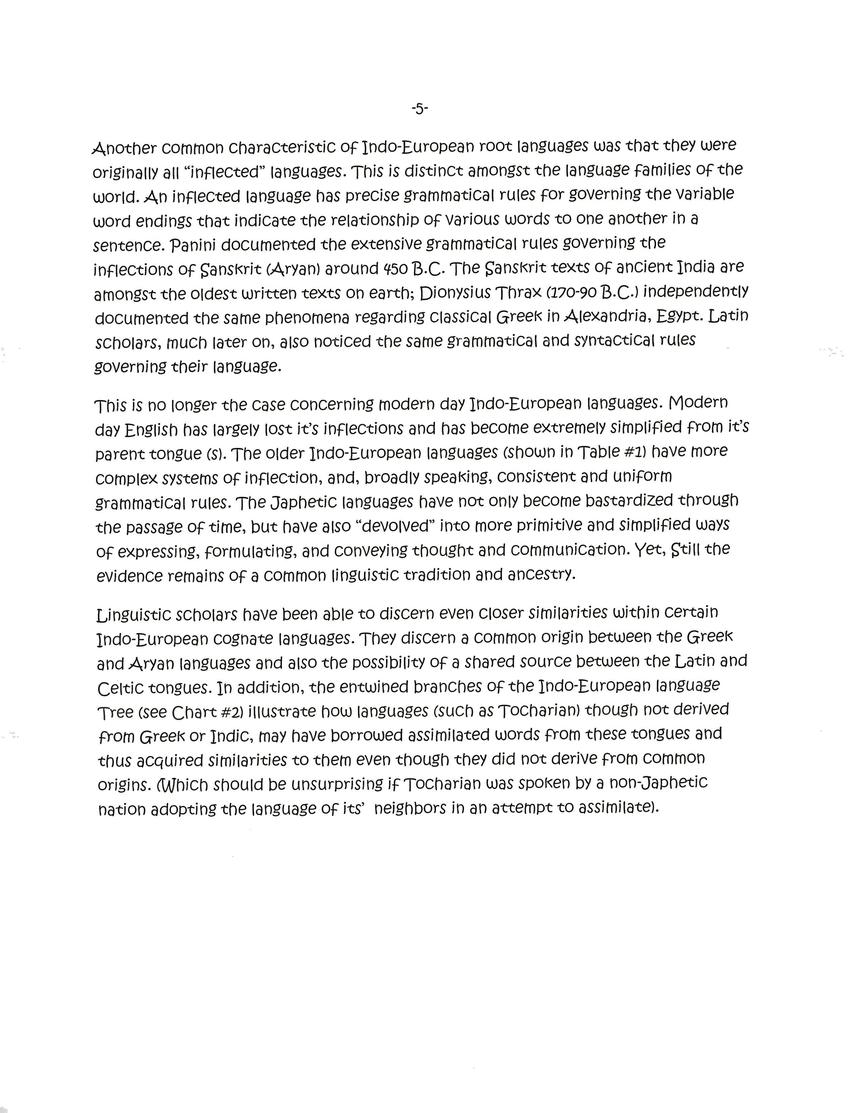 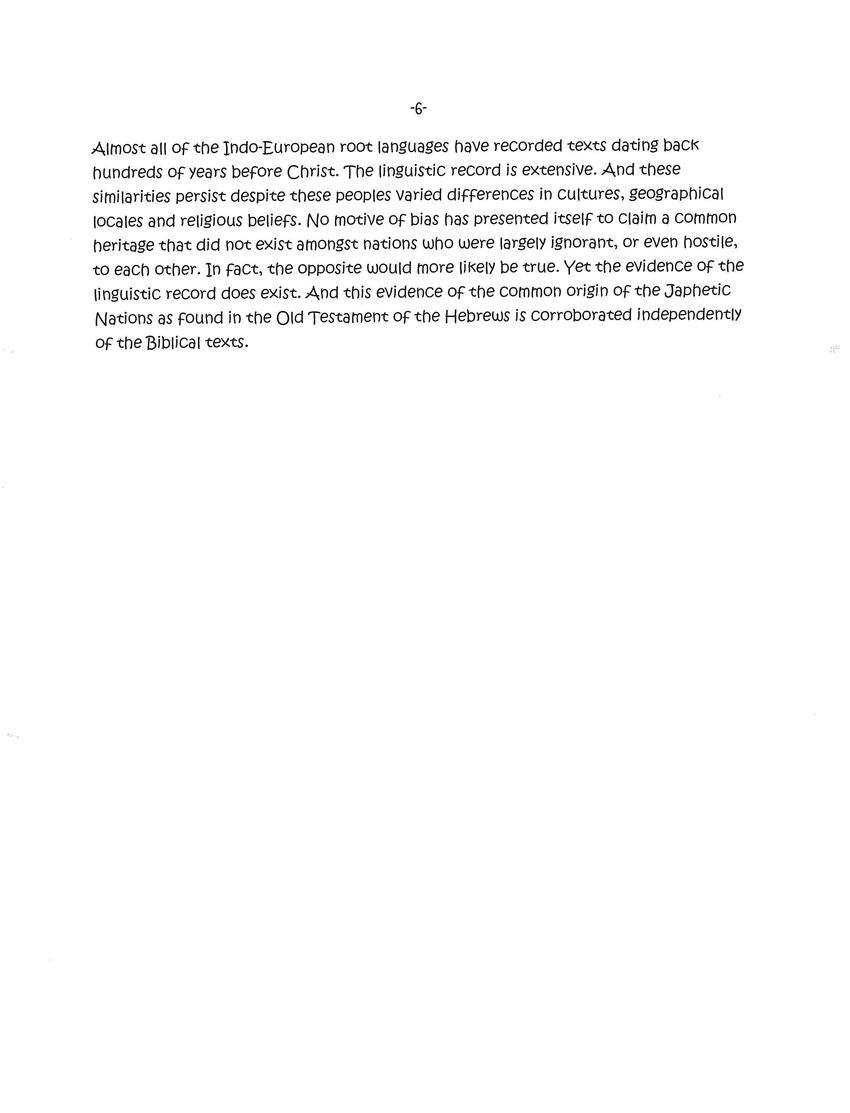 A ton of evidence exists to corroborate the anthropological history of the Japhetic Nations as found in the Old Testament of the Hebrews. Other ancient Israeli religious and secular sources have also been cited to support these claims. Yet critics may claim bias as these authorities ultimately originate from one common source, namely, the Jews of antiquity.

The linguistic record, however, suffers from no such deficiency. Among the varied languages of the world, common grammatical rules and sentence structures have long led scholars to classify interrelated languages into larger, categorical groups known as "Language Families". One such group directly related to the Japhetic Identity is the "Indo-European Language Family". All the languages contained within this group share similarities which betray a common origin.

As we remarked upon earlier, the seven immediate nations descended from Japheth were: The Celtic (Gomer), Slavic (Magog), Aryan (Madai), Hellenic, or "Greek" (Javan), Nordic, or "Baltic" (Tubal), Teutonic, or "Germanic" (Meshech), and the Latin (Tiras). Not coincidentally, all seven of the extensively recorded parent tongues are represented in the Indo-European Language Family (see above). The very term "Indo-European" was coined to note the fact that these parent languages were anciently found throughout Europe and down into modern day India (where, if you will recall, Madai was said to have migrated to with his Semitic wife). Nowhere else on the globe have these languages been found in antiquity. Where these languages are now spoken in other parts of the world today, clear lines of descent can be traced back to these Japhetic, or "Indo-European" regions.

A few non-Japhetic national languages can also be found in this wider Indo-European Language Family. But the Albanian, Armenian, Anatolian and Tocharian tongues can later be shown to have been spoken not by national peoples descended from Japheth, but from Semitic or Hamitic peoples living in close proximity to Japhetic ones, either through migration or conquest, who, for one reason or another (to facilitate trade or institutionalize tyranny, for example), adopted languages with similar characteristics to those of their proximate neighbors. This should not surprise us, considering that numerous parallels exist today in the modern world. African-Americans, by and large descended from the Hamitic tribes of Black Africa, speak the Germanic tongue of English derived from European Anglo-Saxon. The Semitic, or "Native American" peoples of Latin America by and large speak Spanish or Portuguese, two Romance languages derived from the ancient Latin of Europe. The fact that two of these non-Japhetic but "Indo-European" tongues (Anatolian and Tocharian) no longer exists, gives evidence that just as the Hamitic Hittites (descended from Heth, son of Ham [Gen. 10]) easily adopted these utilitarian dialects when they entered into Japhetic territories, they just as easily abandoned it as they were repatriated back into their African homelands. It was not their native tongue. Yet for the seven root Japhetic Languages, not only do their respective peoples continue to communicate in them (or their derivatives) today, but the cognate languages (distinguished on the chart with lines directly leading from the term "Indo-European"), further developed and evolved into "derived languages".

The difference between "cognate languages" and "derived languages" is that cognate languages have not evolved from another cognate of their number. The Cognate languages of Celtic, Aryan, Greek, Latin, Germanic and Balto-Slavic have no known parent tongue. This does not mean that one does not exist. In fact, sufficient similarities exist to betray a common Patriarch Tongue. Yet they are all derivatives of this unknown and unidentified tongue, and no other. Consider the evidence in Table 1. (below). Representatives of the languages of the 7 Japhetic root languages are contained therein.

To illustrate how these seven cognate languages could have originated from a common Patriarchal Tongue, a look at the Romance Languages derived from Latin is in order. Recorded history extends from far enough back in a period in which the parent tongue of Latin was imposed on the ancestors of those who now speak derivatives of Latin.

The recorded history of the Roman Empire, during which this transformation took place, allows us to glimpse how these regional dialects gradually developed from Latin, morphing into the modern languages we now know as Italian, Spanish, French, and Portuguese. Consequently, these four languages are classified as "cognate" with each other, yet "derived" from Latin.

Another common characteristic of Indo-European root languages was that they were originally all "inflected" languages. This is distinct amongst the language families of the world. An inflected language has precise grammatical rules for governing the variable word endings that indicate the relationship of various words to one another in a sentence. Panini documented the extensive grammatical rules governing the inflections of Sanskrit (Aryan) around 450 B.C. The Sanskrit texts of ancient India are amongst the oldest written texts on earth; Dionysius Thrax (170-90 B.C.) independently documented the same phenomena regarding classical Greek in Alexandria, Egypt. Latin scholars, much later on, also noticed the same grammatical and syntactical rules governing their language.

This is no longer the case concerning modern day Indo-European languages. Modern day English has largely lost it's inflections and has become extremely simplified from it's parent tongue(s). The older Indo-European languages (shown in Table #1) have more complex systems of inflection, and, broadly speaking, consistent and uniform grammatical rules. The Japhetic languages have not only become bastardized through the passage of time, but have also "devolved" into more primitive and simplified ways of expressing, formulating, and conveying thought and communication. Yet, Still the evidence remains of a common linguistic tradition and ancestry.

Linguistic scholars have been able to discern even closer similarities within certain Indo-European cognate languages. They discern a common origin between the Greek and Aryan languages and also the possibility of a shared source between the Latin and Celtic tongues. In addition, the entwined branches of the Indo-European language Tree (see Chart #2) illustrate how languages (such as Tocharian) though not derived from Greek or Indic, may have borrowed assimilated words from these tongues and thus acquired similarities to them even though they did not derive from common origins. (Which should be unsurprising if Tocharian was spoke by a non-Japhetic nation adopting the language of its' neigbors in an attempt to assimilate).

Almost all of the Indo-European root languages have recorded texts dating back hundreds of years before Christ. The linguistic record is extensive. And these similarities persist despite these peoples varied differences in cultures, geographical locales and religious beliefs. No motive of bias has presented itself to claim a common heritage that did not exist amongst nations who were largely ignorant, or even hostile, to each other. In fact, the opposite would more likely be true. Yet the evidence of the linguistic record does exist. And this evidence of the common origin of the Japhetic Nations as found in the Old Testament of the Hebrews is corroborated independently of the Biblical texts.