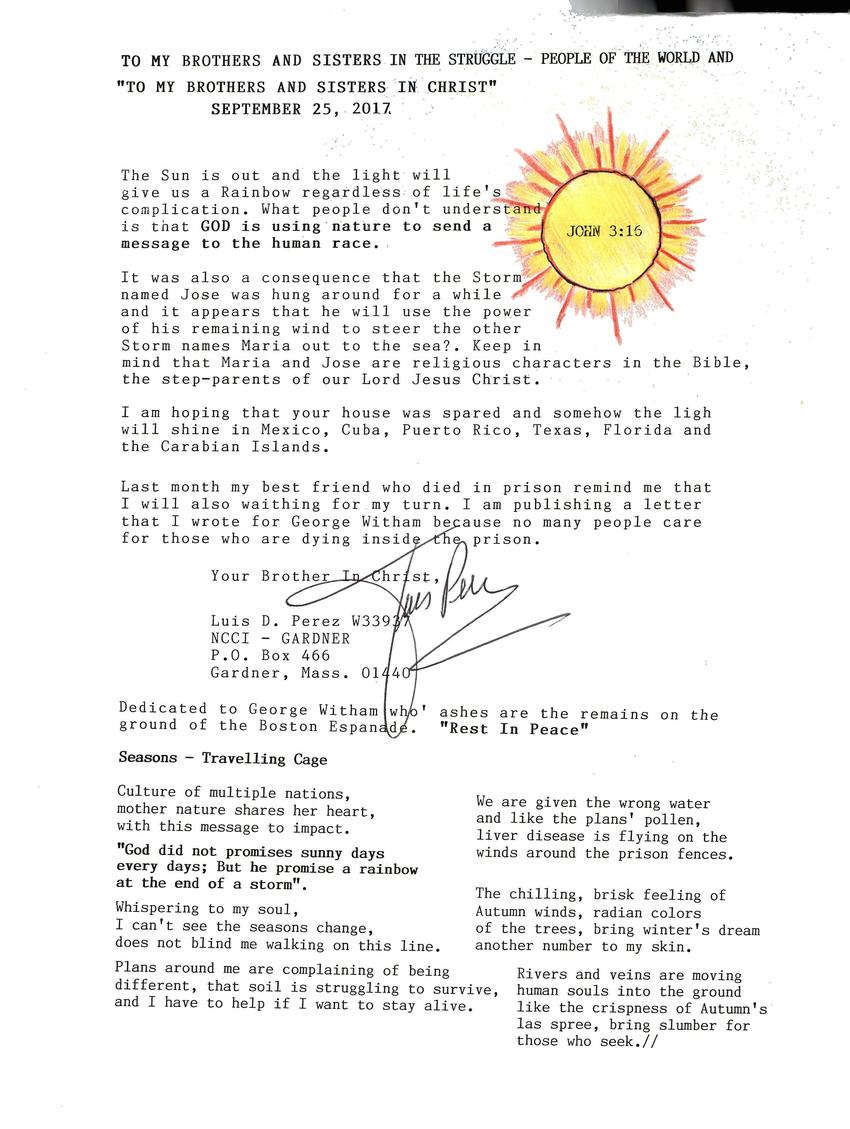 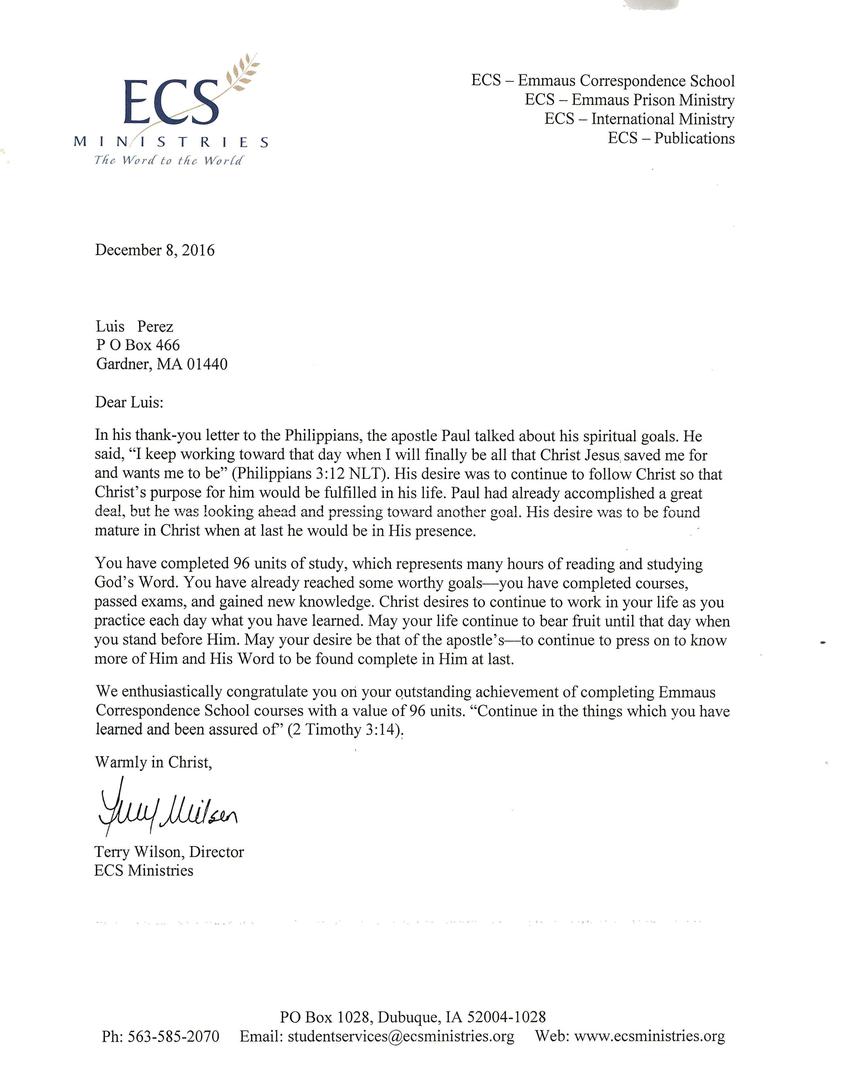 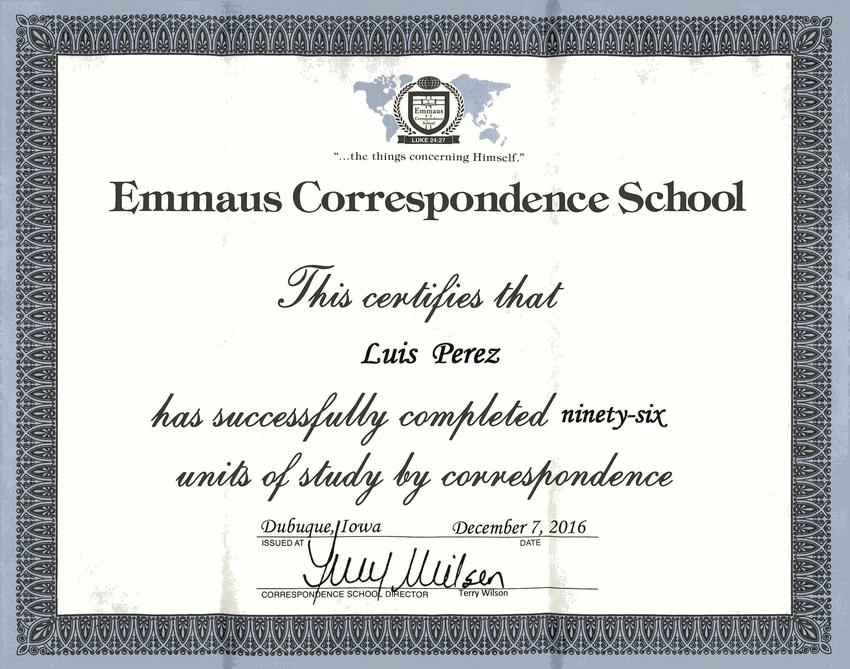 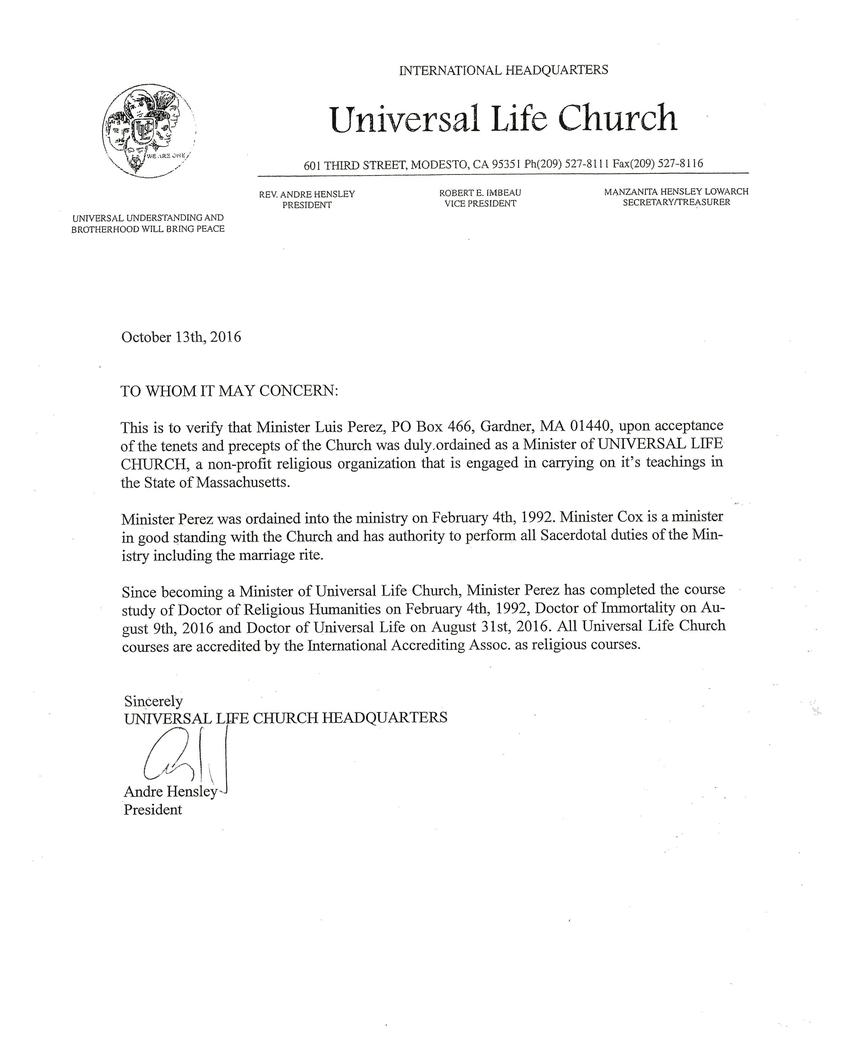 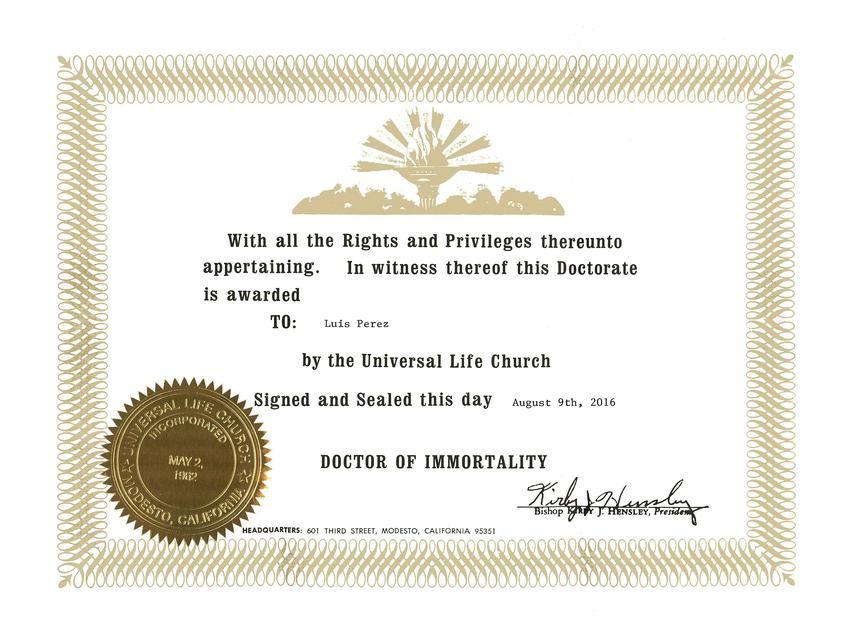 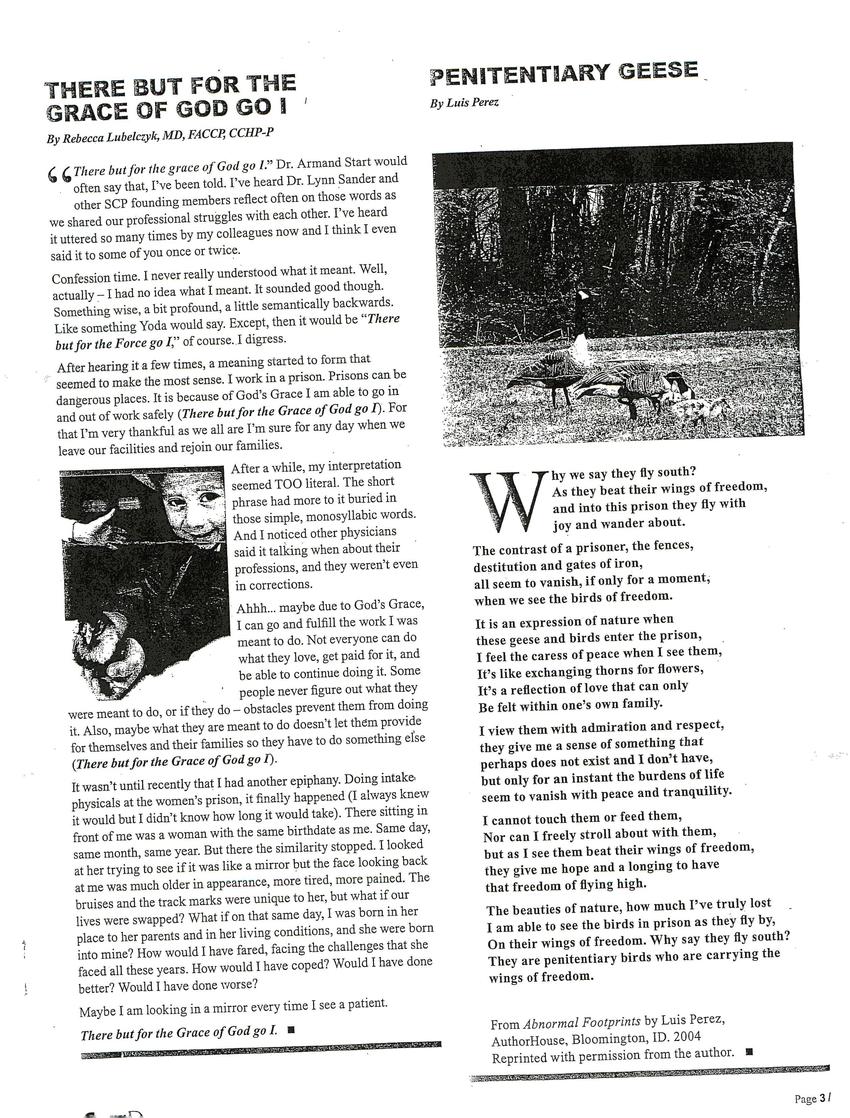 The Sun is out and the light will give us a Rainbow regardless of life's complication. What people don't understand is that GOD is using nature to send a message to the human race.

It was also a consequence that the Storm named Jose was hung around for a while and it appears that he will use the power of his remaining wind to steer the other Storm names Maria out to the sea?. Keep in mind that Maria and Jose are religious characters in the Bible, the step-parents of our Lord Jesus Christ.

I am hoping that your house was spared and somehow the light will shine in Mexico, Cuba, Puerto Rico, Texas, Florida and the Caribbean Islands.

Last month my best friend who died in prison remind me that I will also waiting for my turn. I am publishing a letter that I wrote for George Witham because no many people care for those who are dying inside the prison.

Your Brother In Christ,

Dedicated to George Witham who's ashes are the remains on the ground of the Boston Espanade. "Rest In Peace"

Culture of multiple nations,
mother nature shares her heart,
with this message to impact.

"God did not promise sunny days
every days; But he promise a rainbow
at the end of a storm".

Whispering to my soul,
I can't see the seasons change,
does not blind me walking on this lin.

Plans around me are complaining of being
different, that soil is struggling to survive,
and I have to help if I want to stay alive.

We are given the wrong water
and like the plans' pollen,
liver disease is flying on the
winds around the prison fences.

The chilling, brisk feeling of
Autumn winds, radian colors
of the trees, bring winter's dream
another number to my skin.

Rivers and veins are moving
human souls into the ground
like the crispness of Autumn's
las spree, bring slumber for
those who seek.//

ECC
MINISTRIES
The World to the World

In his thank-you letter to the Philippians, the apostle Paul talked about his spiritual goals. He said, "I keep working toward that day when I will finally be all that Christ Jesus saved me for and wants me to be" (Philippians 3:12 NLT). His desire was to continue to follow Christ so that Christ's purpose for him would be fulfilled in his life. Paul had already accomplished a great deal, but he was looking ahead and pressing toward another goal. His desire was to be found mature in Christ when at last he would be in His presence.

You have completed 96 units of study, which represents many hours of reading and studying God's Word. You have already reached some worthy goals - you have completed courses, passed exams, and gained new knowledge. Christ desires to continue to work in your life as you practice each day what you have learned. May your life continue to bear fruit until that day when you stand before Him. May your desire be that of the apostle's - to continue to press on to know more of Him and His Word to be found complete in Him at last.

We enthusiastically congratulate you on your outstanding achievement of completing Emmaus Correspondence School courses with a value of 96 units. "Continue in the things which you have learned and been assured of" (2 Timothy 3:14).

[Emmaus logo]
"...the things concerning Himself."

has successfully completed ninety-six
units of study by correspondence

TO WHOM IT MAY CONCERN:

This is to verify that Minister Luis Perez, PO Box 466, Gardner, MA 01440, upon acceptance of the tenets and precepts of the Church was duly ordained as a Minister of UNIVERSAL LIFE CHURCH, a non-profit religious organization that is engaged in carrying on it's teachings in the State of Massachusetts.

Minister Perez was ordained into the ministry on February 4th, 1992. Minister Cox is a minister in good standing with the Church and has authority to perform all Sacerdotal duties of the Ministry including the marriage rite.

With all the Rights and Privileges thereunto appertaining. In witness thereof this Doctorate is awarded

by the Universal Life Church
Signed and Sealed this day August 9th, 2016

THERE BUT FOR THE GRACE OF GOD GO I
By Rebecca Lubelczyk, MD, FACCP, CHP-P

"There but for the grace of God go I." Dr. Armand Start would often say that, I've been told. I've heard Dr. Lynn Sander and other SCP founding members reflect often on those words as we shared our professional struggles with each other. I've heard it uttered so many times by my colleagues now and I think I even said it to some of you once or twice.

Confession time. I never really understood what it meant. Well, actually - I had no idea what I meant. It sounded good though. Something wise, a bit profound, a little semantically backwards. Like something Yoda would say. Except, then it would be "There but for the Force go I," of course. I digress.

After hearing it a few times, a meaning started to form that seemed to make the most sense. I work in a prison. Prisons can be dangerous places. It is because of God's Grace I am able to go in and out of work safely (There but for the Grace of God go I). For that I'm very thankful as well are I'm sure for any day when we leave our facilities and rejoin our families.

After a while, my interpretation seemed TOO literal. The short phrase had more to it buried in those simple, monosyllabic words. And I noticed other physicians said it talking when about their professions, and they weren't even in corrections.

Ahhh... maybe due to God's Grace, I can go and fulfil the work I was meant to do. Not everyone can do what they love, get paid for it, and be able to continue doing it. Some people never figure out what they were meant to do, or if they do - obstacles prevent them from doing it. Also, maybe what they are meant to do doesn't let them provide for themselves and their families so they have to do something else (There but for the Grace of God go I).

It wasn't until recently that I had another epiphany. Doing intake physicals at the women's prison, it finally happened (I always knew it would but I didn't know how long it would take). There sitting in front of me was a woman with the same birthdate as me. Same day, same month, same year. But there the similarity stopped. I looked at her trying to see if it was like a mirror but the face looking back at me was much older in appearance, more tired, more pained. The bruises and the track marks were unique to her, but what if our lives were swapped? What if on that same day, I was born in her place to her parents and in her living conditions, and she were born into mine? How would I have fared, facing the challenges that she faced all these years. How would I have coped? Would I have done better? Would I have done worse?

Maybe I am looking in a mirror every time I see a patient.

There but for the Grace of God go I.

Why we say these fly south?
As they beat their wings of freedom,
and into this prison they fly with
joy and wander about.

The contrast of a prisoner, the fences,
destitution and gates of iron,
all seem to vanish, if only for a moment,
when we see the birds of freedom.

It is an expression of nature when
these geese and birds enter the prison,
I feel the caress of peace when I see them,
It's like exchanging thorns for flowers,
It's a reflection of love that can only
Be felt within one's own family.

I view them with admiration and respect,
they give me a sense of something that
perhaps does not exist and I don't have,
but only for an instant the burdens of life
seem to vanish with peace and tranquillity.

I cannot touch them or feed them,
Nor can I freely stroll about with them,
but as I see them beat their wings of freedom,
they give me hope and a longing to have
that freedom of flying high.

The beauties of nature, how much I've truly lost
I am able to see the birds in prison as they fly by,
On their wings of freedom. Why say they fly south?
They are penitentiary birds who are carrying the
wings of freedom.

From Abnormal Footprints by Luis Perez,
AuthorHouse, Bloomington, ID. 2004
Reprinted with permission from the author.