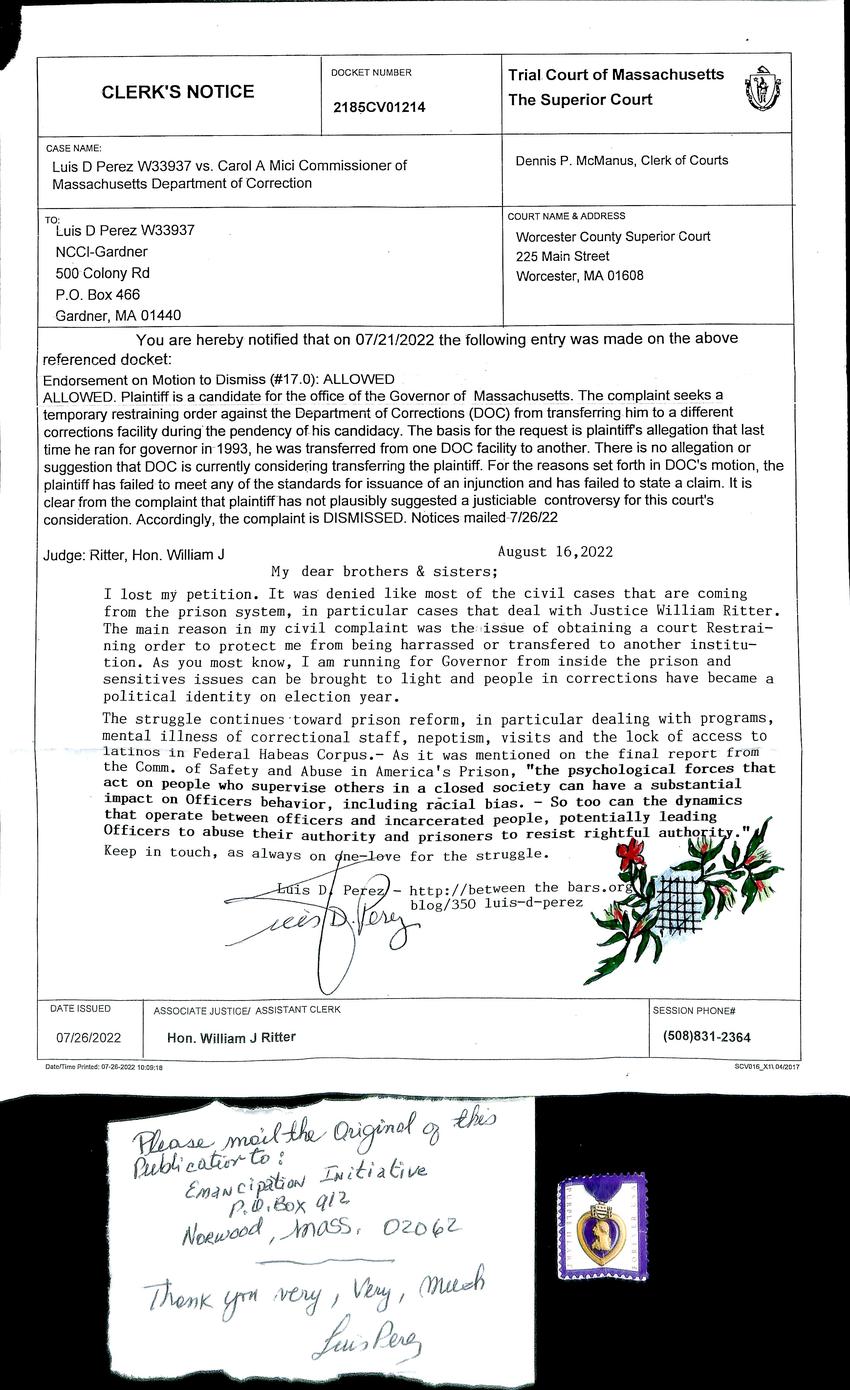 You are hereby notified that on 07/21/2022 the following entry was made on the above
referenced docket:
Endorsement on Motion to Dismiss (#17.0): ALLOWED
ALLOWED. Plaintiff is a candidate for the office of the Governor of Massachusetts. The complaint seeks a
temporary restraining order against the Department of Corrections (DOC) from transferring him to a different
corrections facility during the pendency of his candidacy. The basis for the request is plaintiff's allegation that last
time he ran for governor in 1993, he was transferred from one DOC facility to another. There is no allegation or
suggestion that DOC is currently considering transferring the plaintiff. For the reasons set forth in DOC's motion, the
plaintiff has failed to meet any of the standards for issuance of an injunction and has failed to state a claim. It is
clear from the complaint that plaintiff has not plausibly suggested a justiciable controversy for this court's
consideration. Accordingly, the complaint is DISMISSED. Notices mailed 7/26/22

My dear brothers & sisters;
I lost my petition. It was denied like most of the civil cases that are coming
from the prison system, in particular cases that deal with Justice William Ritter.
The main reason in my civil complaint was the issue of obtaining a court Restraining
order to protect me from being harrassed or transferred to another institution.
As you most know, I am running for Governor from inside the prison and
sensitives issues can be brought to light and people in corrections have became a
political identity on election year.
The struggle continues toward prison reform, in particular dealing with programs,
mental illness of correctional staff, nepotism, visits and the lock of access to
latinos in Federal Habeas Corpus.- As it was mentioned on the final report from
the Comm. of Safety and Abuse in America's Prison, "the psychological forces that
act on people who supervise others in a closed society can have a substantial
impact on Officers behavior, including racial bias. - So too can the dynamics
that operate between officers and incarcerated people, potentially leading
Officers to abuse their authority and prisoners to resist rightful authority."
Keep in touch, as always on one-love for the struggle.