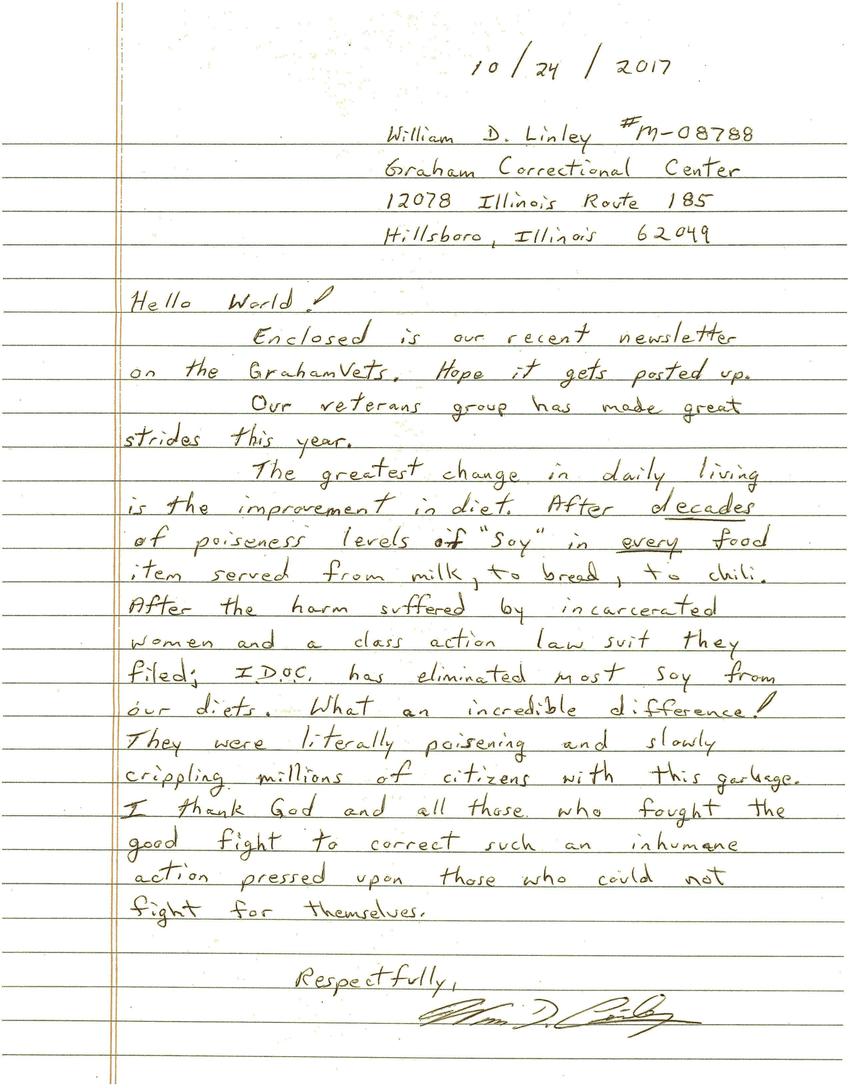 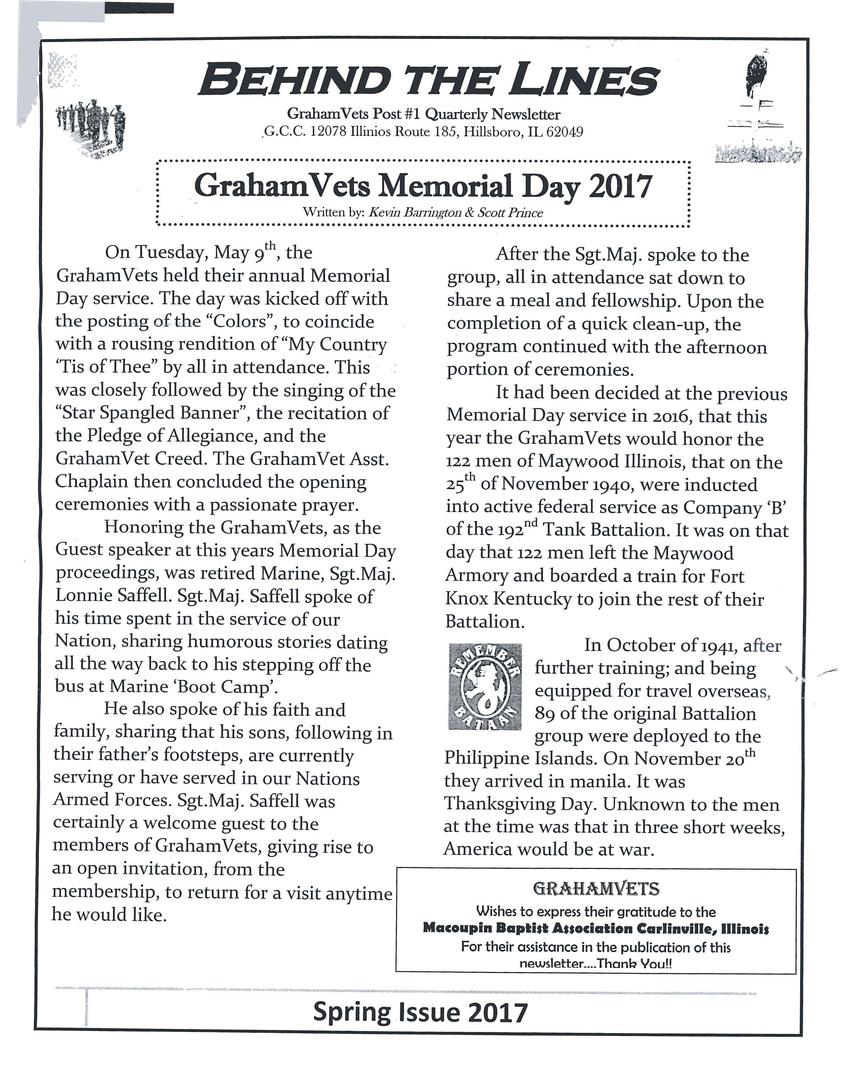 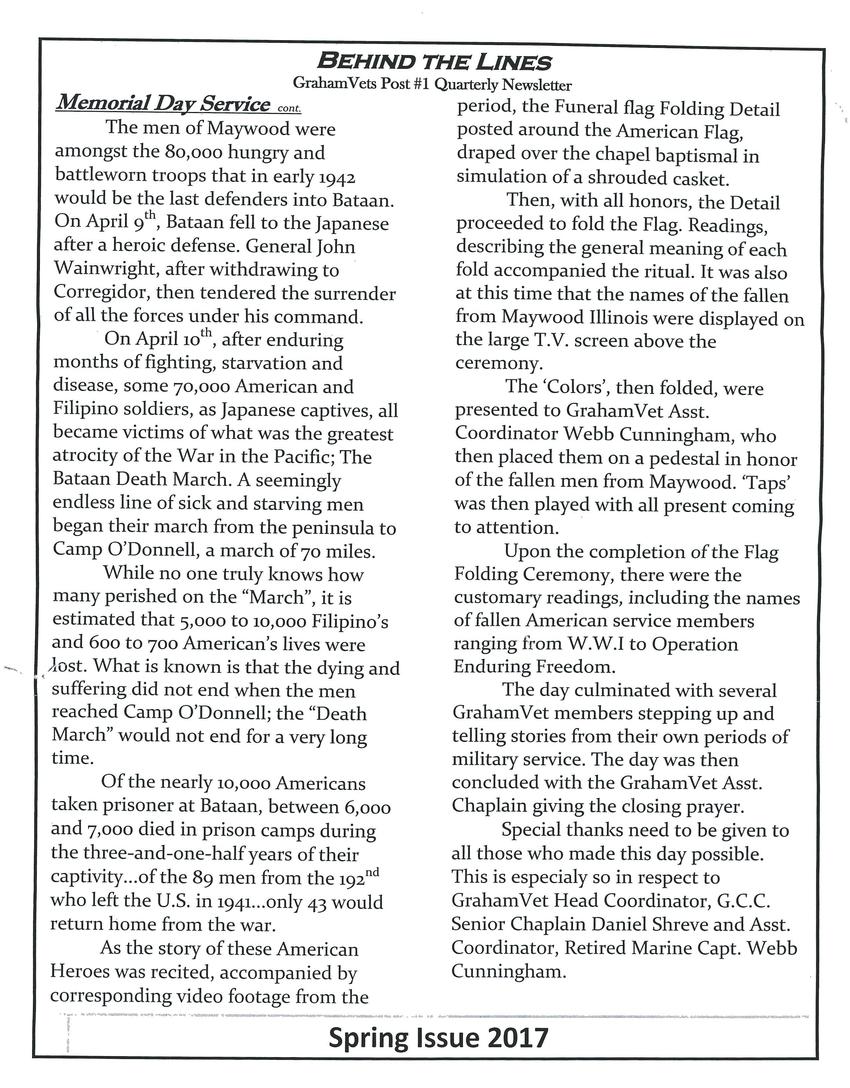 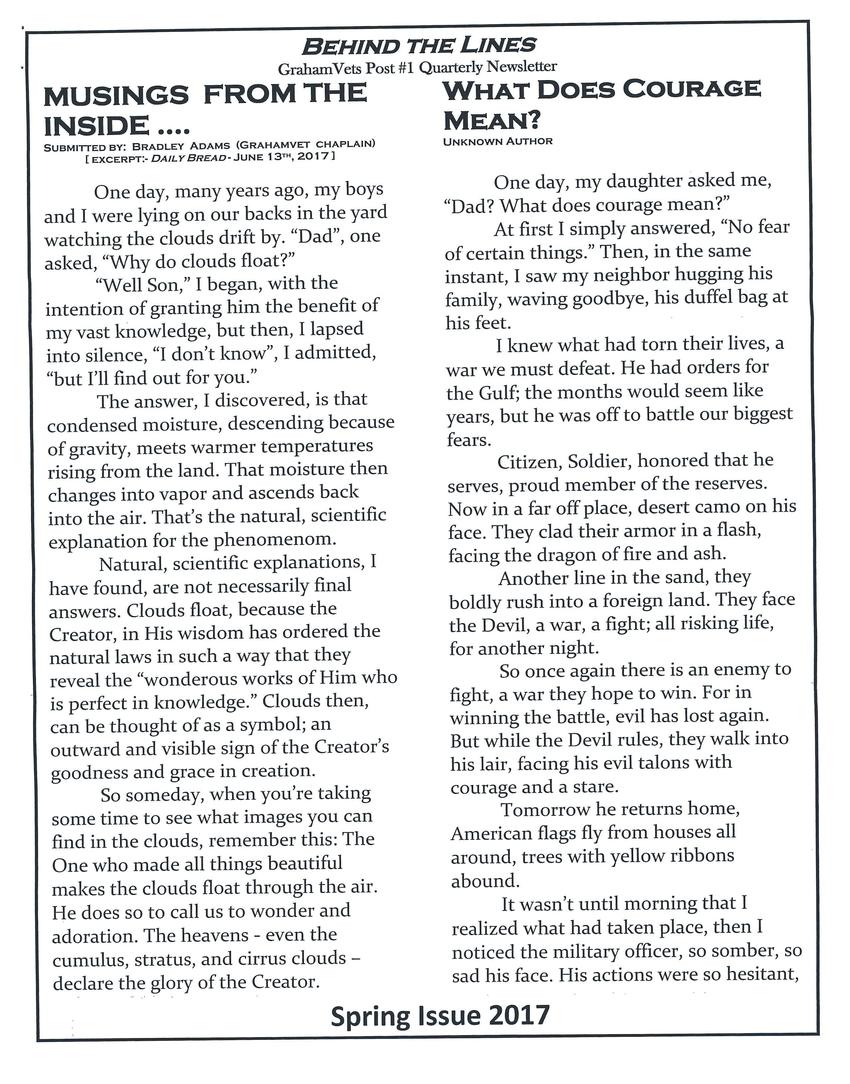 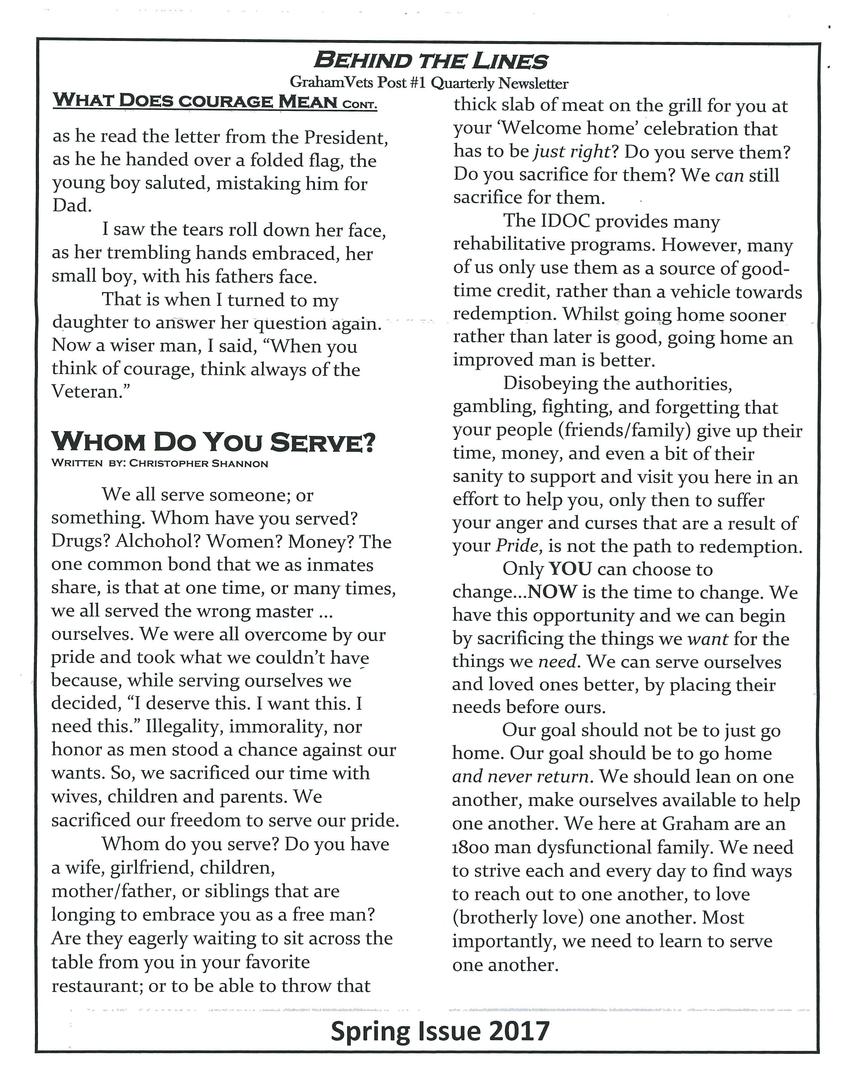 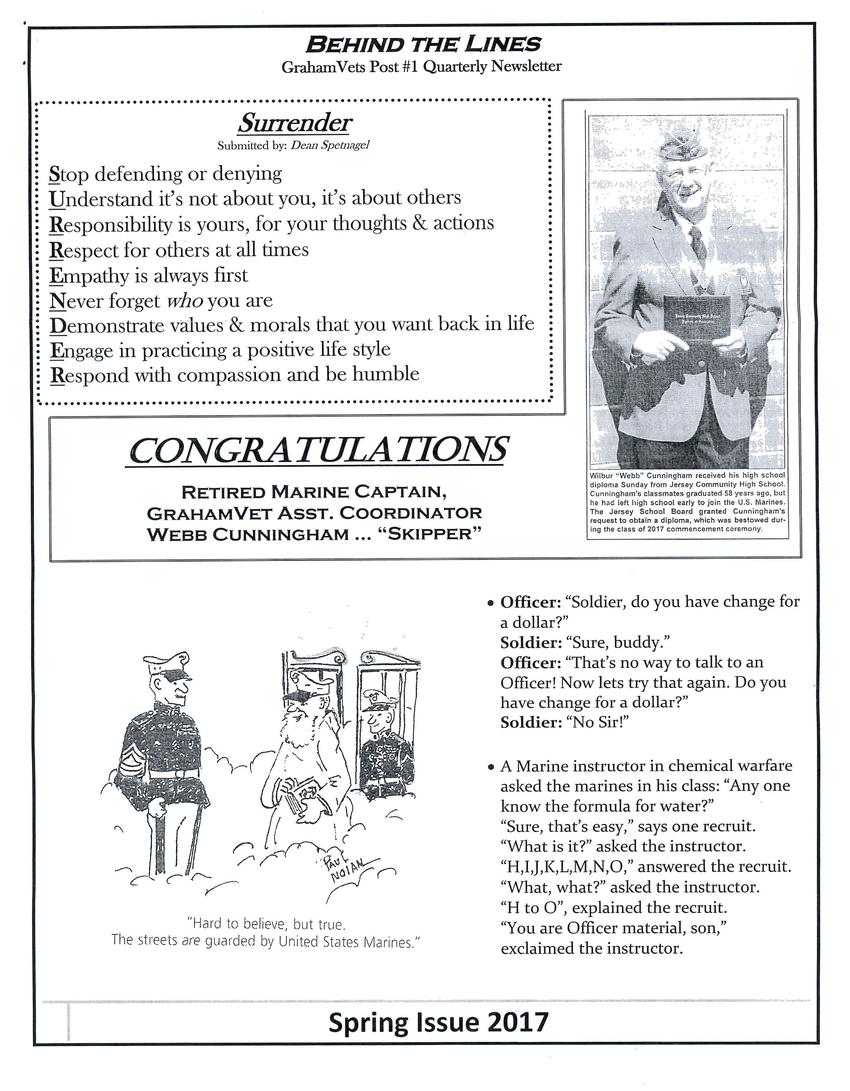 Enclosed is our recent newsletter on the GrahamVets. Hope it gets posted up.
Our veterans group has made great strides this year.
The greatest change in daily living is the improvement in diet. After decades of poisonous levels of "soy" in every food item served from milk, to bread, to chilli. After the harm suffered by incarcerated women and a class action law suit they filed; I.D.O.C. has eliminated most soy from our diets. What an incredible difference! They were literally poisoning and slowly crippling millions of citizens with this garbage. I thank God and all those who fought the good fight to correct such an inhumane action pressed upon those who could not fight for themselves.

On Tuesday, May 9th, the GrahamVets held their annual Memorial Day service. The day was kicked off with the posting of the "Colors", to coincide with a rousing rendition of "My Country 'Tis of Thee" by all in attendance. This was closely followed by the singing of the "Star Spangled Banner", the recitation of the Pledge of Allegiance, and the GrahamVet Creed. The GrahamVet Asst. Chaplain then concluded the opening ceremonies with a passionate prayer.
Honoring the GrahamVets, as the Guest speaker at this years Memorial Day proceedings, was retired Marine, Sgt.Maj. Lonnie Saffell. Sgt.Maj. Saffell spoke of his time spent in the service of our Nation, sharing humorous stories dating all the way back to his stepping off the bus at Marine 'Boot Camp'.
He also spoke of his faith and family, sharing that his sons, following in their father's footsteps, are currently serving or have served in our Nations Armed Forces. Sgt.Maj. Saffell was certainly a welcome guest to the members of GrahamVets, giving rise to an open invitation, from the membership, to return for a visit anytime he would like.
After the Sgt.Maj. spoke to the group, all in attendance sat down to share a meal and fellowship. Upon the completion of a quick clean-up, the program continued with the afternoon portion of ceremonies.
It had been decided at the previous Memorial Day service in 2016, that this year the GrahamVets would honor the 122 men of Maywood Illinois, that on the 25th November 1940, were inducted into active federal service as Company 'B' of the 192nd Tank Battalion. It was on that day that 122 men left the Maywood Armory and boarded a train for Fort Knox Kentucky to join the rest of their Battalion.

In October of 1941, after further training; and being equipped for travel overseas, 89 of the original Battalion group were deployed to the Philippine Islands. On November 20th they arrived in manila. It was Thanksgiving Day. Unknown to the men at the time was that in three short weeks, America would be at war.

GRAHAMVETS
Wishes to express their gratitude to the
Macoupin Baptist Association Carlinville, Illinois
For their assistance in the publication of this
newsletter.... Thank You!!

The men of Maywood were amongst the 80,000 hungry and battleworn troops that in early 1942 would be the last defenders into Bataan. On April 9th, Bataan fell to the Japanese after a heroic defense. General John Wainwright, after withdrawing to Corregidor, then tendered the surrender of all the forces under his command.
On April 10th, after enduring months of fighting, starvation and disease, some 70,000 American Filipino soldiers, as Japanese captives, all became victims of what was the greatest atrocity of the War in the Pacific; The Bataan Death March. A seemingly endless line of sick and starving men began their march from the peninsula to Camp O'Donnell, a march of 70 miles.
While no one truly knows how many perished on the "March", it is estimated that 5,000 to 10,000 Filipino's and 600 to 700 American's lives were lost. What is known is that the dying and suffering did not end when the men reached Camp O'Donnell; the "Death March" would not end for a very long time.
Of the nearly 10,000 Americans taken prisoner at Bataan, between 6,000 and 7,000 died in prison camps during the three-and-one-half years of their captivity...of the 89 men from the 192nd who left the U.S. in 1941...only 43 would return home from the war.
As from the story of these American Heroes was recited, accompanied by corresponding video footage from the period, the Funeral flag Folding Detail posting around the American Flag, draped over the chapel baptismal in simulation of a shrouded casket.
Then, with all honors, the Detail proceeded to fold the Flag. Readings, describing the general meaning of each fold accompanied the ritual. It was also at this time that the names of the fallen from Maywood Illinois were displayed on the large T.V. screen above the ceremony.
The 'Colors', then folded, were presented to GrahamVet Asst. Coordinator Webb Cunningham, who then placed them on a pedestal in honor of the fallen men from Maywood. 'Taps' was then played with all present coming to attention.
Upon the completion of the Flag Folding Ceremony, there were the customary readings, including the names of fallen American service members ranging from W.W.I to Operation Enduring Freedom.
The day culminated with several GrahamVet members stepping up and telling stories from their own periods of military service. The day was then concluded with the GrahamVet Asst. Chaplain giving the closing prayer.
Special thanks need to be given to all those who made this day possible. This is especially so in respect to GrahamVet Head Coordinator, G.C.C. Senior Chaplain Daniel Shreve and Asst. Coordinator, Retired Marine Capt. Webb Cunningham.

One day, many years ago, my boys and I were lying on our backs in the yard watching the clouds drift by. "Dad", one asked, "Why do clouds float?"
"Well Son," I began, with the intention of granting him the benefit of my vast knowledge, but then, I lapsed into silence, "I don't know", I admitted, "but I'll find out for you."
The answer, I discovered, is that condensed moisture, descending because of gravity, meets warmer temperatures rising from the land. That moisture then changes into vapor and ascends back into the air. That's the natural, scientific explanation for the phenomenon.
Natural, scientific explanations, I have found, are not necessarily final answers. Clouds float, because the Creator, in His wisdom has ordered the natural laws in such a way that they reveal the "wonderous works of Him who is perfect in knowledge." Clouds then, can be thought of as a symbol; an outward and visible sign of the Creator's goodness and grace in creation.
So someday, when you're taking some time to see what images you can find in the clouds, remember this: The One who made all things beautiful makes the clouds float through the air. He does so to call us to wonder and adoration. The heavens - even the cumulus, stratus, and cirrus clouds - declare the glory of the Creator.

WHAT DOES COURAGE MEAN?
UNKNOWN AUTHOR

One day, my daughter asked me, "Dad? What does courage mean?"
At first I simply answered, "No fear of certain things." Then, in the same instant, I saw my neighbour hugging his family, waving goodbye, his duffel bag at his feet.
I knew what had torn their lives, a war we must defeat. He had orders for the Gulf; the months would seem like years, but he was off to battle our biggest fears.
Citizen, Soldier, honoured that he serves, proud member of the reserves. Now in a far off place, desert camo on his face. They clad their armor in a flash, facing the dragon of fire and ash.
Another line in the sand, they boldly rush into a foreign land. They face the Devil, a war, a fight; all risking life, for another night.
So once again there is an enemy to fight, a war they hope to win. For in winning the battle, evil has lost again. But while the Devil rules, they walk into his lair, facing his evil talons with courage and a stare.
Tomorrow he returns home, American flags fly from houses all around, trees with yellow ribbons abound.
It wasn't until morning that I realized what had taken place, then I noticed the military officer, so somber, so sad his face. His action were so hesitant,

WHAT DOES COURAGE MEAN CONT.

as he read the letter from the President, as he handed over a folded flag, the young boy saluted, mistaking him for Dad.
I saw the tears roll down her face, as her trembling hands embraced, her small boy, with his fathers face.
That is when I turned to my daughter to answer her question again. Now a wiser man, I said, "When you think of courage, think always of the Veteran."

WHOM DO YOU SERVE?
WRITTEN BY: CHRISTOPHER SHANNON

We all serve someone; or something. Whom have you served? Drugs? Alcohol? Women? Money? The one common bond that we as inmates share, is that at one time, or many times, we all served the wrong master ... ourselves. We were all overcome by our pride and took what we couldn't have because, while serving ourselves we decided, "I deserve this. I want this. I need this." Illegality, immorality, nor honor as men stood a chance against our wants. So, we sacrificed our freedom to serve our pride.
Whom do you serve? Do you have a wife, girlfriend, children, mother/father, or siblings that are longing to embrace you as a free man?
Are they eagerly waiting to sit across the table from you in your favourite restaurant; or to be able to throw that thick slab of meat on the grill for you at your 'Welcome home' celebration that has to be just right? Do you serve them? Do you sacrifice for them? We can still sacrifice for them.
The IDOC provides many rehabilitative programs. However, many of us only use them as a source of good-time credit, rather than a vehicle towards redemption. Whilst going home sooner rather than later is good, going home an improved man is better.
Disobeying the authorities, gambling, fighting, and forgetting that your people (friends/family) give up their time, money, and even a bit of their sanity to support and visit you here in an effort to help you, only then to suffer your anger and curses that are a result of your Pride, is not the path to redemption.
Only YOU can choose to change...NOW is the time to change. We have this opportunity and we can begin by sacrificing the things we want for the things we need. We can serve ourselves and loved ones better, by placing their needs before ours.
Our goal should not be to just go home. Our goal should be to go home and never return. We should lean on one another, make ourselves available to help one another. We here at Graham are an 1800 man dysfunctional family. We need to strive each and every day to find ways to reach out to one another, to love (brotherly love) one another. Most importantly, we need to learn to serve one another.

Stop defending or denying
Understand it's not about you, it's about others
Responsibility is yours, for your thoughts & actions
Respect for others at all times
Empathy is always first
Never forget who you are
Demonstrate values & morals that you want back in life
Engage in practicing a positive life style
Respond with compassion and be humble

[image with caption:]
Wilbur "Webb" Cunningham received his high school diploma Sunday from Jersey Community High School. Cunningham's classmates graduated 58 years go, but he had left high school early to join the U.S. Marines. The Jersey School Board granted Cunningham's request to obtain a diploma, which was bestowed during the class of 2017 commencement ceremony.

- A Marine instructor in chemical warfare asked the marines in his class: "Any one know the formula for water?"
"Sure, that's easy," says one recruit.
"What is it?" asked the instructor.
"H,I,J,K,L,M,N,O," answered the recruit