A Note From Up The Creek... 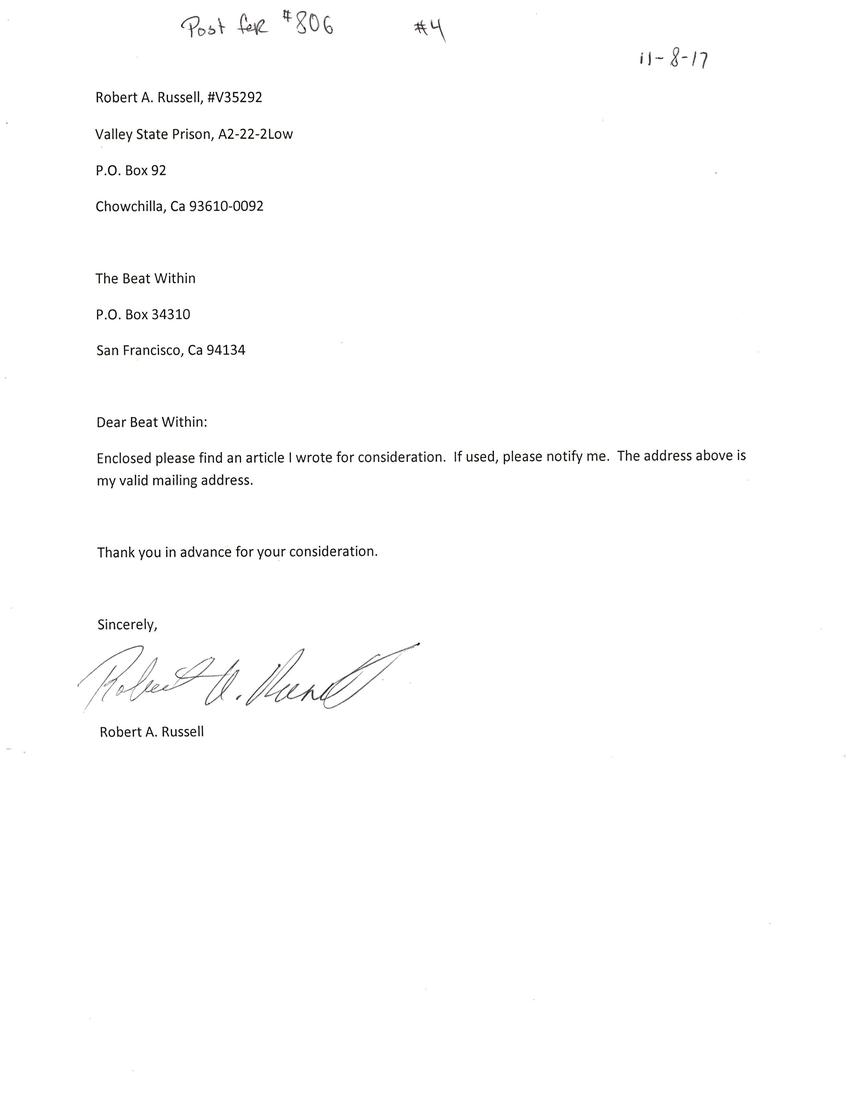 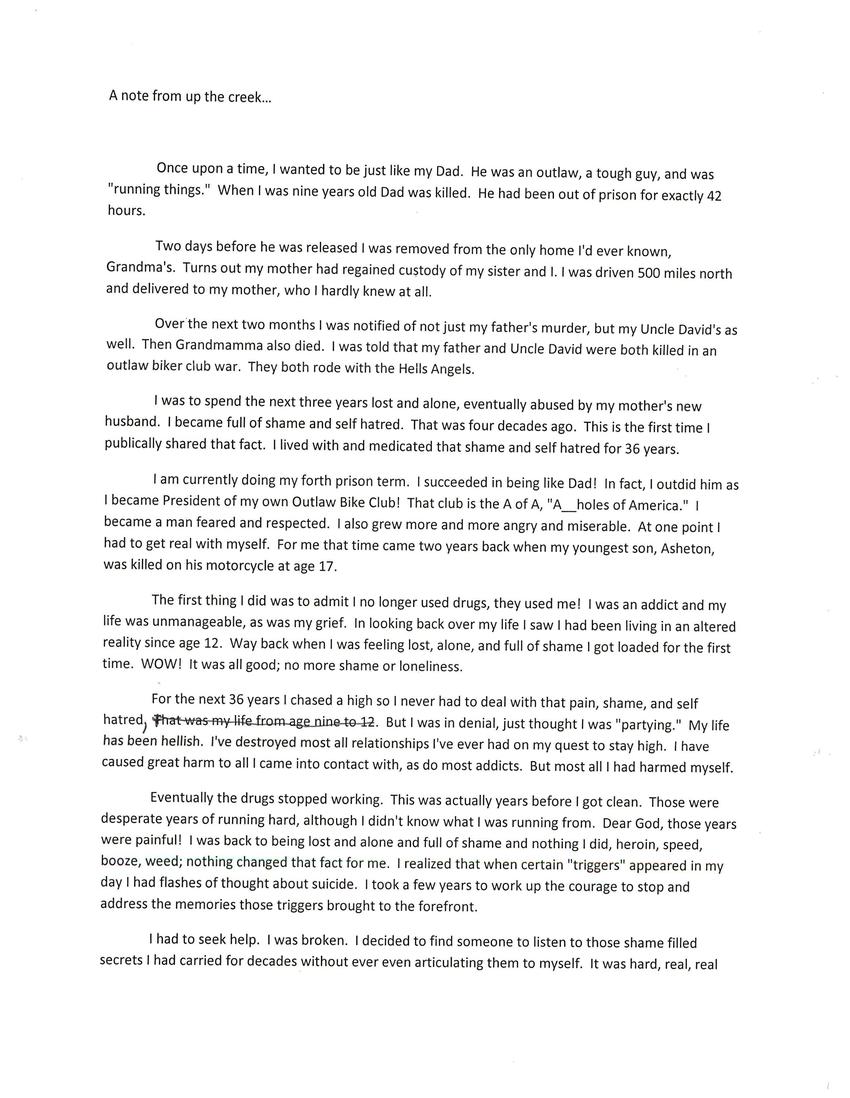 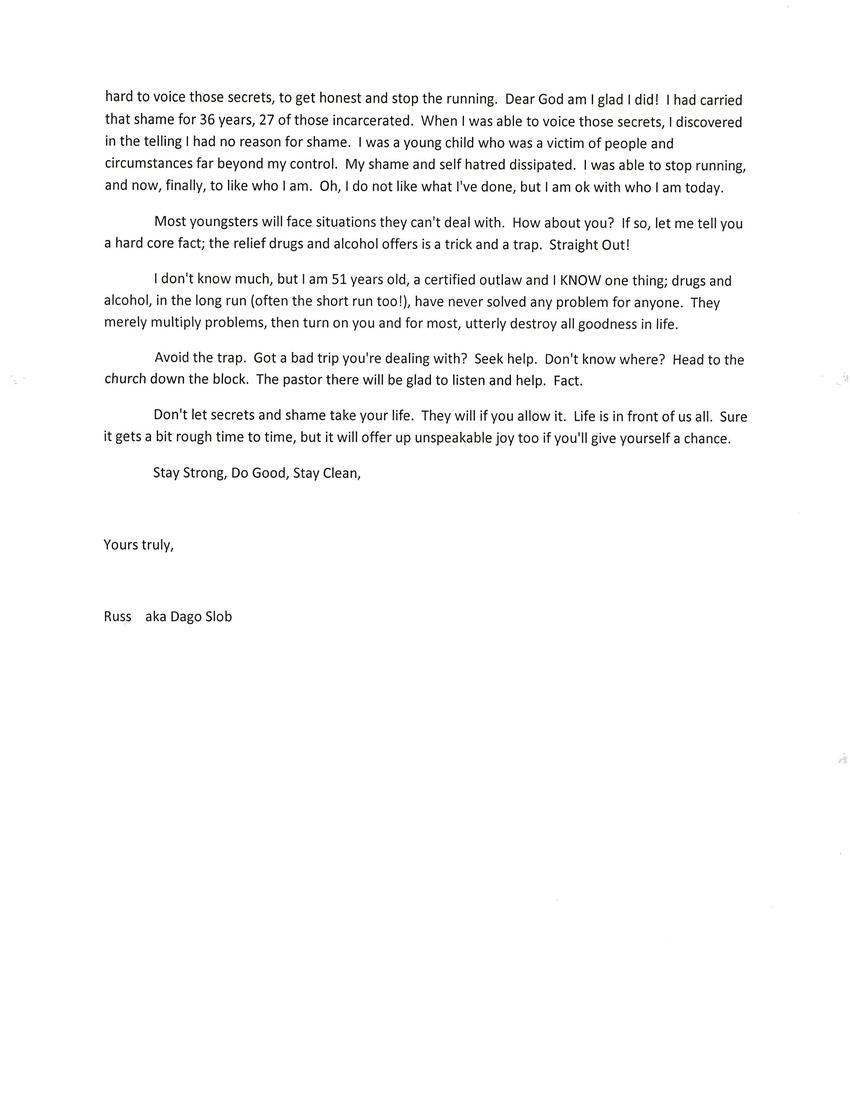 Dear Beat Within:
Please find an article I wrote for consideration enclosed. If used, please notify me. The address above is my valid mailing address.

Thank you in advance for your consideration.

A Note From Up The Creek...
Once upon a time, I wanted to be just like my dad. He was an outlaw, a tough guy, and was "running things." When I was nine years old, Dad was killed. He had been out of prison for exactly 42 hours.

Two days before he was released, I was removed from the only home I'd ever known: Grandma's. Turns out my mother had regained custody of me and my sister. I was driven 500 miles north and delivered to my mother, who I hardly knew at all. Over the next two months, I was notified of not just my father's murder but my Uncle David's as well. Then Grandmamma also died. I was told that my father and Uncle David were both killed in an outlaw biker club war. They both rode with the Hell's Angels.

I was to spend the next three years lost and alone, eventually abused by my mother's new husband. I became full of shame and self-hatred. That was four decades ago. This is the first time I have publicly shared that fact. I lived with and medicated that shame and self-hatred for 36 years.

I am currently doing my fourth prison term. I succeeded in being like Dad! In fact, I outdid him as I became president of my own outlaw bike club! That club is the A of A, A__holes of America. I became a man feared and respected. I also grew more and more angry and miserable.

At one point, I had to get real with myself. For me, that time came two years back when my youngest son, Asheton, was killed on his motorcycle at age 17.

The first thing I did was admit that I no longer used drugs, they used me! I was an addict and my life was unmanageable, as was my grief. Looking back over my life, I saw I had been living in an altered reality since age 12. Way back when I was feeling lost, alone, and full of shame, I got loaded for the first time. WOW! It was all good, no more shame nor loneliness. For the next 36 years, I chased a high so I never had to deal with that pain, shame, and self-hatred.

But I was in denial, just thought I was "partying." My life has been hellish. I've destroyed most all relationships I've ever had on my quest to stay high. I have caused great harm to all I came to contact with, as do most addicts. But most of all, I hated myself.

Eventually, the drugs stopped working. This was actually years before I got clean. Those were desperate years of running hard, although I didn't know what I was running from. Dear God, those years were painful! I was back to being lost and full of shame, and nothing I did (heroin, speed, booze, weed), nothing changed that fact for me. I realized that when certain triggers appeared in my day, I had thoughts about suicide.

I took a few years to work up the courage to stop and address the memories those triggers brought to the forefront. I had to seek help. I was broken. I decided to find someone to listen to those shame-filled secrets I had carried for decades without ever even articulating them to myself. It was hard, real, real, hard to voice those secrets, to get honest, and stop the running.

Dear God am I glad I did! I had carried that shame for 36 years, 27 of those being incarcerated. When I was able to voice those secrets, I discovered I had no shame in telling them. I was a young child who was a victim of people and circumstance far beyond my control. My shame and self-hatred dissipated. I was able to stop running. Now, I finally like who I am. Oh, I do not like what I've done, but I'm okay with who I am today.

Most youngsters will face situations they can't deal with. How about you? If so, let me tell you a hardcore fact: The relief drugs and alcohol offers is a trick and a trap. Straight out!

I don't know much, but I am 51 years old, a certified outlaw. I KNOW one thing: Drugs and alcohol in the long run (often the short run too!) have never solved any problems for anyone. They merely multiply problems, then turn on you, and for most, utterly destroy all goodness in life.

Avoid the trap. Got a bad trip you're dealing with? Seek help. Don't know where? Head to the church down the block. The pastor there will be glad to listen and help. Fact.

Don't let secrets and shame take your life. They will if you allow it. Life is in front of us all. Sure, it gets a bit rough time to time, but it will offer up unspeakable joy too, if you'll give yourself a chance.

Yours truly,
Russ
AKA Dago Slob