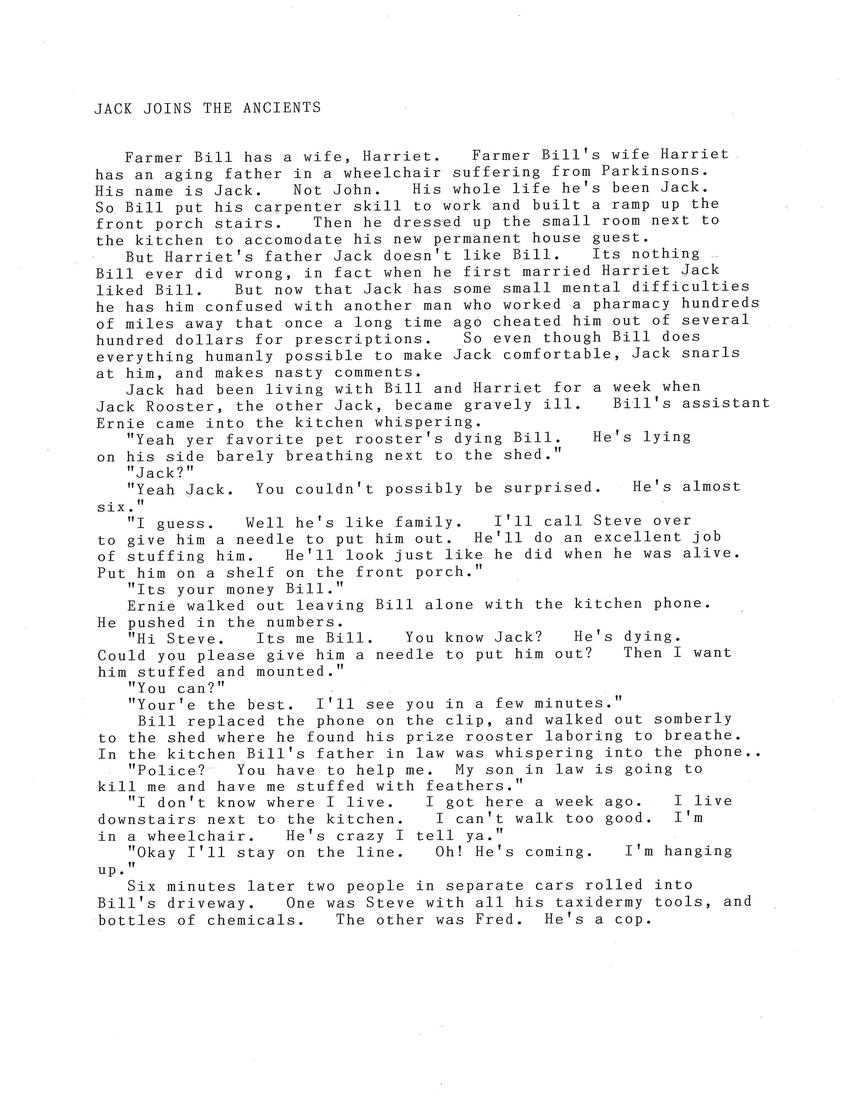 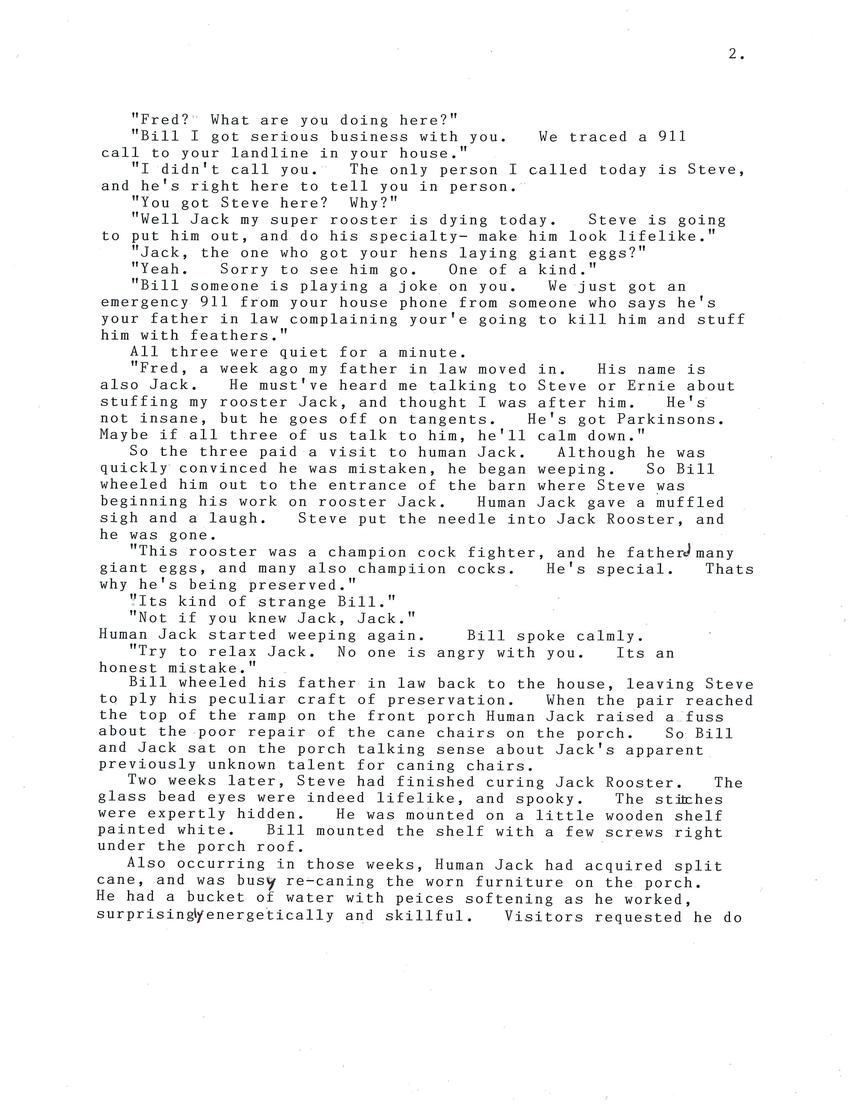 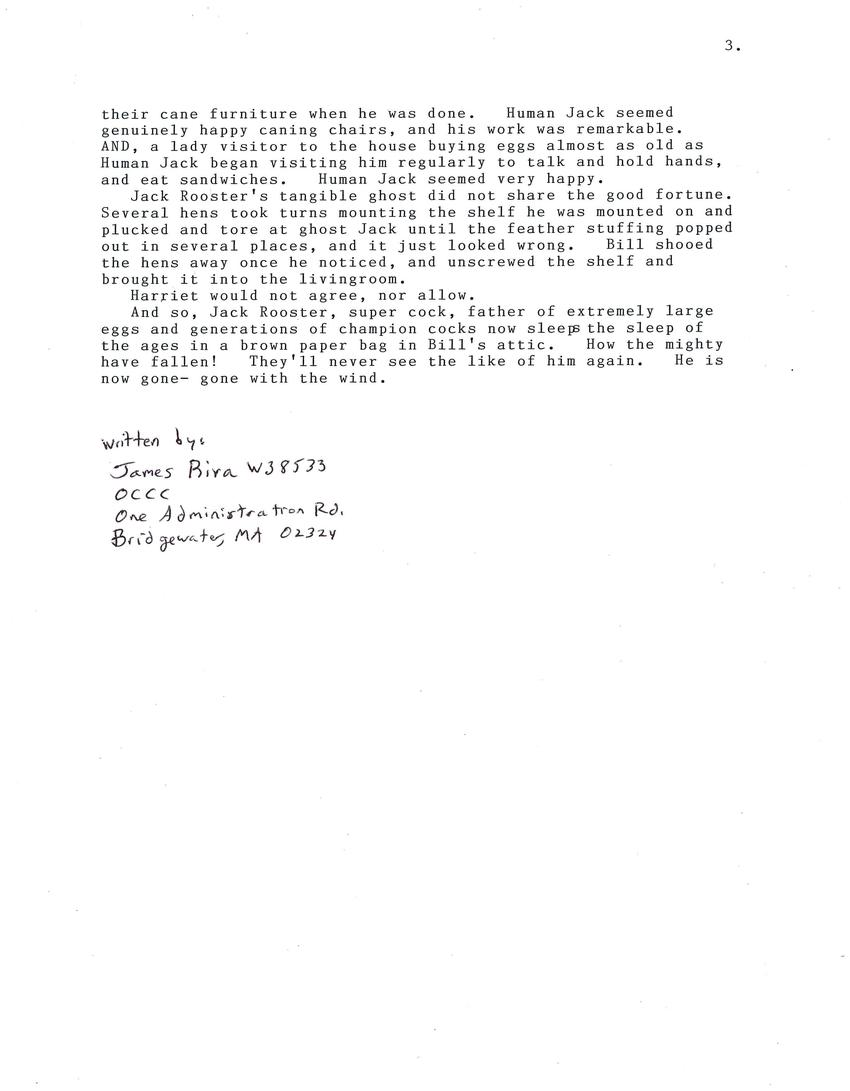 Farmer Bill has a wife, Harriet. Farmer Bill's wife, Harriet, has an aging father in a wheelchair suffering from Parkinsons. His name is Jack. Not John. His whole life, he's been Jack. So Bill put his carpenter skills to work and built a ramp up to the front porch stairs. Then he dressed up the small room next to the kitchen to accommodate his new permanent house guest.

But Harriet's father, Jack, doesn't like Bill. It's nothing Bill ever did wrong; in fact, when he first married Harriet, Jack liked Bill. But now that Jack has some small mental difficulties, he has him confused with another man who worked a pharmacy hundreds of miles away who once, a long time ago, cheated him out of several hundred dollars for prescriptions. So even though Bill does everything humanely possible to make Jack comfortable, Jack snarls at him and makes nasty comments.

Jack had been living with Bill and Harriet for a week when Jack Rooster, the other Jack, became gravely ill. Bill's assistant, Ernie, came into the kitchen whispering.

"Yeah, yer favorite pet rooster's dying, Bill. He's lying on his side barely breathing next to the shed."
"Jack?"
"Yeah, Jack. You couldn't possibly be surprised. He's almost six."
"I guess. Well, he's like family. I'll call Steve over to give him a needle to put him out. He'll do an excellent job of stuffing him. He'll look just like he did when he was alive. Put him on a shelf on the front porch."
"It's your money, Bill."

Ernie walked out, leaving Bill alone with the kitchen phone. He pushed in the numbers.

"Hi, Steve. It's me, Bill. You know Jack? He's dying. Could you please give him a needle to put him out? Then I want him stuffed and mounted."
"You can?"
"You're the best. I'll see you in a few minutes."

Bill replaced the phone on the clip and somberly walked out to the shed where he found his prize rooster laboring to breathe. In the kitchen, Bill's father-in-law was whispering into the phone.

"Police? You have to help me. My son-in-law is going to kill me and have me stuffed with feathers."
"I don't know where I live. I got here a week ago. I live downstairs next to the kitchen. I can't walk too good. I'm in a wheelchair. He's crazy I tell ya."
"Okay, I'll stay on the line. Oh! He's coming. I'm hanging up."

Six minutes later, two people in separate cars rolled into Bill's driveway. One was Steve with all his taxidermy tools and bottles of chemicals. The other was Fred. He's a cop.

"Fred? What are you doing here?"
"Bill, I got serious business with you. We traced a 911 call to your landline in your house."
"I didn't call you. The only person I called today is Steve, and he's right here to tell you in person."
"You got Steve here? Why?"
"Well, Jack, my super rooster, is dying today. Steve is going to put him out and do his specialty: make him look lifelike."
"Jack, the one who got your hens laying giant eggs?"
"Yeah. Sorry to see him go. One of a kind."
"Bill, someone is playing a joke on you. We just got an emergency 911 from your home phone from someone who says he's your father-in-law complaining that you're going to kill him and stuff him with feathers."

All three were quiet for a minute.

"Fred, a week ago my father-in-law moved in. His name is also Jack. He must've heard me talking to Steve or Ernie about stuffing my rooster, Jack, and thought I was after him. He's not insane, but he goes off on tangents. He's got Parkinsons. Maybe if all three of us talk to him, he'll calm down."

So the three of them paid a visit to human Jack. Although he was quickly convinced he was mistaken, he began weeping. So Bill wheeled him out to the entrance of the barn where Steve was beginning his work on rooster Jack. Human Jack gave a muffled sigh and a laugh. Steve put the needle into Jack rooster and he was gone.

"This rooster was a champion cock fighter, and he fathered many giant eggs and many champion cocks. He's special. That's why he's being preserved."
"It's kind of strange, Bill."
"Not if you knew Jack, Jack."

"Try to relax, Jack. No one is angry with you. It's an honest mistake."

Bill wheeled his father-in-law back to the house, leaving Steve to ply his peculiar craft of preservation. When the pair reached the top of the ramp on the front porch, human Jack raised a fuss about the poor repair of the cane chairs on the porch. So Bill and Jack sat on the porch talking sense about Jack's apparent previously unknown talent for caning chairs.

Two weeks later, Steve had finished curing rooster Jack. The glass bead eyes were indeed lifelike, and spooky. The stitches were expertly hidden. He was mounted on a little wooden shelf painted white. Bill mounted the shelf with a few screws right under the porch roof.

Also during those weeks, human Jack had acquired split cane and was busy re-caning the worn furniture on the porch. He had a bucket of water with pieces softening as he worked, surprisingly energetic and skillful. Visitors requested he do their cane furniture when he was done. Human Jack seemed genuinely happy caning chairs, and his work was remarkable. And a lady visitor to the house who was buying eggs and almost as old as human Jack began visiting him regularly to talk and hold hands and eat sandwiches. Human Jack seemed very happy.

Rooster Jack's tangible ghost did not share the good fortune. Several hens took turns mounting the shelf he was mounted on and plucked and tore at ghost Jack until the feather stuffing popped out in several places. It just looked wrong. Bill shooed the hens away once he noticed and unscrewed the shelf. He brought it into the living room.

Harriet would not agree nor allow it.

And so rooster Jack, super cock, father of extremely large eggs, and generations of champion cocks now sleeps the sleep of the ages in a brown paper bag in Bill's attic. How the might have fallen! They'll never see the likes of him again. He is gone—gone with the wind.

Great story, I enjoyed the read.
haha! that was funny. You've got a real talent at painting the picture with your words. Keep writing! You're great.
(scanned reply – view as blog post)
uploaded Jan. 27, 2019.  Original (PDF) 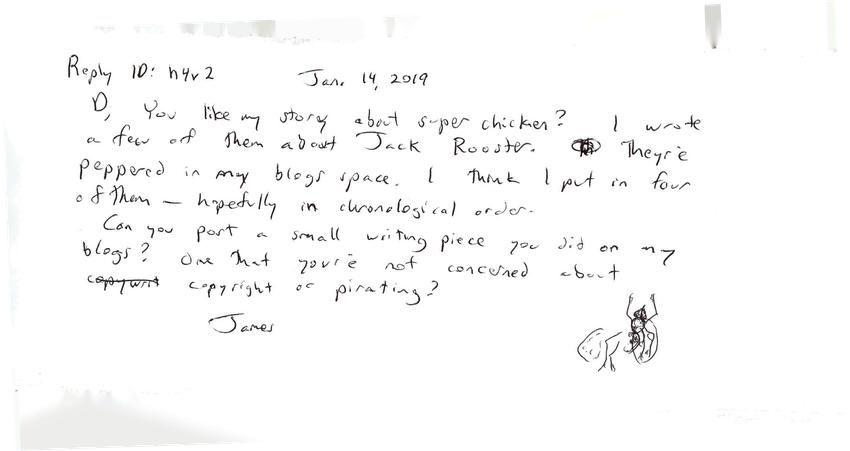