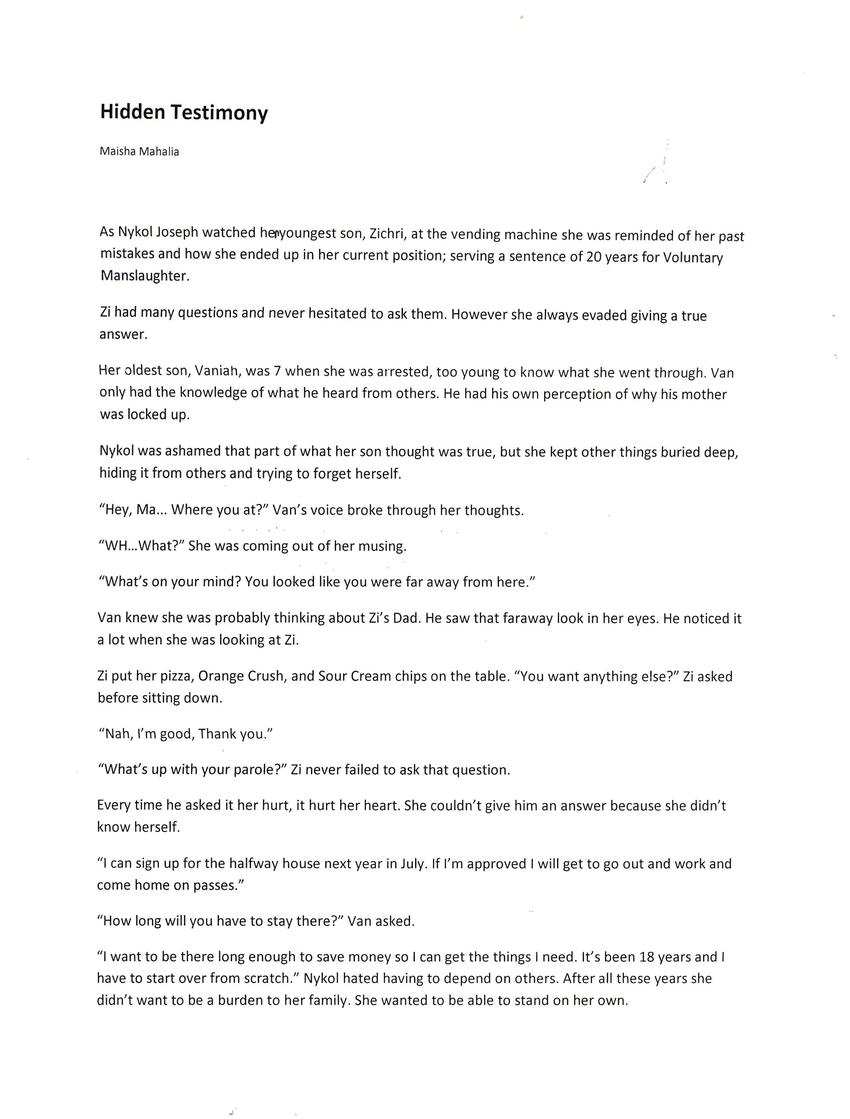 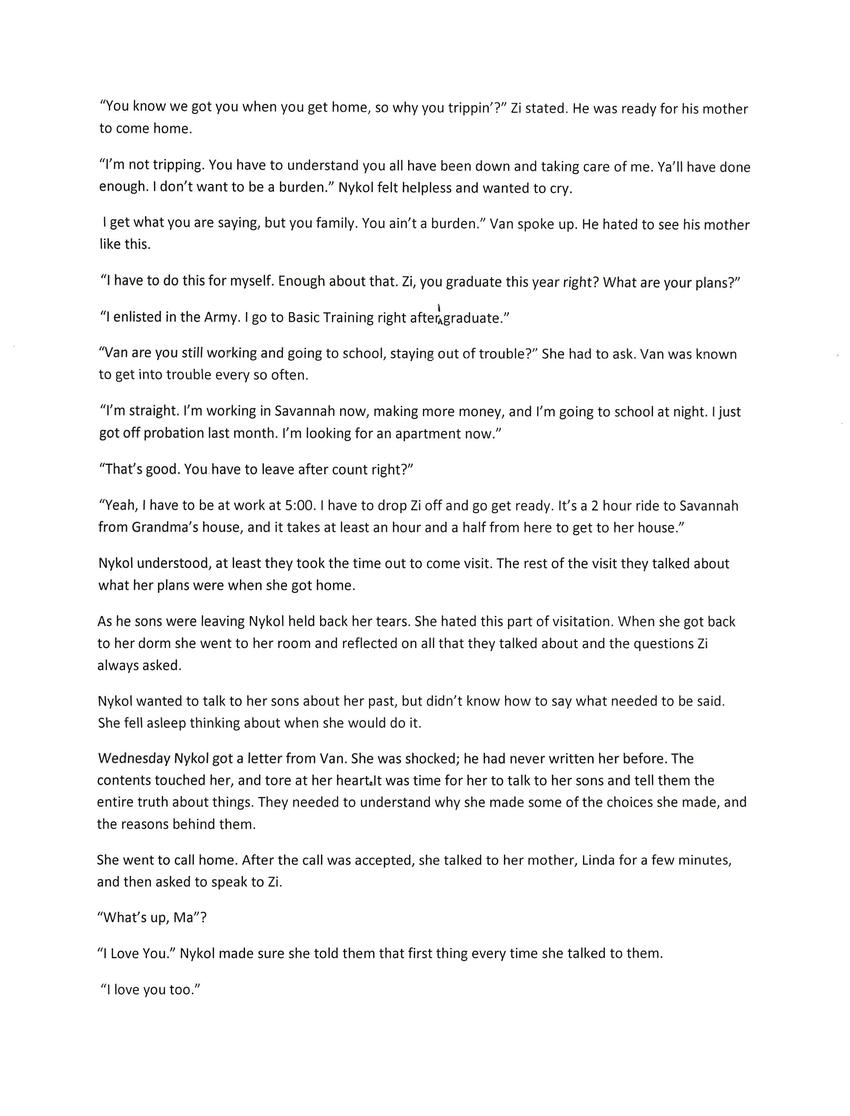 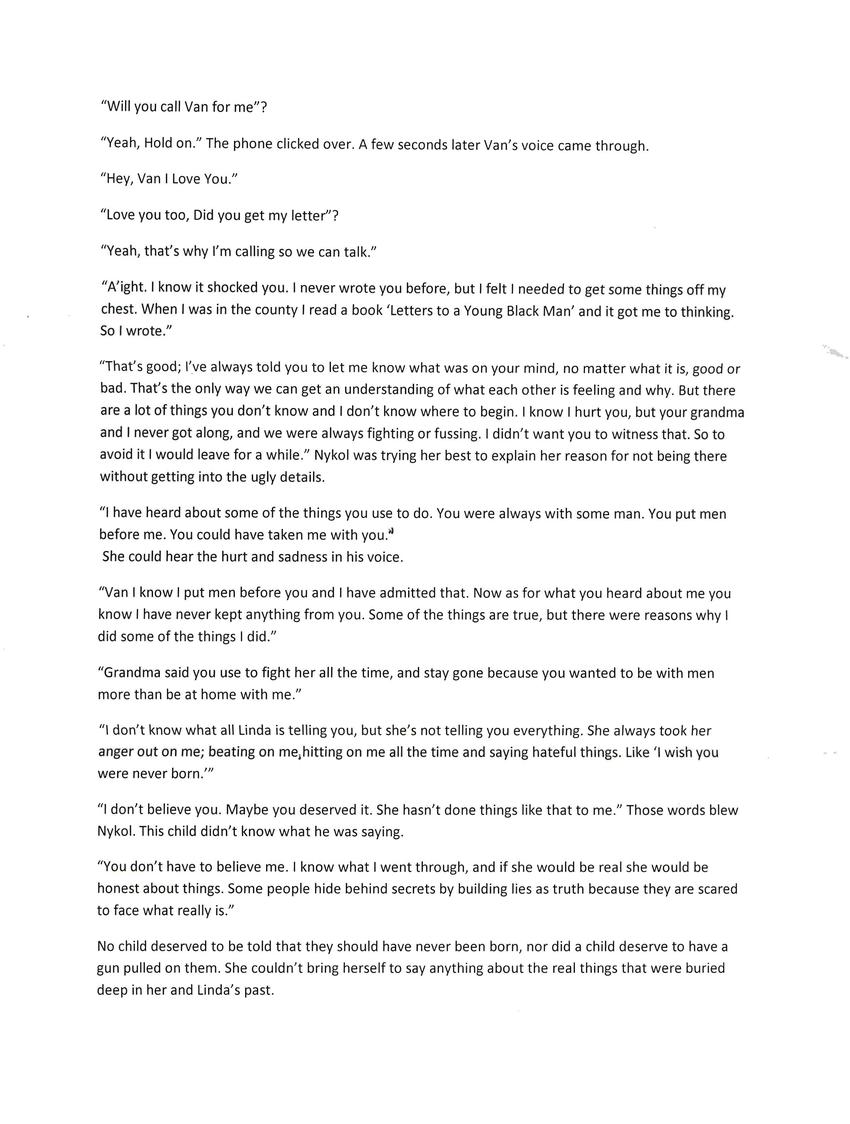 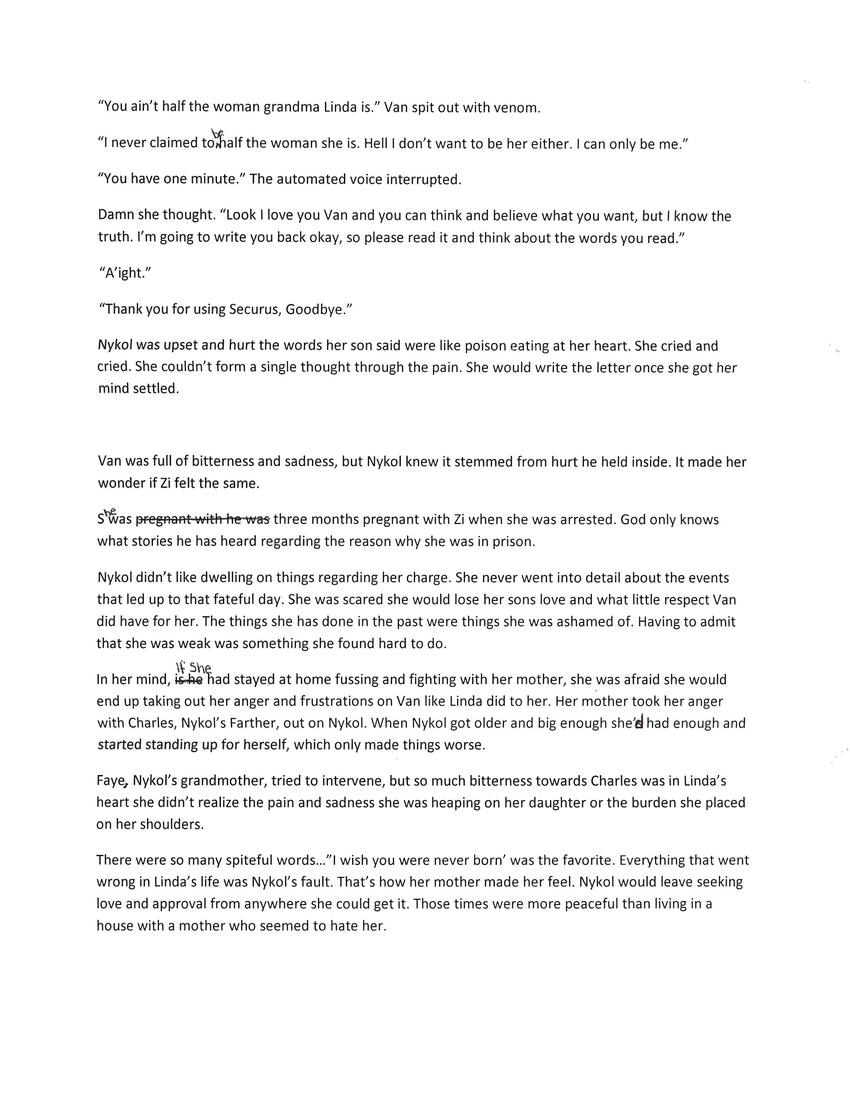 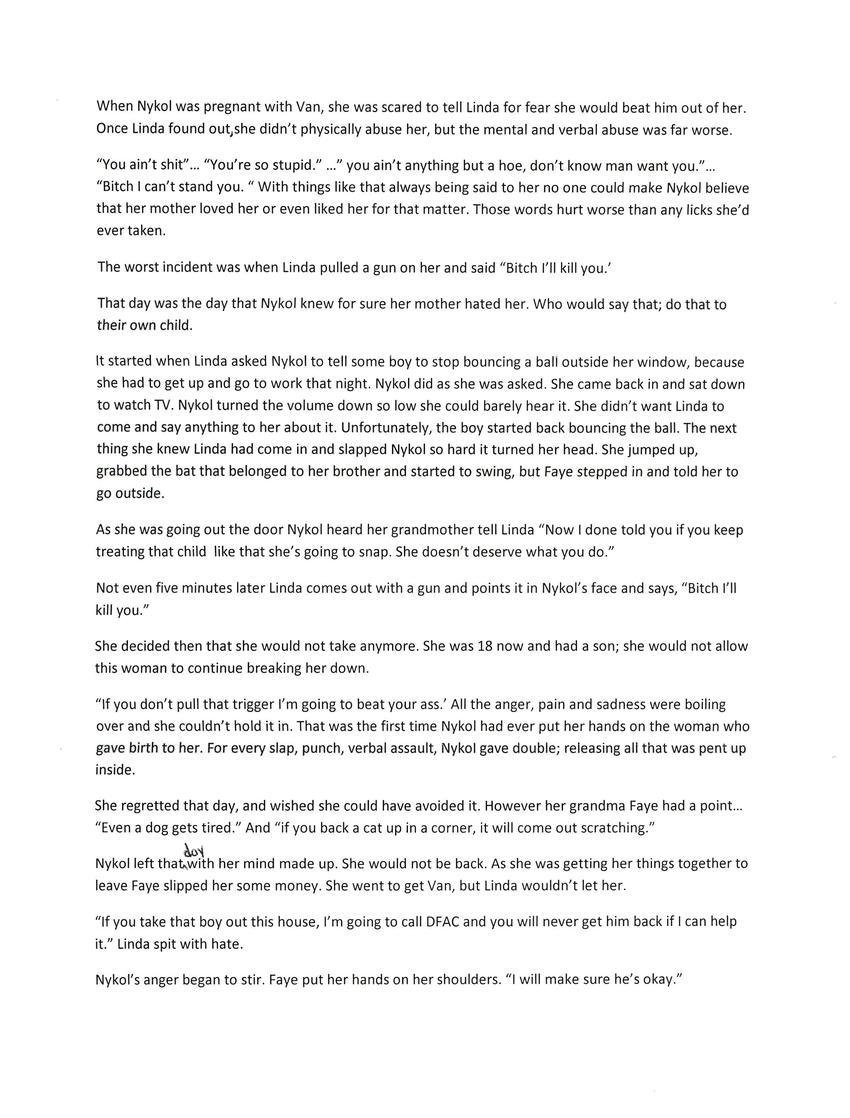 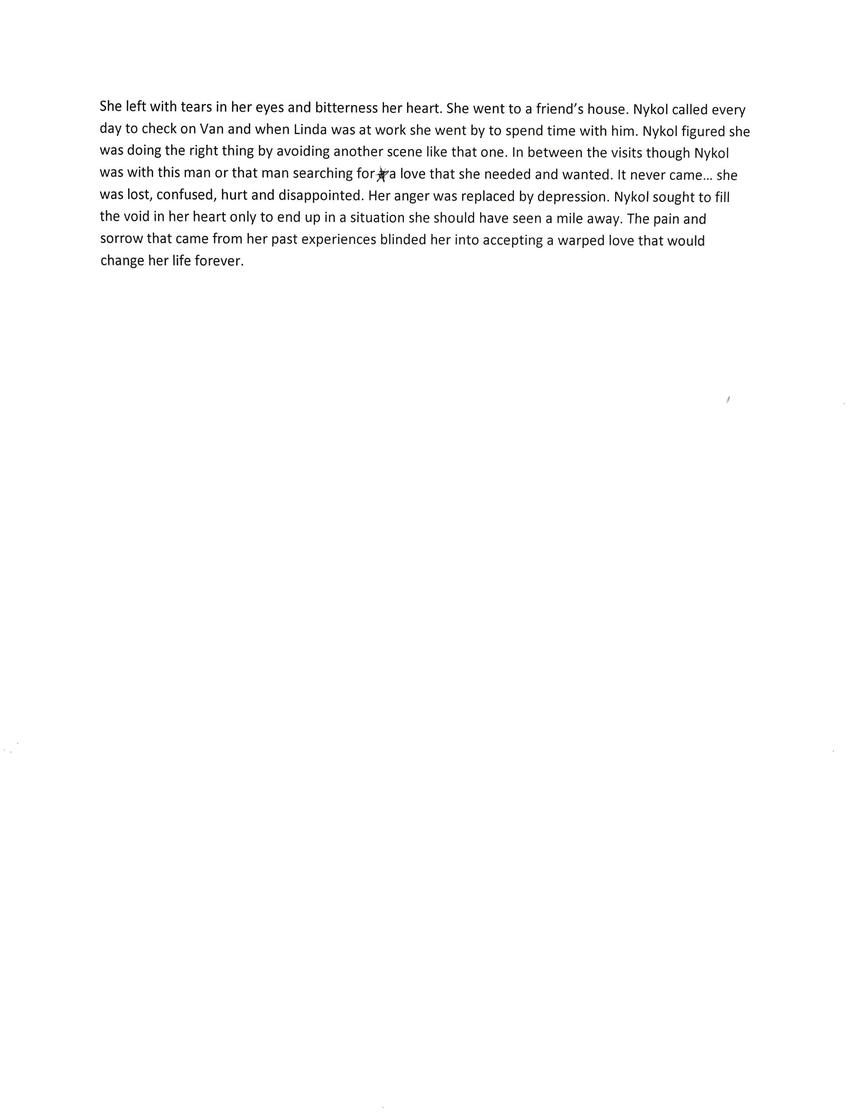 As Nykol Joseph watched her youngest son, Zichri, at the vending machine she was reminded of her past mistakes and how she ended up in her current position; serving a sentence of 20 years for Voluntary Manslaughter.

Zi had many questions and never hesitated to ask them. However she always evaded giving a true answer.

Her oldest son, Vaniah, was 7 when she was arrested, too young to know what she went through. Van only had the knowledge of what he heard from others. He had his own perception of why his mother was locked up.

Nykol was ashamed that part of what her son thought was true, but she kept other things buried deep, hiding it from others and trying to forget herself.

"Hey, Ma... Where you at?" Van's voice broke through her thoughts.

"What's on your mind? You looked like you were far away from here."

Van knew she was probably thinking about Zi's Dad. He saw that faraway look in her eyes. He noticed it a lot when she was looking at Zi.

Zi put her pizza, Orange Crush, and Sour Cream chips on the table. "You want anything else?" Zi asked before sitting down.

"What's up with your parole?" Zi never failed to ask that question.

Every time he asked it her hurt, it hurt her heart. She couldn't give him an answer because she didn't know herself.

"I can sign up for the halfway house next year in July. If I'm approved I will get to go out and work and come home on passes."

"How long will you have to stay there?" Van asked.

"I want to be there long enough to save money so I can get the things I need. It's been 18 years and I have to start over from scratch." Nykol hated having to depend on others. After all these years she didn't want to be a burden to her family. She wanted to be able to stand on her own.

"You know we got you when you get home, so why you trippin'?" Zi stated. He was ready for his mother to come home.

"I'm not tripping. You have to understand you all have been down and taking care of me. Ya'll have done enough. I don't want to be a burden." Nykol felt helpless and wanted to cry.

I get what you are saying, but you family. You ain't a burden." Van spoke up. He hated to see his mother like this.

"I have to do this for myself. Enough about that. Zi, you graduate this year right? What are your plans?"

"I enlisted in the Army. I go to Basic Training right after I graduate."

"Van are you still working and going to school, staying out of trouble?" She had to ask. Van was known to get into troble every so often.

"I'm straight. I'm working in Savannah now, making more money, and I'm going to school at night. I just got off probation last month. I'm looking for an apartment now."

"That's good. You have to leave after count right?"

"Yeah, I have to be at work at 5:00. I have to drop Zi off and go get ready. It's a 2 hour ride to Savannah from Grandma's house, and it takes at least an hour and a half from here to get to her house."

Nykol understood, at least they took the time out to come visit. The rest of the visit they talked about what her plans were when she got home.

As her sons were leaving Nykol held back her tears. She hated this part of visitation. When she got back to her dorm she went to her room and reflected on all that they talked about and the question Zi always asked.

Nykol wanted to talk to her sons about her past, but didn't know how to say what needed to be said. She fell asleep thinking about when she would do it.

Wednesday Nykol got a letter from Van. She was shocked; he had never written her before. The contents touched her, and tore at her heart. It was time for her to talk to her sons and tell them the entire truth about things. They needed to understand why she made some of the choices she made, and the reasons behind them.

She went to call home. After the call was accepted, she talked to her mother, Linda for a few minutes, and then asked to speak to Zi.

"I Love You." Nykol made sure she told them that first thing every time she talked to them.

"Will you call Van for me"?

"Yeah, Hold on." The phone clicked over. A few seconds later Van's voice came through.

"Love you too, Did you get my letter"?

"A'ight. I know it shocked you. I never wrote you before,