An Example Of Myth = Justice In America's Court 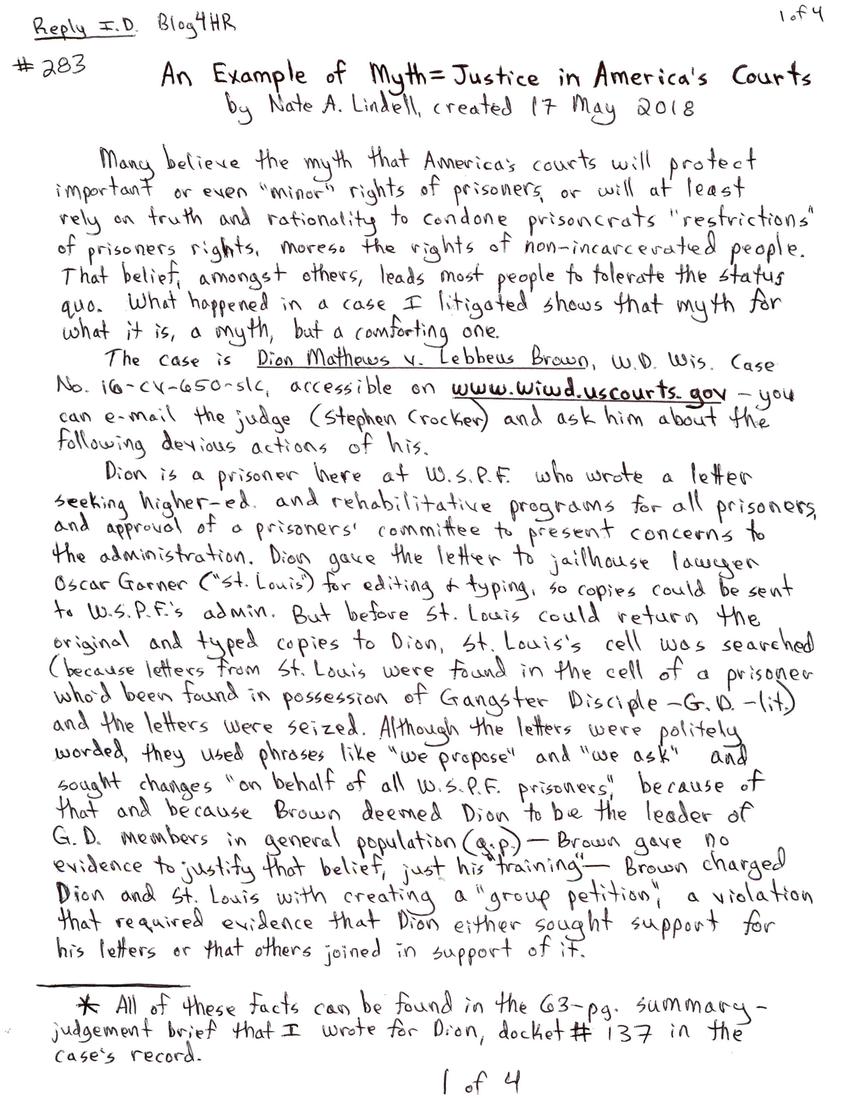 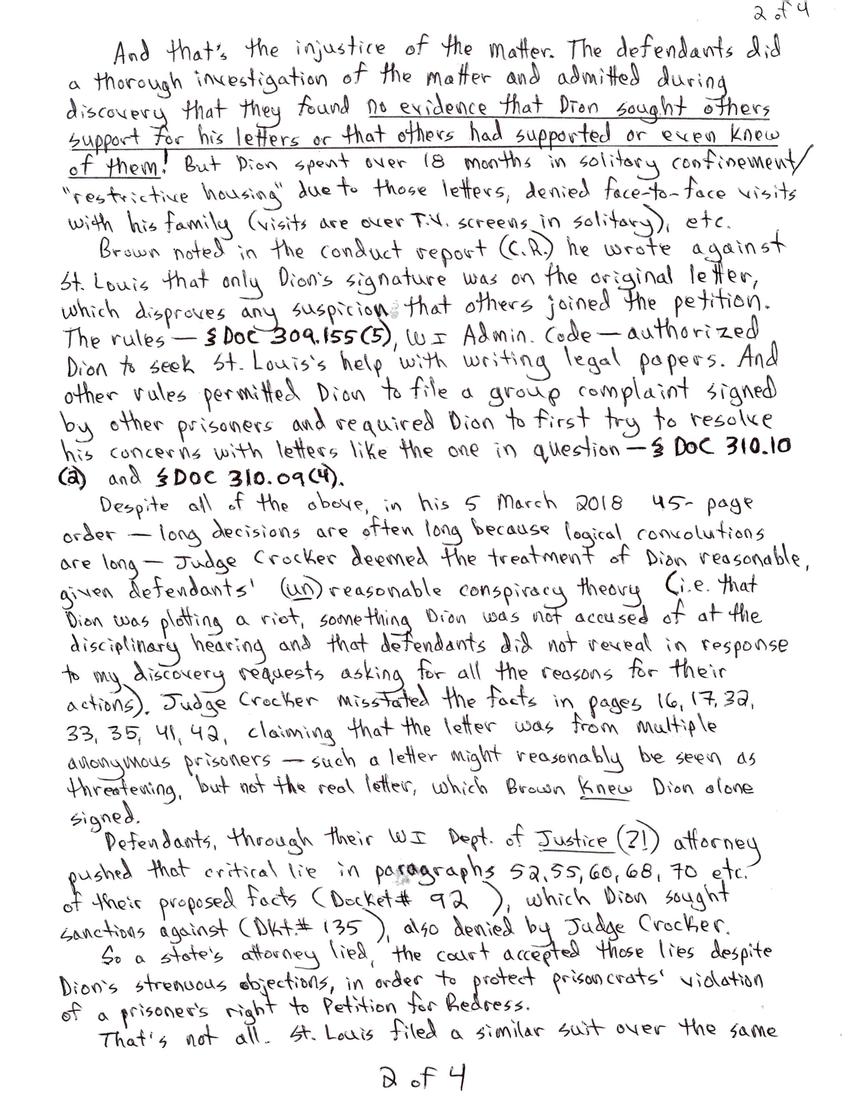 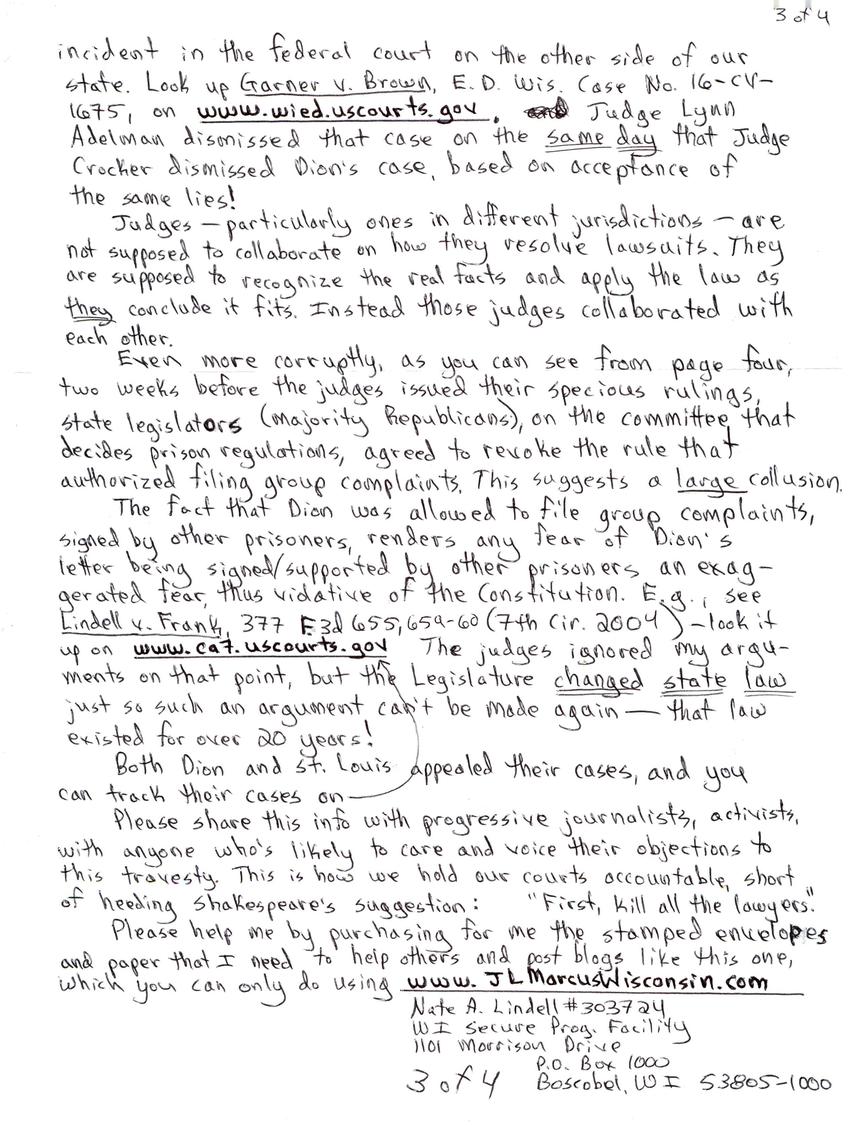 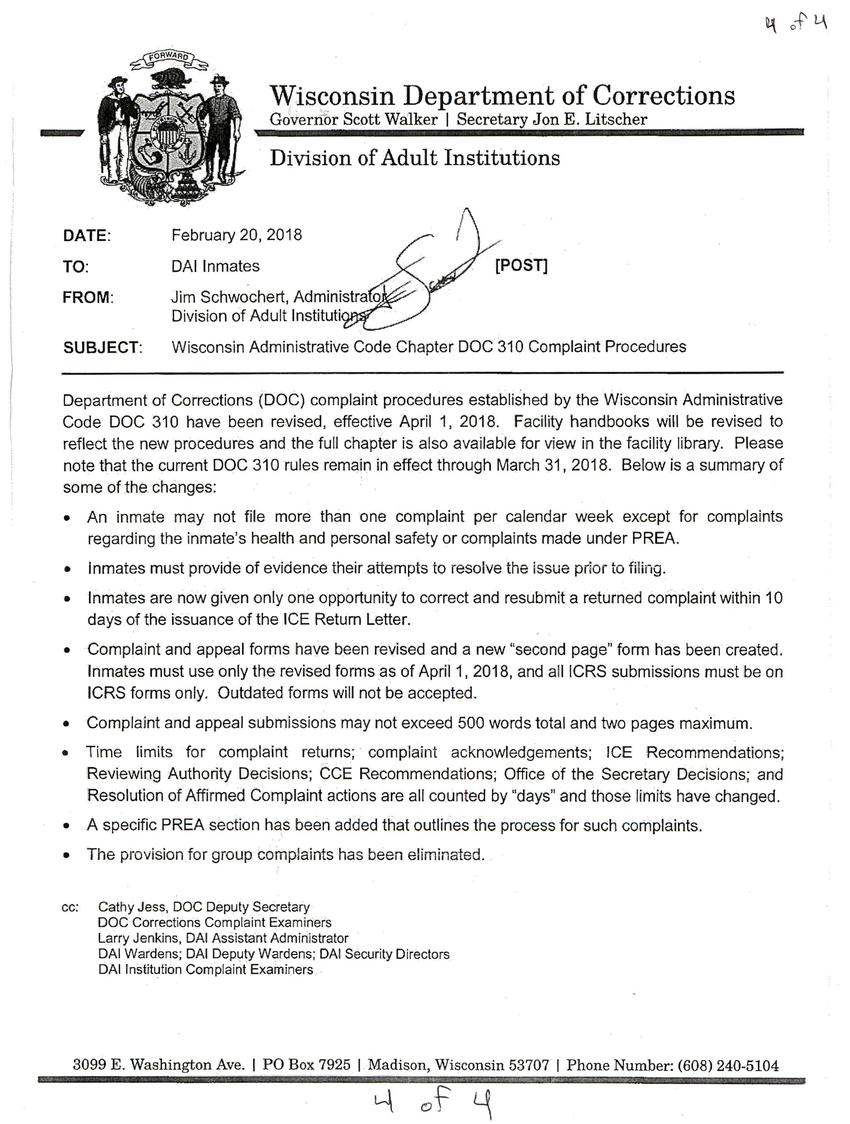 Many believe the myth that America's courts will protect important or even "minor" rights of prisoners, or will at least rely on truth and rationality to condone prisoncrats' "restrictions" of prisoners' rights, moreso the rights of non-incarcerated people. That belief, amongst others, leads most people to tolerate the status quo.

What happened in a case I litigated shows that myth for what it is: a myth, but a comforting one.

The case is Dion Matheus v. Lebbeus Brown, W.D. Wis. Case No. 16-CV-650-slc (accessible on www.wiwd.uscourts.cov). You can email the judge (Stephen Crocker) and ask him about his following devious actions.

Dion is a prisoner here at W.S.P.F. who wrote a letter seeking higher education and rehabilitative programs for all prisoners, and approval of a prisoners' committee to present concerns to the administration. Dion gave the letter to jailhouse lawyer Oscar Garner ("St. Louis") for editing and typing, so copies could be sent to W.S.P.F.'s admin. But before St. Louis cell was searched (because letters from St. Louis were found in the cell of a prisoner who'd been found in possession of Gangster Disciple G.D. lit.) and the letters were seized.

Although the letters were politely worded, they used phrases like "we propose" and "we ask", and sought changes "on behalf of all W.S.P.F. prisoners". Because of that and because Brown deemed Dion to be the leader of G.D. members in general population (GP). Brown gave no evidence to justify that belief, just his training. Brown charged Dion and St. Louis with creating a "group petition", a violation that required evidence that Dion either sought support for his letters or that others joined in support of it.

*All of these facts can be found in the 63 paged summary judgment brief that I wrote for Dion (docket #137 in the case's record).

And that's the injustice of the matter. The defendants did a thorough investigation of the matter and admitted during discovery that they found no evidence that Dion sought others' support for his letters or that others had supported or even knew of them! But Dion spent over 18 months of solitary confinement ("restrictive housing") due to these letters, denied face-to-face visits with his family (they're over TV screen in solitary), etc.

Brown noted in the conduct report (CR) that he wrote against St. Louis, that only Dion's signature was on the original letter, which disproves any suspicion that others joined the petition. The rules (Section DOC 309.155(5), WI Admin. Code) authorized Dion to seek St. Louis's help with writing legal papers. And other rules permitted Dion to file a group complaint signed by other prisoners and required Dion to first try to resolve his concerns with letters like the one in question (Section DOC 310.10(2) and Section DOC 310.09(4)).

Despite all of the above, in his March 5, 2018 order (long decisions are often long because logical convolutions are long), Judge Crocker deemed the treatment of Dion reasonable given defendants' (un)reasonable conspiracy theory (i.e. that Dion was plotting a riot, something Dion was not accused of at the disciplinary hearing and that defendants did not reveal in response to my discovery requests asking for all the reasons for their actions). Judge Crocker misstated the facts in pages 16, 17, 32, 33, 35, 41, 42, claiming that the letter was from multiple anonymous prisoners. Such a letter might reasonably be seen as threatening, but not the real letter which Brown knew Dion alone signed.

Defendants, through their WI Dept. of Justice (?!) attorney pushed that critical lie in paragraphs 52, 55, 60, 68, 70, etc. of their proposed facts (Docket #92), which Dion sought sanctions against (Docket #135), also denied by Judge Crocker. So a state attorney lied, the court accepted those lies (despite Dion's strenuous objections), in order to protect prisoncrats' violation of a prisoner's right to petition for redress.

That's not all. St. Louis filed a similar suit over the same incident in the federal court on the other side of our state. Look up Garner v. Brown, E.D. Wis. Case No. 16-CV-1675 on www.wied.uscourts.gov. Judge Lynn Adelman dismissed that case on the same day that Judge Crocker dismissed Dion's case based on the acceptance of the same lies!

Judges, particularly ones in different jurisdictions, are not supposed to collaborate on how they resolve lawsuits. They are supposed to recognize the real facts and apply the law as they conclude it fits. Instead, those judges collaborated with each other. Even more corruptly, as you can see from page four, two weeks before judges issued their specious rulings, state legislators (majority Republicans) on the committee that decides prison regulations, agreed to revoke the rule that authorized filing group complaints. This suggests a large collusion.

The fact that Dion was allowed to file group complaints, signed by other prisoners, renders any fear of Dion's letter being signed or supported by other prisoners an exaggerated fear, thus vidative of the Constitution (e.g., see Lindell v. Frank, 377 F.3d 655, 659-660, 7th Cir. 2007). Look it up on www.wied.uscourts.gov. The judges ignored my arguments on that point, but the legislature changed state law just so such an argument can't be made again. That law existed for over 20 years!

Both Dion and St. Louis appealed their cases, and you can track their cases on www.wied.uscourts.gov.

Please share this info with progressive journalists, activists, with anyone who's likely to care and voice their objections to this travesty. This is how we hold our courts accountable, short of heeding Shakespeare's suggestion: "First, kill all the lawyers."

Please help me by purchasing for me the stamped envelopes with paper that I need to help others and post blog posts like this one. You can only do this by using www.jlmarcuswisconsin.com.

Department of Corrections (DOC) complaint procedures established by the Wisconsin Administrative Code DOC 310 has been revised, effective April 1, 2018. Facility handbooks will be revised to reflect the new procedures and the full chapter is also available for view in the facility library. Please note that the current DOC 310 rules remain in effect through March 31, 2018. Below is a summary of some of the changes:

*An inmate may not file more than one complaint per calendar week except for complaints regarding the inmate's health and personal safety or complaints made under PREA.
*Inmates must provide of evidence their attempts to resolve the issue prior to filing.
*Inmates are now given only one opportunity to correct and resubmit a returned complaint within 10 days of the issuance of the ICE Return Letter.
*Complaint and appeal forms have been revised and a new "second page" form has been created. Inmates must use only the revised forms as of April 1, 2018, and all ICRS submissions must be on ICRS forms only. Outdated forms will not be accepted.
*Complaint and appeal submissions may not exceed 500 words total and two pages minimum.
*Time limits for complaint returns; complaint acknowledgements; ICE Recommendations; Reviewing Authority Decisions; CCE Recommendations; Office of the Secretary Decisions; and Resolution of Affirmed Complaint actions are all counted by "days" and those limits have changed.
*A specific PREA section has been added that outlines the process for such complaints.
*The provision for group complaints has been eliminated.