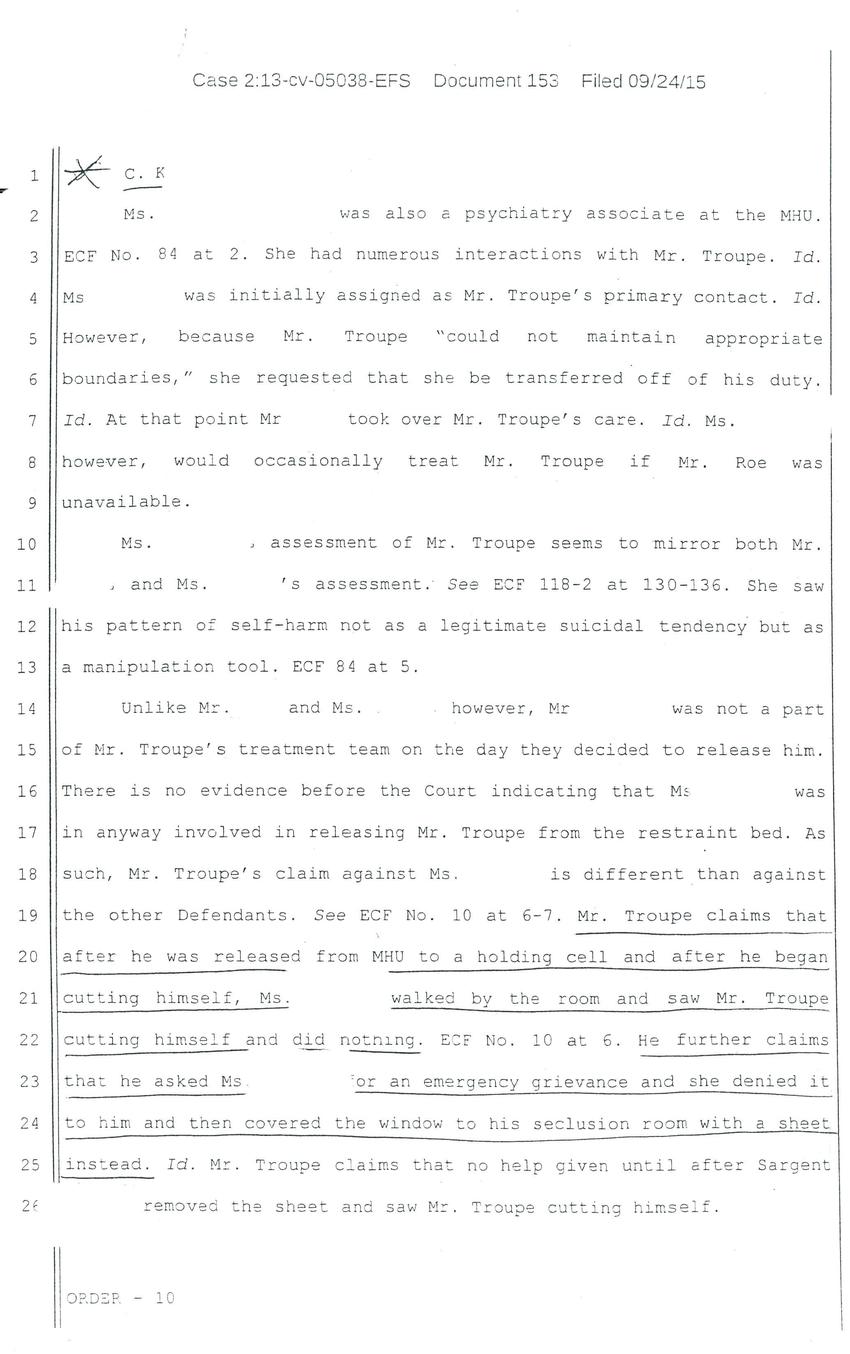 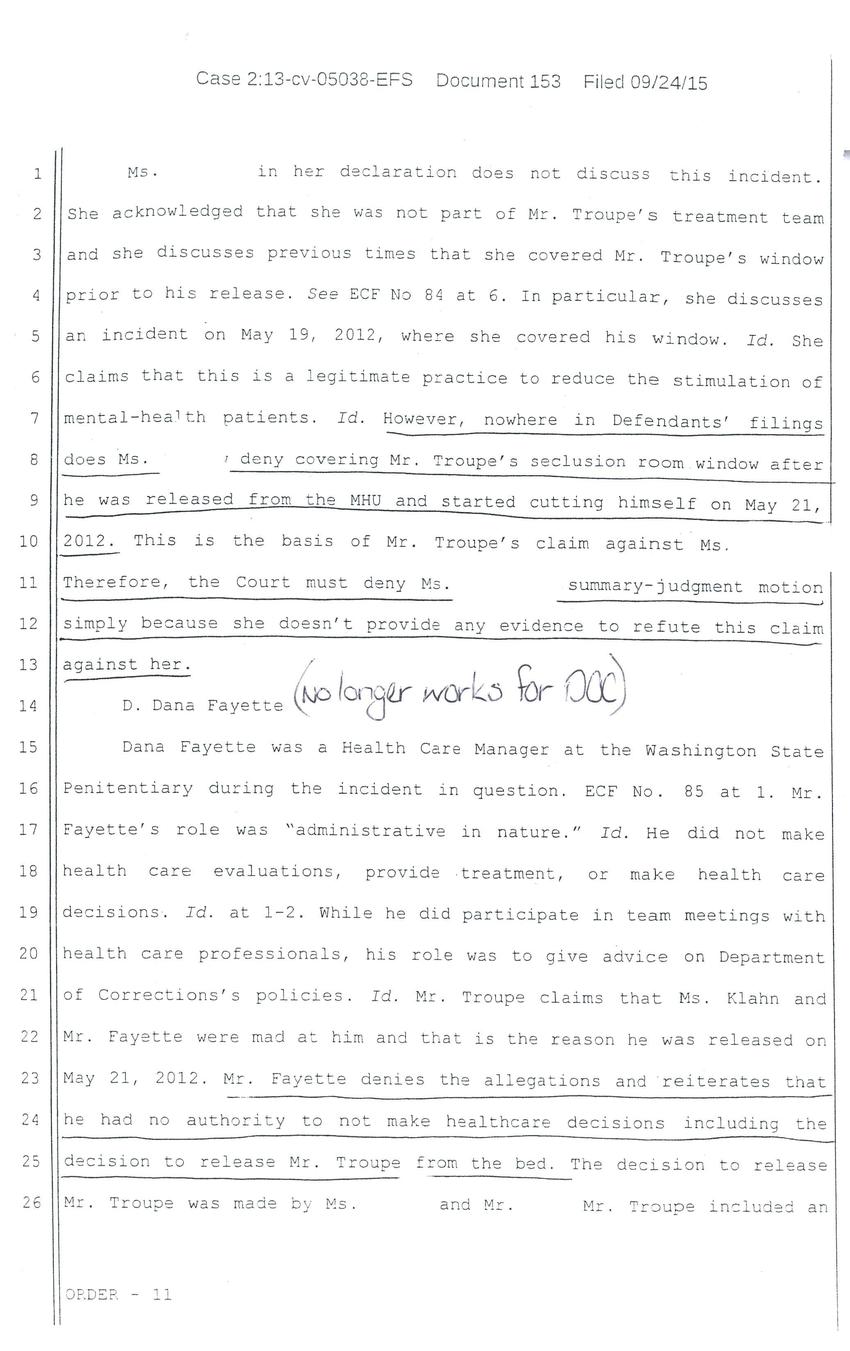 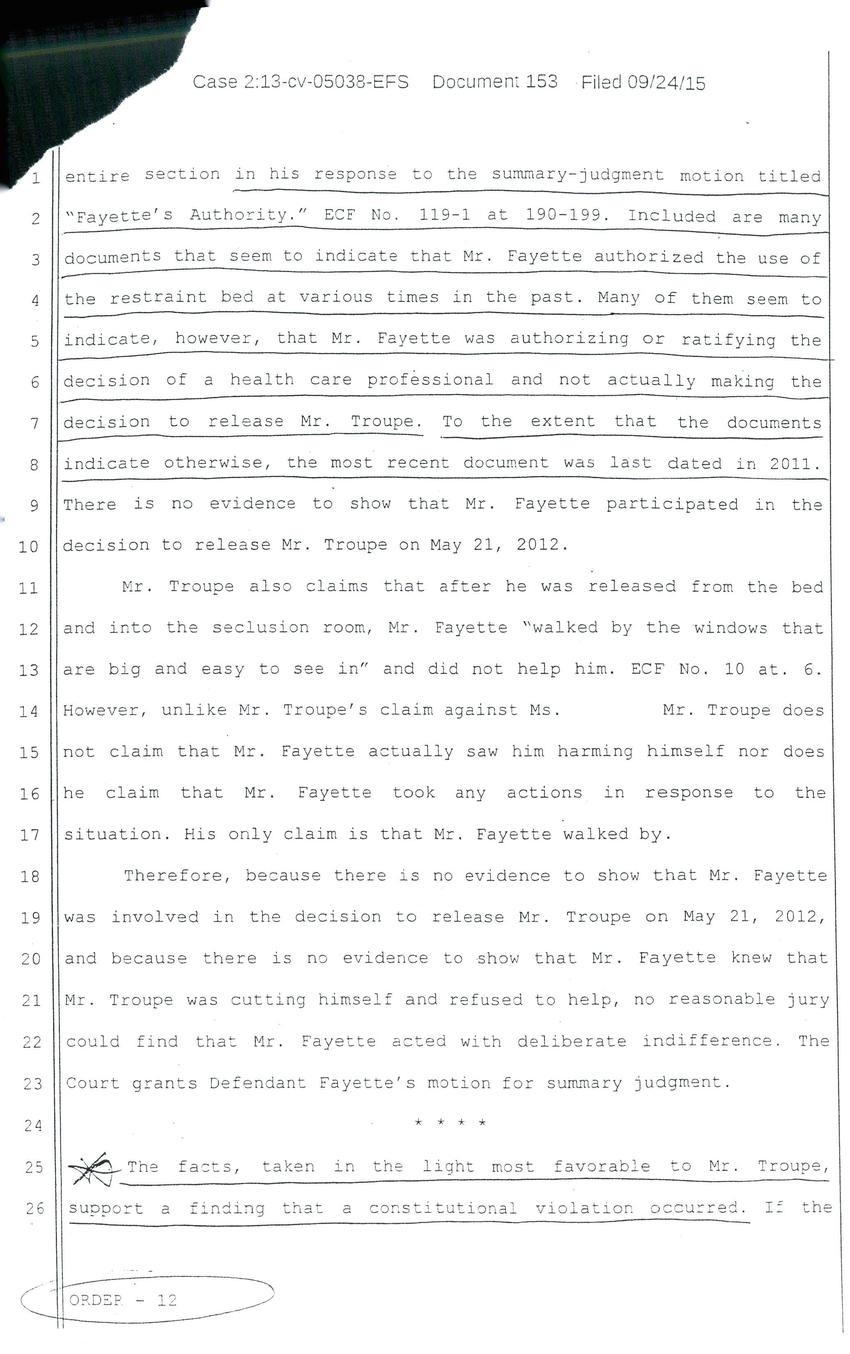 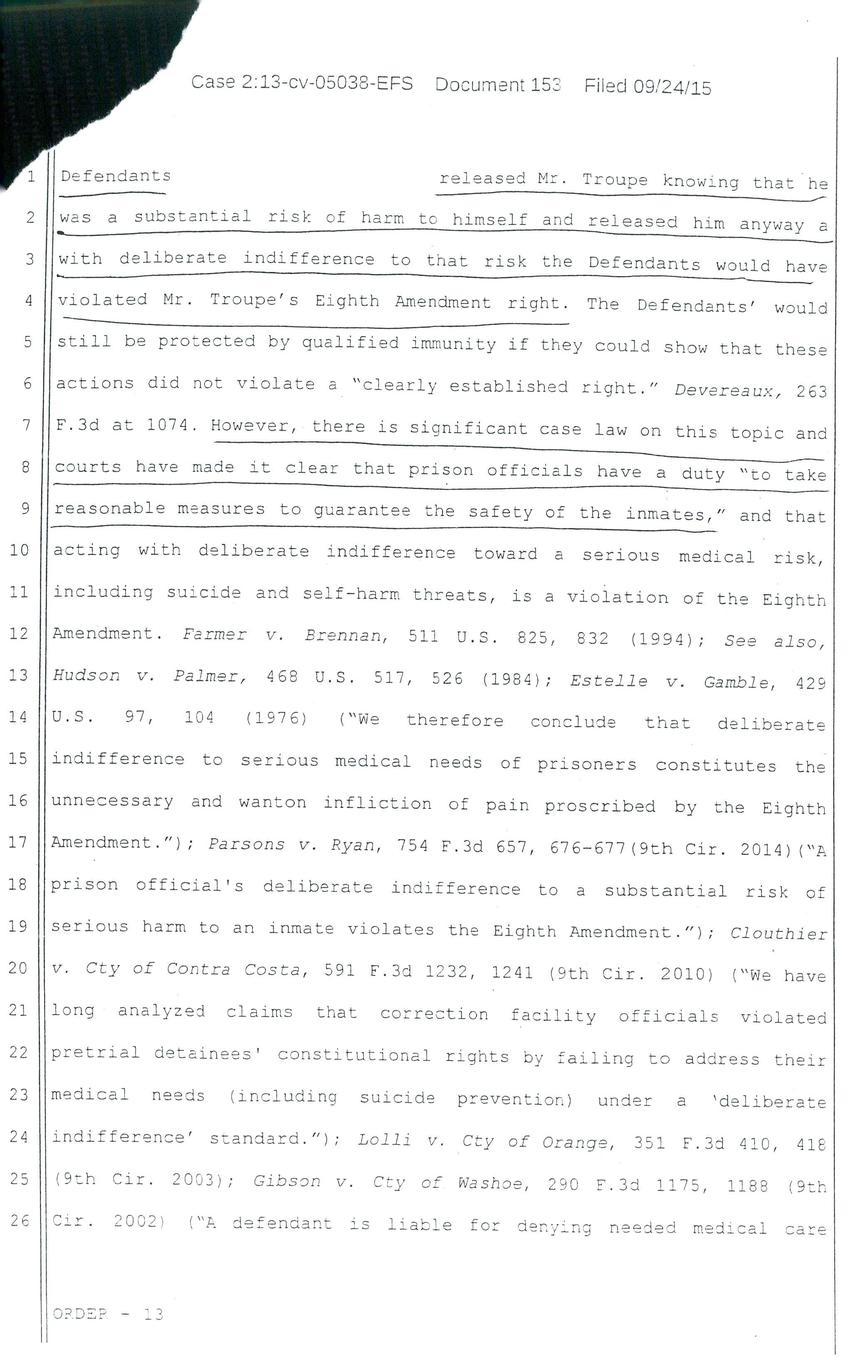 C.K
Ms. was also a psychiatry associate at the MHU.
ECF No. 84 at 2. She had numerous interactions with Mr. Troupe. Id.
Ms was initially assigned as Mr. Troupe's primary contact. Id.
However, because Mr. Troupe "could not maintain appropriate appropriate
boundaries," she requested that she be transferred off of his duty.
Id. At that point Mr took over Mr. Troupe's care. Id. Ms.
however, would occasionally treat Mr. Troup if Mr. Roe was
unavailable.
Ms. assessment of Mr. Troupe seems to mirror both Mr.
and Ms. 's assessment. See ECF 118-2 at 130-136. She saw
his pattern of self-harm not as a legitimate suicidal tendency but as
a manipulative tool. ECF 84 at 5.
Unlike Mr. and Ms. however, Mr was not a part
of Mr. Troupe's treatment team on the day they decided to release him.
There is no evidence before the Court indicating that Ms was
in anyway involved in releasing Mr. Troupe from the restraint bed. As
such, Mr. Troupe's claim against Ms. is different than against
the other Defendants. See ECF No. 10 at 6-7. Mr. Troupe claims that
after he was released from MHU to a holding cell and after he began
cutting himself, Ms. walked by the room and saw Mr. Troupe
cutting himself and did nothing. ECF No. 10 at 6. He further claims
that he asked Ms for an emergency grievance and she denied it
to him and then covered the window to his seclusion room with a sheet
instead. Id. Mr. Troupe claims that no help given until after Sargent
removed the sheet and saw Mr. Troupe cutting himself.

Ms. in her declaration does not discuss this incident.
She acknowledged that she was not part of Mr. Troupe's treatment team
and she discusses previous times that she covered Mr. Troupe's window
prior to his release. See ECF No 84 at 6. In particular, she discusses
an incident on May 19, 2012, where she covered his window. Id. She
claims that this is a legitimate practice to reduce the stimulation of
mental-health patients. Id. However, nowhere in Defendants' filings
does Ms. deny covering Mr. Troupe's seclusion room window after
he was released from the MHU and started cutting himself on May 21,
2012. This is the basis of Mr. Troupe's claim against Ms.
Therefore, the Court must deny Ms. summary-judgement motion
simply because she doesn't provide any evidence to refute this claim
against her.
D. Dana Fayette (No longer works for DOC)
Dana Fayette was a Health Care Manager at the Washington State
Penitentiary during the incident in question. ECF No. 85 at 1. Mr.
Fayette's role was "administrative in nature." Id. He did not make
health care evaluations, provide treatment, or make health care
decisions. Id. at 1-2. While he did participate in team meetings with
health care professionals, his role was to give advice on Department
of Corrections's policies. Id. Mr. Troupe claims that Ms. Klahn and
Mr. Fayette were mad at him and that is the reason he was released on
May 21, 2012. Mr. Fayette denies the allegations and reiterated that
he had no authority to not make healthcare decisions including the
decision to release Mr. Troupe from the bed. The decision to release
Mr. Troupe was made by Ms. and Mr. Mr. Troupe included an
entire section in his response to the summary-judgment motion titled
"Fayette's Authority." ECF No. 119-1 at 190-199. Included are many
documents that seem to indicate that Mr. Fayette authorized the use of
the restraint bed at various times in the past. Many of them see to
indicate, however, that Mr. Fayette was authorizing or ratifying the
decision of a health care professional and not actually making the
decision to release Mr. Troupe. To the extent that the documents
indicate otherwise, the most recent document was last dated in 2011.
There is no evidence to show that Mr. Fayette participated in the
decision to release Mr. Troupe on May 21, 2012.
Mr. Troupe also claims that after he was released from the bed
and into the seclusion room, Mr. Fayette "walked by the windows that
are big and easy to see in" and did not help him. ECF No. 10 at. 6.
However, unlike Mr. Troupe's claim against Ms. Mr. Troupe does
not claim that Mr. Fayette actually saw him harming himself nor does
he claim that Mr. Fayette took any actions in response to the
situation. His only claim is that Mr. Fayette walked by.
Therefore, because there is no evidence to show that Mr. Fayette
was involved in the decision to release Mr. Troupe on May 21, 2012,
and because there is no evidence to show that Mr. Fayette knew that
Mr. Troupe was cutting himself and refused to help, no reasonable jury
could find that Mr. Fayette acted with deliberate indifference. The
Court grants Defendant Fayette's motion for summary judgment.
****
The facts, taken in the light most favourable to Mr. Troupe,
support a finding that constitutional violation occurred. If the
Defendants released Mr. Troupe knowing that he
was a substantial risk of harm to himself and released him anyway a
with deliberate indifference to that risk the Defendants would have
violated Mr. Troupe's Eighth Amendment right. The Defendants' would
still be protected by qualified immunity if they could show that these
actions did not violate a "clearly established right." Deveraux, 263
F.3d at 1074. However, there is significant case law on this topic and
courts have made it clear that prison officials have a duty "to take
reasonable measures to guarantee the safety of the inmates," and that
acting with deliberate indifference toward a serious medical risk,
including suicide and self-harm threats, is a violation of the Eighth
Amendment. Farmer v. Brenna, 511 U.S. 825, 832 (1994); See also,
Hudson v. Palmer, 468 U.S. 517, 526 (1984); Estelle v. Gamble, 429
U.S. 97, 104 (1976) ("We therefore conclude that deliberate
indifference to serious medical needs of prisoners constitutes the
unnecessary and wanton infliction of pain prescribed by the Eighth
Amendment."); Parsons v. Ryan, 754 F.3d 657, 676-677 (9th Cir. 2014) ("A
prison official's deliberate indifference to a substantial risk of
serious harm to an inmate violates the Eighth Amendment."); Clouthier
v. Cty of Contra Costa, 591 F.3d 1232, 1241 (9th Cir. 2010) ("We have
long analysed claims that correction facility officials violated
pretrial detainees' constitutional rights by failing to address their
medical needs (including suicide prevention) under a 'deliberate
indifference' standard."); Lolli v. Cty of Orange, 351 F.3d 410, 418
(9th Cir. 2003); Gibson v. Cty of Washoe, 290 F.3d 1175, 1188 (9th
Cir. 2002) ("A defendant is liable for denying needed medical care