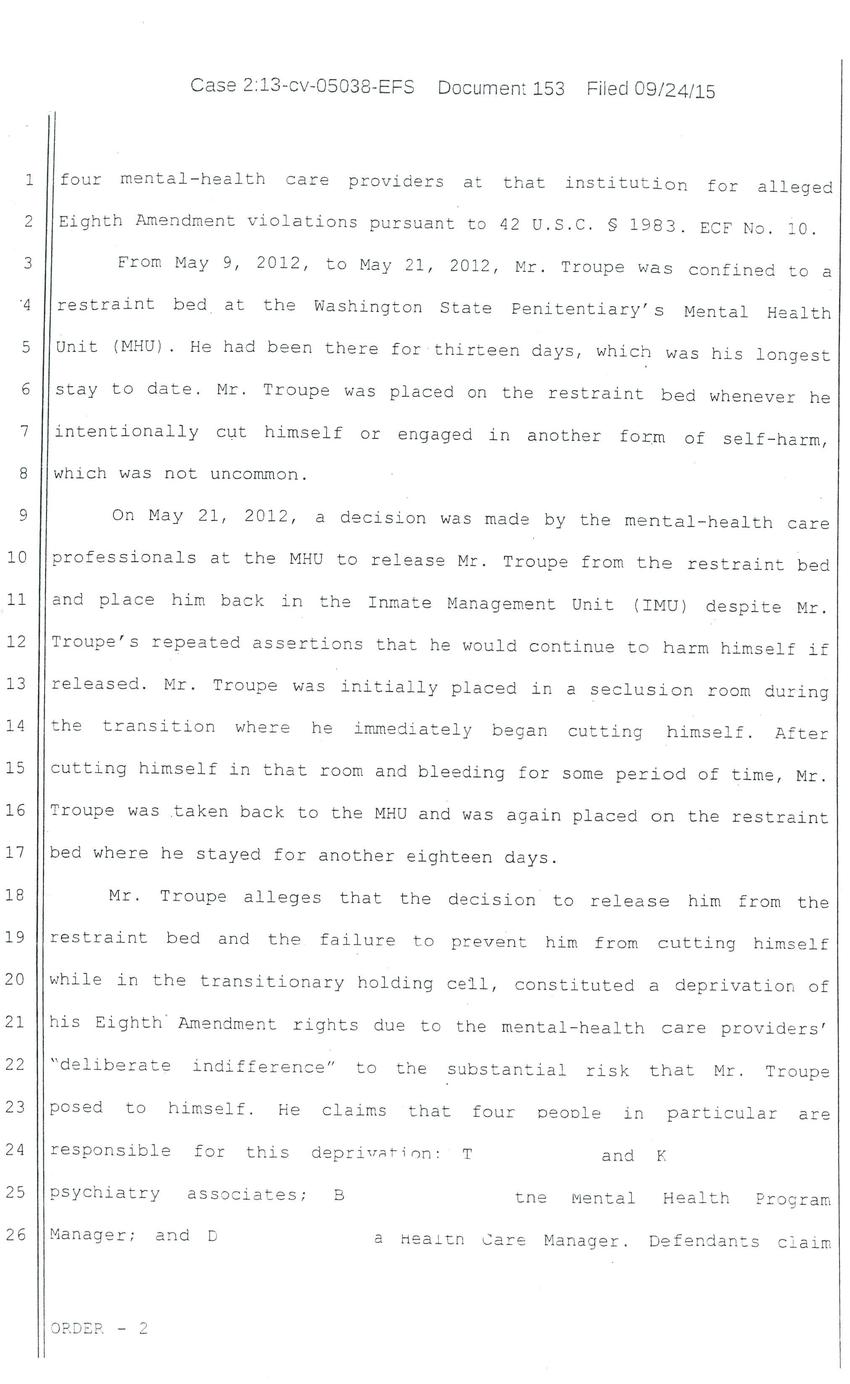 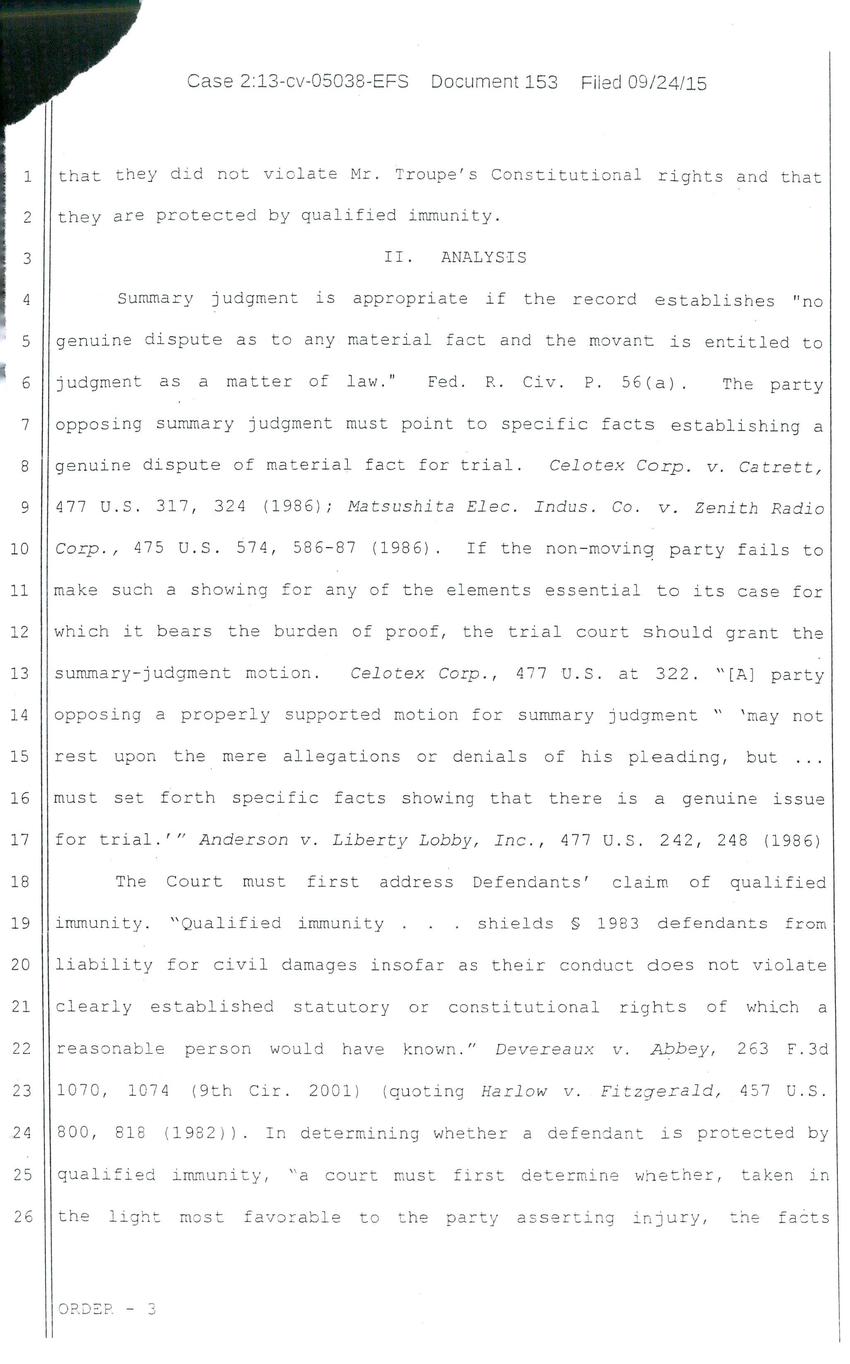 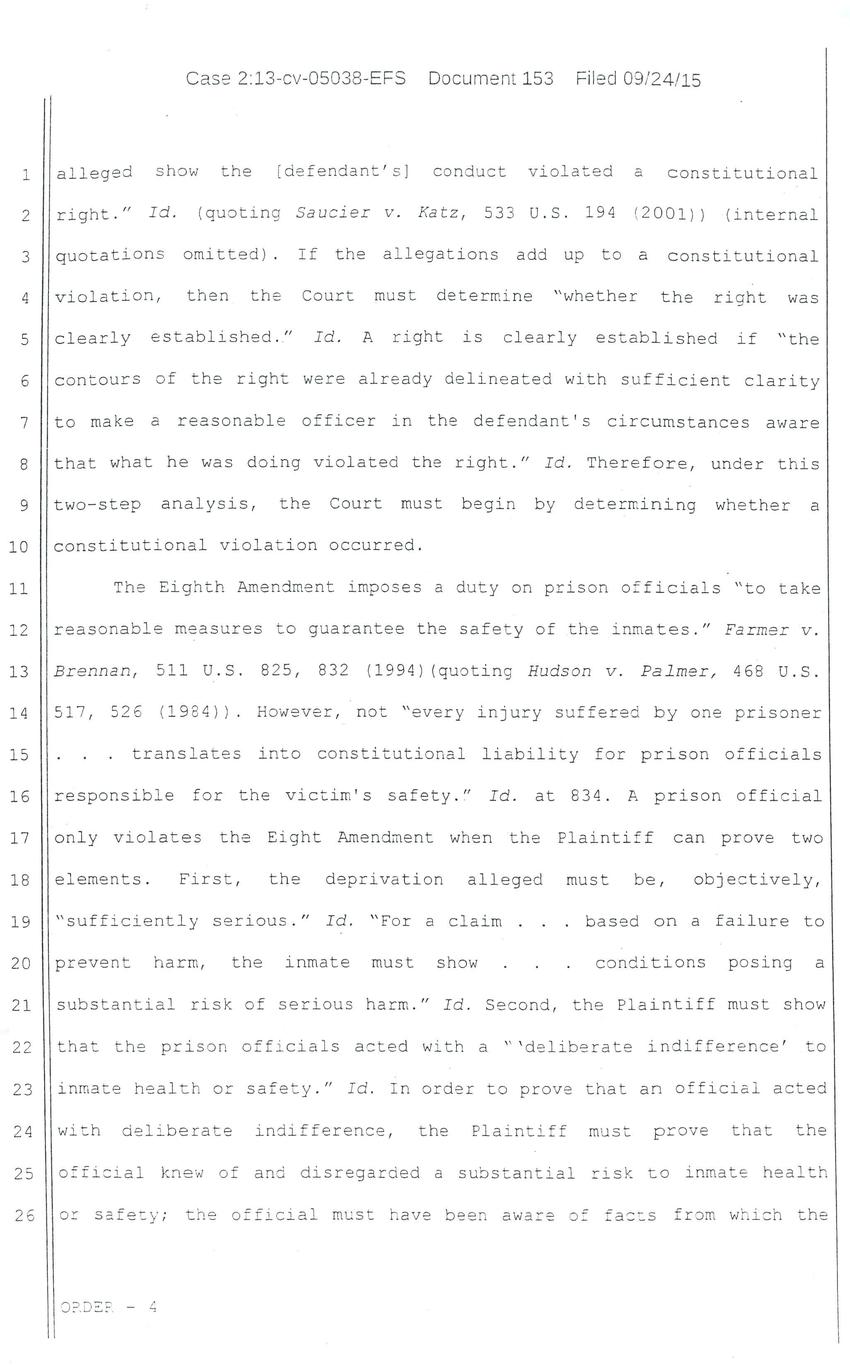 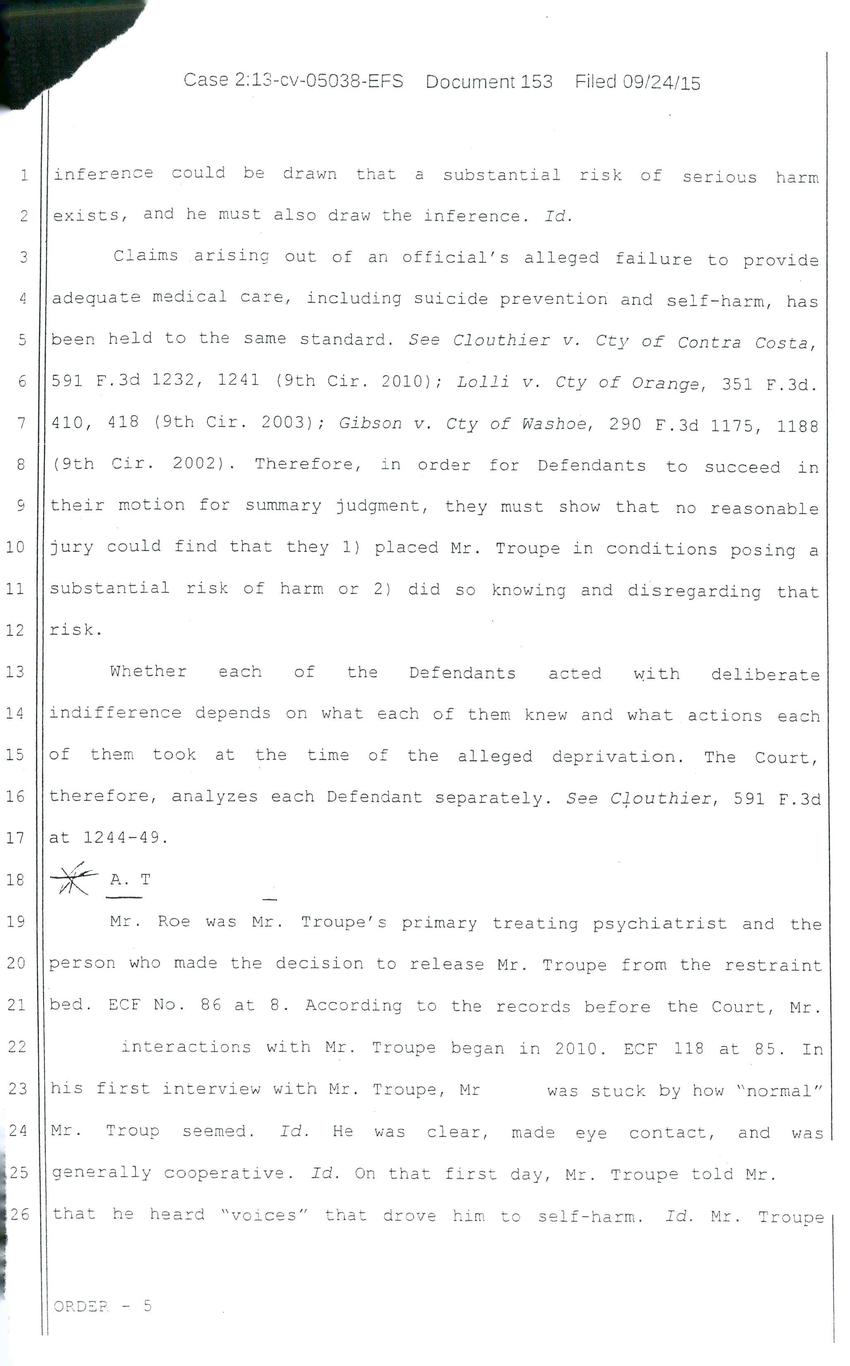 Case 2:13-cv-05038-EFS Document 153 Filed 09/24/15
four mental-health care providers at that institution for alleged Eighth Amendment violations pursuant to 42 U.S.C. 1983. EFC No. 10. From May 9, 2012, to May 21, 2012, Mr. Troupe was confined to a restraint bed at the Washington State Penitentiary's Mental Health Unit (MHU). He had been there for thirteen days, which was his longest stay to date. Mr. Troupe was placed on the restraint bed whenever he intentionally cut himself or engaged in another form of self-harm, which was not uncommon.
On May 21, 2012, a decision was made by the mental-health professionals at the MHU to release Mr. Troupe from the restraint bed and place him back in the Inmate Management Unit (IMU) despite Mr. Troupe's repeated assertions that he would continue to harm himself if released. Mr. Troupe was initially placed in a seclusion room during the transition where he immediately began cutting himself. After cutting himself in that room and bleeding for some period of time, Mr. Troupe was taken back to the MHU and again placed on the restraint bed where he stayed for another eighteen days.
Mr. Troupe alleges that the decision to release him from the restraint bed and the failure to prevent him from cutting himself while in the transitionary holding cell, constituted a deprivation of his Eighth Amendment rights due to the mental-health care providers' "deliberate interference" to the substantial risk that Mr. Troupe posed to himself. He claims that four people in particular are responsible for this deprivation; T and K psychiatry associates; B the Mental Health Program Manager; and D a Health Care Manager. Defendants claim that they did not violate Mr. Troupe's Constitutional rights and that they are protected by qualified immunity.
II. ANALYSIS
Summary judgement is appropriate if the record establishes "no genuine dispute as to any material fact and the movant is entitled judgement as a matter of law." Fed. R. Civ. P. 56(a). The party opposing summary judgment must point to specific facts establishing a genuine dispute of material fact for trial. Celotex Corp. v. Catrett, 477 U.S. 317, 324 (1986); Matsushita Elec. Indus. Co. V. Zenith Radio Corp., 475 U.S. 574, 586-87 (1986). If the non-moving party fails to make such a showing for any of the elements essential to its case for which it bears the burden of proof, the trial court should grant the summary-judgement motion. Celotex Corp., 477 U.S. at 322. "[A] party opposing a properly supported motion for summary judgment" 'may not rest upon the mere allegations or denials of his pleading, but...must set forth specific facts showing that there is a genuine issue for trial.'" Anderson V. Liberty Lobby, Inc., 477 U.S. 242, 248 (1986)
The court must first address Defendants' claim of qualified immunity. "Qualified immunity...shields 1983 defendants from the liability for civil damages insofar as their conduct does not violate clearly established statutory or constitutional rights of which a reasonable person would have known." Devereaux v. Fitzgerald, 457 U.S. 800, 818 (1982)). In determining whether a defendant is protected by qualified immunity, "a court must first determine whether, taken in the light most favorable to the party asserting injury, the facts alleged show the {defendant's} conduct violated a constitutional right." Id. (quoting Saucier v. Katz, 533 U.S. 194 (2011)) (internal quotations omitted). If the allegations add up to a constitutional violation, then the Court must determine "whether the right was clearly established." Id. A right is clearly established if "the contours of the right were already delineated with sufficient clarity to make a reasonable officer in the defendant's circumstances aware that what he as doing violated the right." Id. Therefore, under this two-step analysis, the Court must begin by determining whether a constitutional violation occurred.
The Eighth Amendment imposes a duty on prison officials "to take reasonable measures to guarantee the safety of the inmates." Farmer v. Brennan,511 U.S. 825, 832 (1994) (quoting Hudson v. Palmer, 468 U.S. 517, 526 (1984)). However, not "every injury suffered by one prisoner...translates into constitutional liability for prison officials responsible for the victim's safety." Id. at 834. A prison official only violates the Eight Amendment when the Plaintiff can prove two elements. First, the deprivation alleged must be, objectively, "sufficiently serious." Id. "for a claim...based on a failure to prevent harm, the inmate must show...conditions posing a substantial risk of serious harm." Id. Second, the Plaintiff must show that the prison officials acted with "deliberate indifference' to inmate health or safety." Id. In order to prove that an official acted with deliberate indifference, the Plaintiff must prove that the official knew of and disregarded a substantial risk to inmate health or safety; the official must have been aware of facts from which the inference could be drawn that a substantial risk of serious harm exists, and he must also draw the inference. Id.
Claims arising out of an official's alleged failure to provide adequate medical care, including suicide prevention and self-harm, has been held to the same standard. See Clouthier v. Cty of Contra Costa, 591 F.3d 1232, 1241 (9th Cir. 2010); Lolli v. Cty of Orange, 351 F.3d. 410, 418 (9th Cir. 2003); Gibson v. Cty of Washoe, 290 F.3d 1175, 1188 (9th Cir. 2002). Therefore, in order for Defendants to succeed in their motion for summary judgment, they must show that no reasonable jury could find that they 1) placed Mr. Troupe in conditions posing a substantial risk of harm or 2) did so knowing and disregarding that risk.
Whether each of the Defendants acted with deliberate indifference depends on what each of them knew and what actions each of them took at the time of the alleged deprivation. The Court, therefore, analyzes each Defendant separately. See Clouthier, 591 F.3d at 1244-49.
*A.T.
Mr. Roe was Mr. Troupe's primary treating psychiatrist and the person who made the decision to release Mr. Troupe from the restraint bed. EFC No. 86 at 8. According to the records before the Court, Mr. interactions with Mr. Troupe began in 2010. EFC 118 at 85. In his first interview with Mr. Troupe, Mr. was struck by how "normal" Mr. Troupe seemed. Id. He was clear, made eye contact, and was generally cooperative. Id. On that first day, Mr. Troupe told Mr. that he heard "voices" that drove him to self-harm. Id. Mr. Troupe