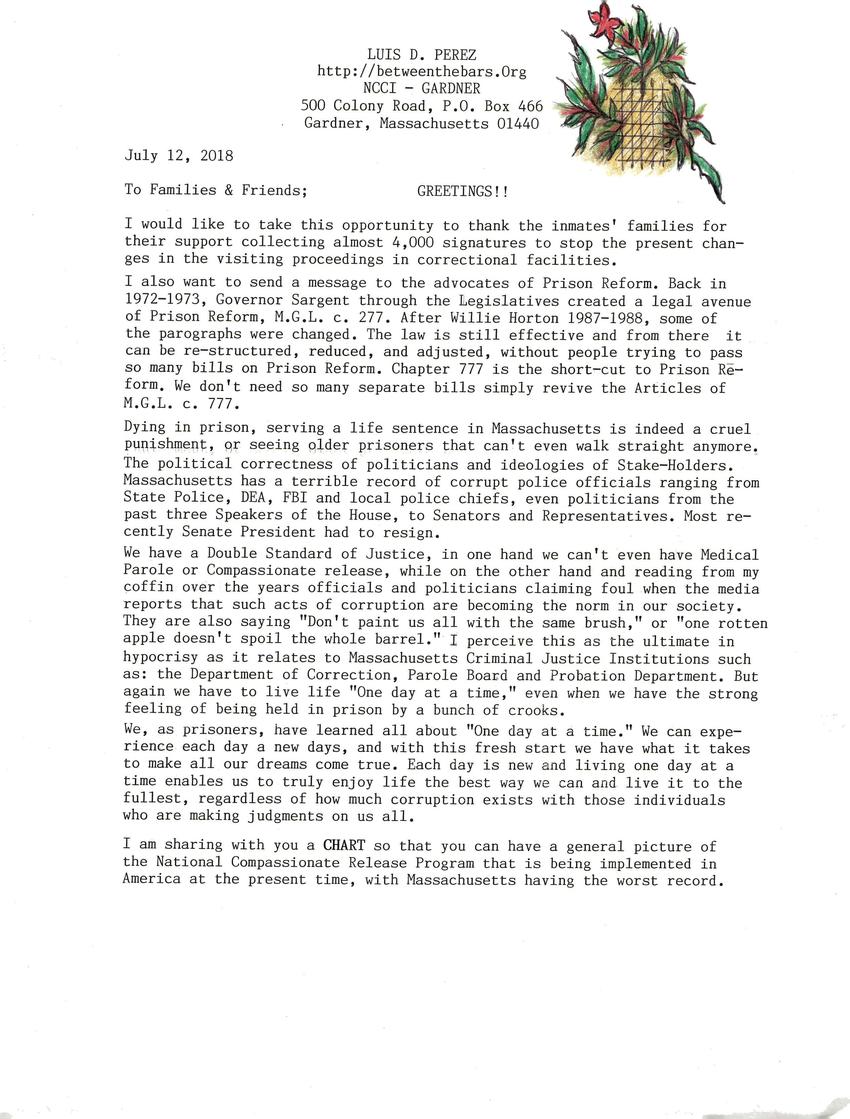 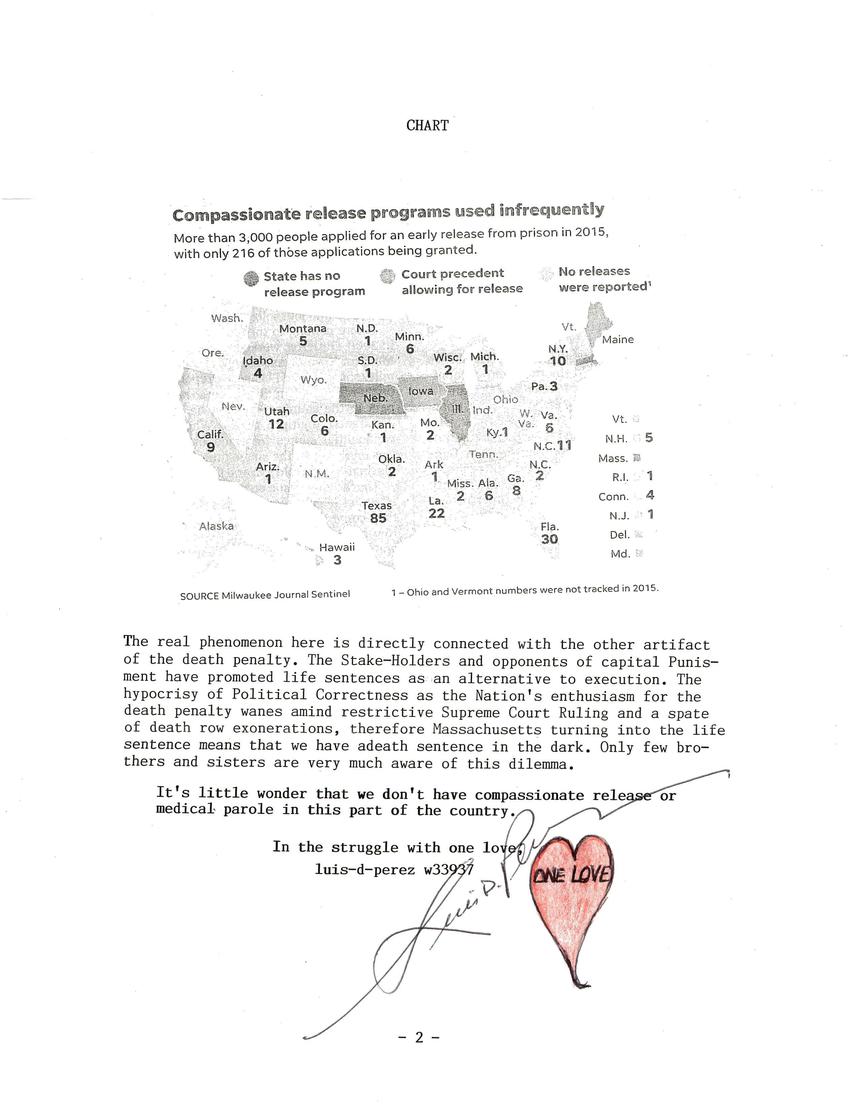 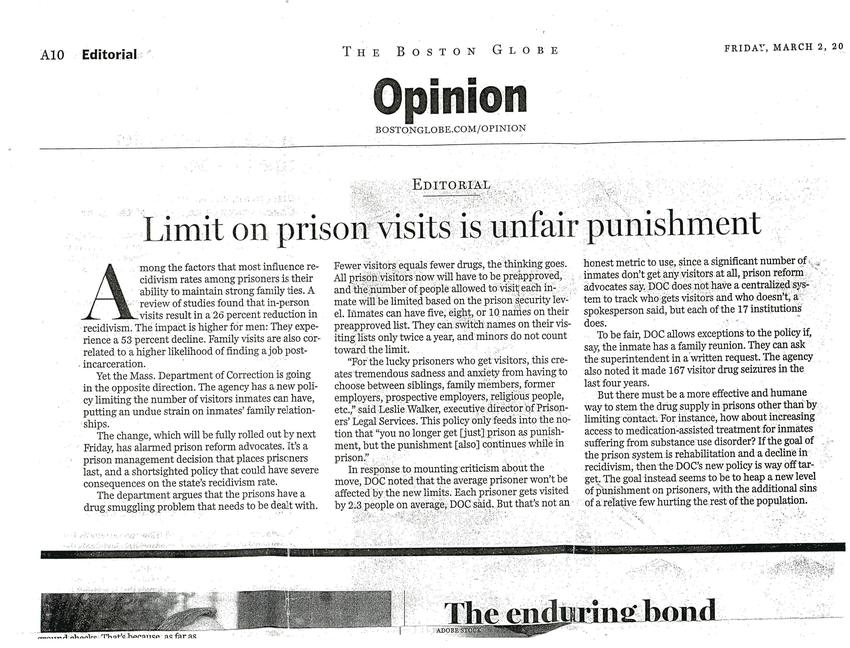 I would like to take this opportunity to thank the inmates' families for their support collecting almost 4,000 signatures to stop the present changes in the visiting proceedings in correctional facilities.

I also want to send a message to the advocates of Prison Reform. Back in 1972-1973, Governor Sargent through the Legislatives created a legal avenue of Prison Reform, M.G.L. c. 277. After Willie Horton 1987-1988, some of the paragraphs were changed. The law is still effective and from there it can be re-structured, reduced, and adjusted, without people trying to pass so many bills on Prison Reform. Chapter 777 is the short-cut to Prison Reform. We don't need so many separate bills simply revive the Articles of M.G.L. c. 777.

Dying in prison, serving a life sentence in Massachusetts is indeed a cruel punishment, or seeing older prisoners that can't even walk straight anymore. The political correctness of politicians and ideologies of Stake-Holders. Massachusetts has a terrible record of corrupt police officials ranging from State Police, DEA, FBI and local police chiefs, even politicians from the past three Speakers of the House, to Senators and Representatives. Most recently Senate President had to resign.

We have a Double Standard of Justice, in one hand we can't even have Medical Parole or Compassionate release, while on the other hand and reading from my coffin over the years officials and politicians claiming foul when the media reports that such acts of corruption are becoming the norm in our society. They are also saying "Don't paint us all with the same brush," or "one rotten apple doesn't spoil the whole barrel." I perceive this as the ultimate in hypocrisy as it relates to Massachusetts Criminal Justice Institutions such as: the Department of Correction, Parole Board and Probation Department. But again we have to live life "One day at a time," even when we have the strong feeling of being held in prison by a bunch of crooks.

We, as prisoners, have learned all about "One day at a time." We can experience each day a new days, and with this fresh start we have what it takes to make all our dreams come true. Each day is new and living one day at a time enables us to truly enjoy life the best way we can and live it to the fullest, regardless of how much corruption exists with those individuals who are making judgements on us all.

I am sharing with you a CHART so that you can have a general picture of the National Compassionate Release Program that is being implemented in America at the present time, with Massachusetts having the worst record.

More than 3,000 people applied for an early release from prison in 2015, with only 216 of those applications being granted.

The real phenomenon here is directly connected with the other artefact of the death penalty. The Stake-Holders and opponents of capital Punishment have promoted life sentences as an alternative to execution. The hypocrisy of Political Correctness as the Nation's enthusiasm for the death penalty wanes amid restrictive Supreme Court Ruling and a spate of death row exonerations, therefore Massachusetts turning into the life sentence means that we have a death sentence in the dark. Only few brothers and sisters are very much aware of this dilemma.

It's little wonder that we don't have compassionate release or medical parole in this part of the country.

In the struggle with one love,

Among the factors that most influence recidivism rates among prisoners is their ability to maintain strong family ties. A review of studies found that in-person visits result in a 26 percent reduction in recidivism. The impact is higher for men: They experience a 53 percent decline. Family visits are also correlated to a higher likelihood of finding a job post-incarceration.
Yet the Mass. Department of Correction is going in the opposite direction. The agency has a new policy limiting the number of visitors inmates can have, putting an undue strain on inmates' family relationships.
The change, which will be fully rolled out by next Friday, has alarmed prison reform advocates. It's a prison management decision that places prisoners last, and a shortsighted policy that could have severe consequences on the state's recidivism rate.
The department argues that the prisons have a drug smuggling problem that needs to be dealt with.
Fewer visitors equals fewer drugs, the thinking goes. All prison visitors now will have to be preapproved, and the number of people allowed to visit each inmate will be limited based on the prison security level. Inmates can have five, eight, or 10 names on their preapproved list. They can switch names on their visiting lists only twice a year, and minors do not county toward the limit.
"For the lucky prisoners who get visitors, this creates tremendous sadness and anxiety from having to choose between siblings, family members, former employers, prospective employers, religious people, etc.," said Leslie Walker, executive director of Prisoners' Legal Services. This policy only feeds into the notion that "you no longer get [just] prison as punishment, but the punishment [also] continues while in prison."
In response to mounting criticism about the move, DOC noted that the average prisoner won't be affected by the new limits. Each prisoner gets visited by 2.3 people on average, DOC said. But that's not an honest metric to use, since a significant number of inmates don't get any visitors at all, prison reform advocates say. DOC does not have a centralized system to track who gets visitors and who doesn't, a spokesperson said, but each of the 17 institutions does.
To be fair, DOC allows exceptions to the policy if, say, the inmate has a family reunion. They can ask the superintendent in a written request. The agency also noted it made 167 visitor drug seizures in the last four years.
But there must be a more effective and humane way to stem the drug supply in prisons other than by limiting contact. For instance, how about increasing access to medication-assisted treatment for inmates suffering from substance use disorder? If the goal of the prison system is rehabilitation and a decline in recidivism, then the DOC's new policy is way off target. The goal instead seems to be to heap a new level of punishment on prisoners, with the additional sins of a relative few hurting the rest of the population.