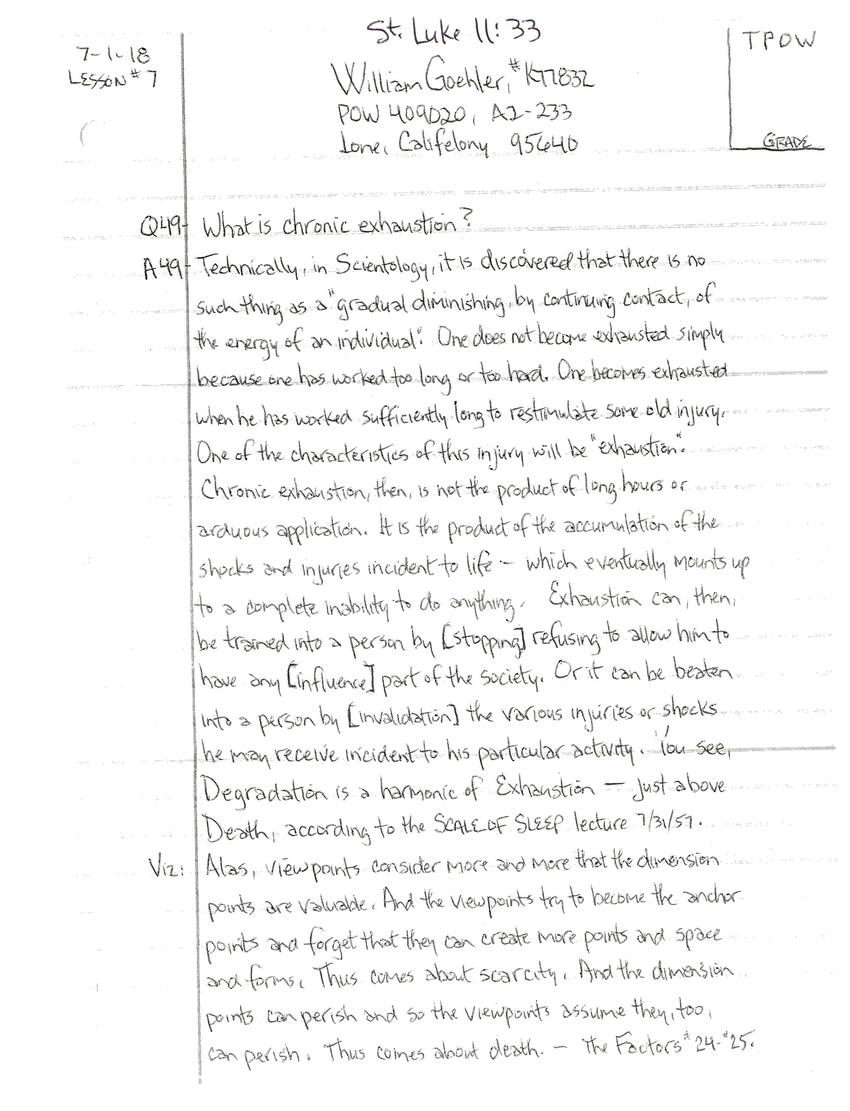 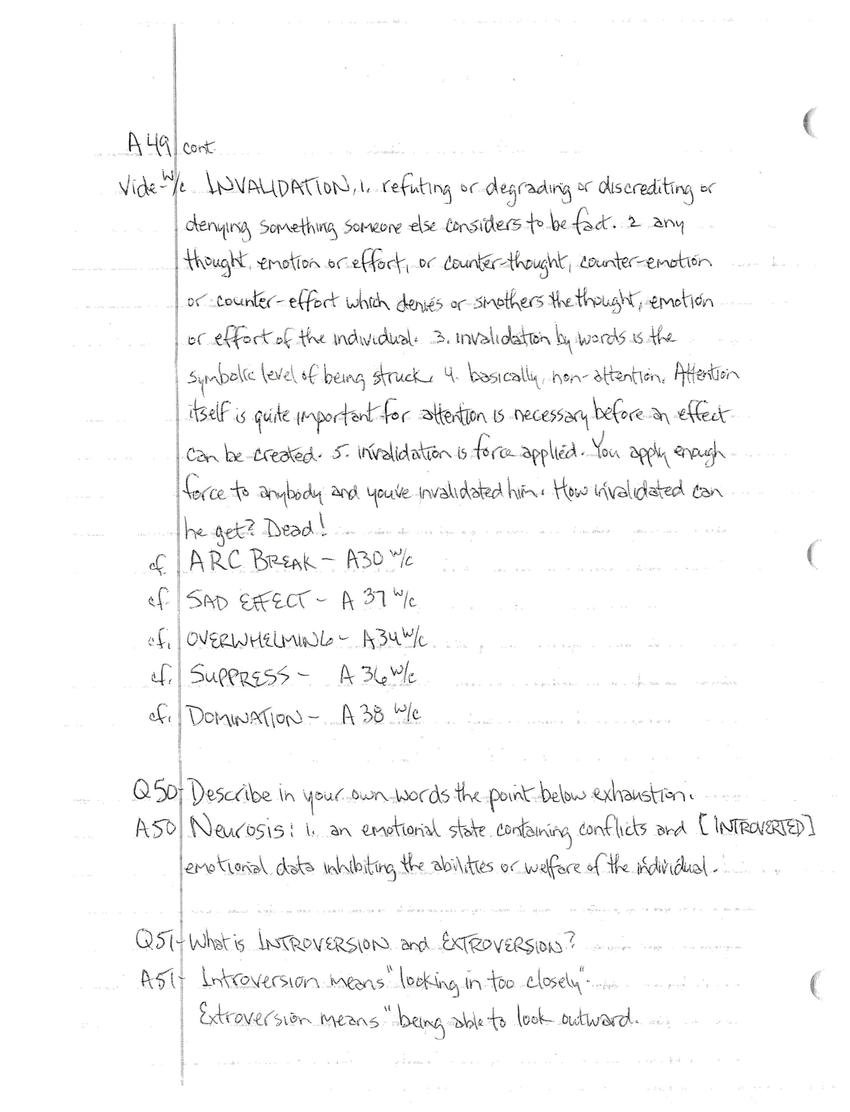 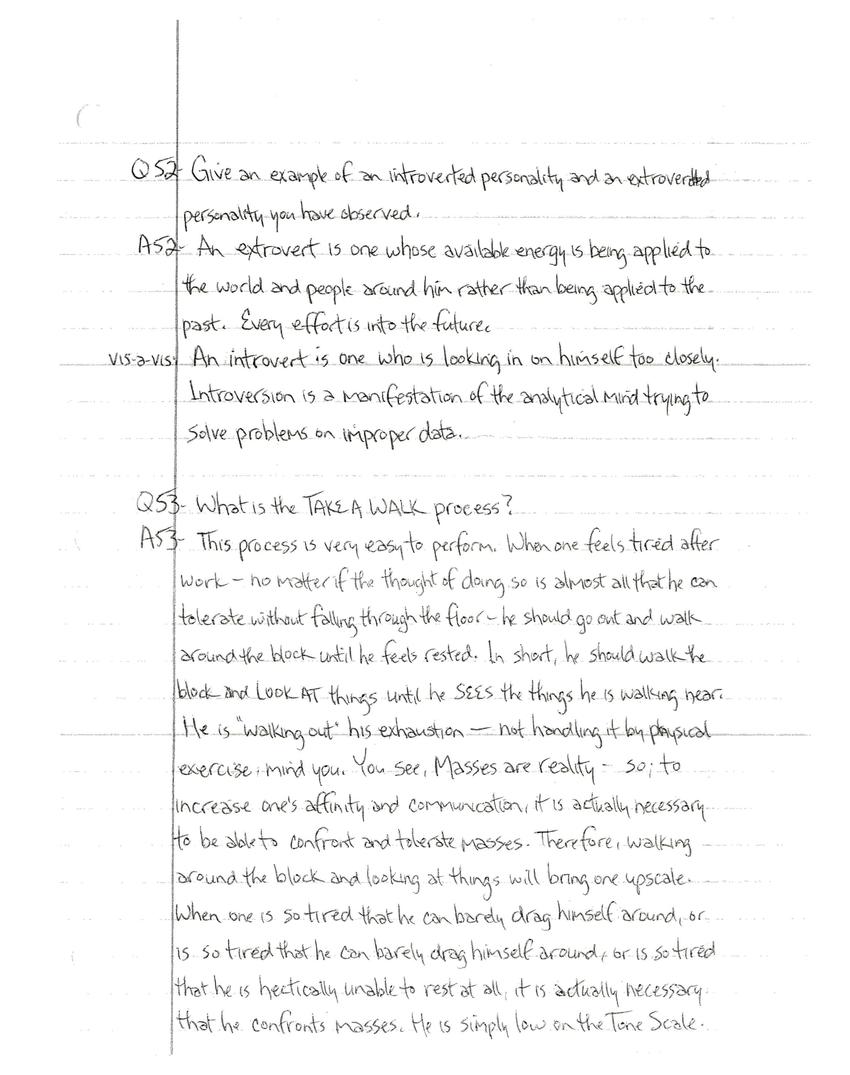 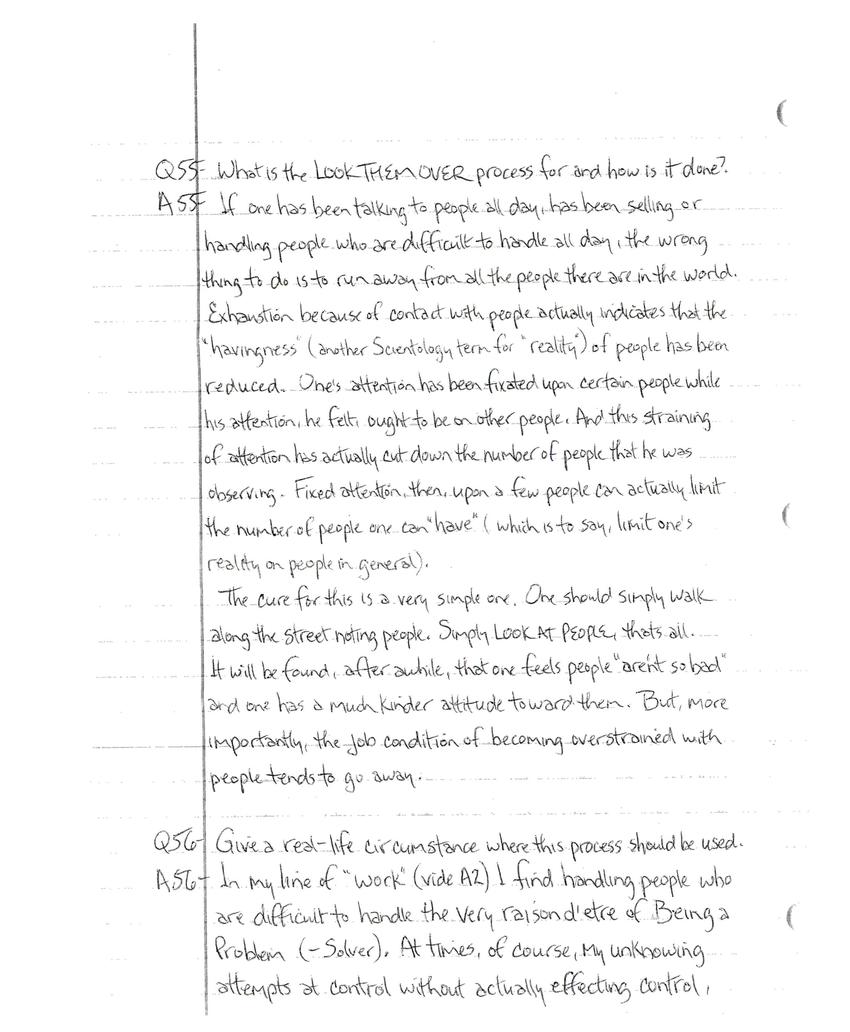 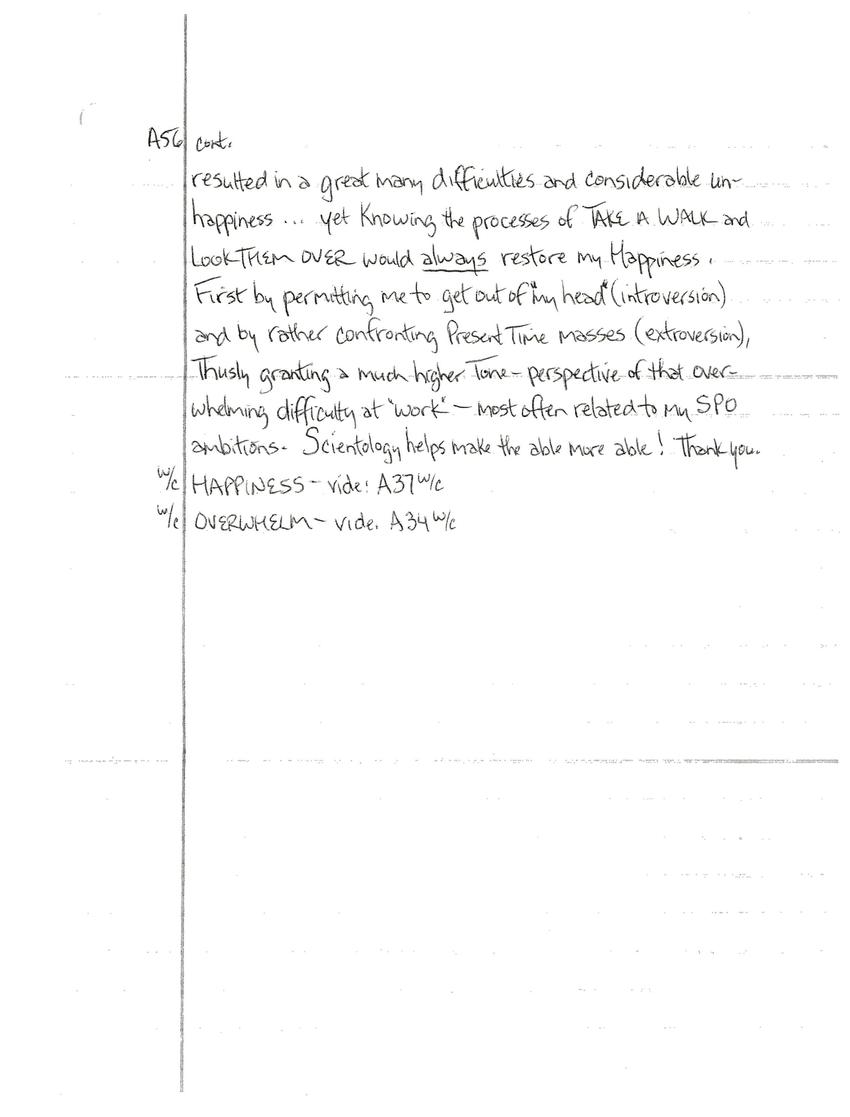 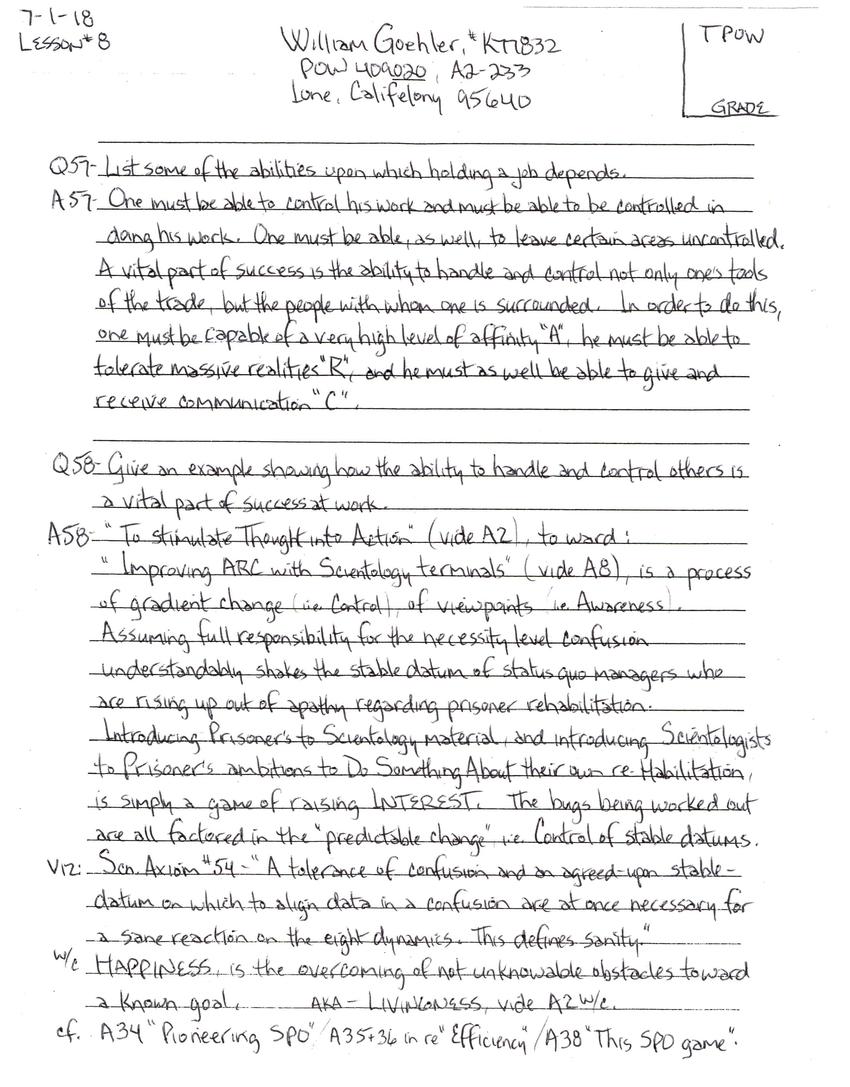 Q49- What is chronic exhaustion?
A49- Technically, in Scientology, it is discovered that there is no such thing as a "gradual diminishing, by continuing contact, of the energy of an individual." One does not become exhausted simply because one has worked too long or too hard. One becomes exhausted when he has worked sufficiently long to restimulate some old injury. One of the characteristics of this injury will be "exhaustion." Chronic exhaustion, then, is not the product of long hours or arduous application. It is the product of the accumulation of the shocks and injuries incident to life - which eventually mounts up to a complete inability to do anything. Exhaustion can, then, be trained into a person by [stopping] refusing to allow him to have any [influence] part of the society. Or it can be beaten into a person by [invalidation] the various injuries or shocks he may receive incident to his particular activity. You see, Degradation is a harmonic of Exhaustion - just above Death, according to the SCALE OF SLEEP lecture 7/31/57.
V12: Alas, viewpoints consider more and more that the dimension points are valuable. And the viewpoints try to become the anchor points and forget that they can create more points and space and forms. Thus come about scarcity. And the dimension points can persih and so the viewpoints assume they, too, can perish. Thus comes about death. - The Factors #24-#25.
A49 cont.
Vide- w/c INVALIDATION,?, refuting or degrading or discrediting or denying something someone else considers to be fact. 2 any thought, emotion or effort, or counter-thought, counter-emotion or effort of the individual. 3. invalidation by words is the symbolic level of being struck. 4. basically, non-attention. Attention itself is quite important for attention is necessary before an effect can be created. 5. invalidation is force applied. You apply enough force to anybody and you've invalidated him. How invalidated can he get? Dead!
cf. ARC Break - A30 w/c
cf. SAD EFFECT - A36 w/c
cf. OVERWHELMING - A34 w/c
cf SUPPRESS - A36 w/c
cf DOMINATION - A38 w/c

Q50 - Describe in your own words the point below exhaustion.
A50 Neurosis: 1. an emotional state containing conflicts and [INTROVERTED] emotional data inhibiting the abilities or welfare of the individual.

Q52 - Give an example of an introverted personality and an extroverted personality you have observed.
A52 - An extrovert is one whose available energy is being applied to the world and people around him rather than being applied to the past. Every effort is into the future.
vis-a-vis: An introvert is one who is looking in on himself too closely. Introversion is a manifestation of the analytical mind trying to solve problems on improper data.